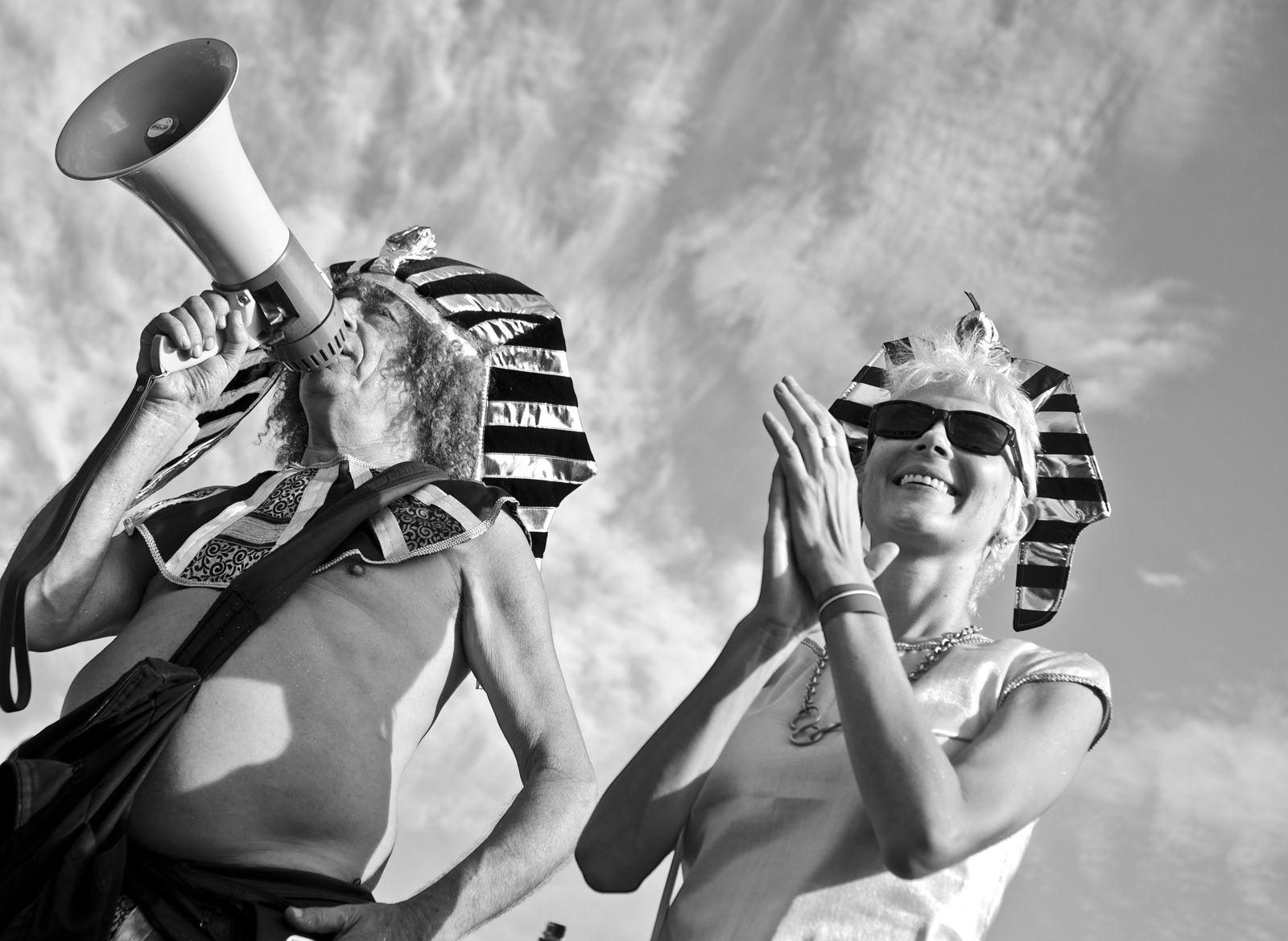 Every year in February on the coast of Arabian Sea in Goa on the beach of Arambol a mysterious event for local police takes place. It is nothing less than the world-famous Freak Parade governed by its founder and organizer, Belgium clown Zou-Zou, who is still quite perky despite no longer being very young.

The topic of parade is announced before, but the date and time remain secret for everyone until the last moment. Beforehand, you know only rumored data with just enough information to determine the week of the event. This is so that freaks from all over the world can buy tickets for flights for reasonable prices to India and get acclimated there, in order not to become ill for the special occasion and to have time to check the place out. This measure is used to prevent Goa police from being able to mobilize their forces and stop the festivities, because they might reason, “We need to prevent these crazies from doing something bad, like going to the beach naked,” which actually happened several years ago for creation of needed intrigue. 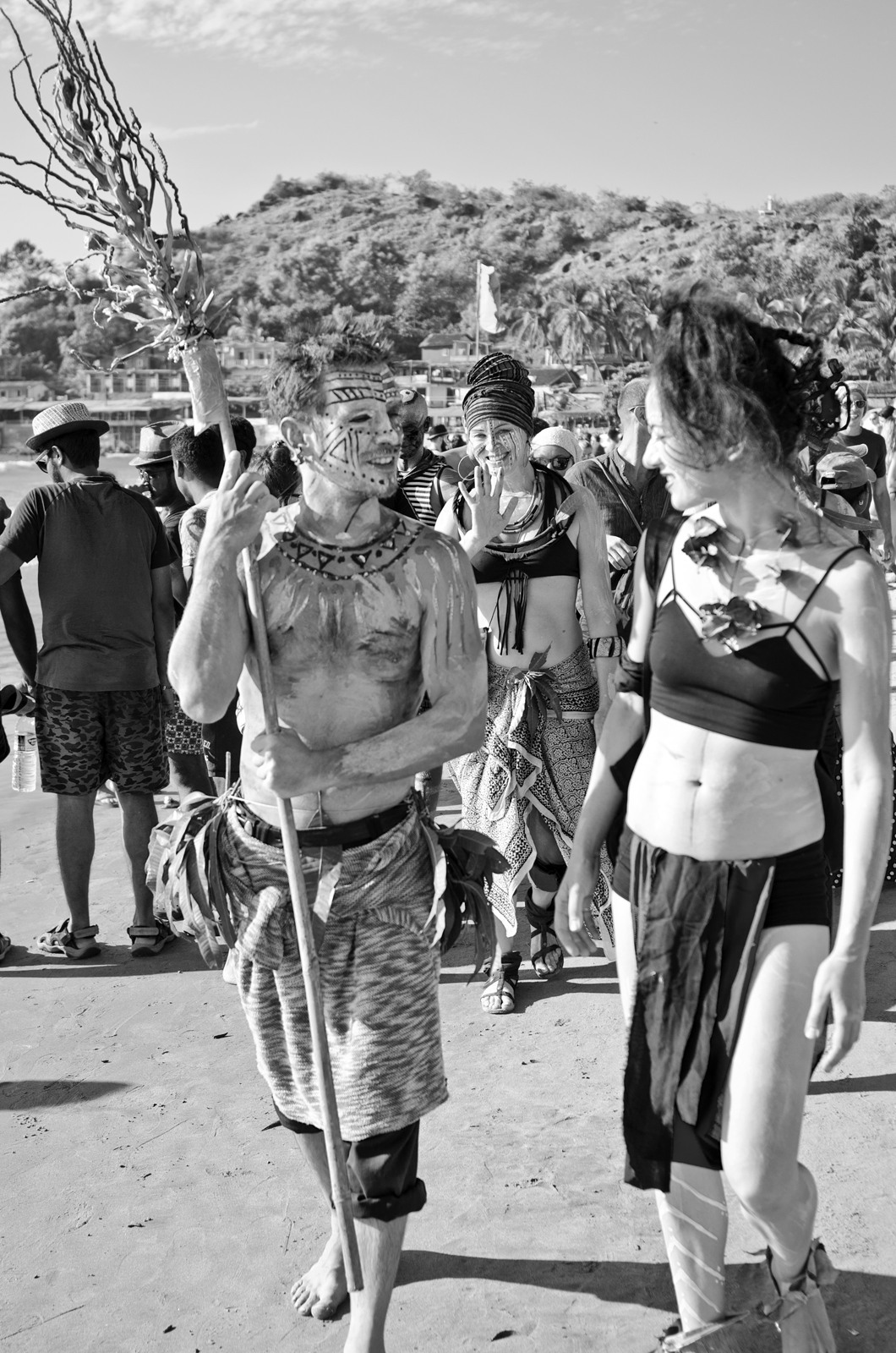 The topic of the carnival this year was named “Ancient Cultures,” and the parade happened on the 8th of February. The organizer of the flash mob with her young companion were dressed as Egyptian Pharaohs. She smiled in a shy manner to everybody around her, and he, having a megaphone in hand, commanded a squad of musicians in a brass and drum section. As these events were unfolding, “slaves” were dragging a chariot on which there was a huge ball resembling planet Earth and crowds of participants were shouting an appeal: “Let’s dance, let’s dance!”, while at the same time, the organizers were trying not to fall down into this crowd.

History cannot give an exact answer as to when the first parade was held. Supposedly, it was in the now distant year of 2003. The period is not that small. Consequently, the parade aims for ancient cultural phenomena status and it is no surprise to meet a freak masked as a father of this event, in accordance with the topic. Silhouettes in a toupee with long, curly hair are a common sight.

Arambol is an Indian Mecca, where during every season many unordinary, creative and special people flock. Arambol is a place on the map which is well-known to every freak on Earth; the place where they placed a bet. When life in the big cities of our global and standardized world becomes cramped and unbearable, when the level of their incomprehensibility and criticism on behalf of colleagues and citizens becomes unbearable and the air in their office becomes as stale and stuffy as a prison cell – they will run here for freedom to the village Arambol. They are coming here with following words: “Home, sweet home”, even if they come for the first time. 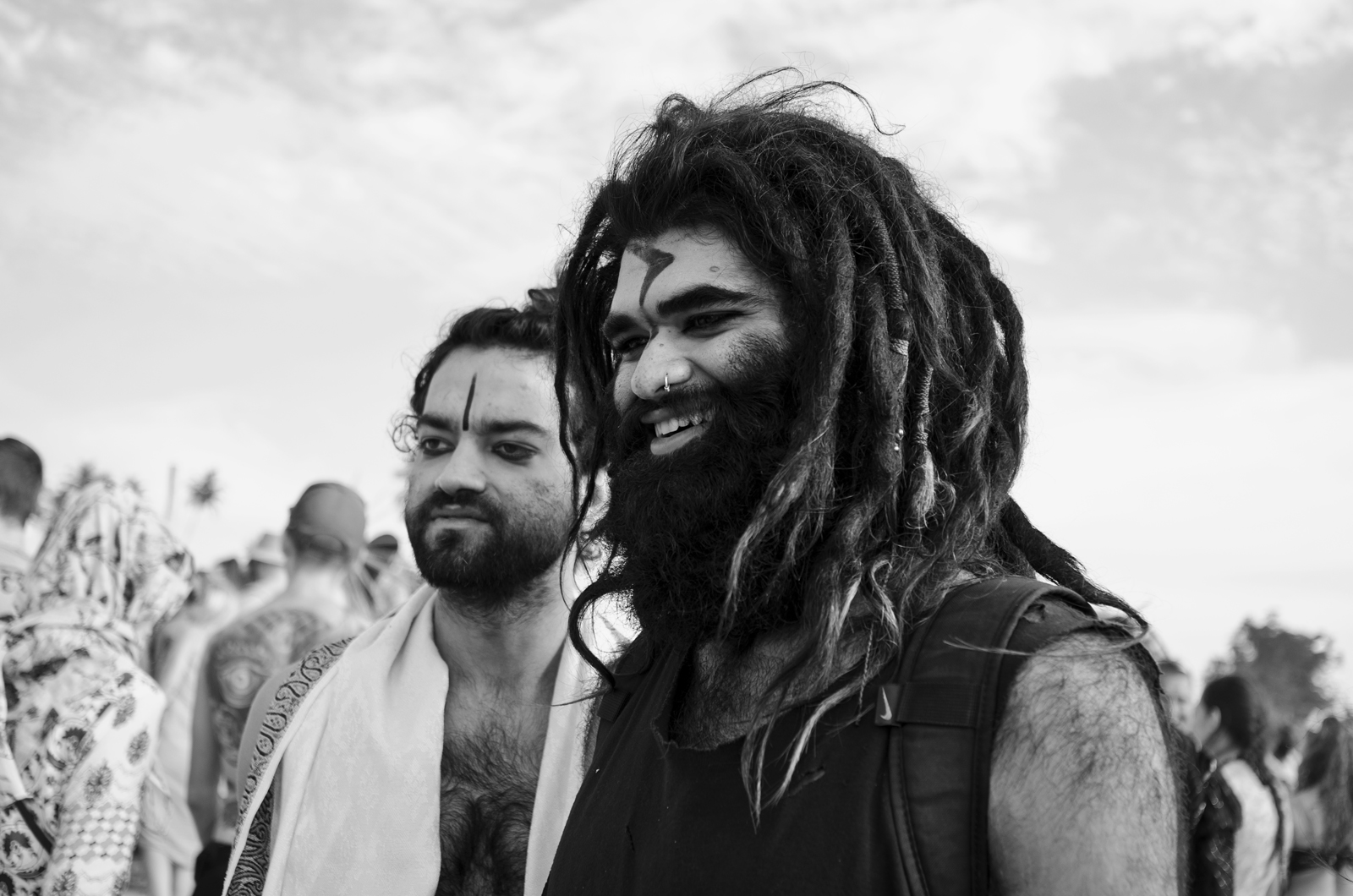 This is the place where the spirit of freedom loving and non-standard creative and bright personality gains harmony and revival. Here, it can be felt as a part of a charming context, a context which was founded by hippies who have been liking this place since the 1970s and a context that was blessed by the performers from the band Beatles. Ever since those days, there is a transmission of the idea of freedom and extraordinariness through the generations starting from hippies to junkies, from junkies to transfers and further on to downshifters and now to the hipsters. 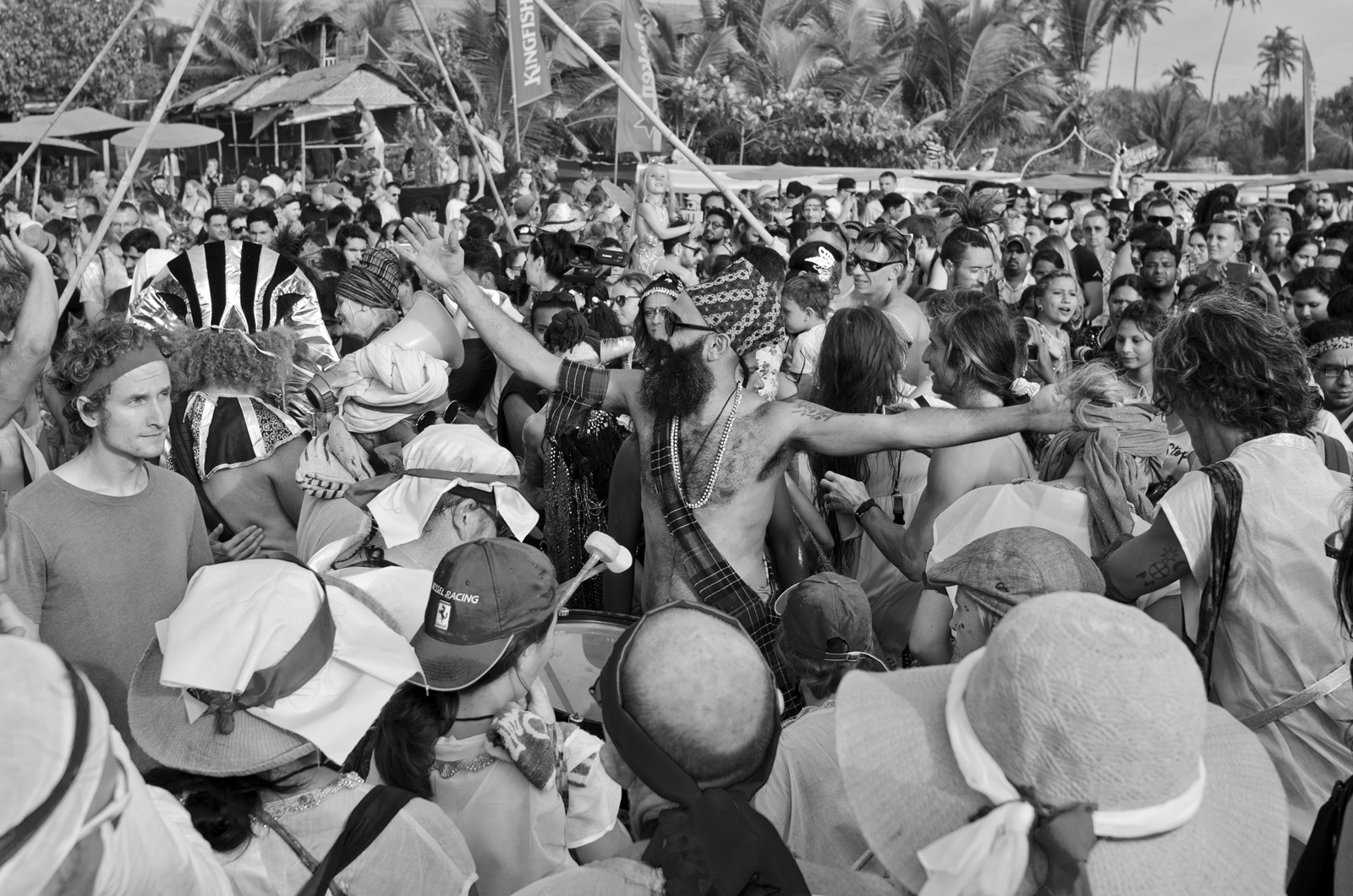 This entire story happens in front of local fishing settlements, whose residents are accustomed to such existence during several generations. They got used to such neighbors during their weekdays that are sneaking around the beaches in big crowds, modern relaxed hippies. The eye of local residents is already accustomed to the permanent presence of exotic personalities in their surroundings and they are not amazed to see the rage of chaos, the beauty of self-expression of crowd and the separate people starting with the serene teenager getting stoned from the smoking blunt with an extraordinary haircut and finishing with the bold man who is concentrated on balancing a glass ball on his head. All of this is voiced everywhere with unbelievable sounds of all of kinds of exotic musical instruments which is a way of self-expression for many musicians who are present there as well. 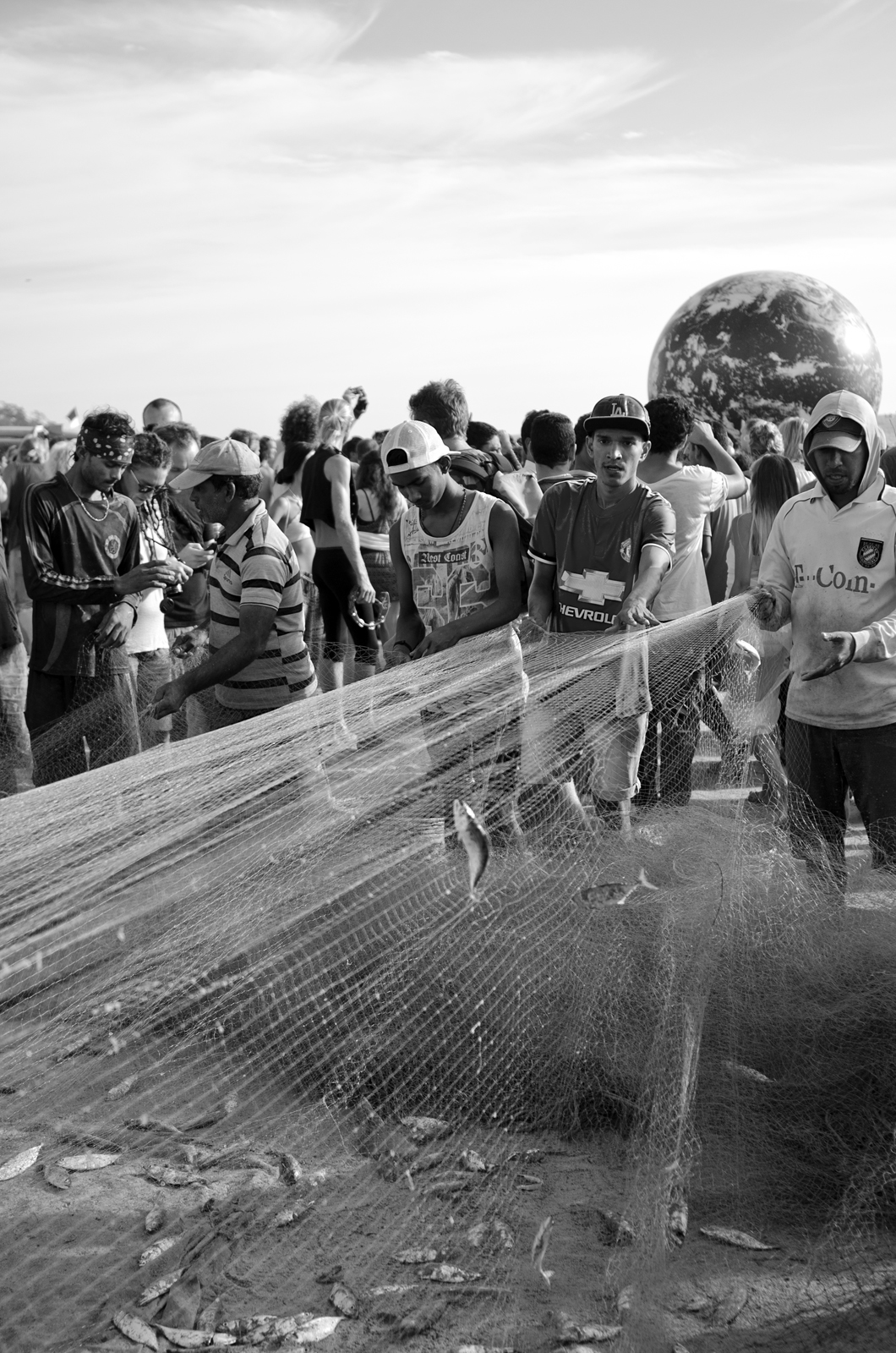 Basically, even every simple day is a certain Freak Parade. Freak Parade is a local routine by default. While you are thinking about it, the question arises: Is it easy to be a freak in Northern Goa? Being a freak on purpose carries a certain idea. The Freak Parade, celebrates the background of freaks. Would it be the same to start a demonstration of individuality in the deep forest? The question remains open.

Freak Parade started in the Northern beach part of Goa, at a dead end near the bar named, “This is it”. Considering the number of participants, the name of the bar was yelling, “Is it all?!” Is this one more argument in favor of that Freak Parade, which becomes a forgotten ancient culture? The number of participants could be counted by fingers on the hand. They just got lost in a crowd of spectators with phones and photographs, queuing to every freak for an Instagram photo. Spectators were tourists who came here and also Indians who came especially for the parade from other big Indian cities. Also, there were separate people who tried to join to the happening spontaneously creating the costume from the surrounding things. Cardboard boxes for example taken from the beach bar or palm leaves. This has eliminated difference between spectators and participants. 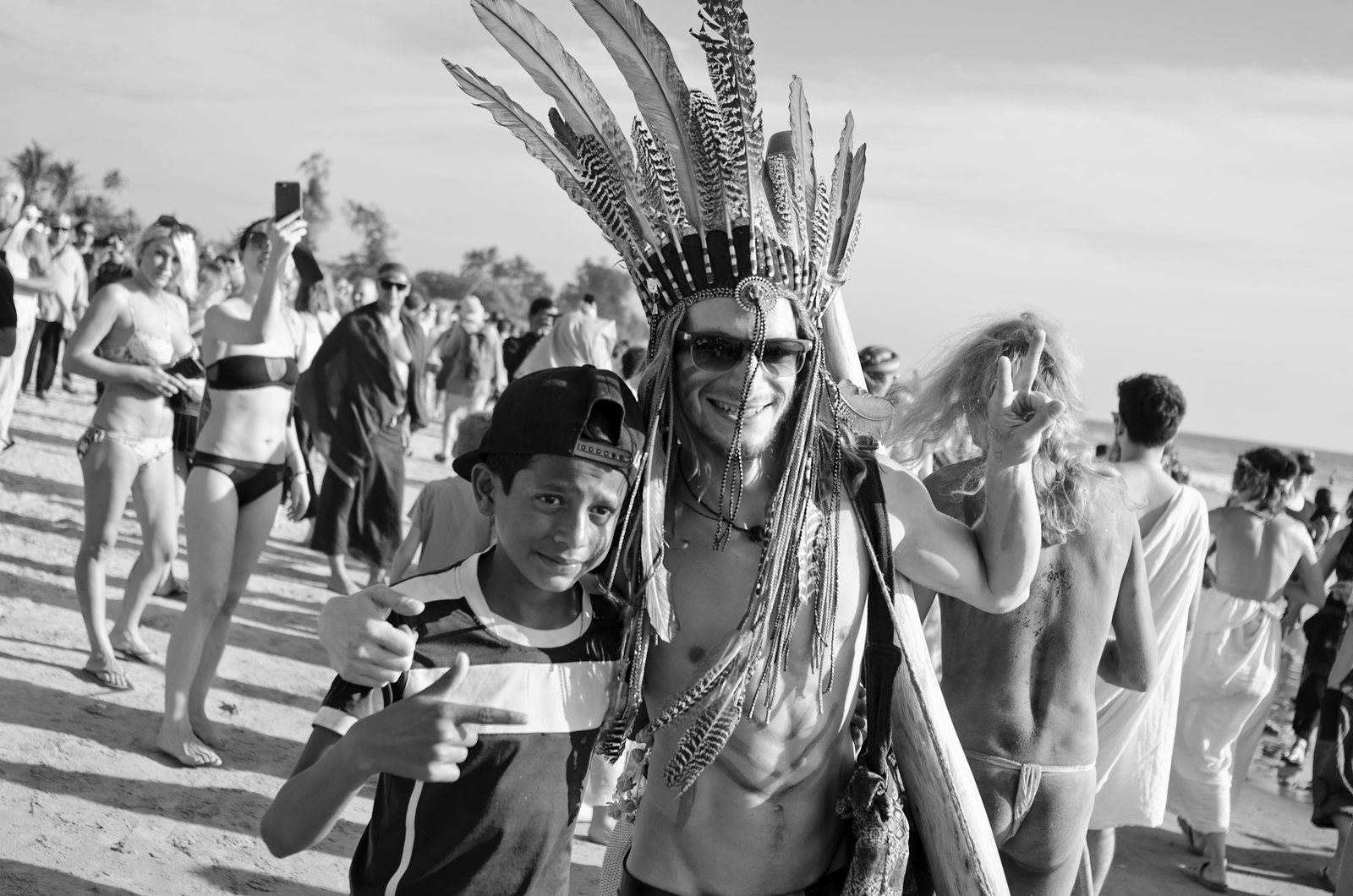 They moved slowly to the south beach, accompanied with loud drummers and the megaphone commands of clown Zou-Zou. The helicopters flew in the sky, waves moved under the legs, clicking camera shutters filming freaks. Sounding brasses and an overcrowded environment. 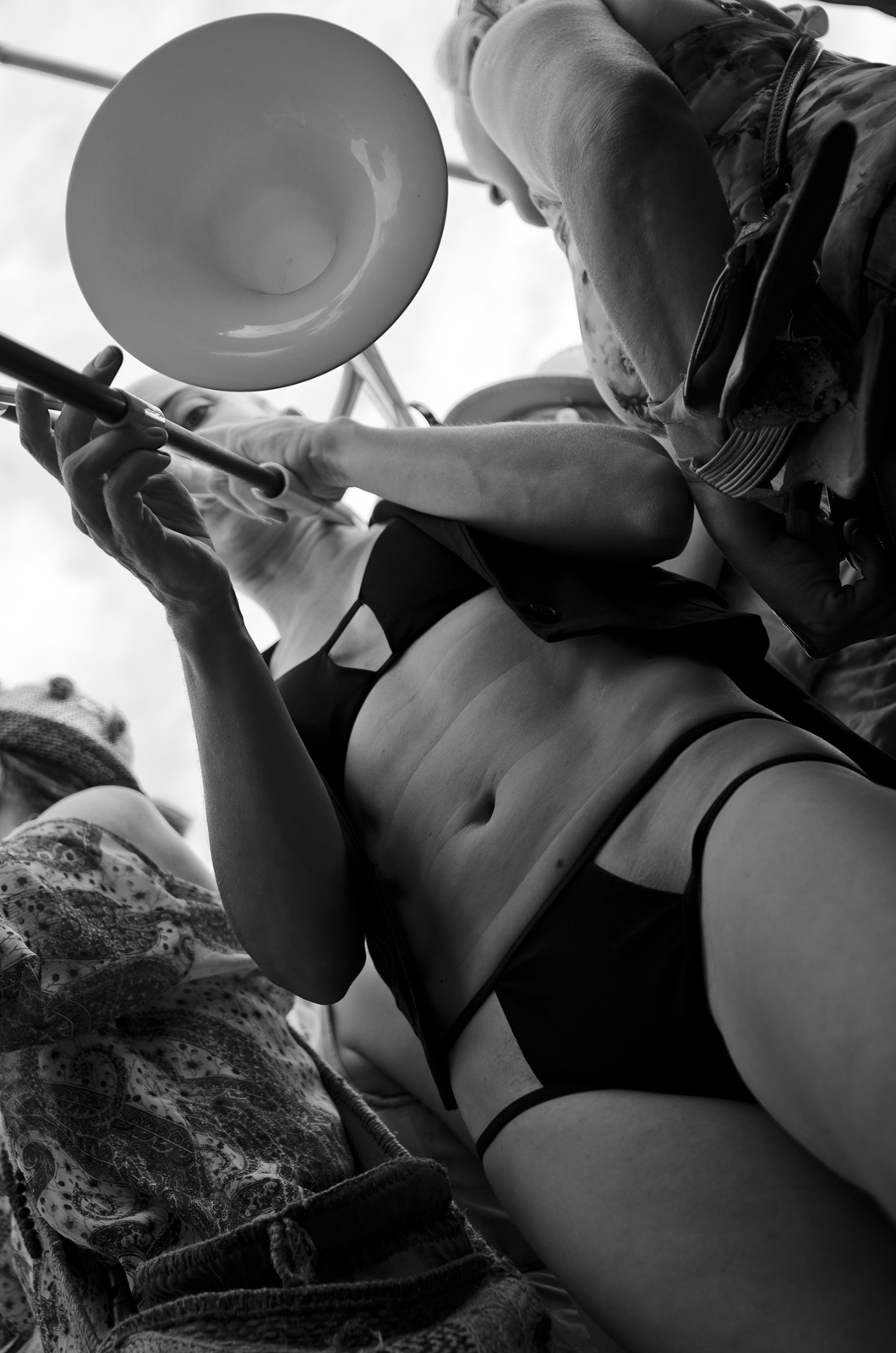 On the other hand, the Freak Parade with planned costumes and dictated dress-code in exaggerated form shows that originals, which can be seen on the beach every day, can also be as a result of chosen image. And again the question: Is it easy to be a freak in Northern Goa?

Sometimes carnival stopped at certain points of the beach where additional participants joined in, demonstrating performances. Native Indian dances, for example, were performed by kids and capoeira fighters sparring against each other going along with the parade. 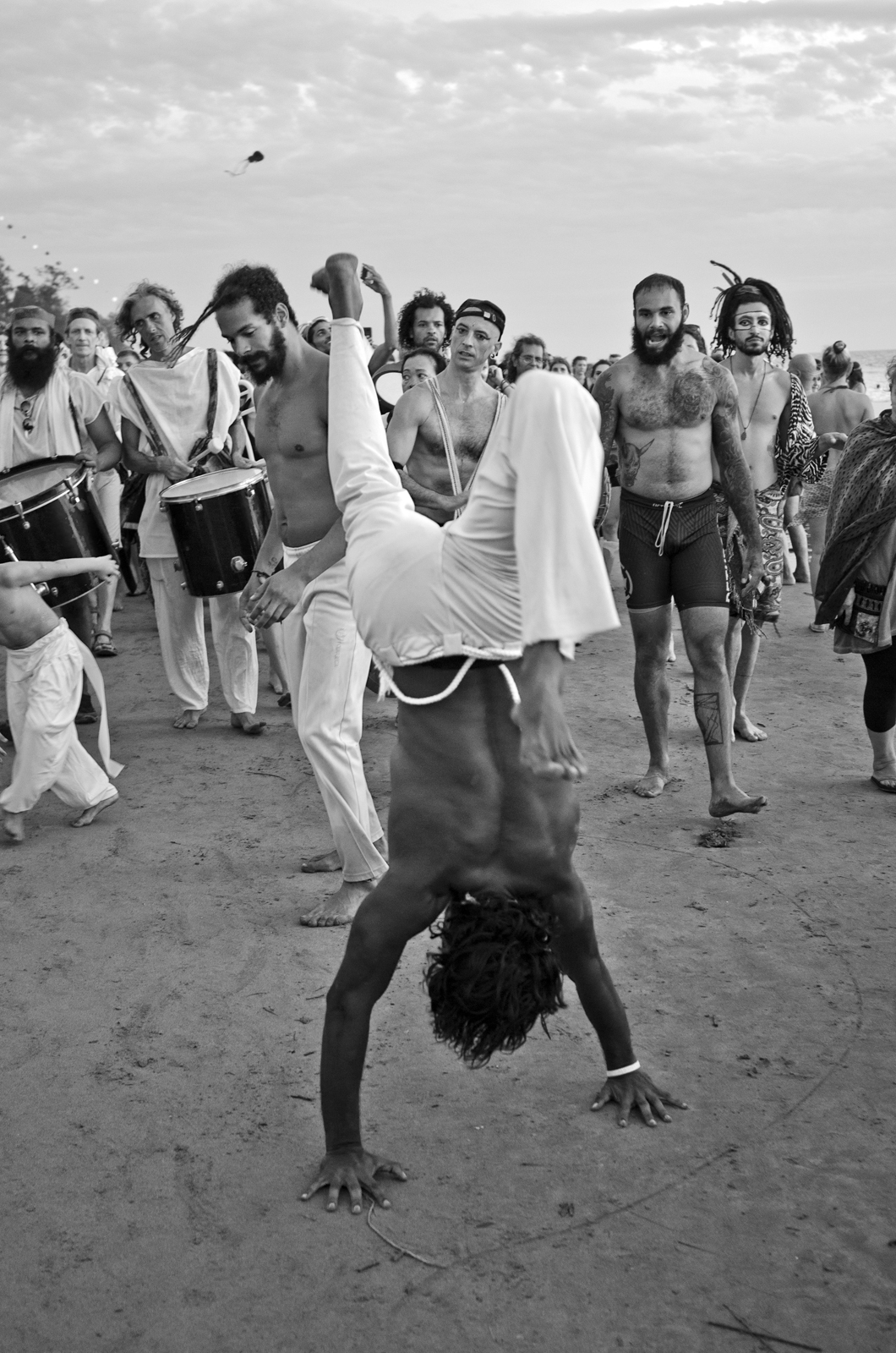 Reaching the point, the carnival turned back and went to the bar named “This is it”. This part was accompanied by the descending sun, and the Earth transported by the chariot closed the light creating an eclipse and casting the shadow to the audience. Organizers were nervous, participants moved quickly, frightened because the carnival was not to finish until the dark. 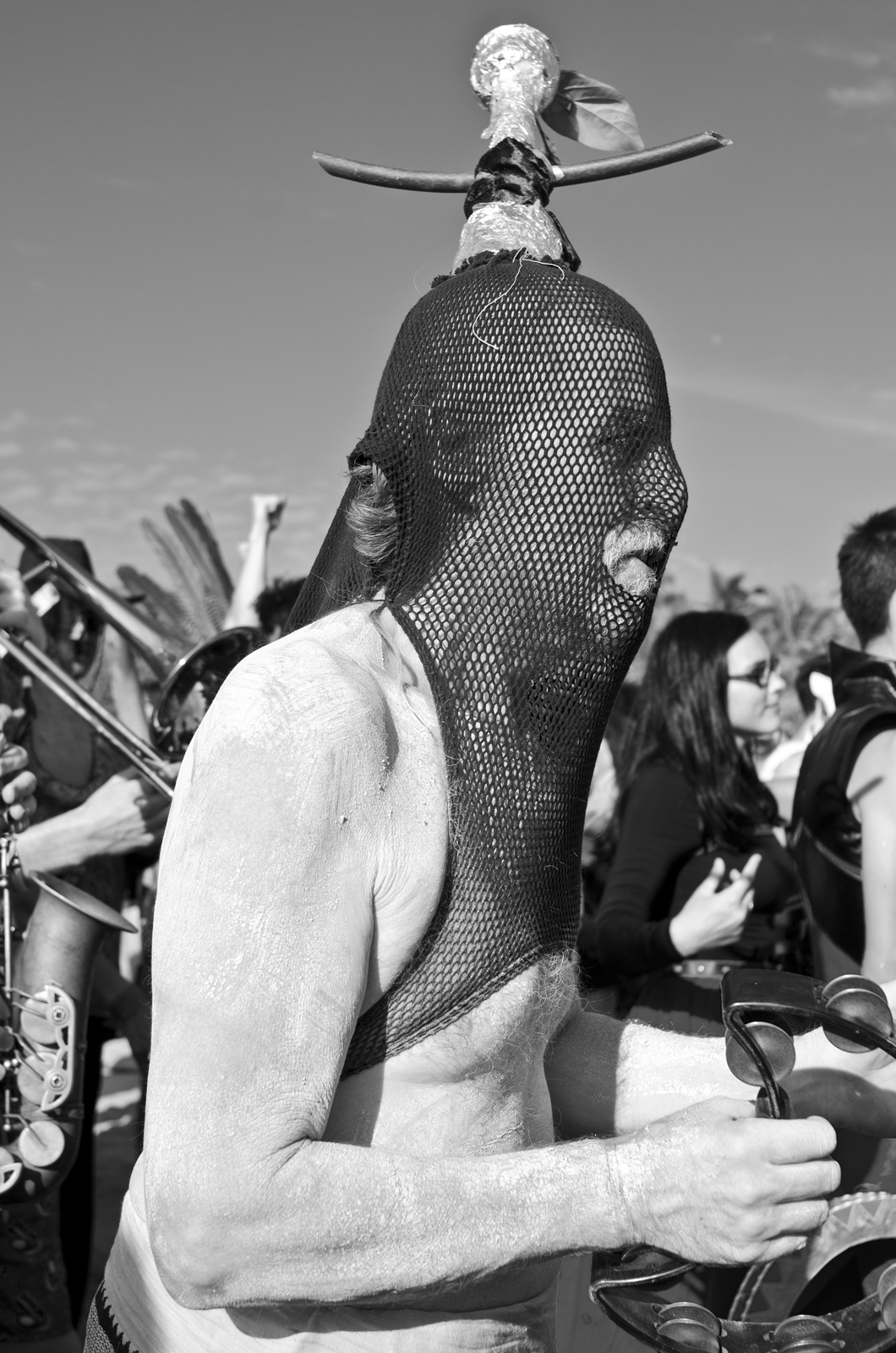 The air cooled down as the enthusiasm of Zou-Zou became less heard. His commands became rarer as if he was satisfied with the event, as if he had gotten the portion of calories he needed to make it through the upcoming year, until the next meetings with the like-minded. It looked like they had got what they wanted. Who knows? Perhaps he arranged this Freak Parade to get young energy for his longevity. His initiative was taken by the main drummer who governed the movement at the final stage.

From this moment the number of marching on the beach started to decrease, some went home, some continued the celebration, drinking in the bars.

The event of this day happened among the fishermen working on the beach who didn’t care about the event. They cleaned nets and even did not turn to look at where the sounds of drums and brasses were coming from. The children of fishermen, however, were a different story. Boys and girls looked on with great interest, and with enthusiasm they ran after the carnival searching for the best vantage point trying to get as high as possible in order not to miss anything. And at every turn they pointed their fingers at something and couldn’t stop mentioning the emotions each scene evoked, interrupting each other. This is the strongest point in favor of a successful Freak Parade! 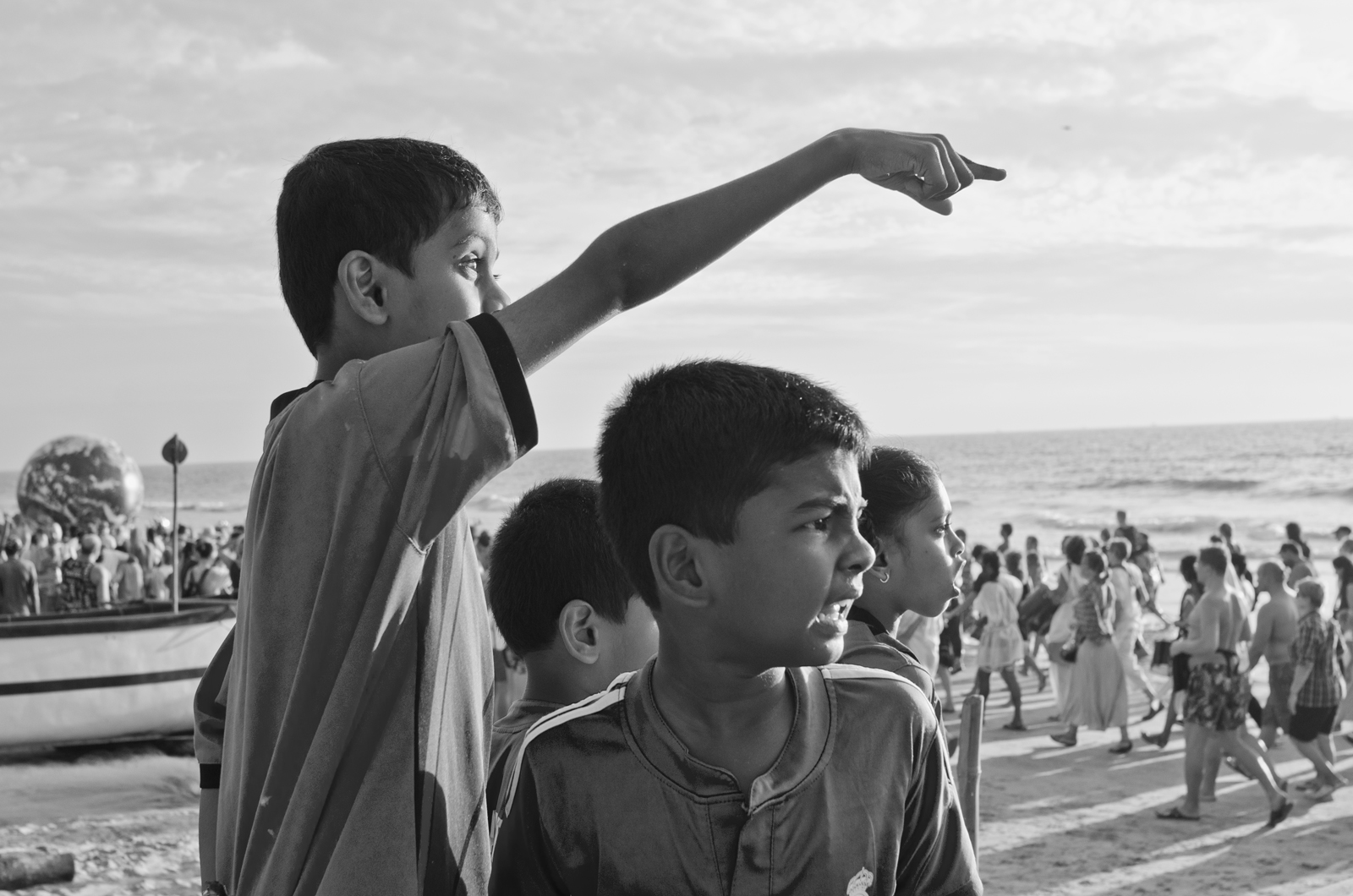 P.S. There was not one police officer present at the parade.