In this month’s issue, we sat down with Glen Cameron, a photographer who has been taking photos for decades. Glen started out working for a newspaper when he was 15 years old and while he was there, he noticed the guys who ran around with a camera around their neck and that was that. Glen picked up a camera, taught himself to shoot and has been shooting ever since. Needless to say, over the years he has collected his share of stories. We talked about a wide range of subjects, including how photography has evolved over the years and how street photography reignited his passion for photography.

A Selection of Glen’s Photos 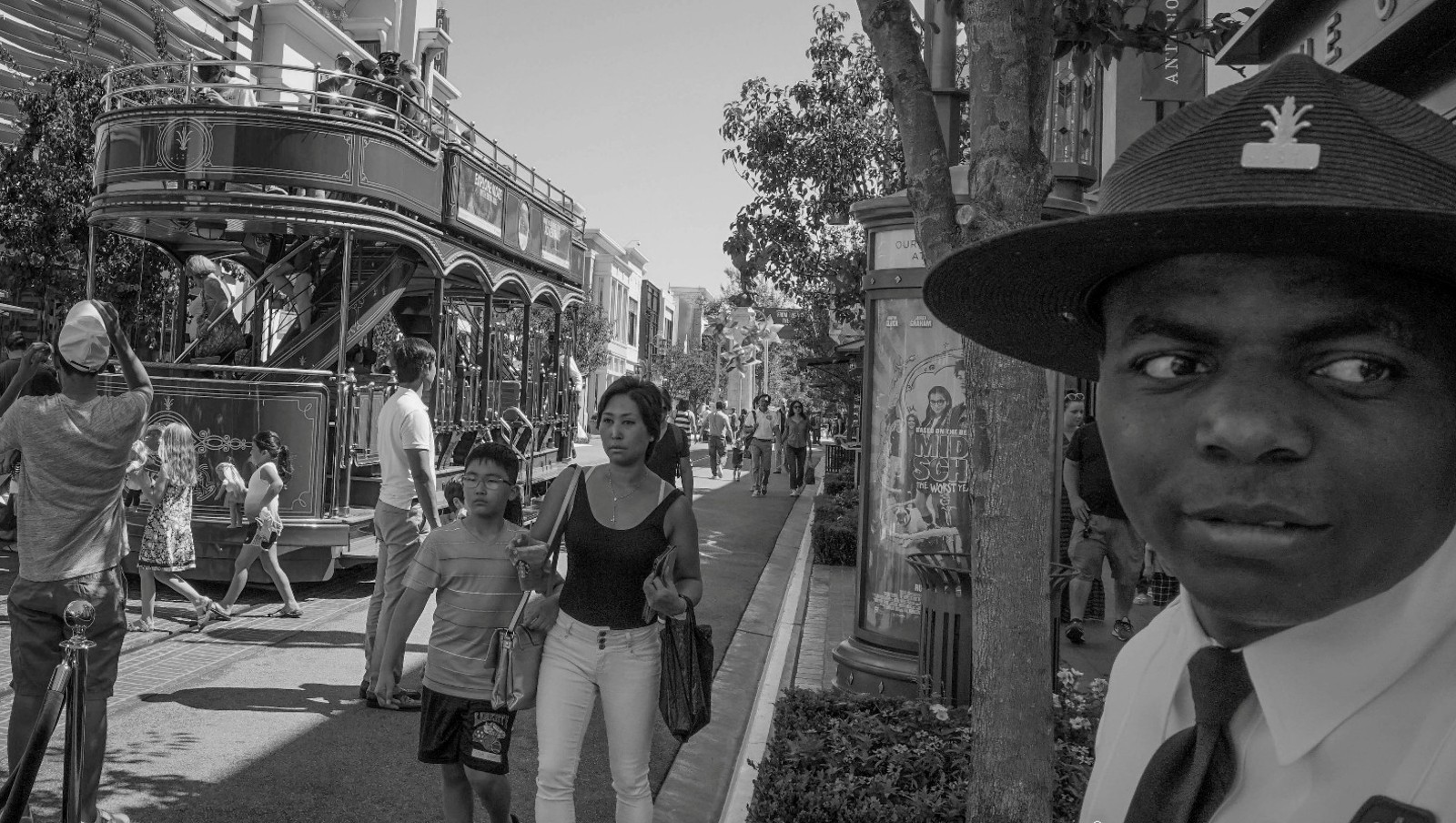 USA Farmers Market
I used to go to Farmers Market in LA for the Mexican breakfasts. After that, the day went downhill quite quickly as it was too touristy for me. I was watching the street car and spoke almost into this security guys ear. In anticipation of his turning around I stepped to one side. He still does not know I took his photograph. 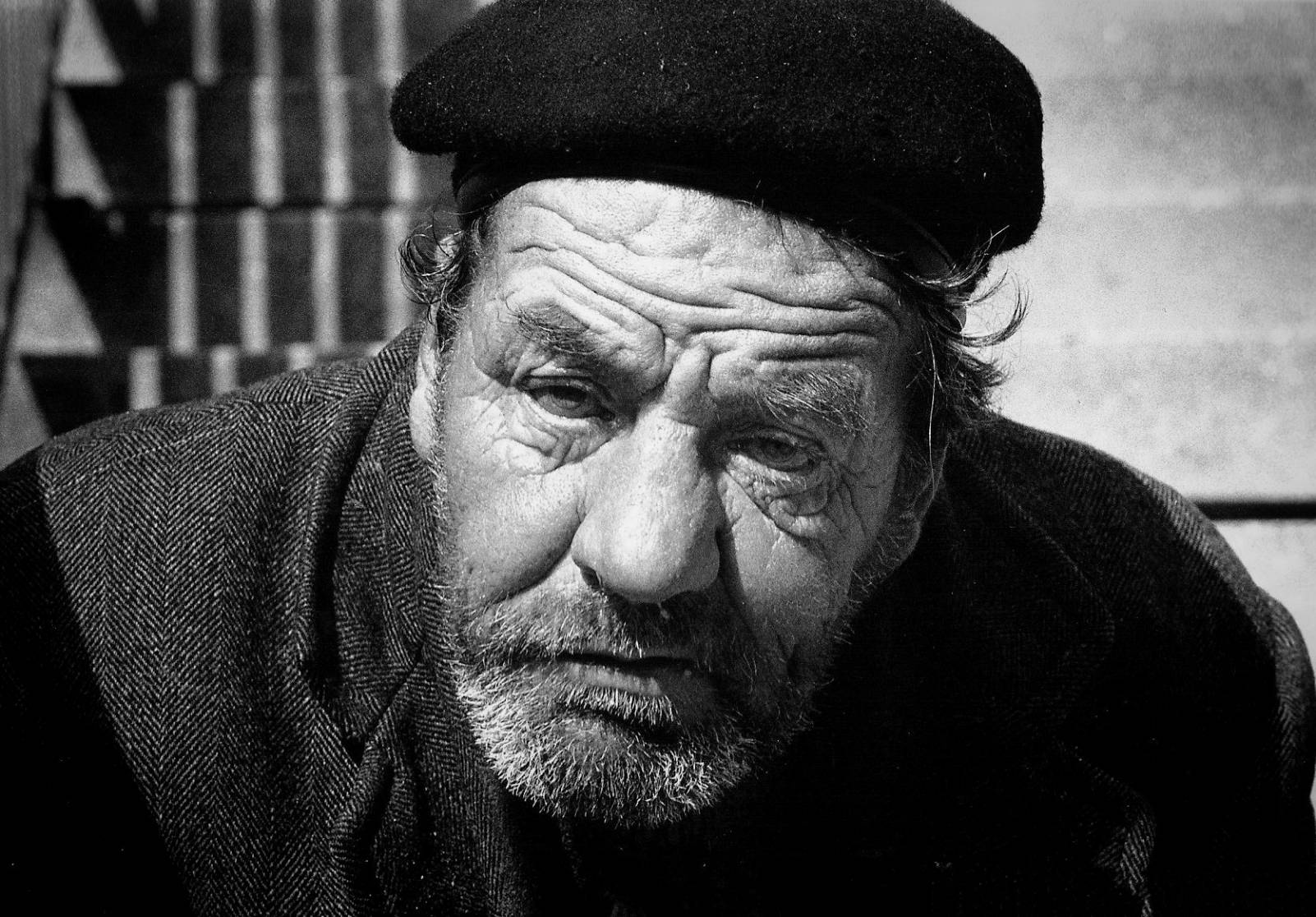 UK Liverpool
This man was dosing on the steps of a cathedral when I approached him he looked up directly at me. Two quick pics. First frame blurred. He asked me for the equivalent of 50c. I said no. I regretted saying that soon after and still do to this day. 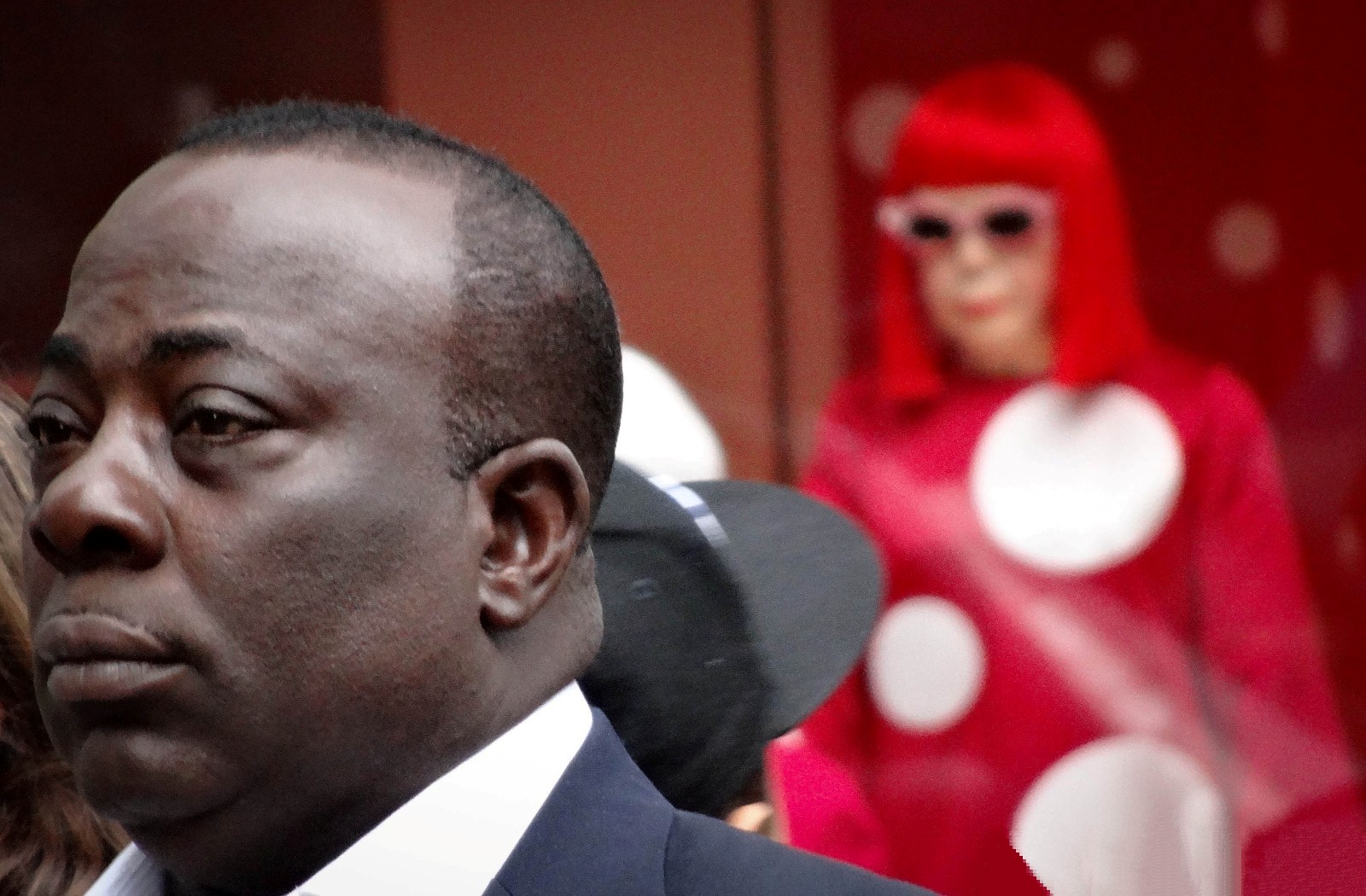 UK Invader
An eye catching store mannequin. I was looking how to improve on this and then noted this gentleman headed my way. Busy street and possibly one quick shot at it. I stepped back to let the gentleman walk between the mannequin and myself. Happily for me most of the other pedestrians walked around me, except the subject. One pic. 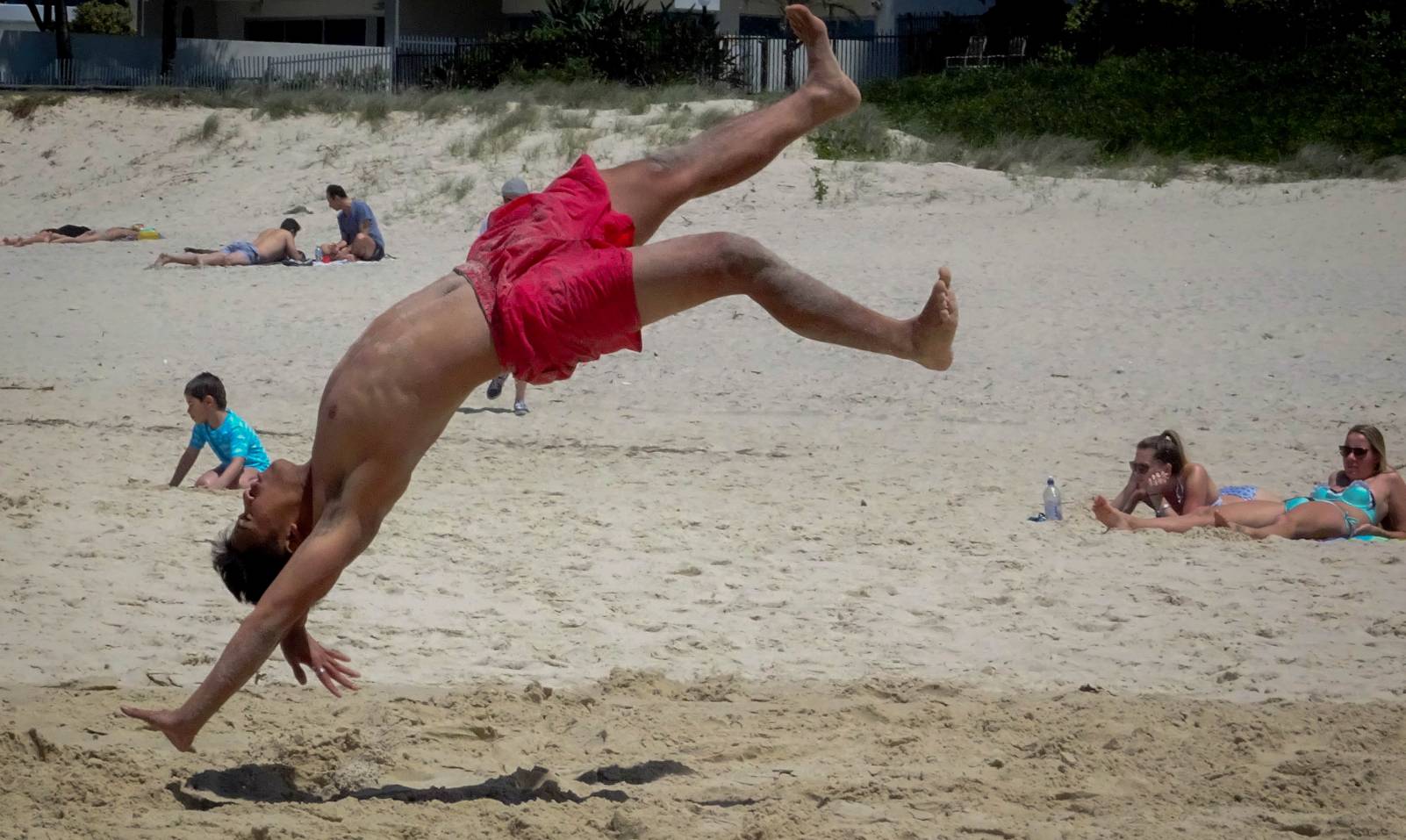 OZ Beach Show Off…Not
Heading home I was aware of this young guy doing athletic things and as I drew closer he did a cartwheel. Later I noticed the disinterested looks on the girls. 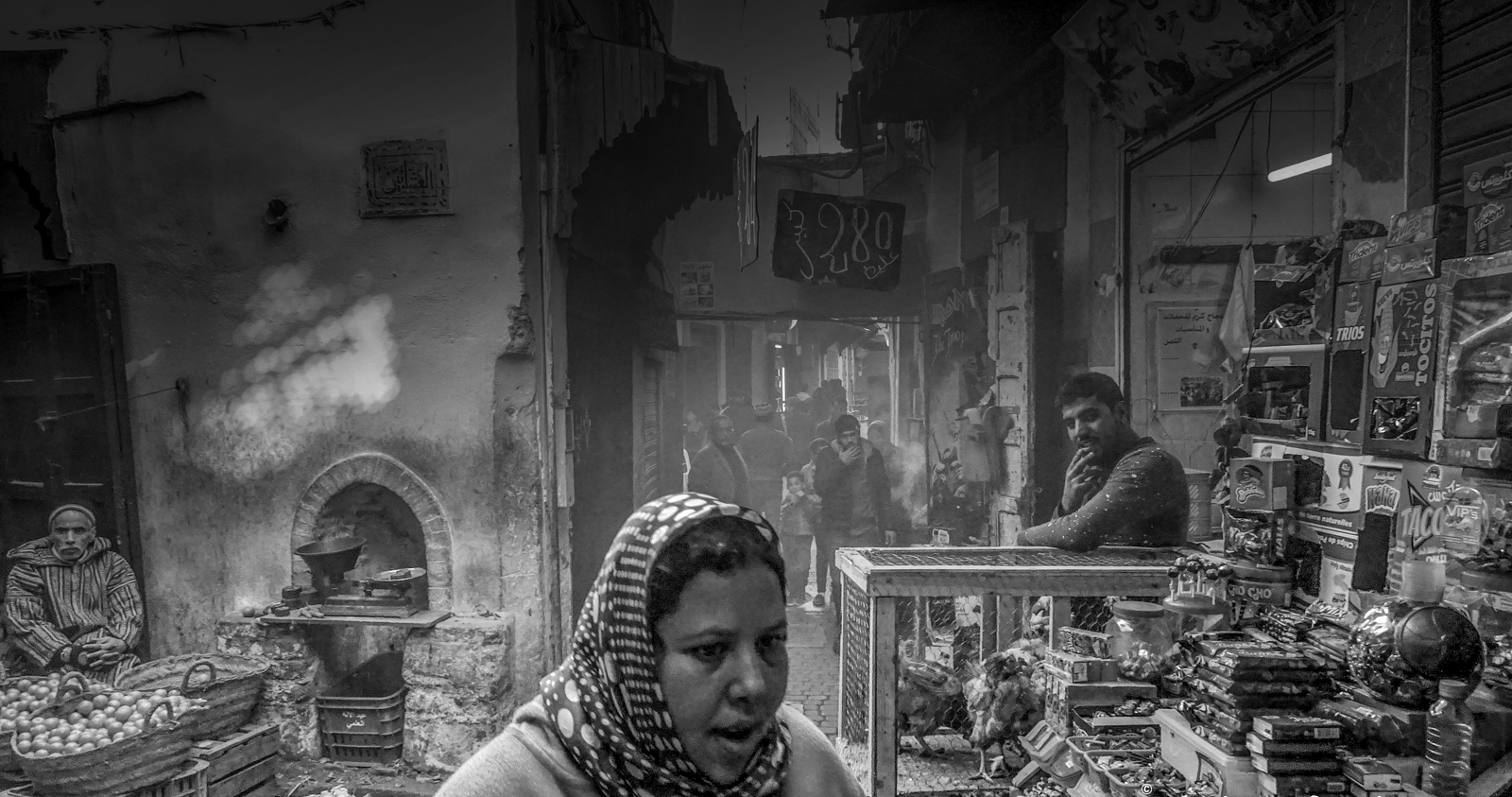 MOROCCO Essaouira People in Street
Another city full of chances for a good photograph. An ancient city with a dusty street through the middle. I was drawn to the three styles of clothing. I also dropped my camera in the dirt soon after the pic. 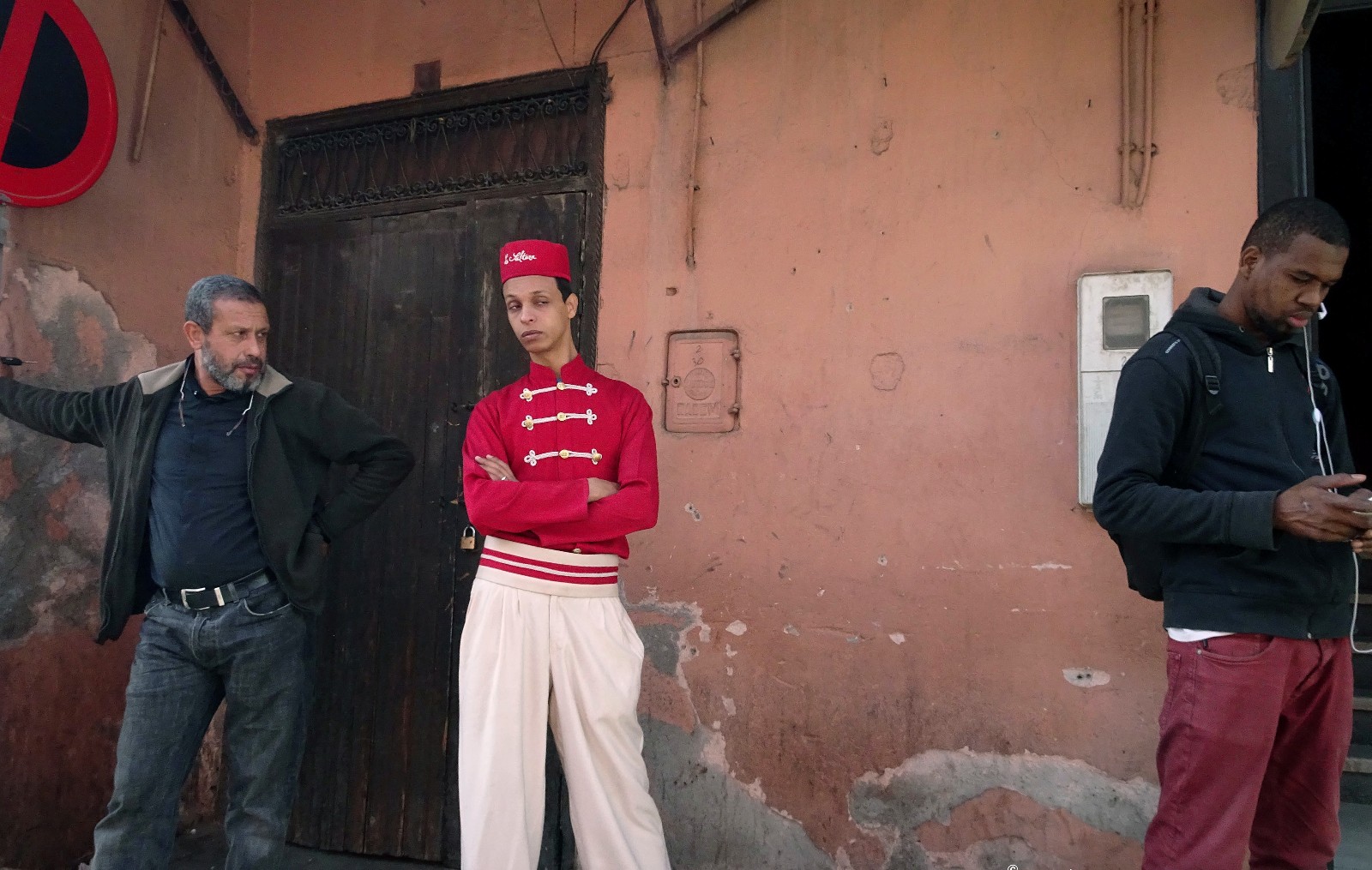 MOROCCO Doorman
Morocco being so colourful I was not too surprised to see this type of photographic opportunity even though it was taken from a tourist horse and carriage passing him by…As usual…thankfully the camera was at the ready. 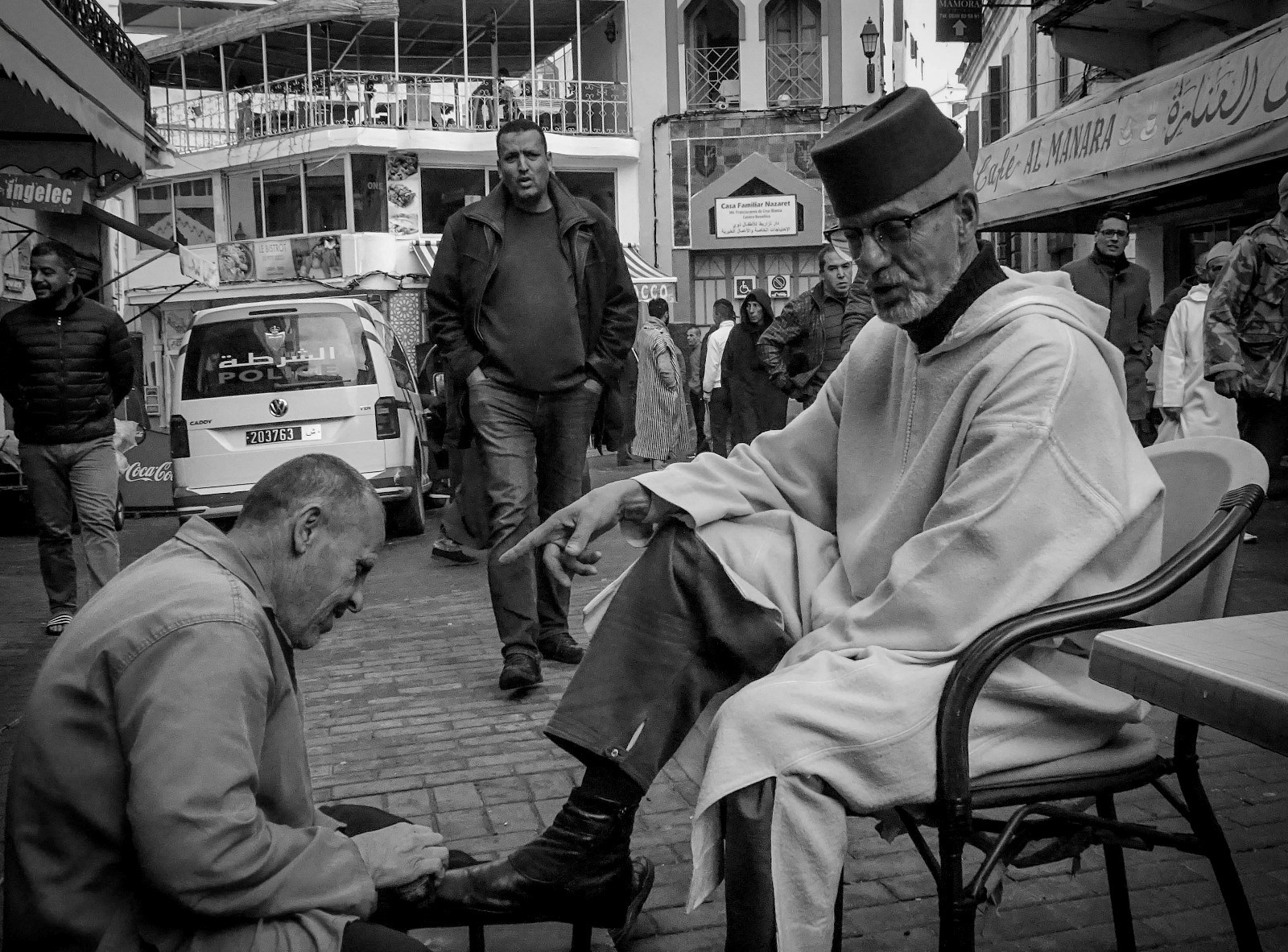 MOROCCO Shoe Shine
How impeccable this man was in his white attire and fez hat. Not only that, it was his booming voice that caught my attention. As is my way I followed him until he stopped for a shoe shine. As usual the streets were crowded and I had to seize the moment. Within seconds of taking his picture, the streets erupted with noise and I became fearful, then I saw a wailing crowd following a coffin through the streets as is the custom. Another photo taken.

FRANCE Soldier
I am not sure if it was his ill fitting beret or the expression of those around this soldier as he moved amongst the crowd. Nevertheless I moved in. 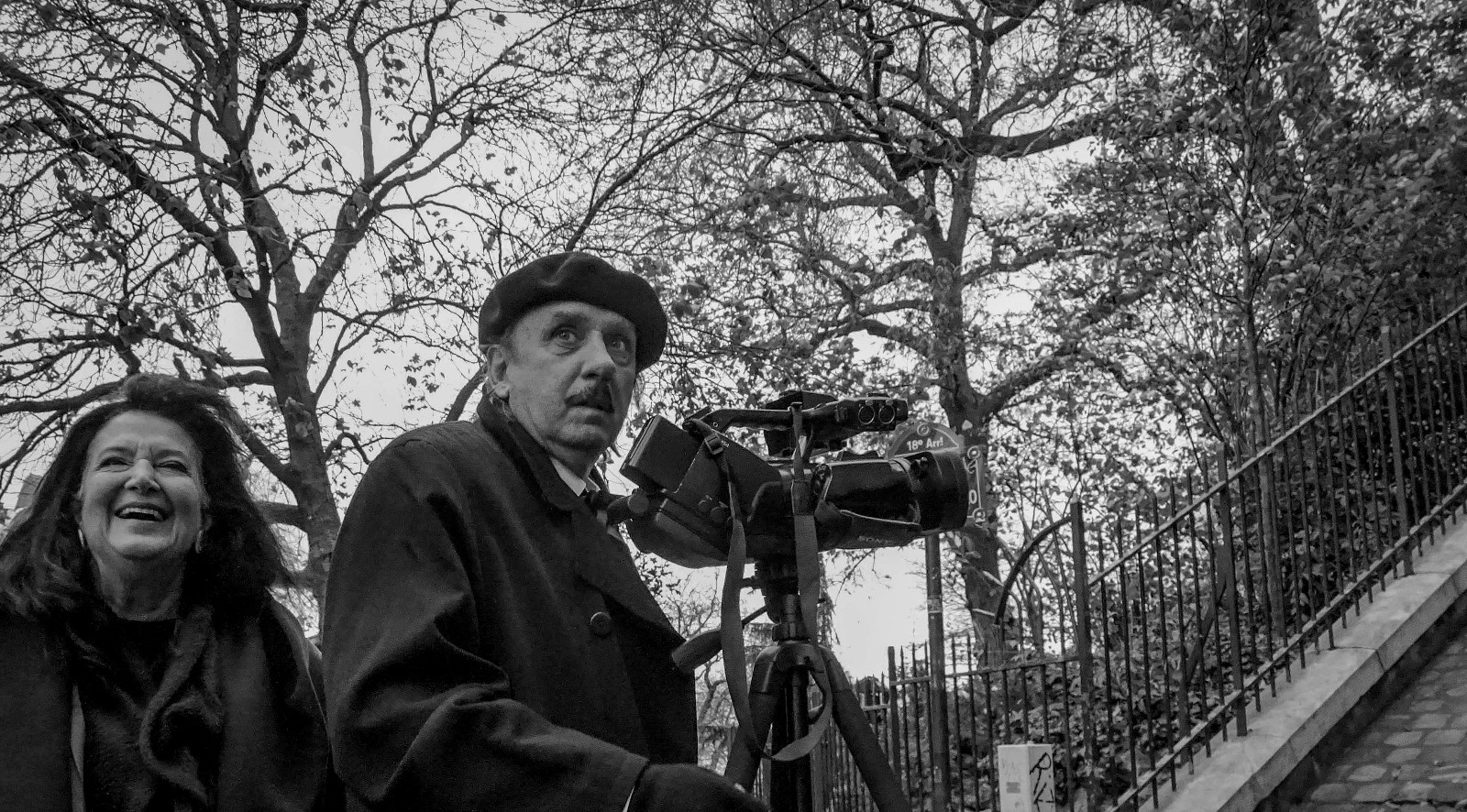 FRANCE Film Maker
Oh how I wish to have been able to converse with this man and his wife. I had especially gone to the Famous Parisian steps made more and more famous by each top photographer and this gentleman was there making a documentary of the steps. I grabbed this pic up close then because of his presence, and for me, unusually I asked to take his photograph. He agreed walking to the bottom of the steps and standing to attention. Not what I wanted, Surprisingly he motioned for me to stand in the same spot, took my camera and photographed me in a similar pose. I wonder how famous he is and what he was thinking at the time. 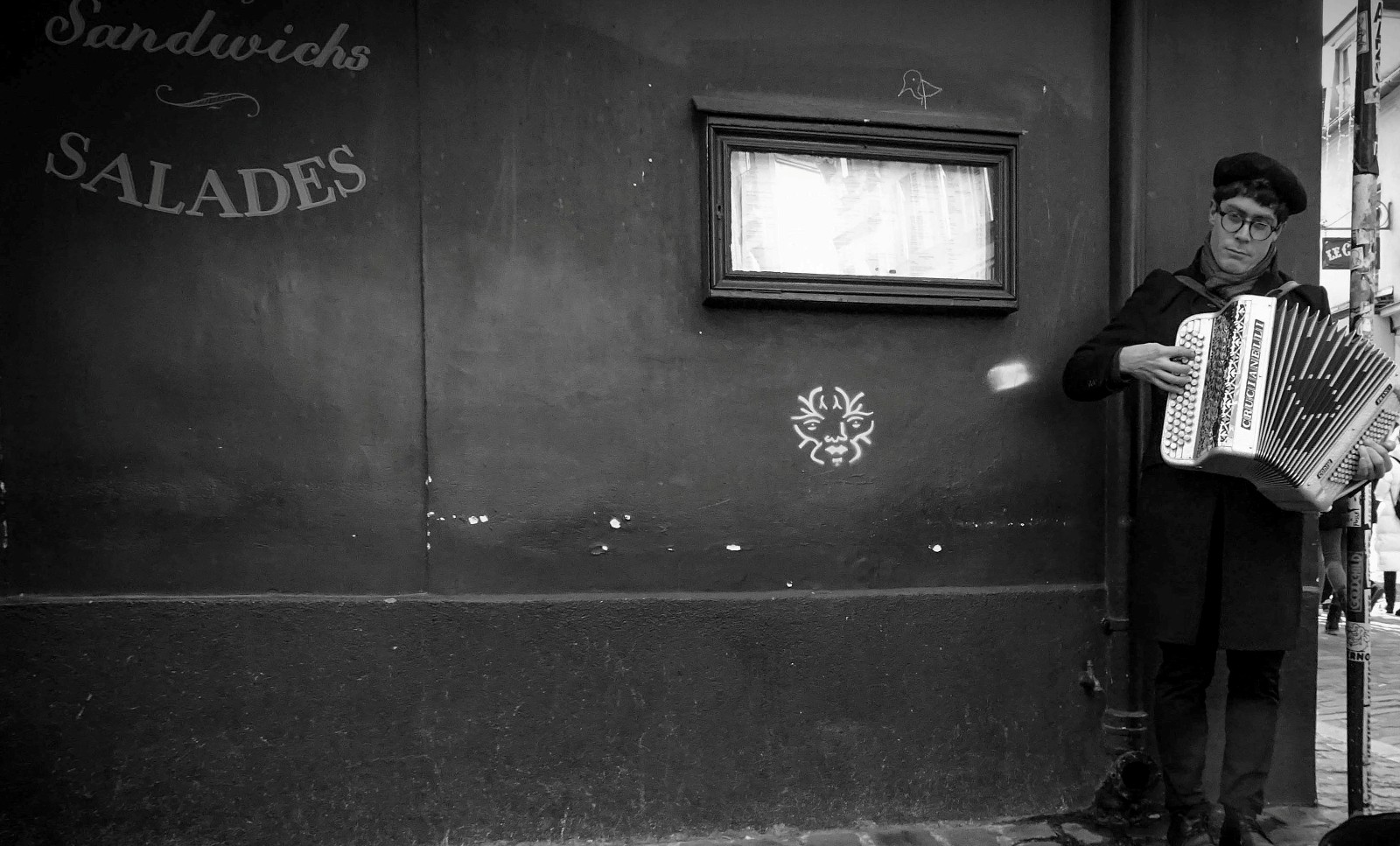 FRANCE Busker
As this was an extremely busy tourist area which required waiting for a clear pic. The piano organ player looked as bored as I had become. But we persisted. 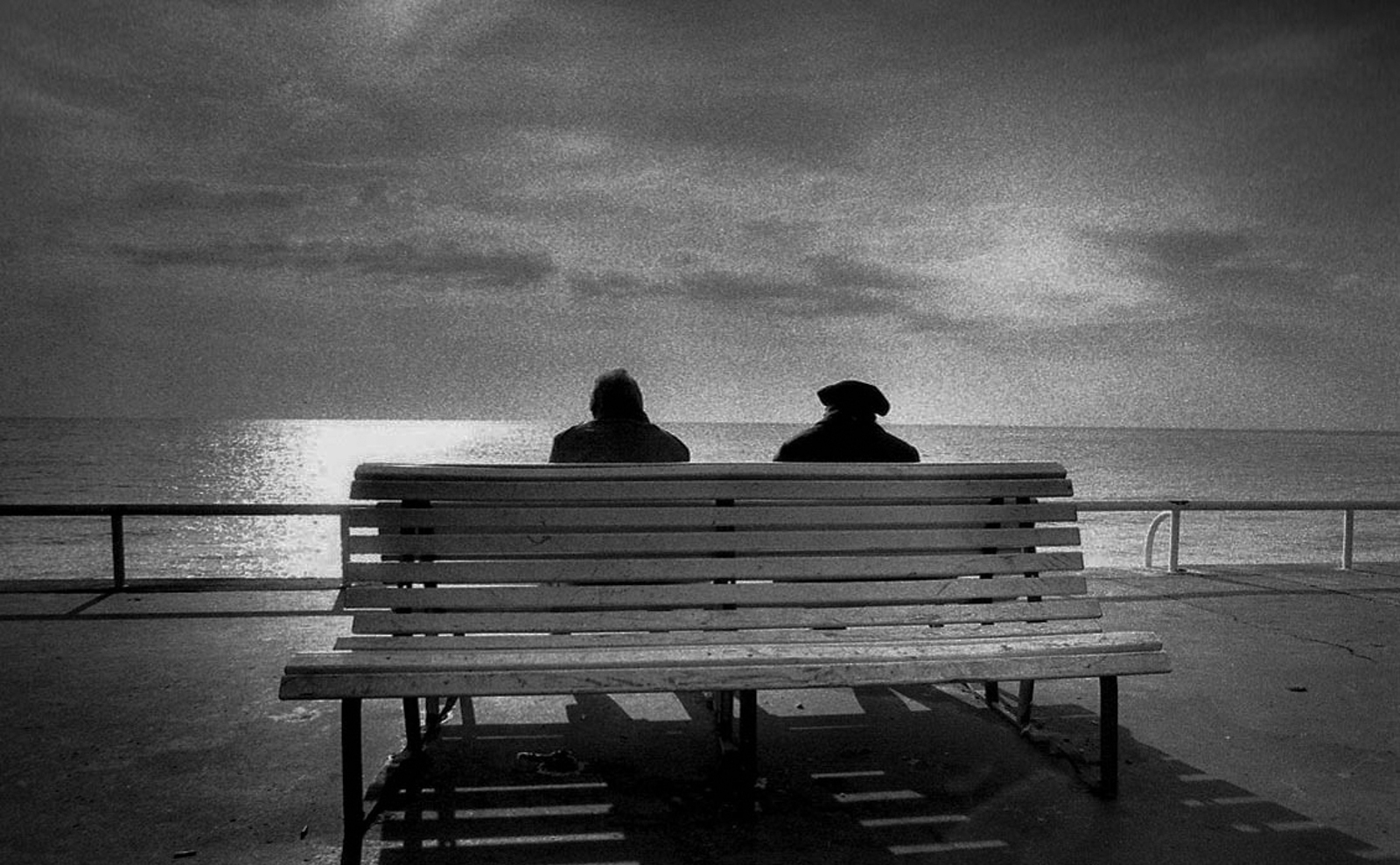 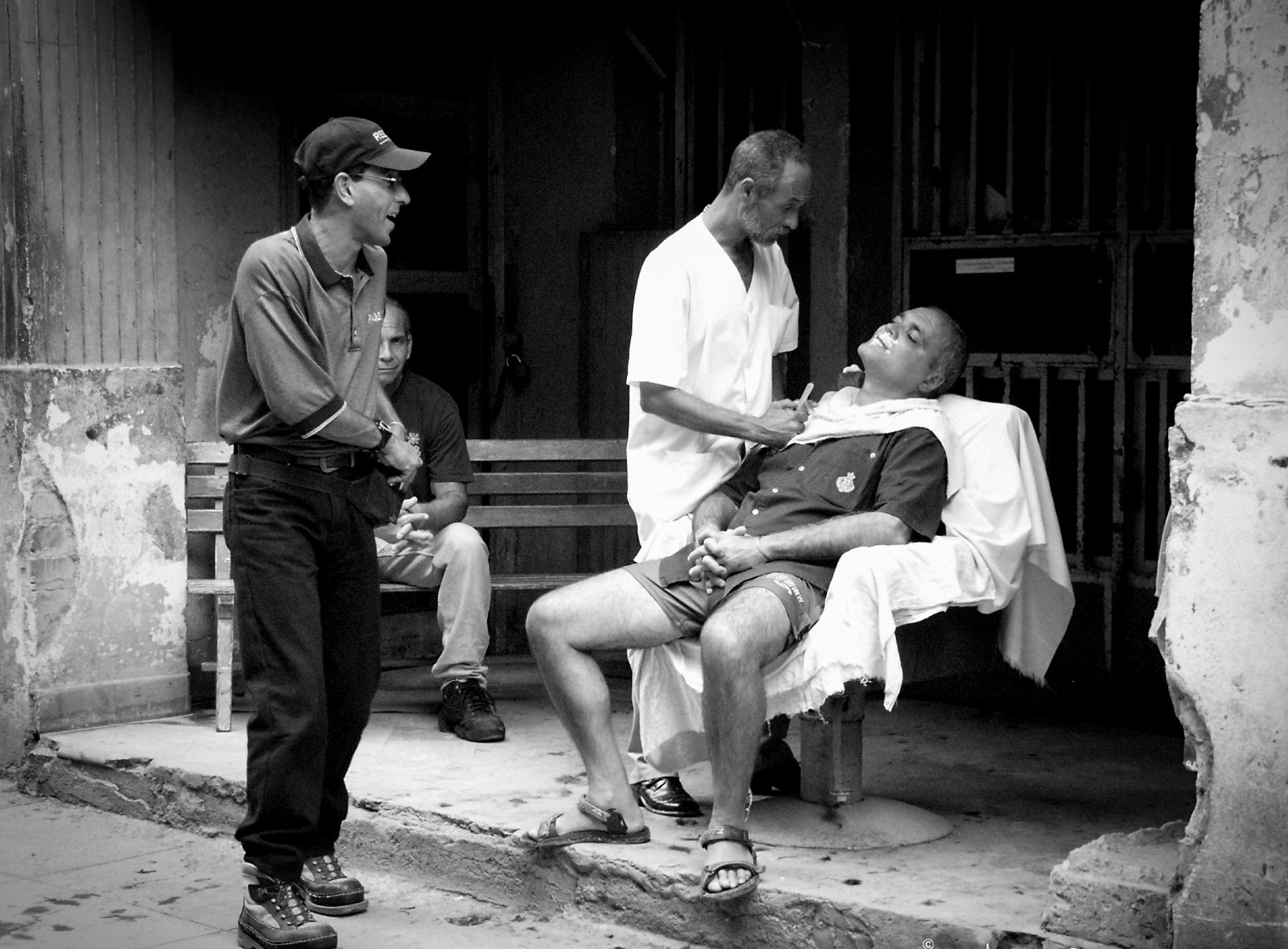 CUBA Street Outdoor Barber
How could I pass this scene? All seemed amused at something and there was the barber with a cut throat razor in his hand. Funny? 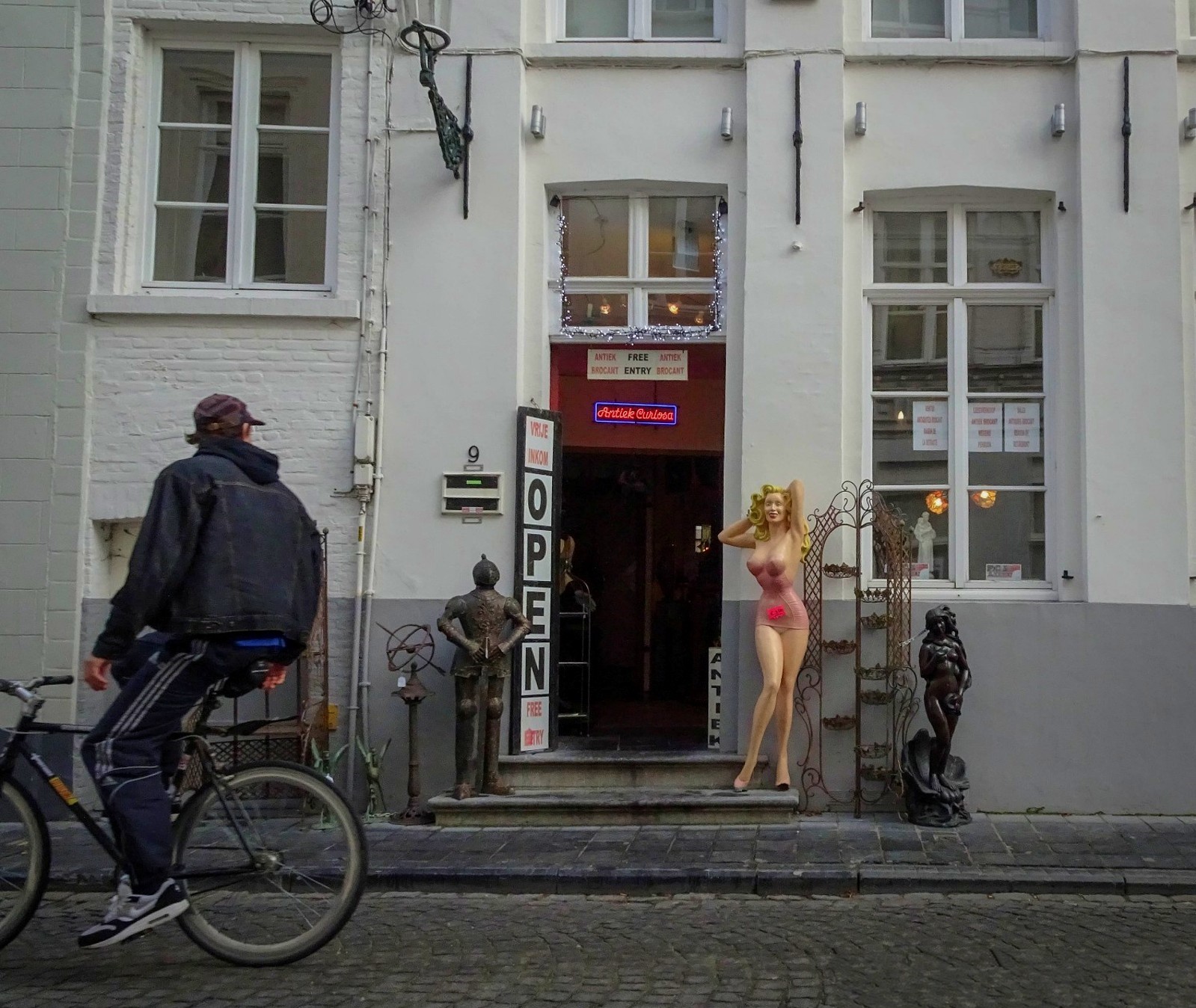 BRUGES Bike Rider Spots Statue
I was wandering the streets of Bruges and came across this store with a small statue outside. Just as I took the single frame this guy photo-bombed me on his bicycle. Although I fractionally missed the complete bicycle I was happy to see he was riding without his hands on the handlebars.