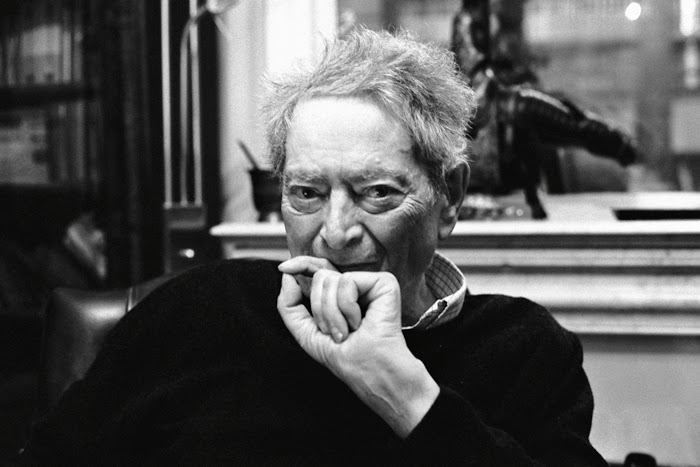 Tell us a little about yourself. Where did you grow up? You mentioned on your website you come from a “cerebral world”, what do you mean?

I’m 43, I’ve always lived in France, and I’ve been living in Paris for 10 years. I discovered photography quite late, it was spring 2012, just 4 years ago. Being a photographer was not my plan. When I started photography, I was teaching philosophy, that’s why I said that I come from a very cerebral world, very conceptual. And that’s why, fortunately, I’m not a conceptual photographer! Indeed, I had already plenty of conceptual matters to deal with being a teacher of philosophy. So when I discovered photography, it was a way of being free towards philosophy and conceptual thoughts. When I had finished my class, I would go back home with my camera around my neck, and I would start shooting what was going on in the street, without thinking, as if I was “washing” myself after work. It was an instinctive and spontaneous way of shooting that permitted me to forget philosophy. That’s what happened: little by little this practice that was at the beginning only a hobby, a way of relaxing after work, became a need. I needed to shoot every day, and even better I needed to shoot all day long. So I had to change my whole life. I took the risk to quit my teaching job to devote myself totally to photography. That was not easy, financially speaking, at the beginning. I had to accept a lot of jobs that I didn’t really like to make a living (such as shooting events or books for comedians or models), but little by little I began to organize exhibitions of my own work, mostly street photography, and today I’ve got the great chance being able to dedicate myself totally to the kind of photography I want to do. 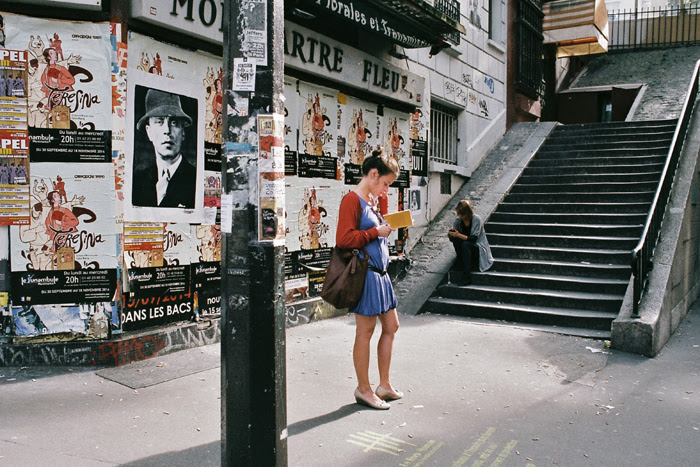 As I said, I began to shoot quite late in my life, I was already forty. I didn’t go to school to learn photography, I had no professional connections, no job in a newspaper as a photoreporter, etc. So I had no choice – the only thing I could do was simply get on the street with my camera and walk all day long, every day, capturing the pictures I felt. When I started, I didn’t even know that a genre called “street photography” existed, for me it was just pure photography – the kind of photography linked to chance, when you shoot wherever you are. And it’s this kind of freedom that makes street photography an important genre. Street photography doesn’t immerge from a pre-defined artistic project or a conceptual project, but it’s dependent on the vagaries of life in an urban surrounding. It’s the kind of photography that comes closer to what we can call pure photography. 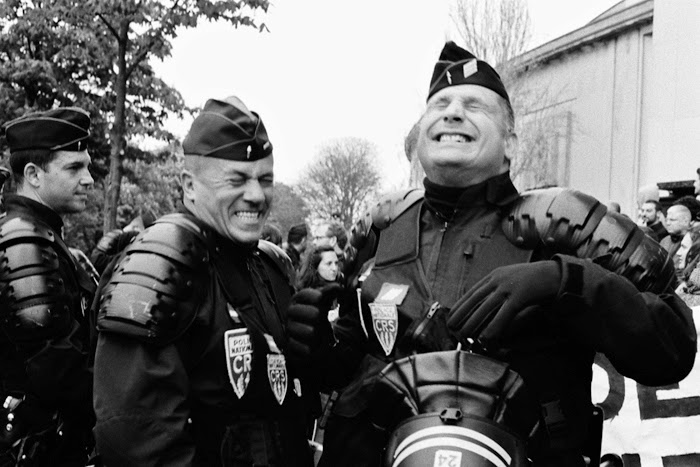 How would you describe your style of street photography?

Like many street photographers, I never go against this basic rule: shoot, and then think! However, I think that what makes me shoot without thinking is that I perceive in a situation what I call an “objective content.” Objective content is something that is not only interesting for me, but it is interesting for each person that is going to look at the picture. In that way, I don’t agree with the idea that everything that happens on the street is interesting. On the contrary, I believe that each picture must have a meaning. It doesn’t need an explanation, the spectator must be touched by the picture because he recognizes that something objectively interesting, is going on in the picture. Generally when I shoot, I know at this very moment when I’m shooting if the picture is good or bad. And when I look at my contact prints I notice that, generally, my intuition was good. It’s an instinct that I work on, but it musn’t exempt me from shooting a lot. We must confine ourselves to the golden rule: shoot first, think later (and when in doubt, click)! 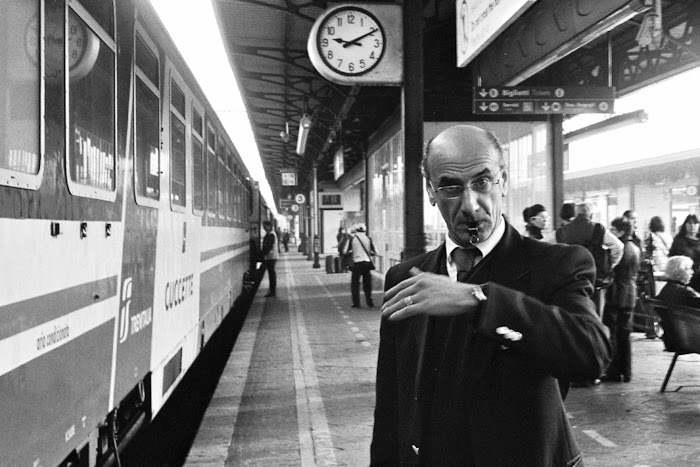 You have quite the ability for capturing dramatic scenes that evoke emotion. Part of the reason, I would venture to say, is that many of your portraits are taken up close. How do you choose your subjects? Do you interact with them?

I think that what fascinates me in those portraits is the intensity of their eye-contact. I choose the people I want to take a picture of depending on their eyes, the expression in their eyes. I would say that, according to me, a photography is a dialogue between eyes – I look at the subject and when it looks back at me, I shoot at that very moment when a communication appears between us, this moment is generally very intense in emotion! But this has a consequence that I find marvelous – when a spectator looks at the picture, he won’t be alone, the picture will look at him too. And that’s what makes a photography alive – you can look at it, but it can also look at you. And while looking back at you, the picture questions you and causes some kind of emotion. There is a very strong link between the photographer, the subject and the spectator – they look at each other mutually! And as the essence of photography is the art of the eye, we are here in the heart of what fascinates us in a picture. In fact, this idea is so important for me that I would never shoot a blind person or a dead person, for example. Because each picture must be like a contract between two persons. Even if the person I shoot doesn’t see me, I take the risk that this person surprises me (even though this sometimes generates conflicts). I know that a lot of great photographers didn’t respect this, even such a giant as Josef Koudelka. They took pictures of blind persons or dead persons, but I think they were wrong, and I think it brings a kind of discredit upon the rest of their work, because it’s shows the limits of their ethic. 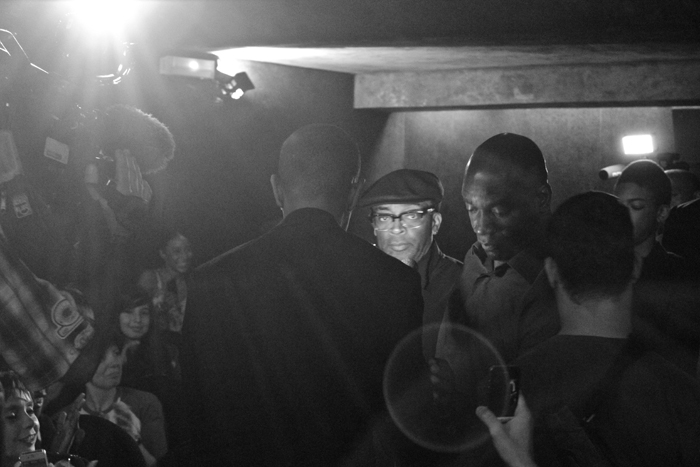 What inspires you to continue shooting street photographs? 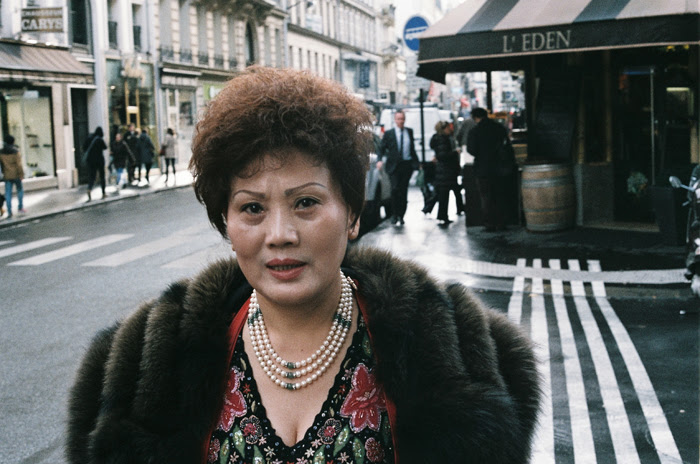 Do you have a favorite place to shoot?

Not in the sense of a particular street. I know that Garry Winogrand, for example, could stay all day long in the same spot, and shoot everything he could see. And the next day he would go back at the same place and do the same thing, on and on! I admire him because I truly think he is the greatest street photographer of all time – if we talk strictly in terms of street photography – but I don’t work like him, not at all, on the contrary, I need to walk a lot, to do a lot of miles every day. I need to see the surroundings changing around me. That’s what keeps my visual attention awake. I walk, I see streets changing, colors changing, and that excites my eye. I can’t shoot correctly if I stay still, so it is impossible for me to have a favorite spot. And when I arrive in a place I already know, I move on to go in a street where I have never been before. 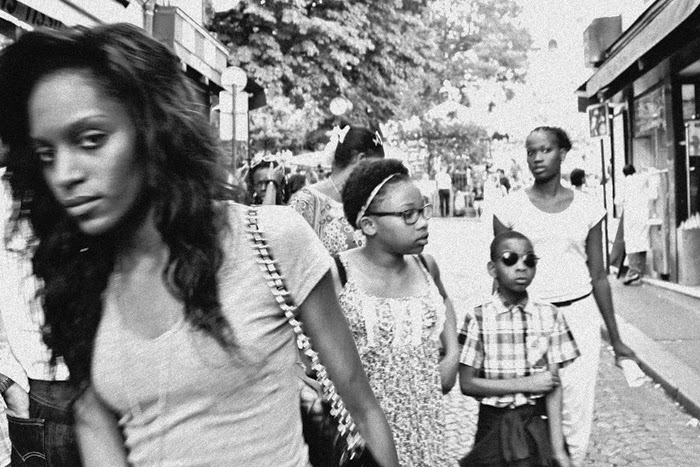 Who is your biggest influence in terms of your photography?

Without hesitation – Walker Evans. He’s the one who understood photography’s big secret – photography is a “double art.” Each picture should have a double value: a documentary value and an aesthetic value. Each picture should show the permanent tension between those two concepts. Winogrand may have been the greatest street photographer, but he favored the documentary side, above all at the end of his life, in those both sordid and magnificent pictures showing society’s deliquescence during the eighties. Another master of photography, Henri Cartier-Bresson, favored the opposite, the aesthetic concept, he was obsessed by composition, geometry and the golden ratio… In my opinion, they were both wrong, only Walker Evans was right: one musn’t favor one option over another, a good picture is the result of the absolute tension between the documentary value and the aesthetic value, those two values must be together in the picture in a perfect equality, fifty-fifty! I don’t know if Walker Evans ever said this, but that’s what I feel when I look at his pictures. In my opinion, this is art photography’s great secret.

What is the creative process you go through to create your work and what tools do you use (camera, post-processing applications, film, etc.)?

I work with the simplest of materials: the Canon FTb analogic SLR camera with two lenses, a 28mm and a 50mm, it depends on the situations. That kind of material cost about 100 dollars, it’s perfect, solid, I don’t need anything more! I don’t believe at all in the “Leica mythology,” according to which the camera for shooting street photography must absolutely be silent, discreet, etc. This is just marketing! In reality it’s impossible to be invisible when you shoot – it’s a myth! I shot with a Leica M6, and people saw me, it wasn’t so discreet (often people saw me even more and they came telling me, “Oh! You have such a nice Leica!” so this is the opposite of discretion…) However, whatever the material you use, people see you, even if they don’t hear the shutter. And it’s not necessary to have a silent shutter – quite often the noise of the shutter can create an interesting situation, or cause an intense eye-contact full of surprise or astonishment. Then I develop films every month, I look at my contact prints and do my selection. I don’t use any post-processing application, I very rarely reframe. It’s not dogmatic because if necessary I would reframe, and I can understand people that do it (Walker Evans did it all the time!). But I’m used to composing my frame when I take the picture, not afterwards. 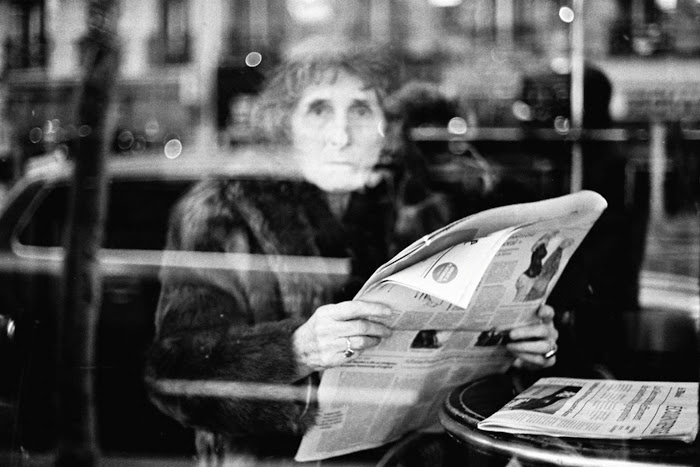 Finally, what advice would you give to anyone who is just starting out in street photography?

I think there is an absolute rule that Dorothy Lange wrote, “You put your camera around your neck in the morning along with putting on your shoes, and there it is, an appendage of the body that shares your life with you.” I want to emphasize something: people musn’t waste their time asking themselves what is the good material, the good camera, the good lenses, etc. I know a lot of people that loose thousands of hours to asking themselves those questions, searching the web trying to find which camera was using this or this great photographer – they are wasting their time, instead of shooting. So, above all, you must try not to be fetishistic about the material! Another piece of advice: never force yourself to go out taking pictures. When you don’t have the energy to watch, it’s better to stay at home. It’s generally in those moments when you take time to think about your work, that you make giant steps, even if in those periods you don’t take pictures…And then when you go back on the street, you are aware of the enormous progress you made just because you didn’t force yourself.

A Selection of Gilles’ Photos 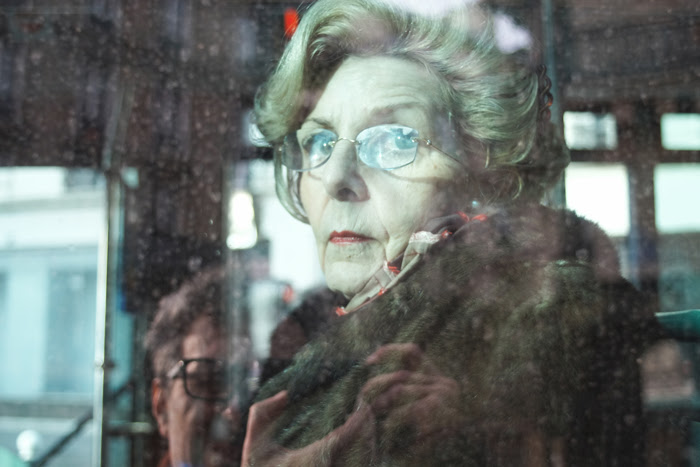 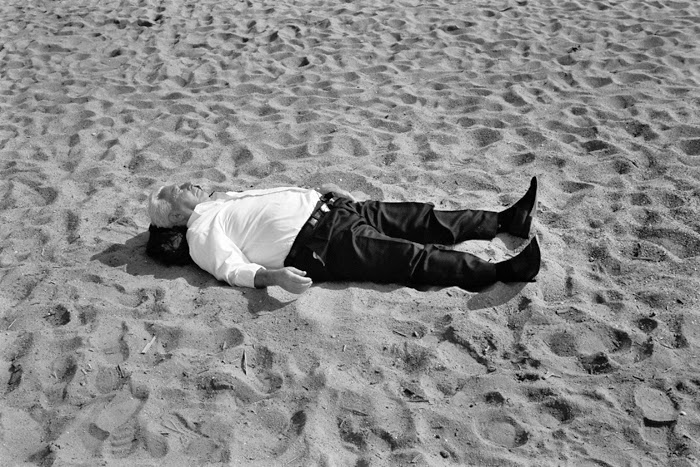 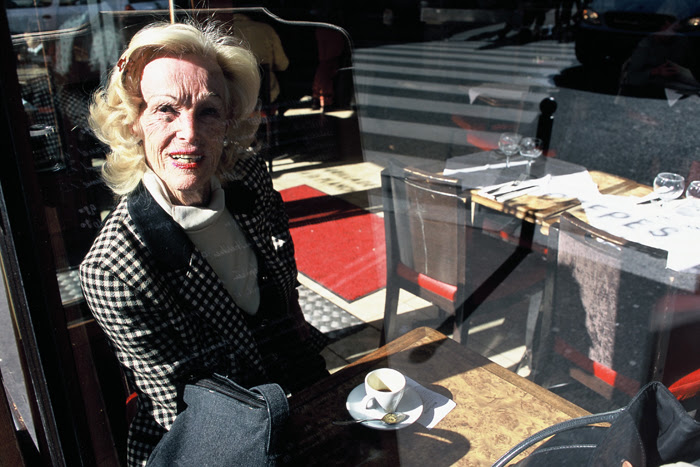 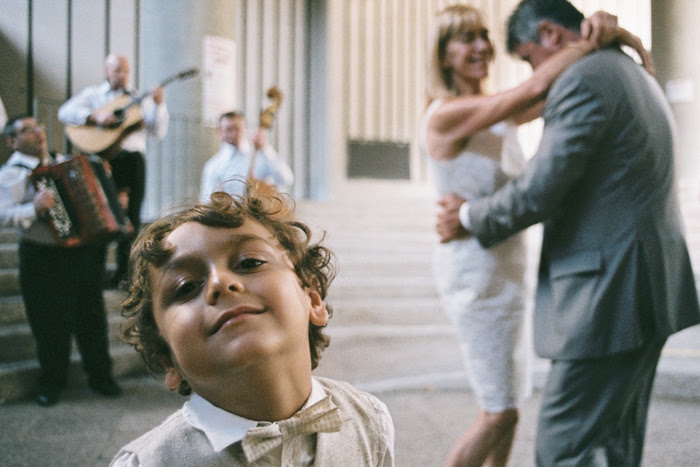 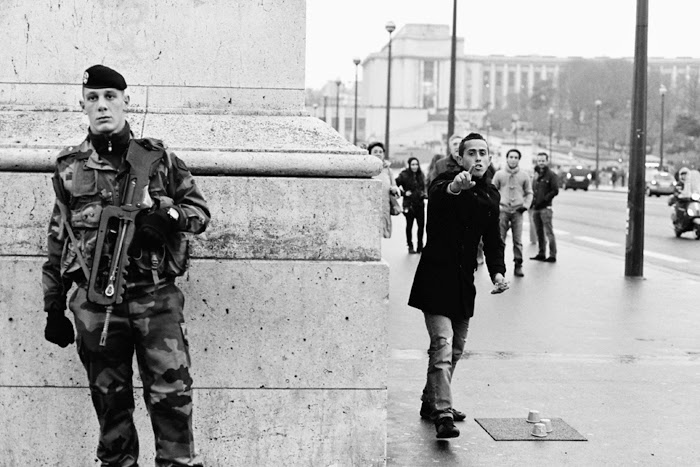 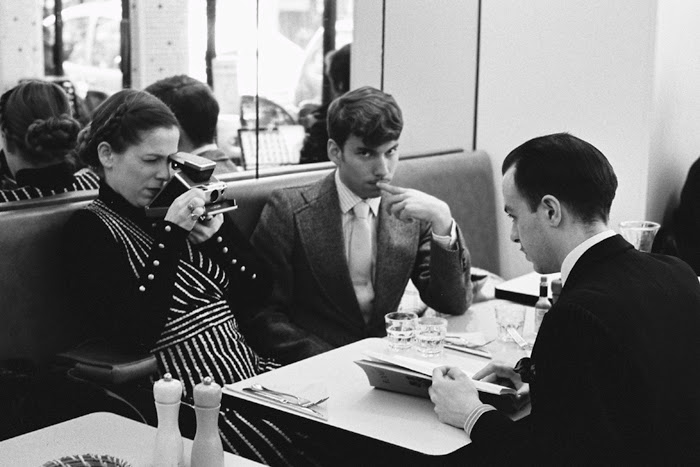 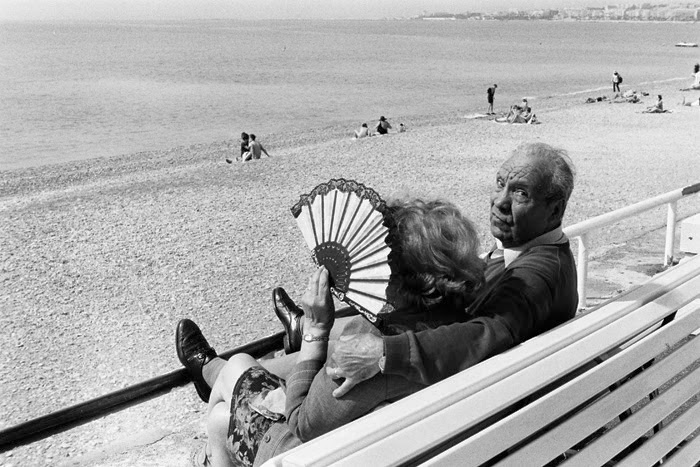 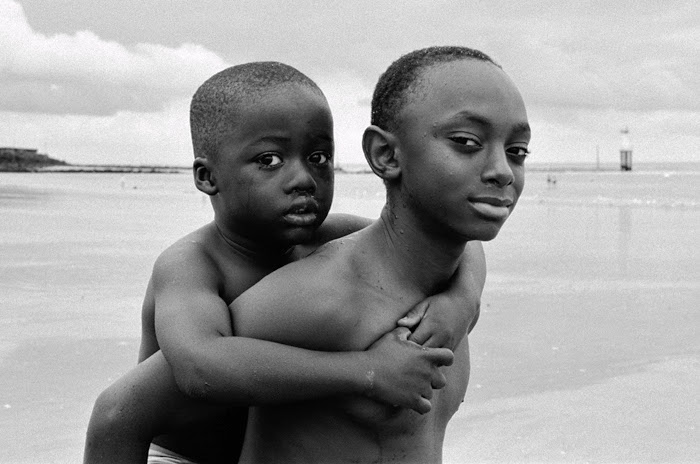 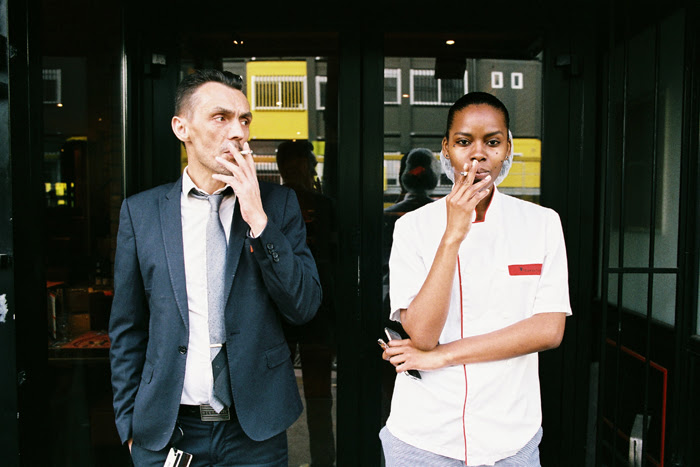