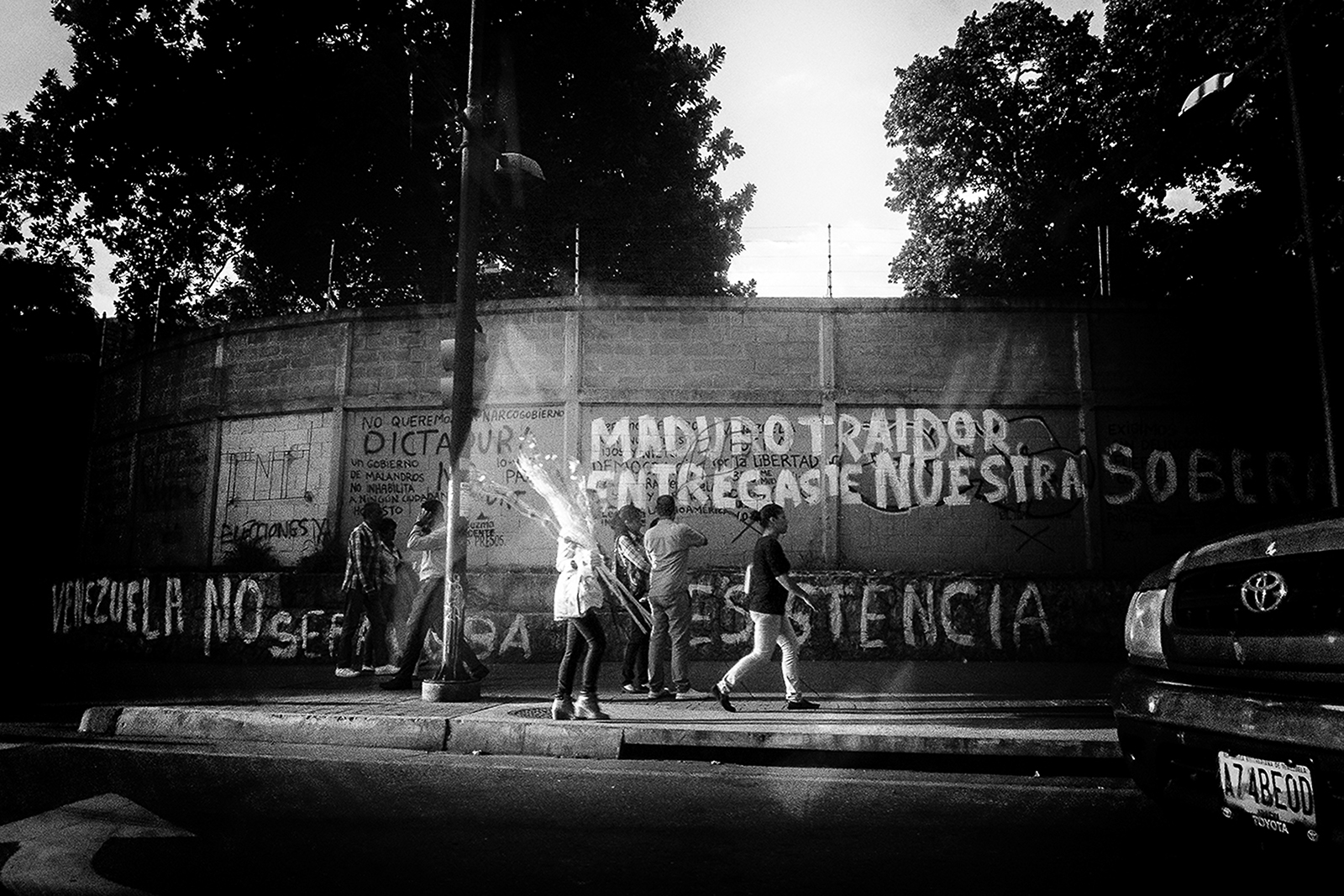 Nicolás Maduro Moros has cultivated a very questionable political trajectory, from a moral and ethical perspective. There are few doubts about this today. Only the group closest to Maduro, for interests related to the exercise of governmental power or negotiations of economic order, or for fear of reprisals and loss of security and privileges, and a few others for emotional attachment or blind fervor, would dare to believe otherwise. 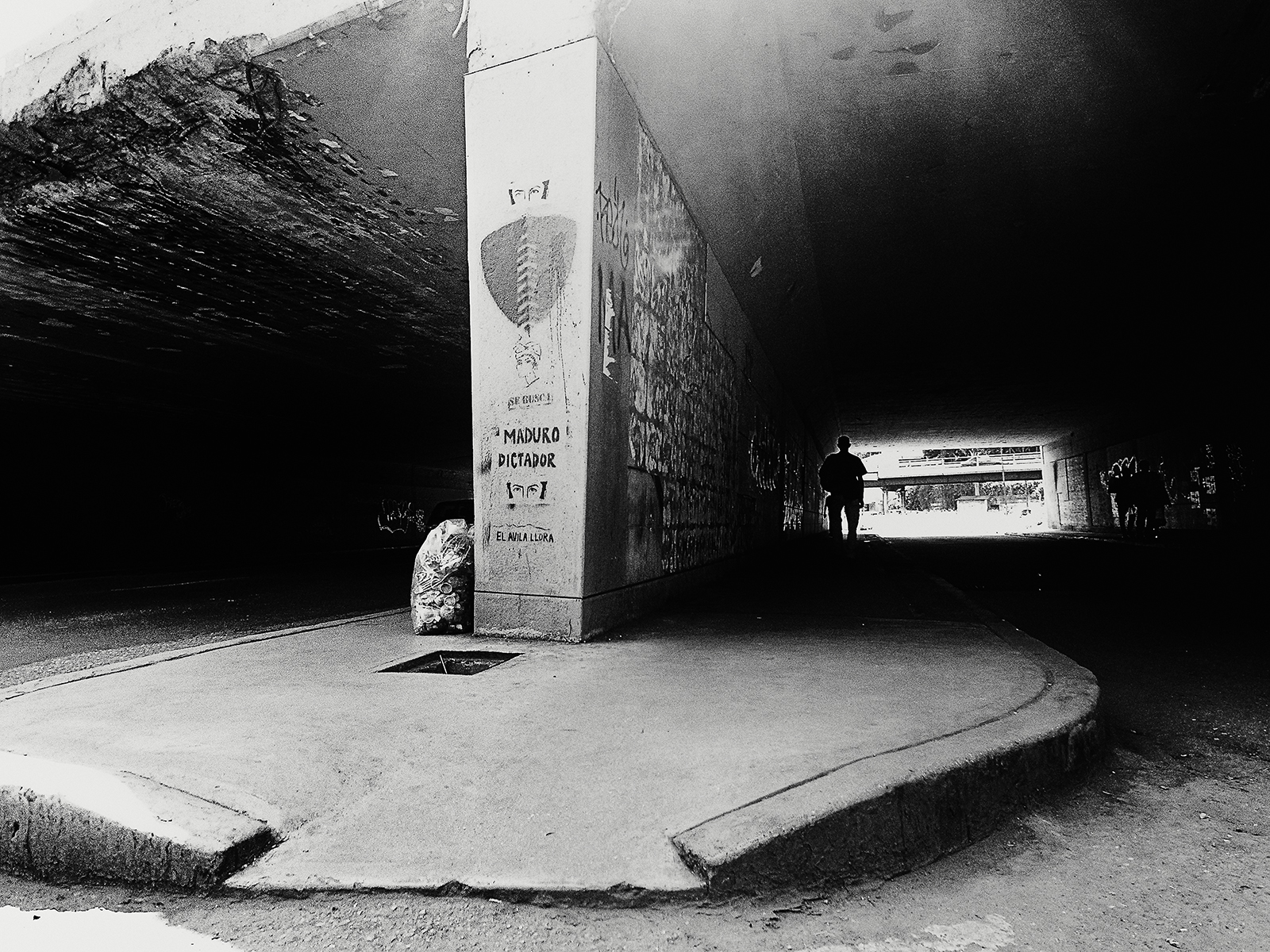 View of the tunnel below the Autopista del Este, between the Las Mercedes and El Rosal neighborhoods. This zone has been the scene of strong confrontations between the repressive forces of the State and the opponents of Nicolás Maduro. 19/11/2017

Since he assumed the presidency of Venezuela in his first term (2013-2019), the level of popular approval of Maduro has fallen considerably. Barely a year after he was sworn in, his approval ratings were at only 24.5%, according to a study by the Venezuelan pollster Datanalisis, presented in October 2014. And in the most recent survey, submitted by the international firm Consulta Mitofsky in January 2019, the level of approval was at 15%. 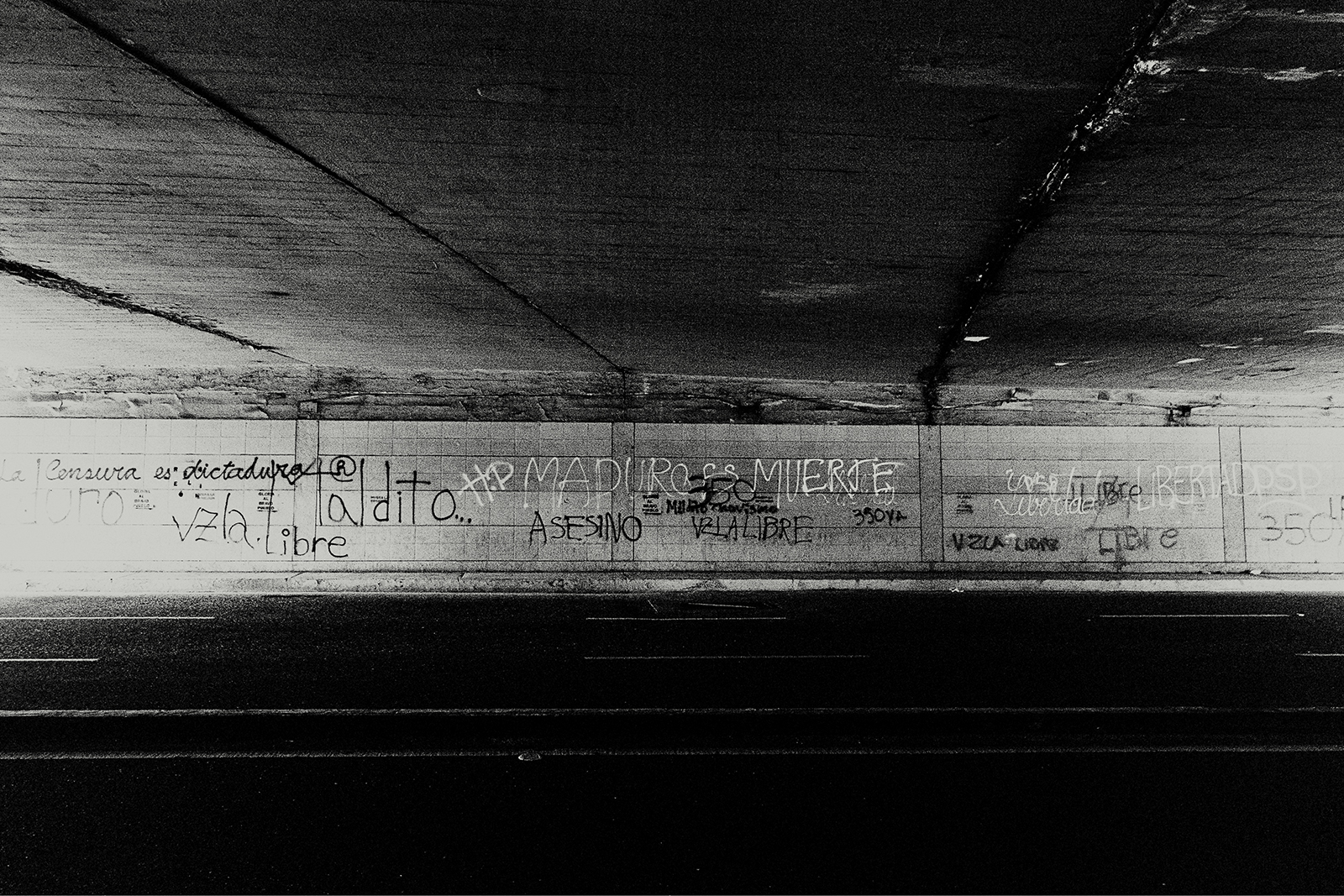 View of the tunnel below the Autopista del Este, between the Las Mercedes and El Rosal neighborhoods. This zone has been the scene of strong confrontations between the repressive forces of the State and the opponents of Nicolás Maduro. On the wall read several slogans against Nicolás Maduro, among them: “Maduro is death.” 28/08/2017

It should not be forgotten that Nicolás Maduro beat the opposition Henrique Capriles Radonsky in the electoral contest of April 14, 2013 by a minimal difference of 1.49%, which revealed that despite having been indicated as successor by the leader of the Bolivarian revolution, Hugo Chávez, Maduro hadn’t won all the affection of the popular Chavista base. Even his attempts to capitalize on the fervor of Chávez’s supporters by urging them to vote using slogans like Por amor a Chávez (For the love of Chavez) don’t seem to have worked. This accelerated loss of approval was one of the factors that motivated the preparation of the entire electoral stage of May 2019, where Maduro was re-elected for a second presidential term of six years. 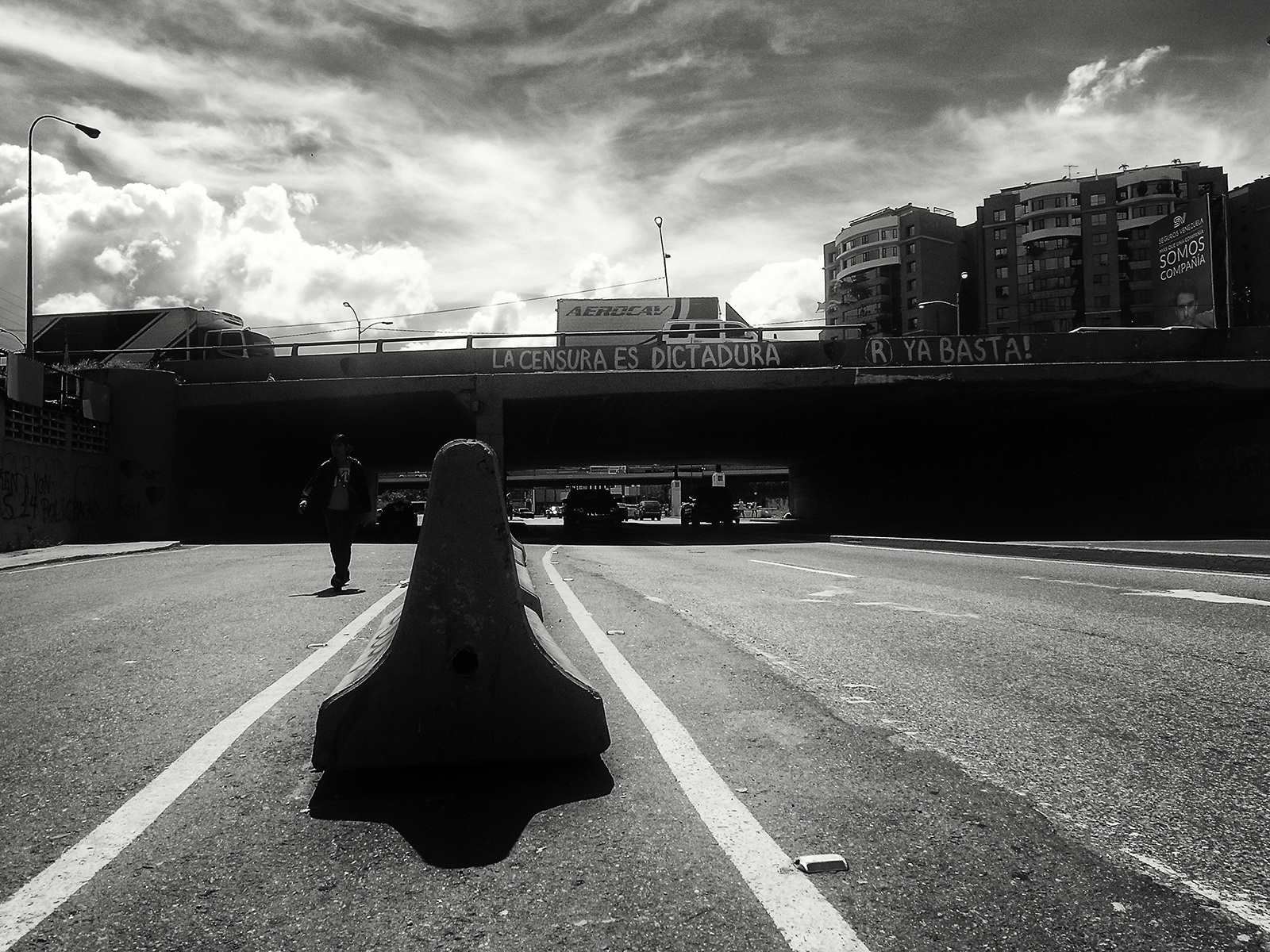 Elevated for the passage of vehicles on the east highway, above Avenida José Martí. It reads: “Censorship is dictatorship. Enough.” Caracas, 19/11/17

The questioning of and objection to the May elections was immediate, both nationally and internationally. Although there were countries that recognized Maduro as the legitimate president of Venezuela for a second term, such as Russia, China, Mexico, Cuba, Bolivia and Turkey, international organizations, such as the UN, OAS, the European Union, the Lima Group (with the exception of Mexico), the United States and Canada, among others, declared his second presidency illegitimate. 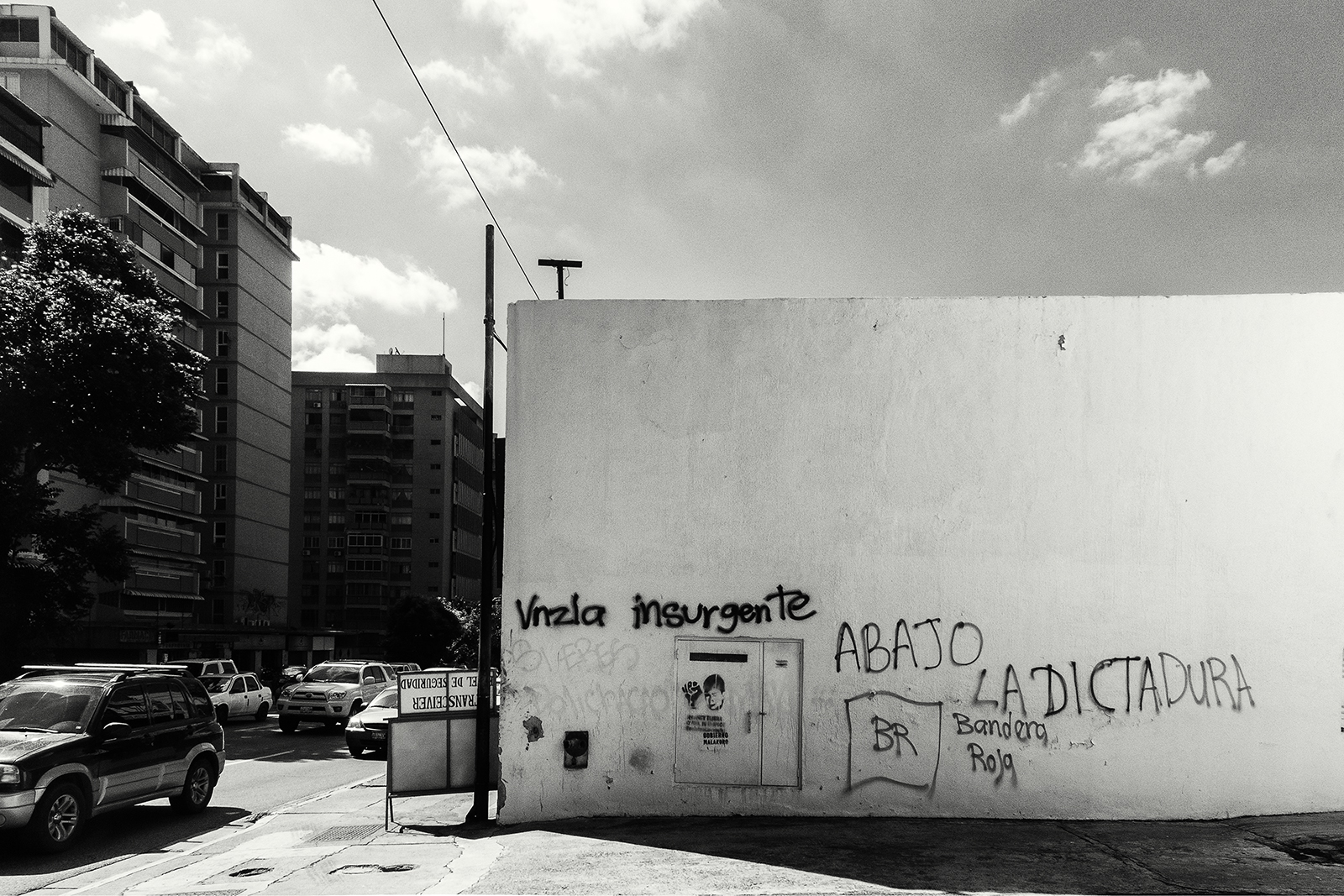 Wall on Del Ávila Avenue, in the Altamira neighborhood, in the east side of Caracas, with a phrase that says “Down with the dictatorship”. 01/11/2017

The truth is that Nicolás Maduro is unpopular. Despite the efforts of his propaganda machine, the Venezuelan crisis, exacerbated during his tenure as a result of the high level of government corruption, ineffective economic policy and repressive violence, has increased the rejection and the clamor for the resignation of Maduro, who today people qualify as a Dictator. In Caracas, the capital of Venezuela, the walls speak of this. 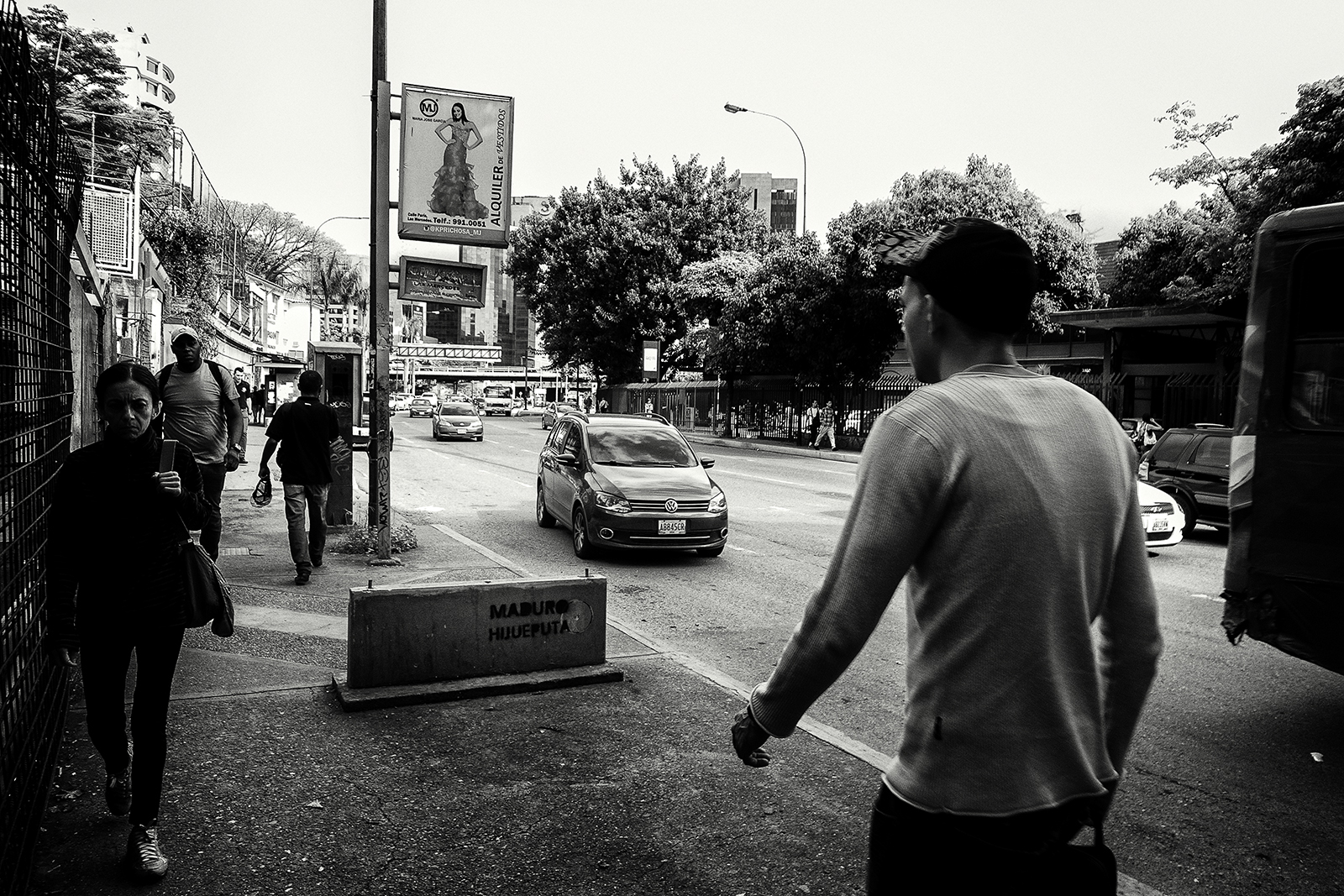 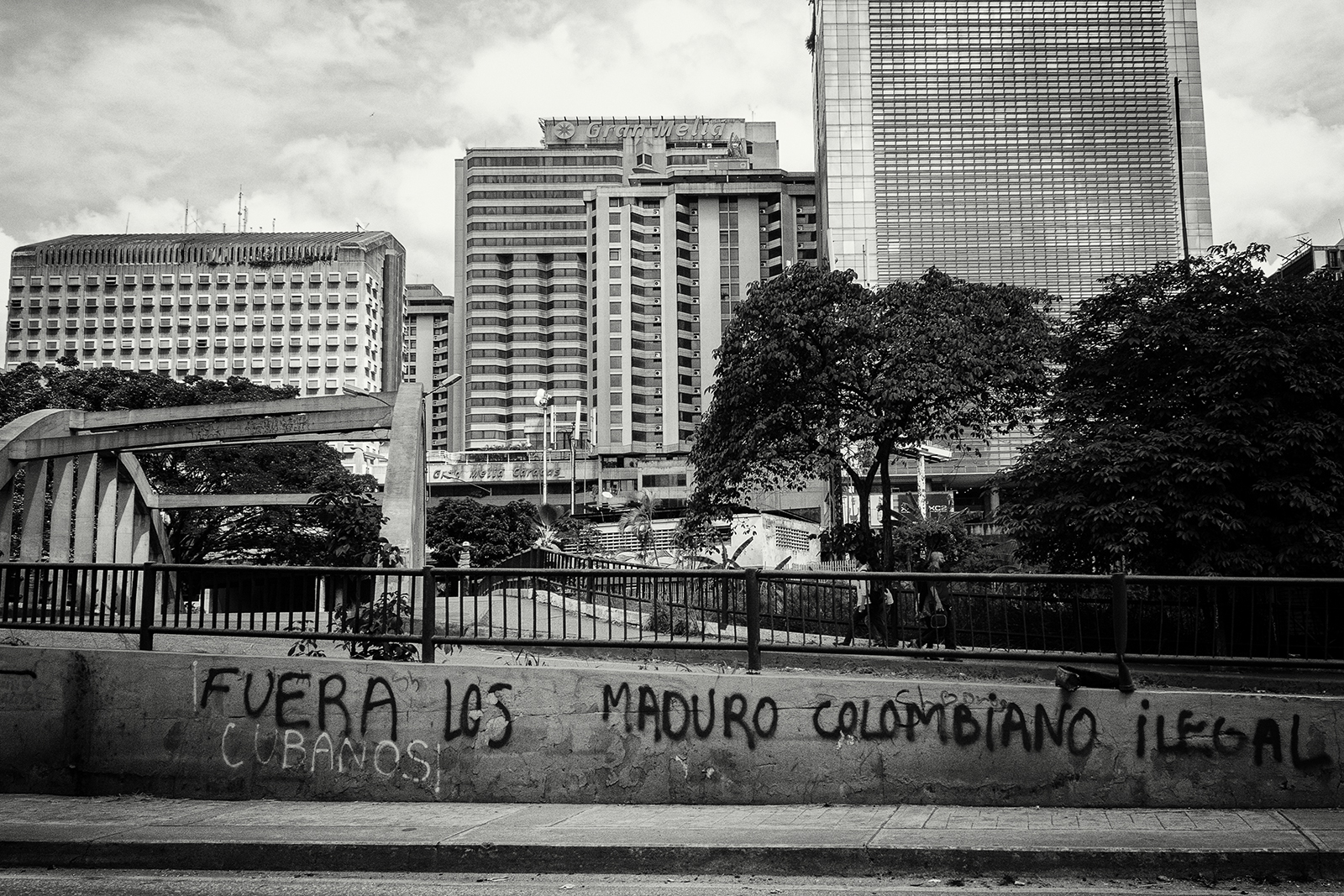 Wall on main avenue of Colinas de Bello Monte. It reads: “Get out Cubans. Maduro is an illegal Colombian.” 13/11/2017 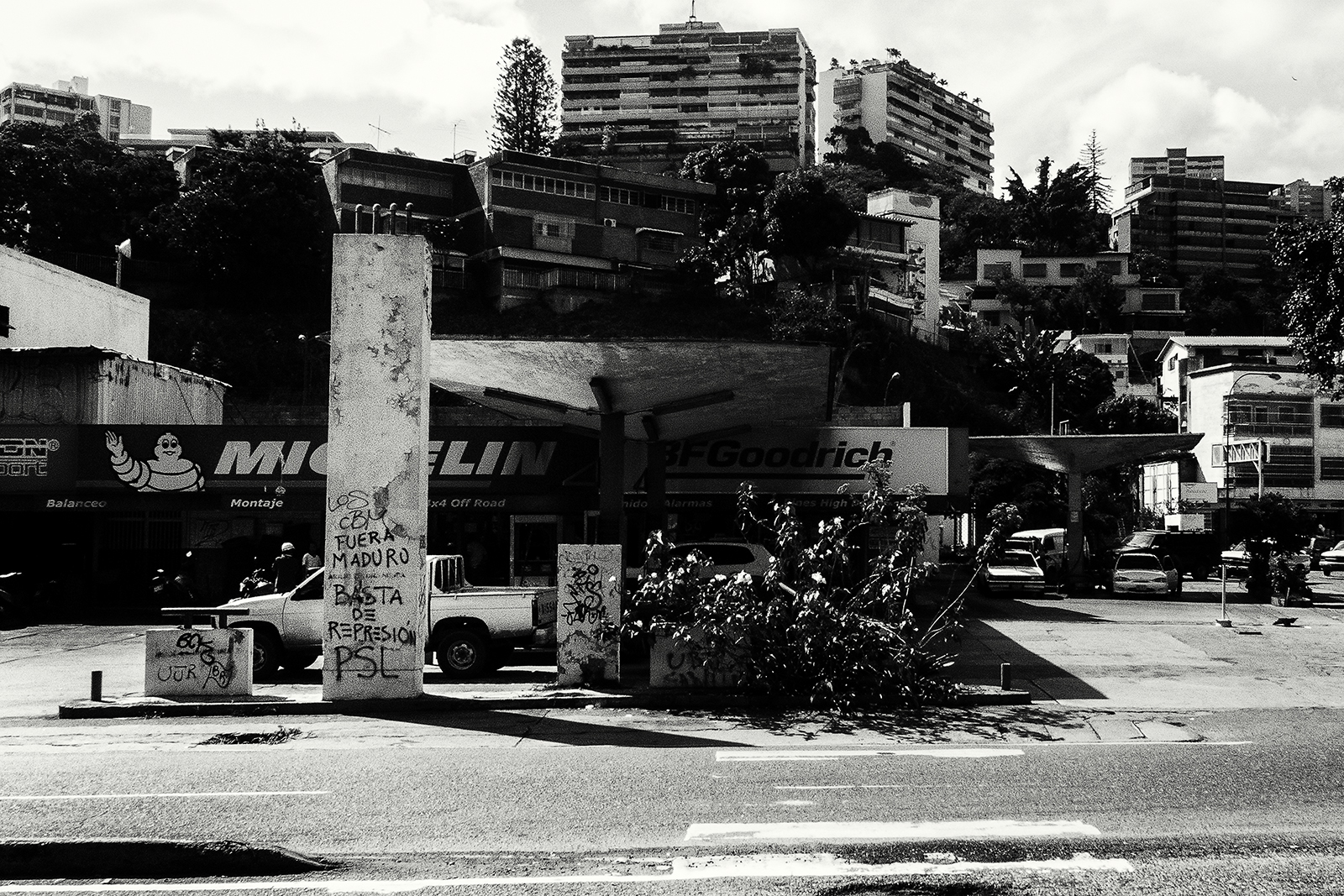 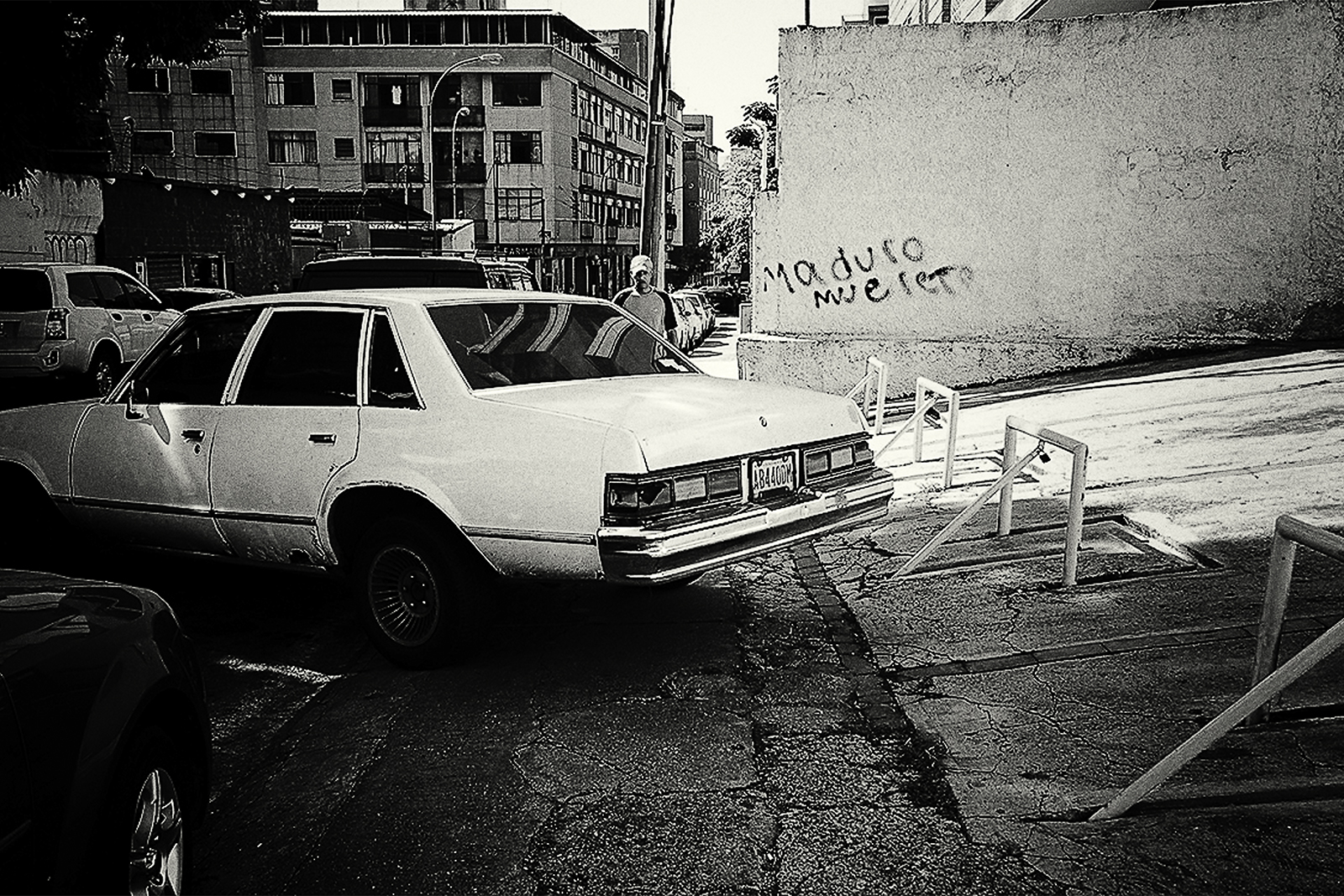 Wall on Guaicaipuro Avenue, in the Chacao neighborhood. The phrase “Die Maduro” can be read on the wall. 13/10/2017 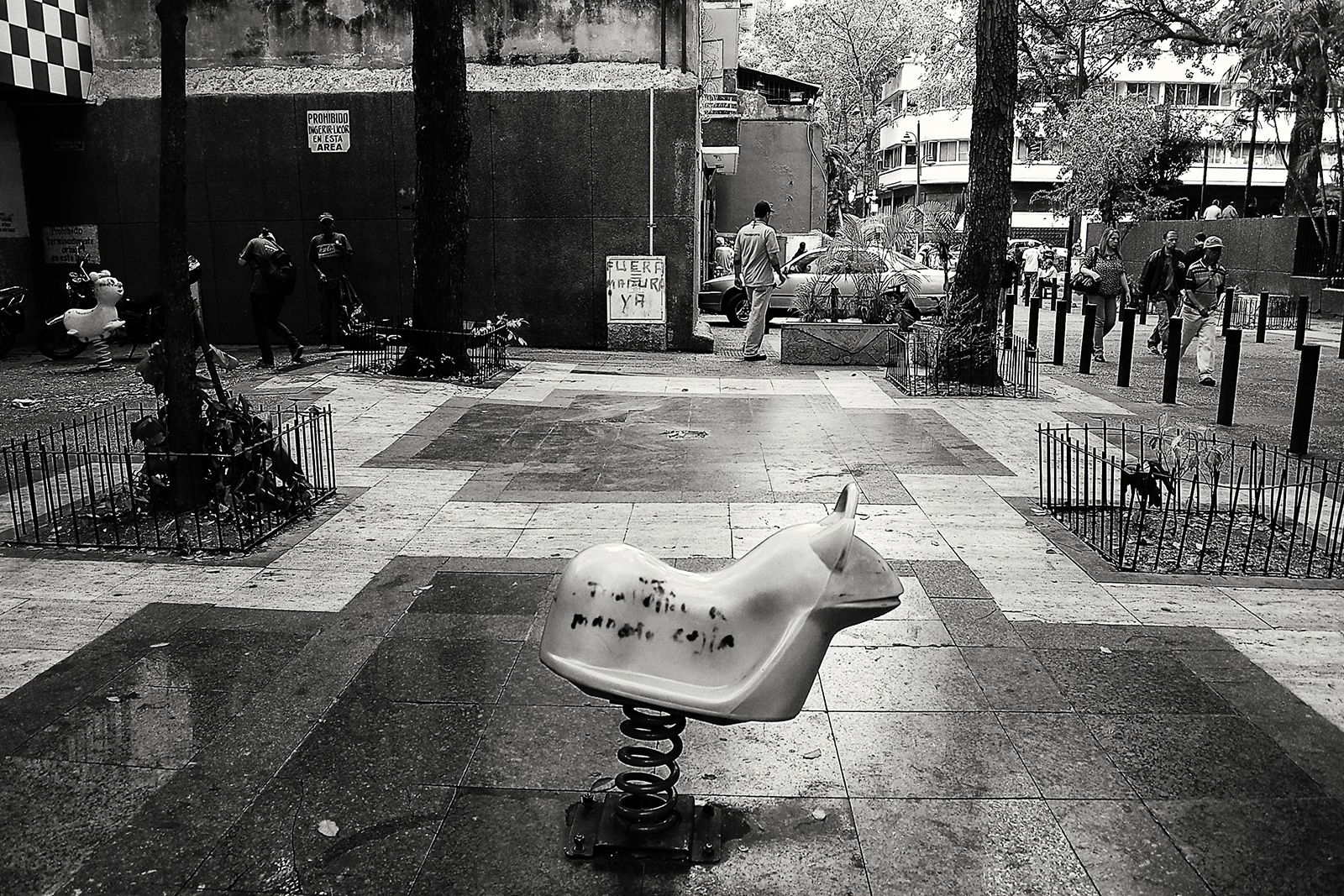 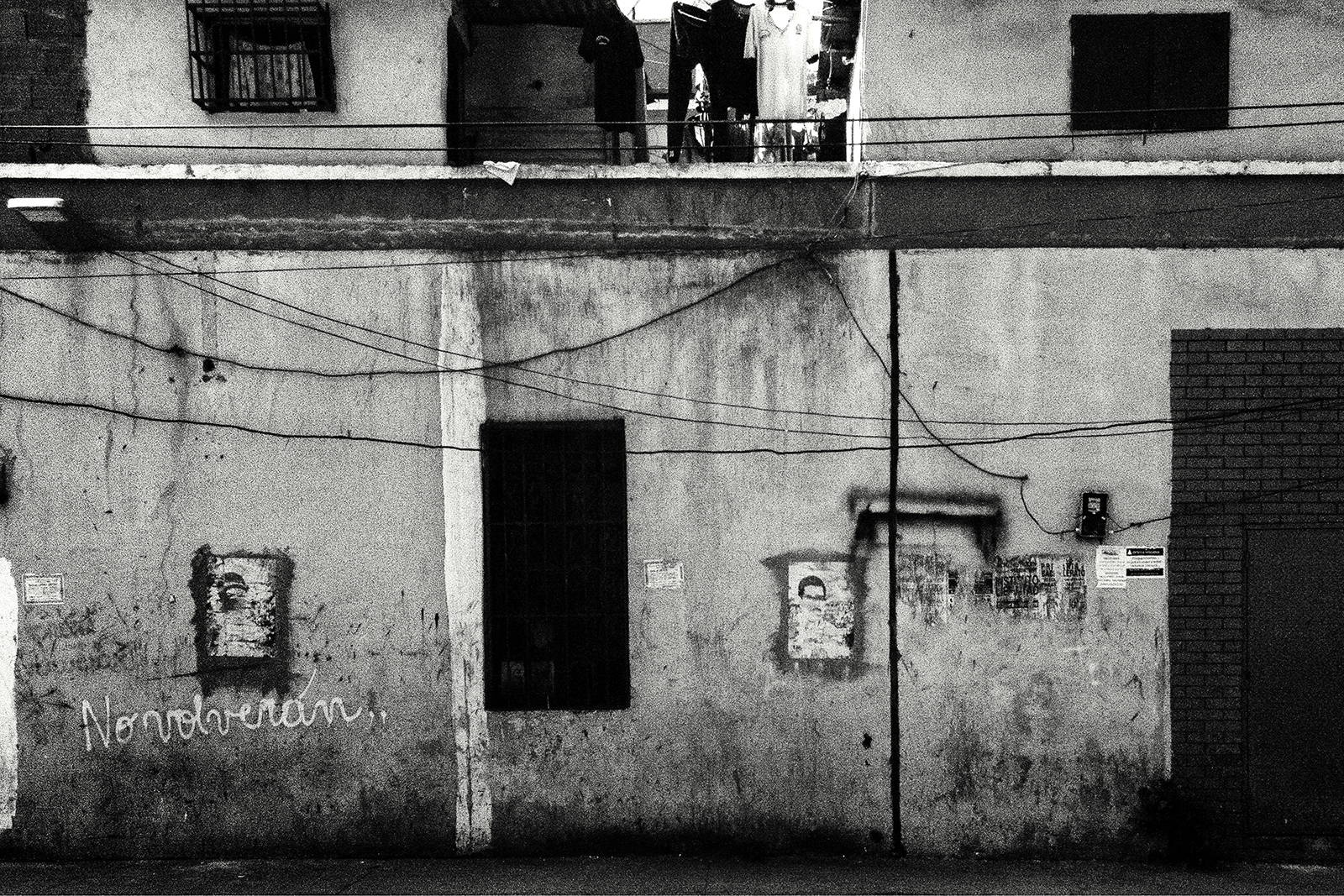 Wall on East 10 Avenue, in the San Agustin neighborhood, with the phrase “They will not return,” political slogan used by Chavez to encourage his followers. There is a poster of Hugo Chávez and another of Nicolás Maduro, quite deteriorated. 16/10/2017