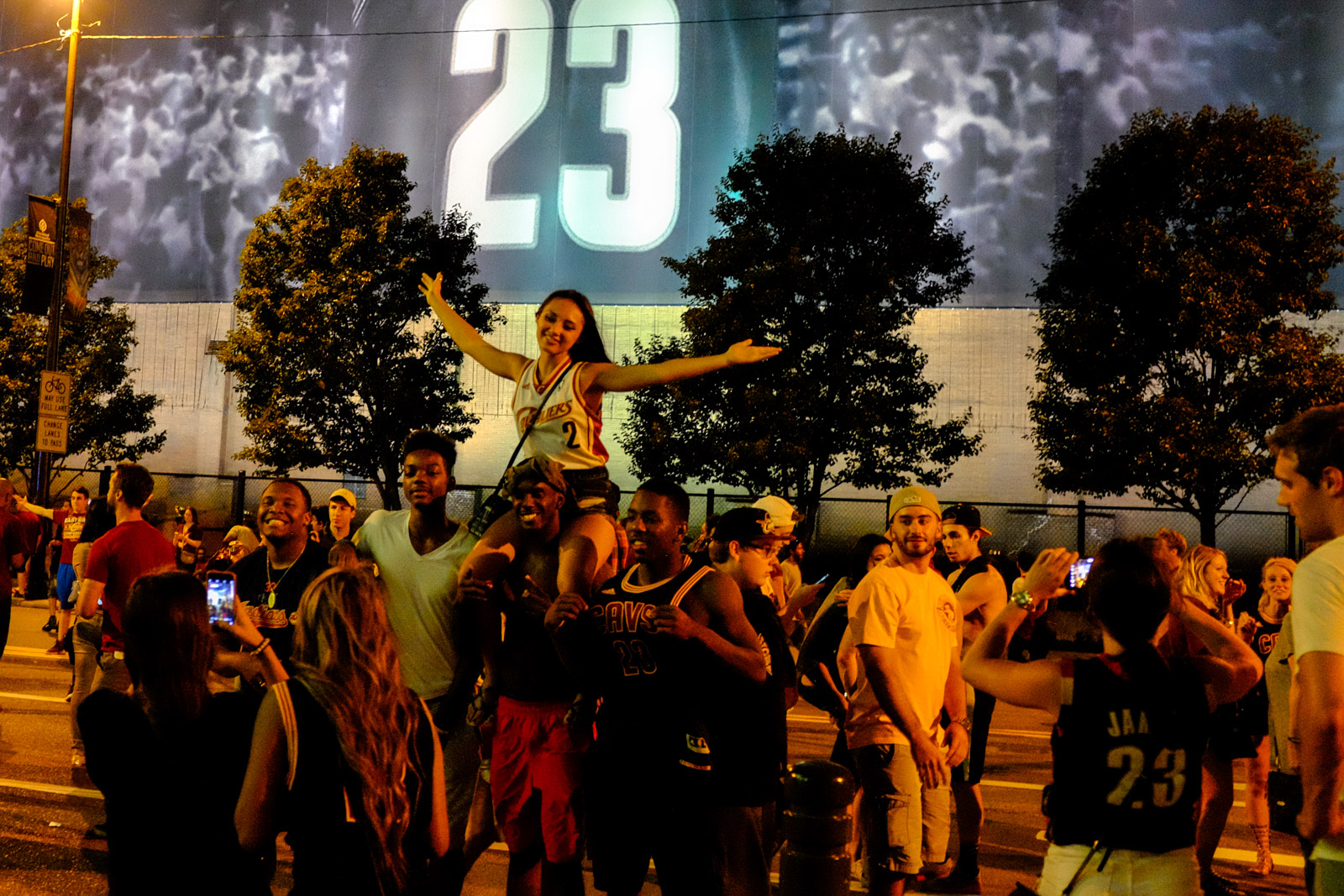 Bad Photo Alert – typically we strive to show only good photos in this magazine, but I’m including bad ones here to demonstrate a lesson that I learned. Since they’re my bad shots I’m only shaming myself.

On June 20, 2016, the Cleveland Cavaliers played the Golden State Warriors in game seven of the NBA championship. If you’re not familiar with the NBA, game 7 means both teams are tied and the winner is crowned the Champion for the season.

Bear with me because this really is about photography.

It was a very exciting time for our city because the last time a Cleveland sports team won any type of championship was the 1954 World Series. The entire city was hungry for a championship and this was our first real opportunity in a very long time. Although the big game was being played in Oakland, California, the city scheduled a watch party inside the Cav’s basketball arena and outside on a Jumbotron for all to see. It promised to be a major event.

It was also Father’s Day. My son surprised us by driving from Washington, DC to our home in the Cleveland suburbs to celebrate. After a nice dinner my son suggested that we go downtown to watch the game with the crowd.

I grabbed my camera (at the time it was a Fuji X100T ) and scheduled an Uber for the ride downtown.

Thirty minutes later we arrived near the arena just as the sun was setting. The atmosphere was electric. Tens of thousands of people of all ages, races and nationalities were crushed together with one thought in mind: The NBA title. I had never seen anything like it and haven’t since. The photographic opportunities were endless, but I was also distracted by the excitement of the game.

We exited the Uber near a parking garage that overlooked the plaza with the Jumbotron. The plaza was so packed that the only way to see the screen was to watch from the open bays in the garage. I was amazed by the mass of humanity crowded into the garage bays watching the game.

It stopped me in my tracks. I switched on my Fuji and began making photos of the scene. I was so blown away by the sight I couldn’t wait to review the photos the next day.

Little did I know that my exposure settings were all wrong for night shooting. I shot for well over an hour before I discovered my mistake. Most of those early shots were hopelessly underexposed, suffered from motion blur or both. I did have two recognizable shots of the parking garage, but they’re both terrible. 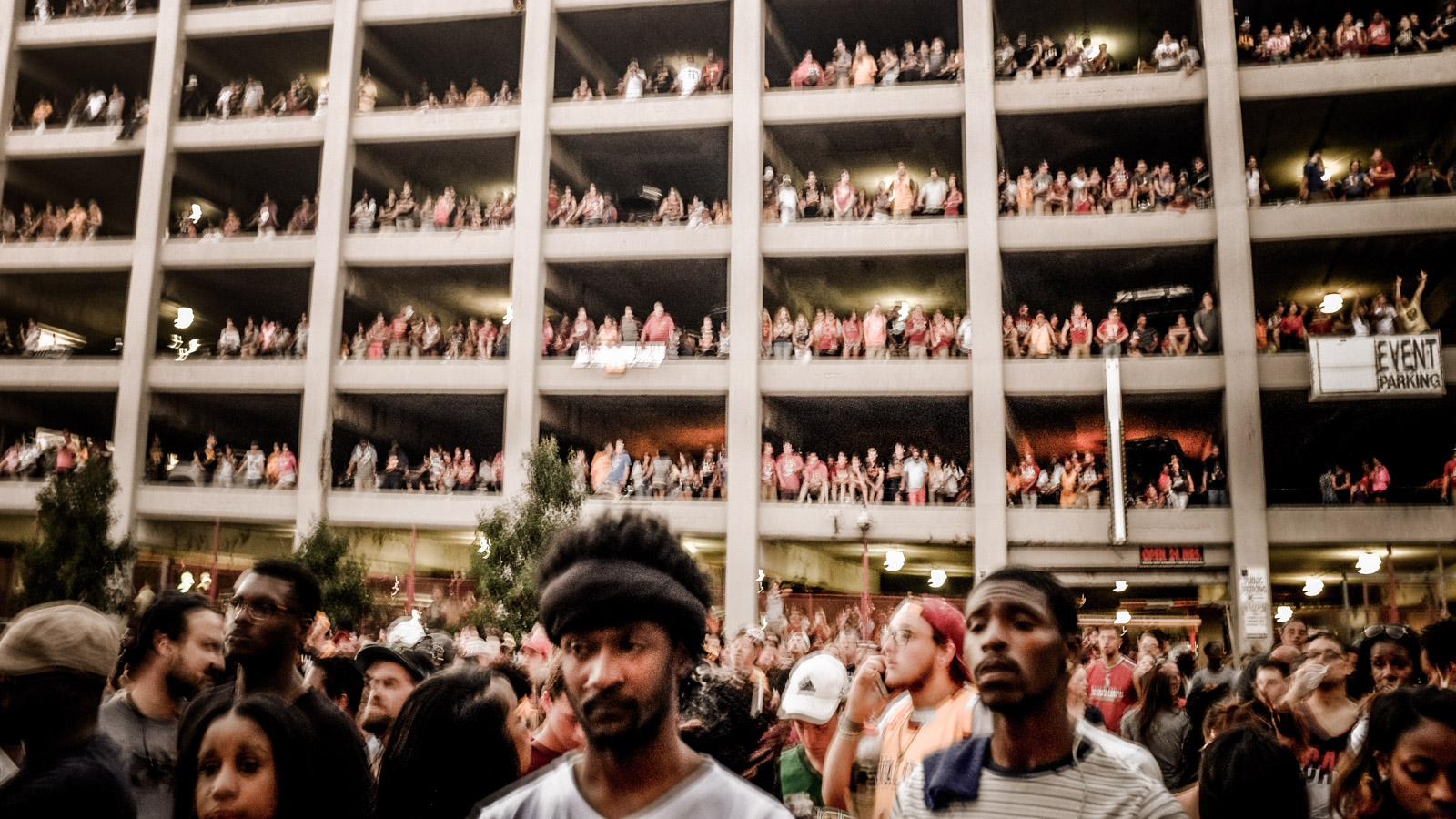 This is one of the only recognizable frames of the parking garage. If I weren’t using this as a bad example I wouldn’t publish it.

Some potentially good photos of an historical event were lost due to bad habits and becoming wrapped up in the excitement of the moment.

The good news is that the Cavaliers won and I discovered my error in time to capture the celebrations throughout the night. A few of which are keepers. And I vowed never to make the same mistake again.

That night I made several mistakes that needed to be avoided in the future.

My biggest blunder was that I got so wrapped up in the excitement that I didn’t even think about looking at my exposure settings. Two minutes would have saved dozens of lost shots.

Next, I didn’t bother to take a few test shots to before starting. Instead I just fired away. I would have been better off putting my camera in P (program) mode or using my phone.

Finally, I didn’t consider the fact that it was nighttime, meaning I did’t think about the current lighting conditions. 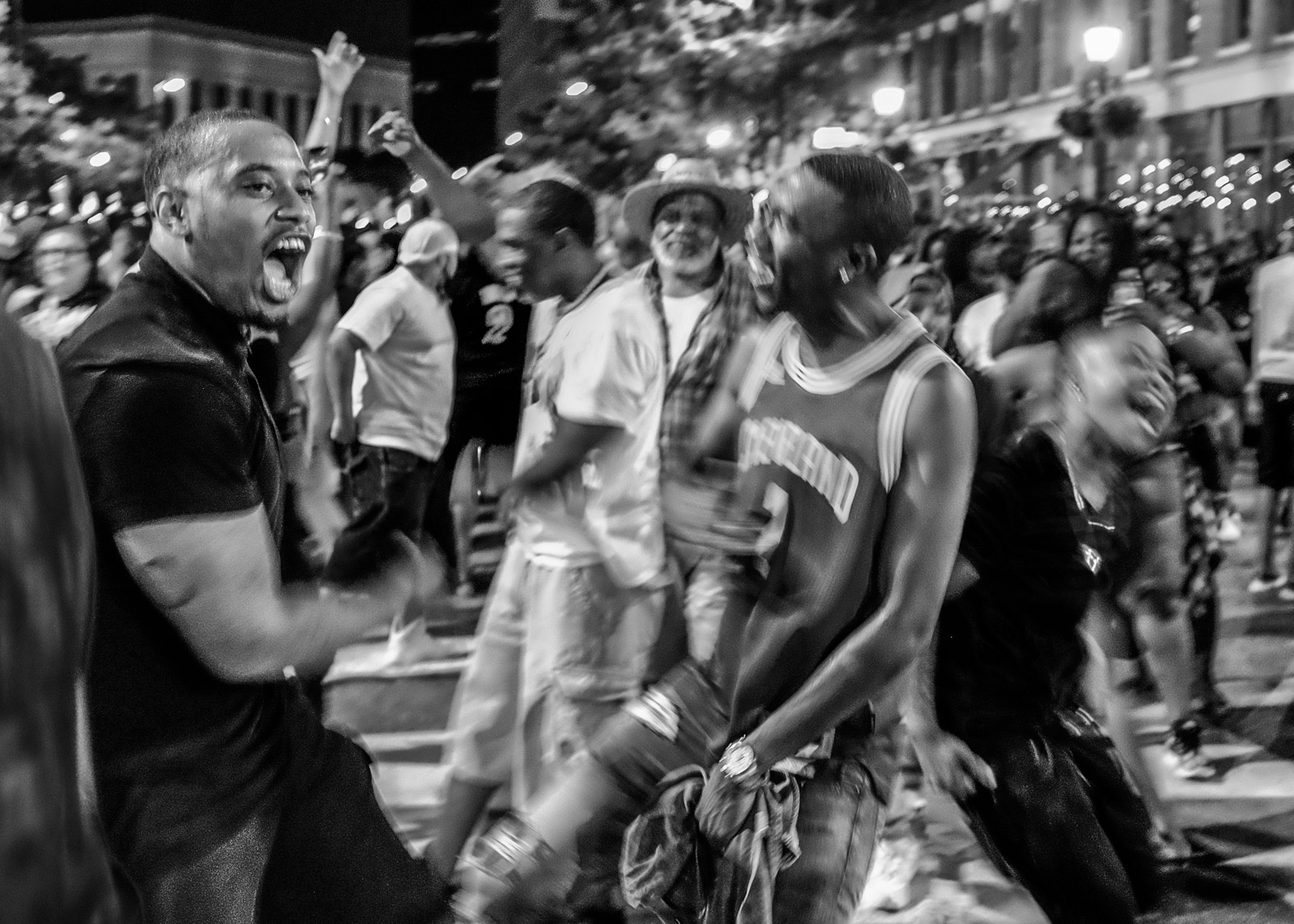 Sometimes my slow shutter speed paid off (a good miss as they say). I got lucky bu capturing the guy on the left as he stood still long enough to avoid the motion blur, while everyone else was in motion.

I had developed a number of bad habits that came together in a perfect storm to rob me of photos from an historic event in our city. It was time to make some new habits that would put me a position to be successful each time I shoot in the field.

When shooting in the field, it’s important to be reflexive to capture the moment. When the camera becomes an extension of your body, you become confident on the street, able to react when you see the shot.

Fiddling with the camera takes your attention away from where it should be, which is the scene. It robs you of your ability to “see.”

I decided to get into a routine to minimize the fiddling yet be prepared to make the shot when it presents itself.

So I came up with a simple system that has gotten me closer to my goal:

Zero Your Camera After Each Shoot

I can’t remember exactly who told me this, but they said, “After each shoot, zero out your camera,” which means set it to the same settings each time. The purpose is that your camera will be set exactly the same way every time you shoot so that you don’t have to think about it.

Your Zero (or base) settings can be anything, based upon how and where are you shoot and the camera you use.

I’ll give you my settings that I use but like everything else your mileage may differ. So here are my Zero settings:

This doesn’t mean that I shoot at these settings all the time. It just means that I know this is a base level that I have to make adjustments to based upon the conditions at the scene. It also means that I’m paying attention to this from the beginning and that I won’t have an unpleasant surprise when I later look at my work.

It’s also based upon the capabilities of my camera and how I work. For example you see that I typically shoot JPEG on the street. This is blasphemy to many people who only shoot RAW. But the Fuji JPEGs are so good I don’t bother shooting RAW unless I’m being paid. The same for white balance. Fuji’s auto white balance is quite good, but if I were shooting my Canon I would be more likely to set it to the white balance specific to the scene or set it manually.

End of the Day Routine

Setting my camera to “Zero” is part of a ritual I perform after every shoot which ensures everything is ready the next time I shoot and that I don’t have to look for anything. Much like Steve Jobs who wore the same clothes each day. It removed the necessity of deciding what to wear each morning. Here’s my routine after returning from a shoot:

This is actually a checklist I keep near my camera stuff to remind me to do it each time. I do the exact same thing when I travel. I know it sounds geeky, but I figure why clutter my mind with something I can lookup when I need it.

The next time I shoot, the camera is ready and I know exactly where to find it. This is the equivalent of putting your dishes and silverware in the same place every time. It prevents you from wasting time and mental energy deciding where to put things and looking for them when you need them. 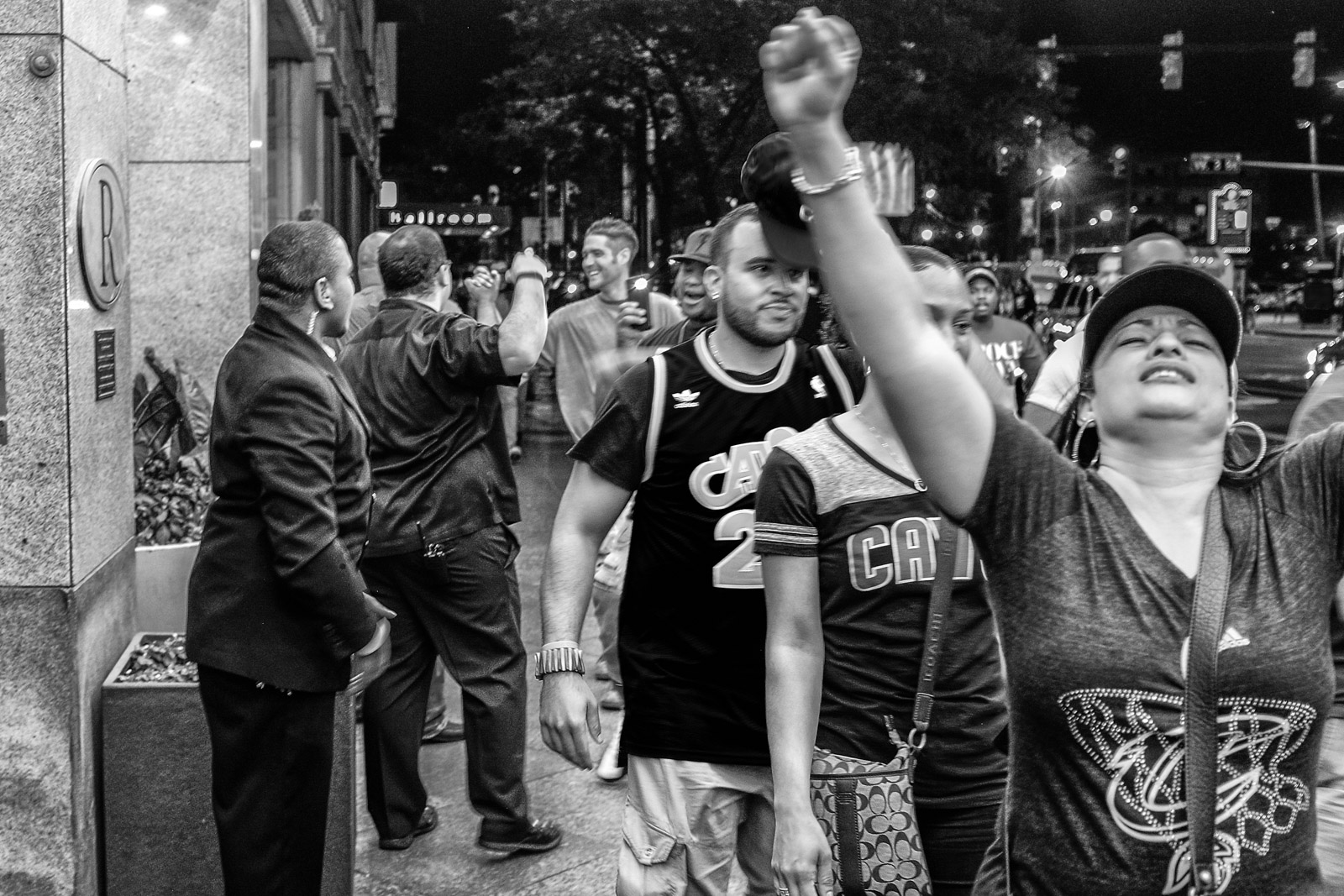 Well after the game ended I reviewed some shots and realized my mistake. I quickly increased my ISO and was able to make several good frames the rest of the night. 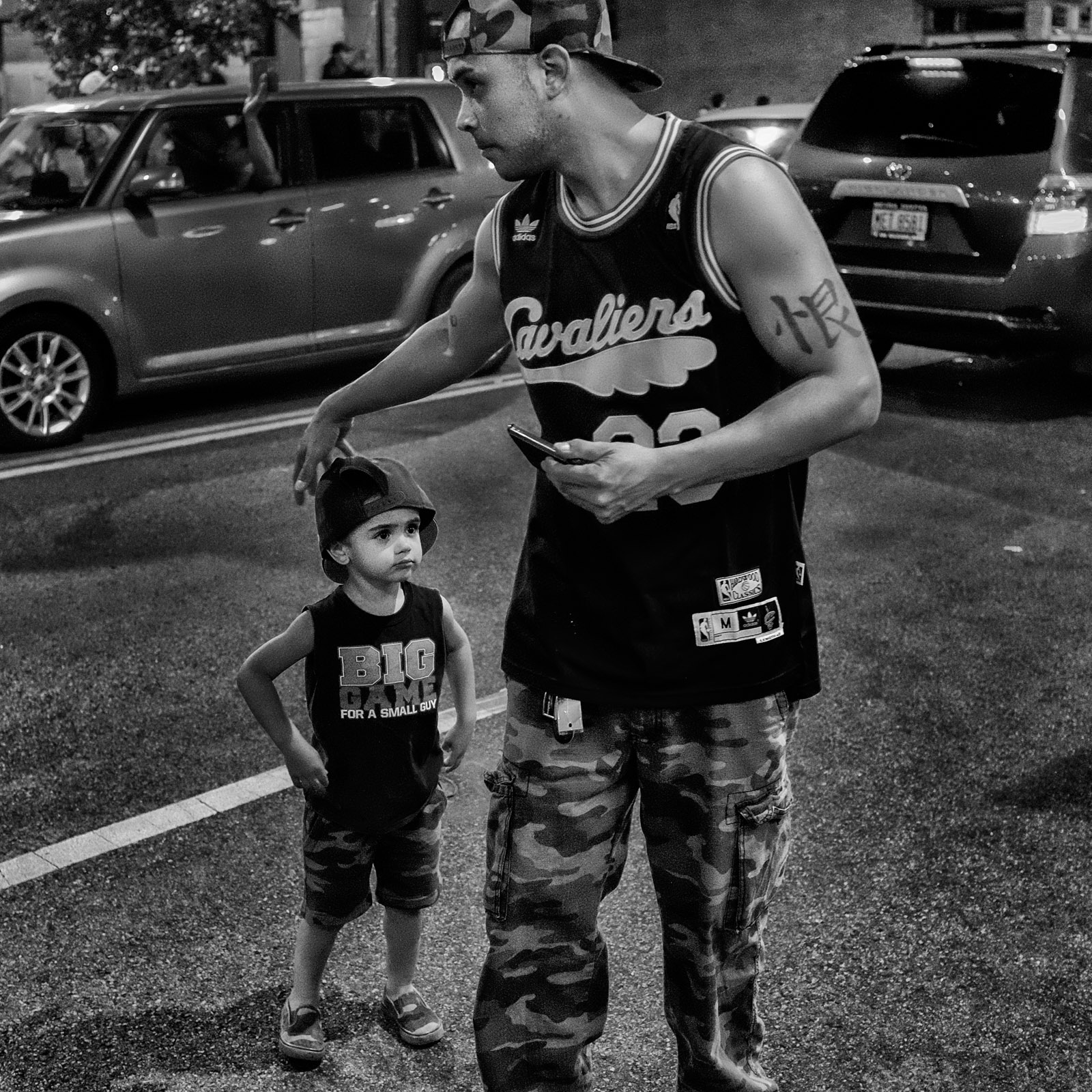 I can’t think of a better way to spend Father’s day than spending an historic evening with your son, like I did. I wish I could find this guy, I think he’s like a copy of this one that I made around 2:00 AM .

Very often I work from my Zero settings when I begin to shoot. However sometimes I’m faced with lighting conditions that require a big departure from my standard base. Rather than fiddle and decide in the field, I have a list of standard setting for those specific conditions.

When I find myself in one of those situations I quickly switch to the base setting for the current lighting condition and make minor adjustments as needed. I keep a list of the settings in an Apple note on my phone so that I don’t have to remember or guess each time. And I’m thinking about making a small sticker with the settings to stick on the bottom of my camera.

Old school photographers will recognize this as the Sunny 16 rule (Set aperture to f/16 and shutter to 1 over the ISO)
Note: My camera is spot on Sunny 16. Your mileage may vary. It’s the concept that matters.

I typically shoot with a Fuji X100F on the street so these are the settings that work best for me, my camera and the way I shoot. Your situation will likely be different. But the idea is to have a process to fall back on when you are in the heat of the moment.

Implementing this is easy. Here are the steps: