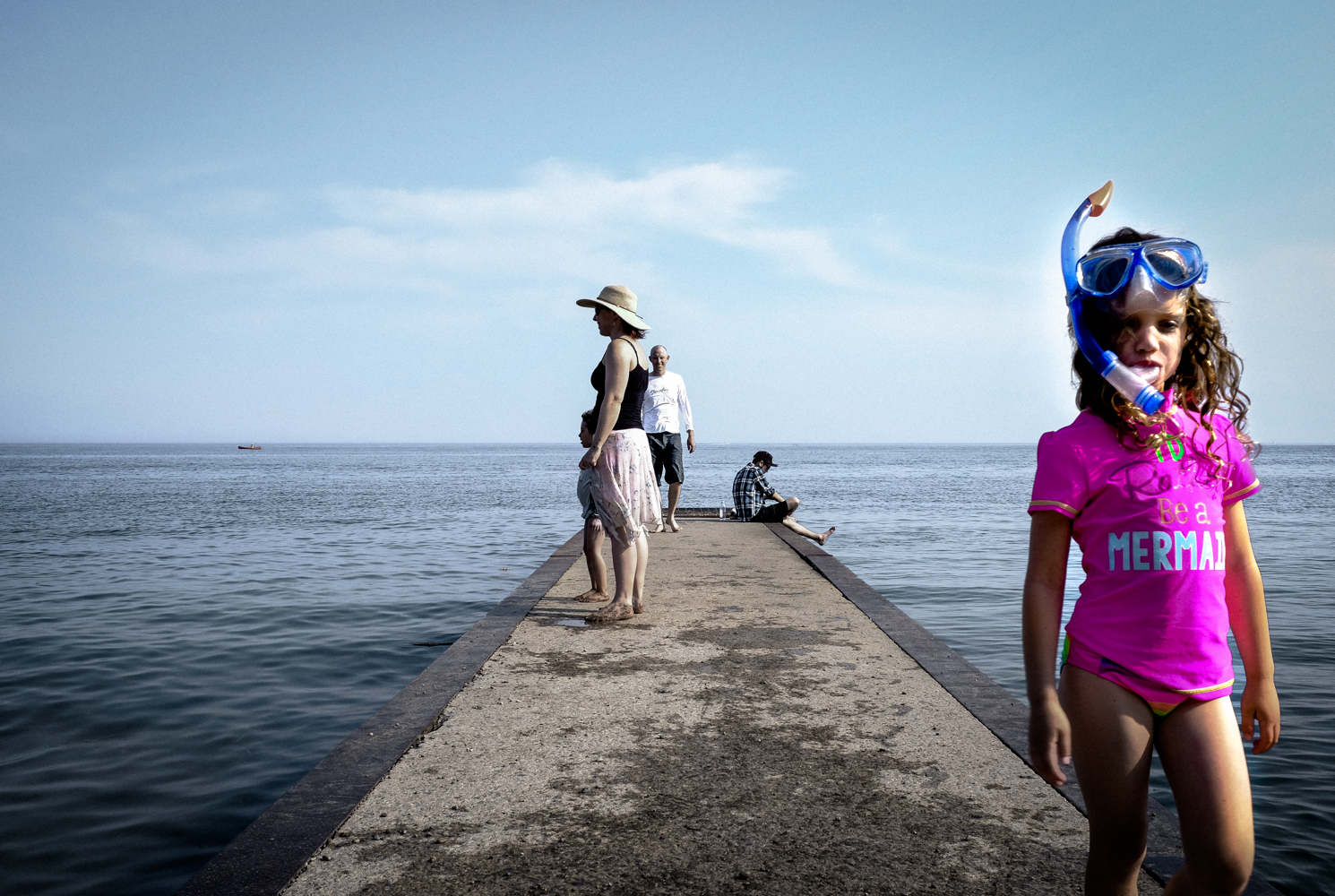 I am always looking for a story that I can crawl into. I make my living as an actor and a teacher of acting and my professional deformation is to reveal what lies beneath the surface of a character. So I have an insatiable curiosity about other people’s lives. How do you get through your day? What do you do? What do you think about? As a photographer observing behavior and telling myself stories about what I see on the streets keeps me in the zone of discovery. I’ve often wondered if I’ve hollowed out a part of myself only to make room for someone else’s life. When I see a scene on the street I’m caught between wanting to enter and become part of the narrative and needing to stay at a distance to capture what I see.

I live by water and every day I walk the Boardwalk to see lives unfold. People live their best lives by water, unencumbered by the city and its bidding. There is a settling of breath and body allowing a story to reveal itself. The armor of daily island living falls away and makes room for a devised theatre of connection.

The man on the dock taking a photograph of the rainbow, the sunbather rising from his position on the sand and the dog looking into the camera have not come here together but seem content to share this part of the Beach. After I took several shots, all at once, the players went their separate ways and the story changed.

In this article’s top image, the young girl’s slight swagger and her obvious pride in still wearing her snorkel as she exits the water centers this narrative for me. She is the Star of her life and the others are merely background performers.

A close friend was ill and wanting to amuse him I sent him this photo. Our hero has had enough of his drib drab life, exits his car and heads off for the surf. My friend was so delighted by this photo, he made a speedy recovery and promptly booked a flight to the Antarctic to meet the penguins.

How happy is the little stone
That rambles in the road alone,
And doesn’t care about careers,
And exigencies never fears;
Whose coat of elemental brown
A passing universe put on;
And independent as the sun,
Associates or glows alone,
Fulfilling absolute decree
In casual simplicity.

The small cluster of signs protesting Hunger is an anomaly in this Beach Community where every day is just another opportunity to swim and surf without a care in the world.

Seldom have I seen such abandon and joy. The little boy is very nearly in flight with his new friends on the beach.

It was the kind of blue that reminded me of another period in history, maybe the 50’s. I saw the little girl lean over to drink from the fountain and snapped the photograph. When I looked at it later I saw that she wasn’t actually drinking but rather leaning over the side looking at something in the dark.

Toronto is a multicultural city but the Beaches leans White. I’m pleased to say this is changing and here we are, all enjoying the day.

I watched these two for a long time. They moved together and apart and all the while I imagined a series of unfolding narratives from happy to sad to in between. I kept this one because of the small gesture of the woman’s hand with the water bottle. It seemed meaningful to me. And Eloquent.

I photograph on many streets in many cities but return again and again to make photos on The Beach.
These are part of a proposed exhibit and collaboration I am currently working on entitled, ‘Photos in Search of a Story’.

This story was originally published in the February 2019 issue of Street Photography Magazine.