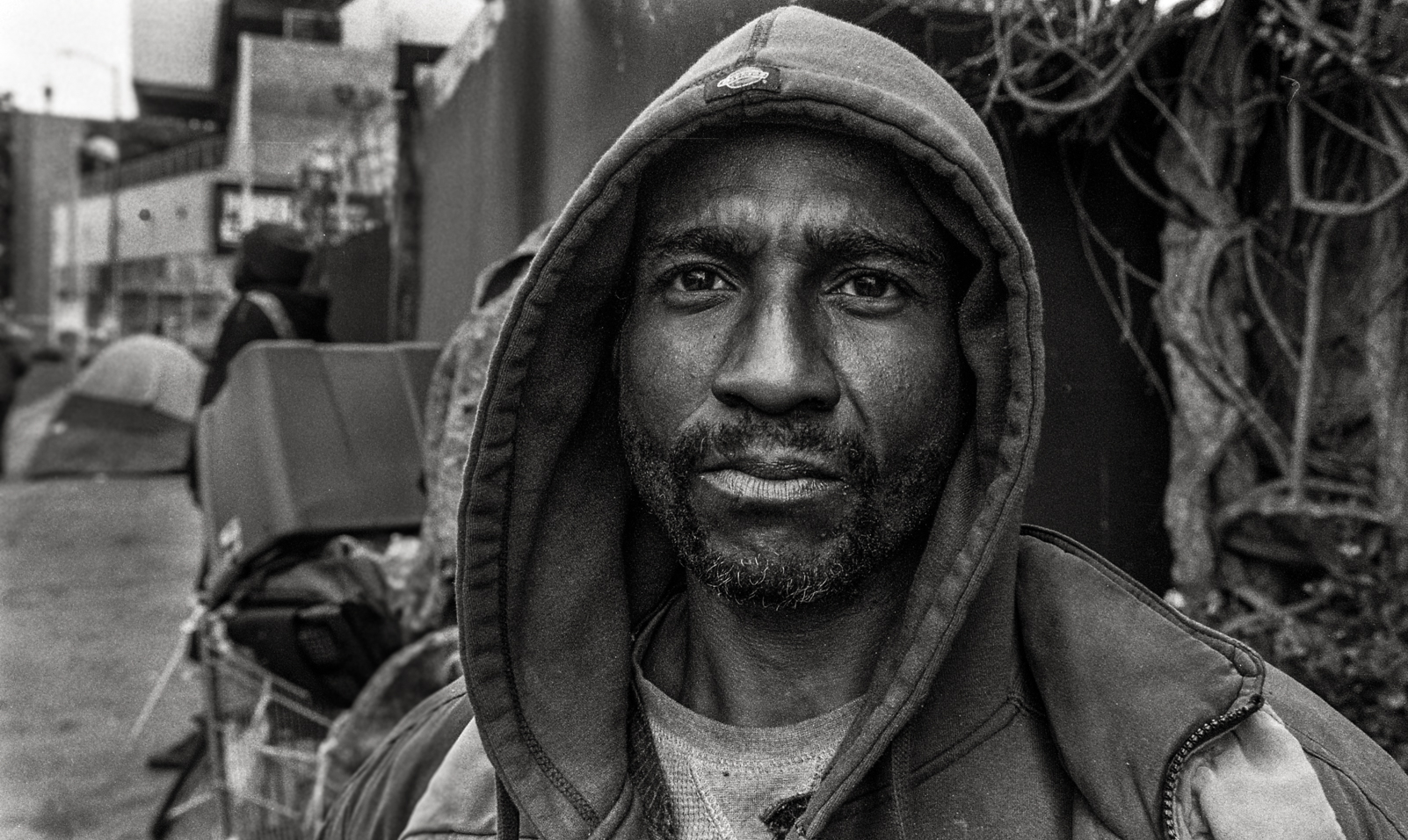 I woke up early and slipped quietly out of the boarding-house-style bed and breakfast where I was staying in the Haight-Ashbury district in San Francisco. Approaching the intersection of Haight and Central on foot, I noticed a man sitting on the sidewalk. Unshaven, clothes dirty and wrinkled, he appeared to have had a rough night. As I approached, he glanced up at me and softly asked, “Do you have some tobacco?”

“Help yourself,” he said. Making steady eye contact now, he seemed puzzled by my interest in him.

I said, “Do you mind if I ask if you spent the night on the street?”

As it appeared, he had slept out, and he smelled of alcohol.

I gave him my name, and explained that I was traveling the country to document homelessness in America.

Over the next half hour, Bill and I shared a conversation touching on constitutional law, Calvinist theology, addiction, and finally on the struggles of the homelessness.

“May I make a picture of you sitting here?” I asked.

He agreed. After making several images, I placed my camera back in my shoulder bag, pulled out my wallet, asked how much cigarettes cost in San Francisco, and handed Bill what he would need to buy a pack.

“Thank you,” he said, accepting the money from my hand.

A year earlier, when my wife, Cheri, and I were living in Taos, New Mexico, the thought occurred to me early one morning that I should draw on my distant background in photojournalism to document the current and growing crisis of homelessness in America.

At the time, I was making images of the northern New Mexico landscape, giving private photography tours, and managing a small art gallery.  Later than same day, I more or less wandered into a used book store. There, prominently displayed on the front table, was a copy of “Grab a Hunk of Light,” a book about the life and work of Depression-era photographer Dorothea Lang. Lang, of course, made the photograph, “Migrant Mother,” which became an iconic image of the Great Depression.

Coming across a book about Lang on the same day I first had the idea for a project documenting homelessness was something I took, not as a coincidence, but a message to move forward.

Within a few weeks, I found myself photographing and interviewing in Chicago, then in Los Angeles, and eventually in some 70 cities across the country, from Portland, Maine, to Orlando Florida, to San Diego, California, to Seattle, Washington. In late February of 2020, I made one final trip for the project, just before the COVID-19 pandemic led to a nationwide lockdown. I first flew to New York City to see an exhibit of Lang’s work at the Modern Museum of Art. From New York City, I traveled by Amtrak to Baltimore, Charlottesville, Atlanta, Birmingham, and finally to New Orleans, before flying home to New Mexico.

In developing a concept for the project, and later a strategy for completing it, I was mindful of several challenges, not the least of which is the fact that ours is a large country. Documenting homelessness as more than a local challenge faced by only a few of the nation’s largest cities would involve much time and travel. Then there is the question of how to visually document the current crisis without exploiting individuals experiencing homelessness.

Some see no justification for making images of persons when they are vulnerable. Acknowledging differing points of view on this, I believe there is a compelling need to both more fully document this sad reality of modern American life, and to raise public awareness to the extent of the homeless crisis. Even more importantly, I see a need to put a human face on this tragedy that affects more than half a million Americans.

Though some of the images in this project show the living conditions of the unhoused, the majority are street portraits. While I hope this work accurately illustrates the harsh living conditions on the street, I am even more interested in offering viewer an opportunity to see, not tents, but faces, and I hope some will, through these images, be able to look into the eyes of persons experiencing homelessness, and there make a human connection.

Certainly, experiencing a genuine human connection is what I sought as I made these images. After introducing myself, I would express interest in the person, as I did with Bill, and would then ask if I could make an image of them to be included in the project, which I explained would become a book, with the proceeds to be donated to homeless service providers. Very few people I approached asked not to be photographed. Many said they appreciated an opportunity to be seen and heard. After all, a common lament among persons experiencing homelessness is that they feel as if they are invisible.

In many of the cities where I photographed, I was also able to connect with local service providers to arrange interviews with persons housed in temporary shelters, and/or participating in recovery programs.

I met Angie in Oklahoma City. Angie first used drugs when an older boy in her high school offered her a joint. “I was just 15 and so excited to be invited to do anything with anyone,” she remembered. “Then some older boys, really they were men, said, ‘We have something else. Do you want to try this? It will make you feel really good.’ That’s when it all began,” she remembered.

Many years later, in a violent relationship increasingly fueled by alcohol and methamphetamines, Angie resolved to make it on her own, so she moved out of her boyfriend’s home and rented an apartment. Despite ongoing dependence on alcohol and meth, Angie mostly held things together on her own for a year.  Then one day a convenience store clerk, concerned by Angie’s erratic behavior, called the police. During her four months in jail, she lost her job, her car, and her apartment. “Especially if you have a drug problem, leaving an abusive relationship can lead to homelessness,” Angie explained.

Even so, Angie felt relieved that the clerk called the police. “When I got out of jail, I went back to that store and thanked her,” she said.

By couch surfing with friends for the next year, Angie avoided sleeping on the streets or in shelters. But failing another drug test led to a violation of probation charge, which resulted in her spending another 70 days in jail.

This time Angie won her freedom on the condition that she enter a residential drug-treatment program.  Because her vision had deteriorated so, Ange could not keep up with the required readings. “I couldn’t do the reading, and I couldn’t get help for my cataracts as long as I was in rehab. So, the judge released me,” she says.

It took Angie five months to get funding for her surgery.  Meantime, she returned to using meth. When she failed another test, the judge ordered her back to jail unless she could get a treatment center to admit her that day. “The City Rescue Mission here in Oklahoma City agreed to accept me.  Every other program had a three or four-day wait. I was so thankful to God. who plucked me out of that crazy behavior and put me here.”

Angie is following the Mission’s ten-month Bridge-to-Life recovery program. “Staying in this safe environment is giving me the chance to strengthen my faith,” she said.

After she completes the program, Angie plans to get a job so she can pay what she owes the state of Oklahoma in fines and probation fees. She is building a closer relationship with her 21-year-old son, and wants to write a memoir offering hope to others struggling with addiction and domestic violence.

Many women experiencing homelessness have stories much like Angie’s. What I learned, though, as I conducted more interviews, is that the causes of homelessness are quite varied. Every person has traveled his or her own unique path to homelessness.

Often, I would return to Santa Fe grateful for the selfless service being offered by thousands of homeless shelter works and other service providers across the country.  I also often found myself saddened and depressed by the scope of the challenges they face, yet encouraged by the success and turn-around stories I heard.

Though the economic crisis of the 1930s is nearly a century behind us, for many Americans without stable housing these are greatly depressing times. And so, wanting the images in this project to resonate with and echo an earlier time, I photographed exclusively with black and white film.  Working with film presented its challenges, particularly when passing through airport security.  On a trip to San Diego, where I planned to do some early morning and night photography, I took film too sensitive to light to be run through security scanners. Each roll of film had to be individually inspected, both as I departed from Albuquerque, and in San Diego as I returned. I am grateful to the TSA agents who were patient with me.

Over the next few months, I will be putting two-hundred or so images into a book to be titled, “Homeless in a Land of Plenty.” I will first seek a publisher, but will, if necessary self-publish the book, with the proceeds to go to several national organizations dedicated to addressing the homeless crisis, including the National Coalition for the Homeless, and the National Alliance to End Homelessness.