In a recent blog post I wrote that I’d purchased the XF35 & XF60 Fuji lenses as replacements for the XF18-55mm Zoom. I couldn’t wait to put them through their paces and discover if this was indeed the right choice . . .

. . . Living as I do in the UK’s equivalent of the Australian Outback (Cumbria), Street Photography would appear to be an odd choice of hobby. My predicament was recently made all the more unbearable with these two new lenses that desperately needed trying out. Fortunately, a 30 mile trip to Barrow-In-Furness came up unexpectedly, so I jumped at the chance to spend a couple of hours taking photo’s with the new ‘tools of the trade’.

This test will be split into two sections, the XF35 & XF60. As I’ve mentioned before, my favorite focal length for Street was always a 90mm (XF60 in 35mm film terms), so that was the first lens I tried. I didn’t have to wait long for the first photo opportunity.

Shortly after I’d arrived (and was waiting for the Wife outside a shop), this shot suddenly presented itself. 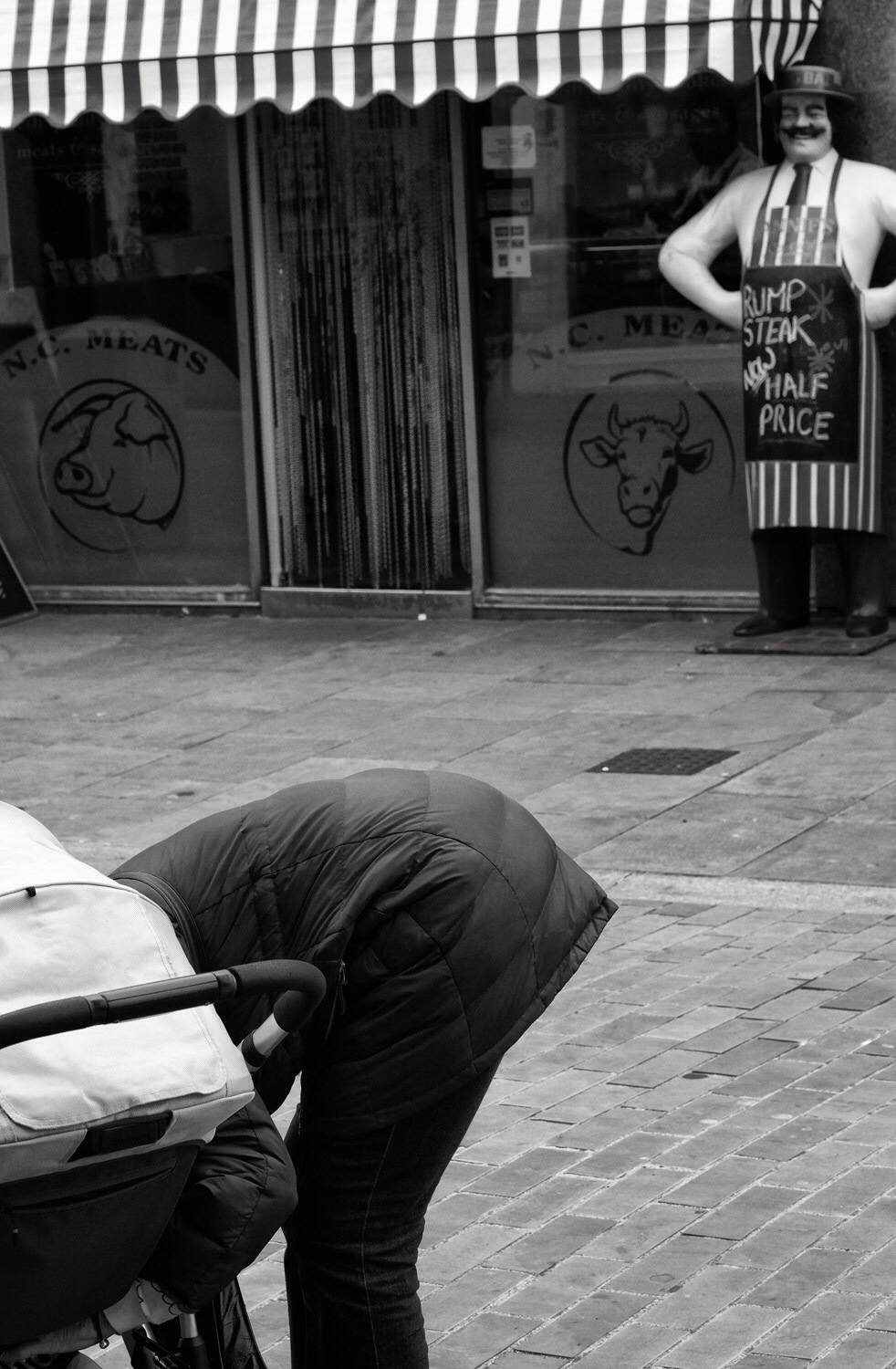 It was a sunny day, so the X-E1 was already set to 500th/sec, f/11, maximum Auto ISO 3200, Base ISO 400 and Manual Focus at approximately 3m. A fast reaction time was essential if I wasn’t to miss the shot. This was literally the first picture taken with the XF60 in the ‘heat of battle’ and with no firm idea of the field of view available from this lens, I practically ‘threw’ myself against the opposite building, framed and clicked. Needless to say, despite a preference for not reviewing shots, for once I gave into temptation.

Shortly afterwards and further along the High Street, another opportunity appeared. This time though I had a moment to manually focus, but due to the 5mm increase in focal length over the 55mm portion of the old zoom, I was caught slightly short with the framing. 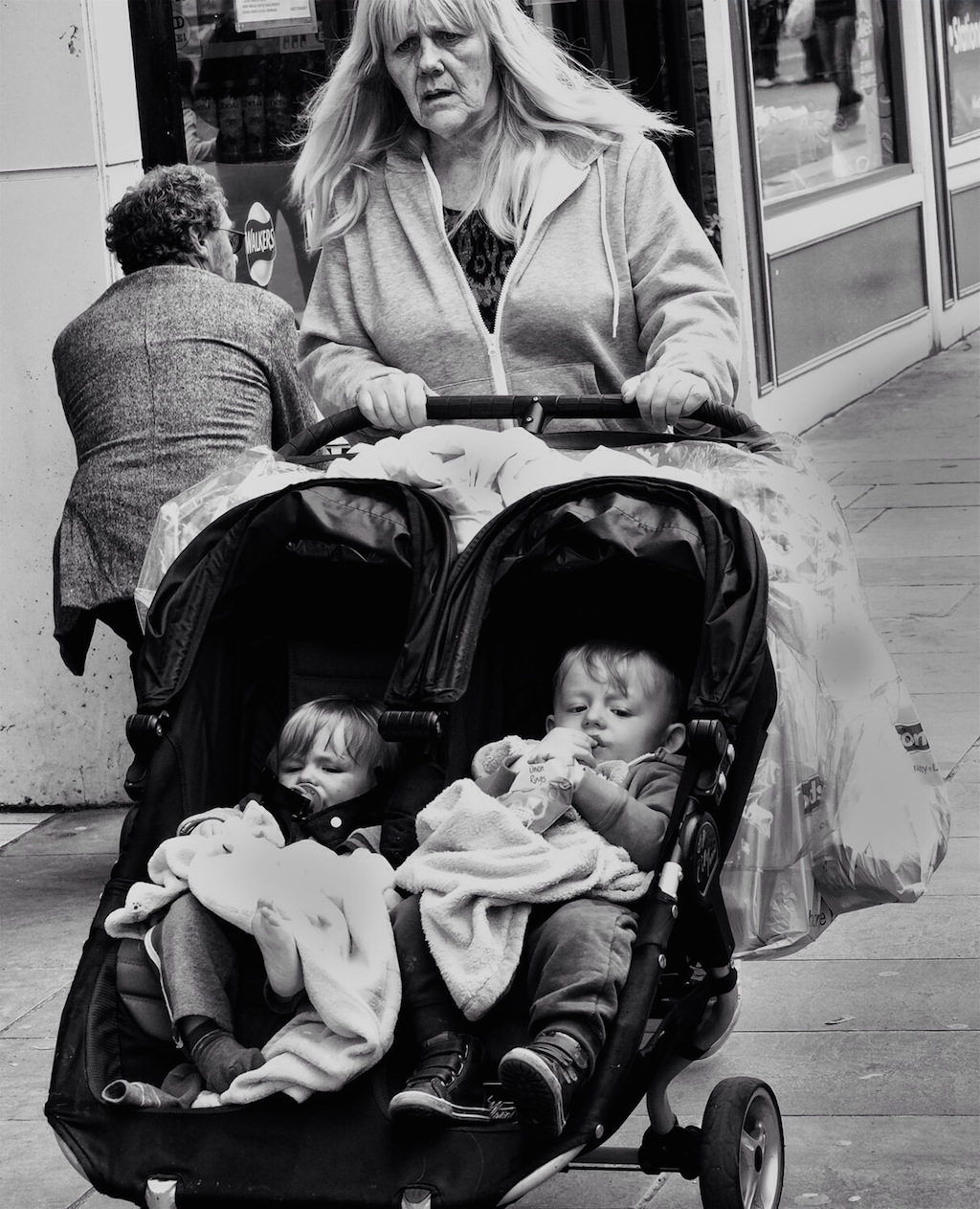 Still, I think with this shot the ‘tightness’ works to its advantage and nicely captures the overwhelmed expression of the woman.

By now I was starting to relax a bit. The XF60 had put two shots ‘in the bag’, with no hiccups (except the framing). In fact, the lens was all but disappearing from my mind, unlike with the 18-55 which was a constant blur of zoom, focus, aperture, framing etc. The XF60 was beginning to feel how a solid and reliable prime lens should – a simple fluid process of framing, focus, click. 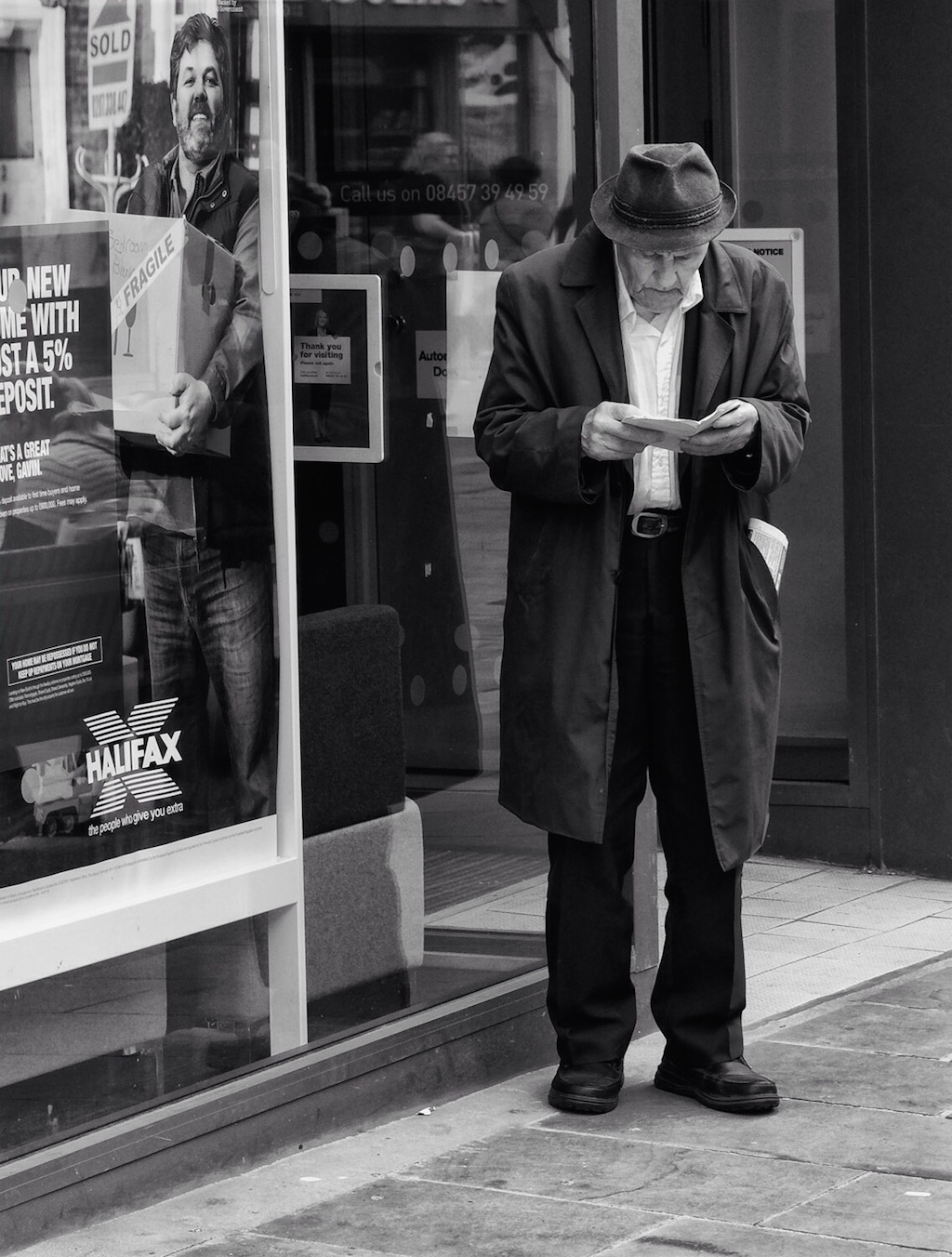 The beauty (for me) of a 90mm focal length, is that as I prefer to give my subjects a bit of ‘space’ (or I just lack confidence?), I can often quietly ‘observe’ around the periphery of my subjects and wait for the moment when the scene looks right . . . 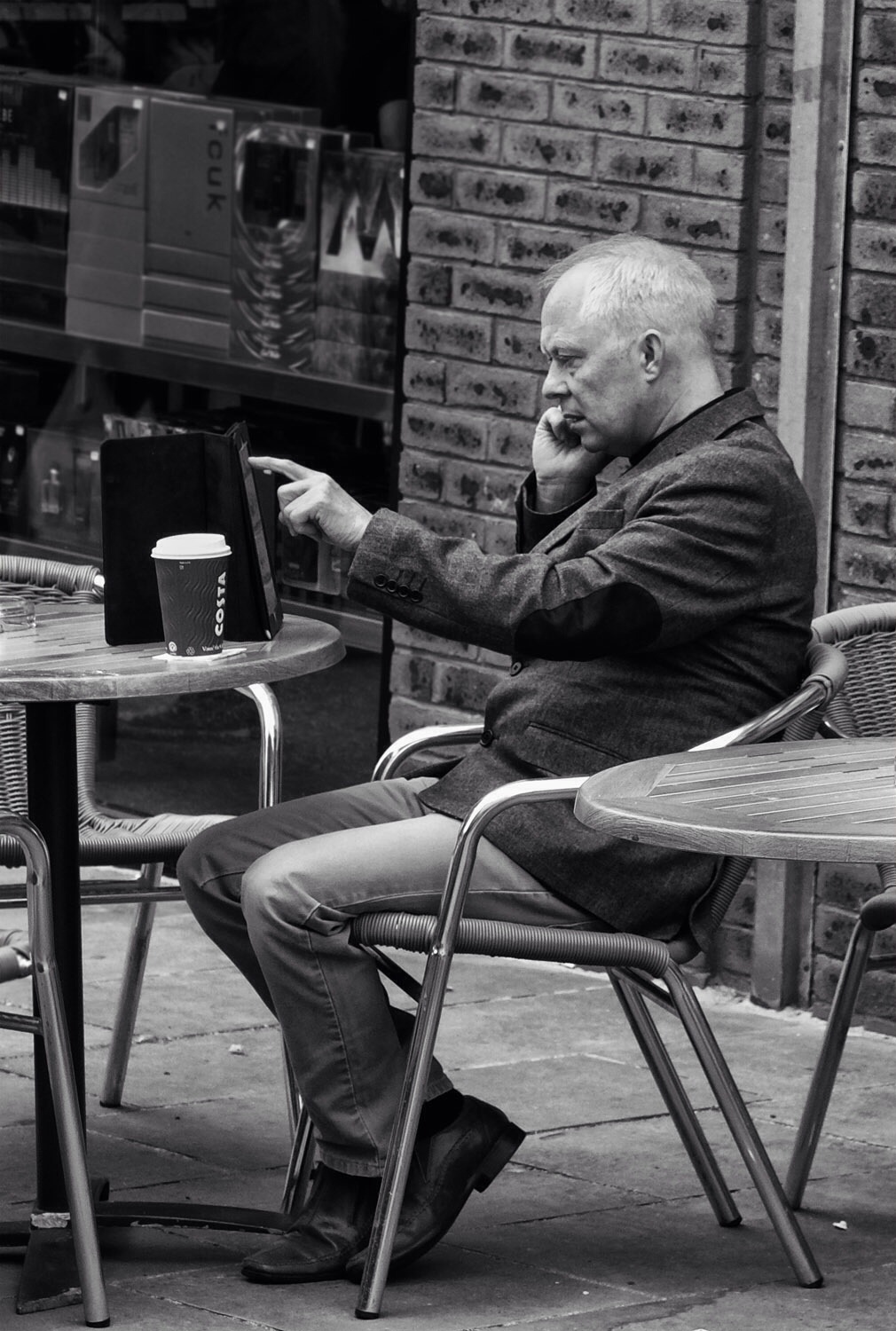 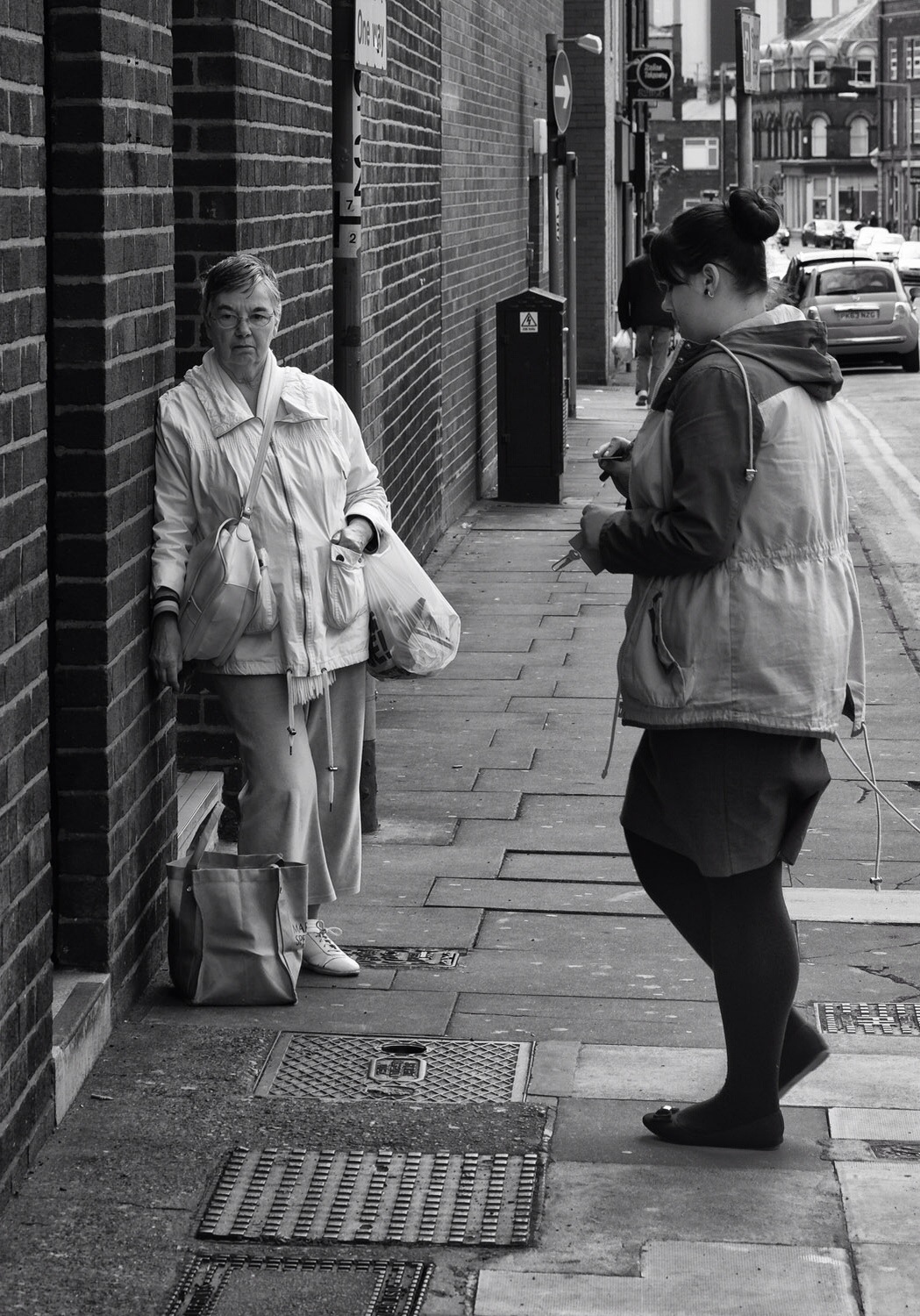 By now, my Wife and I had decided to grab a bite to eat, which gave an opportunity to reflect on my inaugural experience with the XF60.

Firstly (and as mentioned in the previous post), I can confirm that (at least as far as the Manual Focus brigade are concerned), the XF60 f/2.4 is a very capable Street Photography Lens and not just suited for Macro shots of flowers or portraits.

Also, despite the length of the lens with hood, it never became a ‘pain in the wrist’ to carry the camera around ‘street style’ in the hand.

So after lunch, it was back to the picture taking and the turn of the XF35 f/1.4.

Surprisingly, after carrying the XF60 around for an hour, there was no noticeable change in weight or balance of the camera after changing to the XF35.

One big difference though was the ‘feel’ it instantly gave to the setup. This lens looks and behaves exactly like a serious prime lens from days of old. Short and compact, with a slippery smooth feel to the aperture ring and (with several firmware improvements), highly responsive manual focus. Indeed, it is possible to cover all of the ‘most useful’ range with just a half-turn of the barrel.

Of course, with a change of focal length comes a change of subject matter (for me at least) 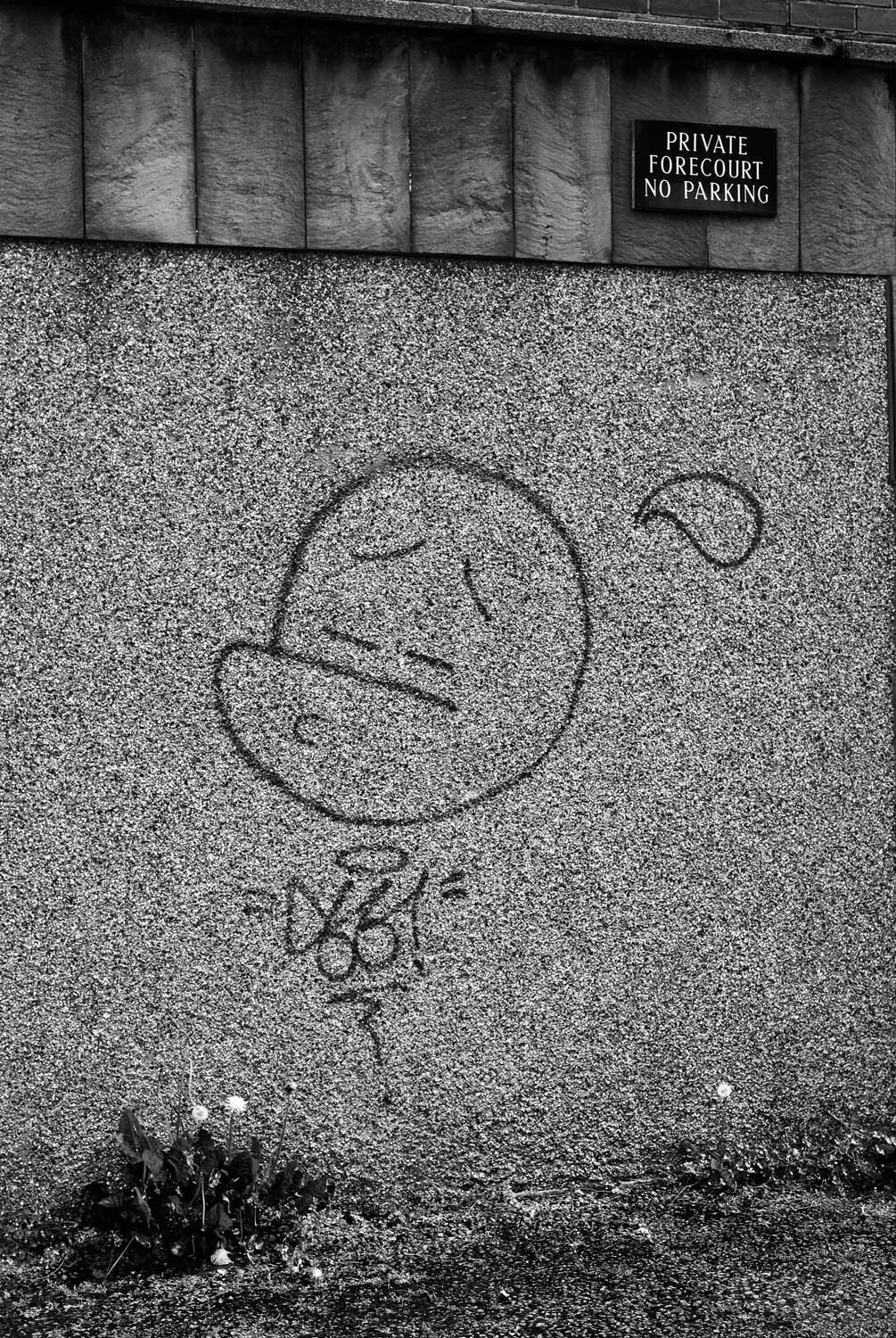 With the surprisingly useful Focus Peaking, it was a breeze to lock onto even the ‘grittiest’ scene such as the one above and with the wider field of view afforded, I was able to see the wider picture . . . 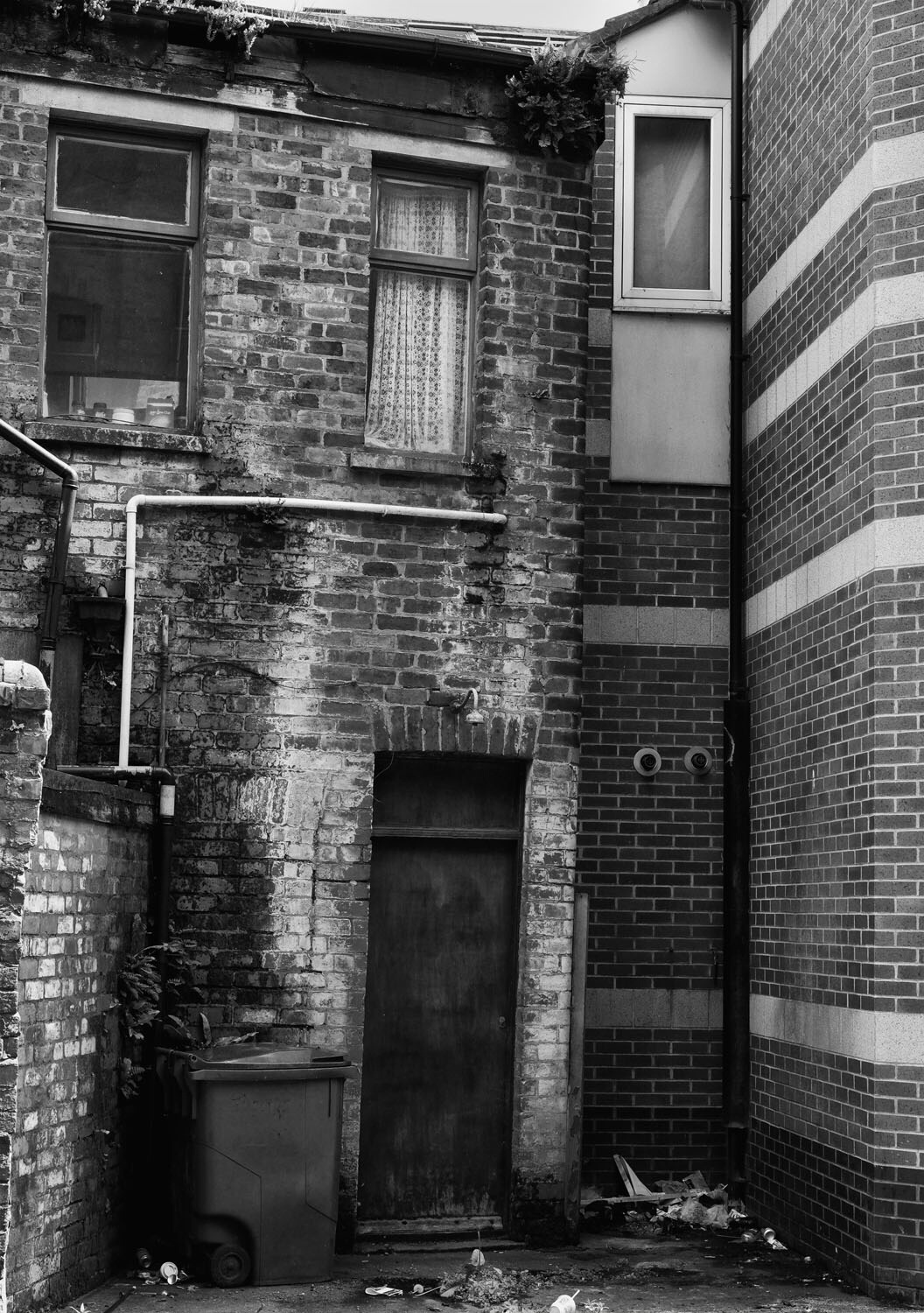 The Dynamic Range provided by the X-E1, coupled with the Resolving Power of the XF35, meant that even usually difficult to meter scenes were evenly captured. 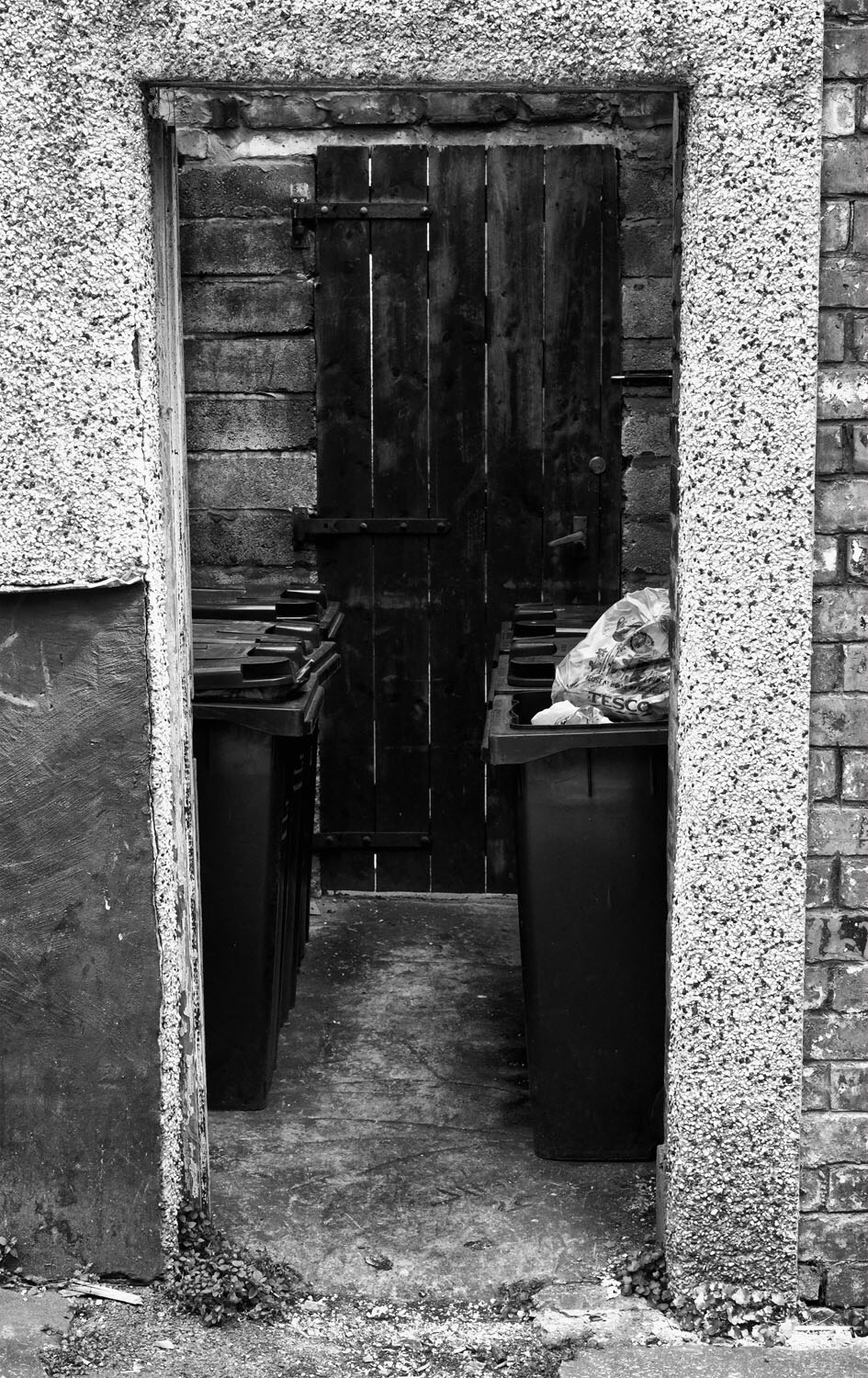 The 52mm equivalent focal length of the XF35 is an ideal size for capturing a wide range of subject matter – long enough to get close, wide enough to fit everything in the shot. 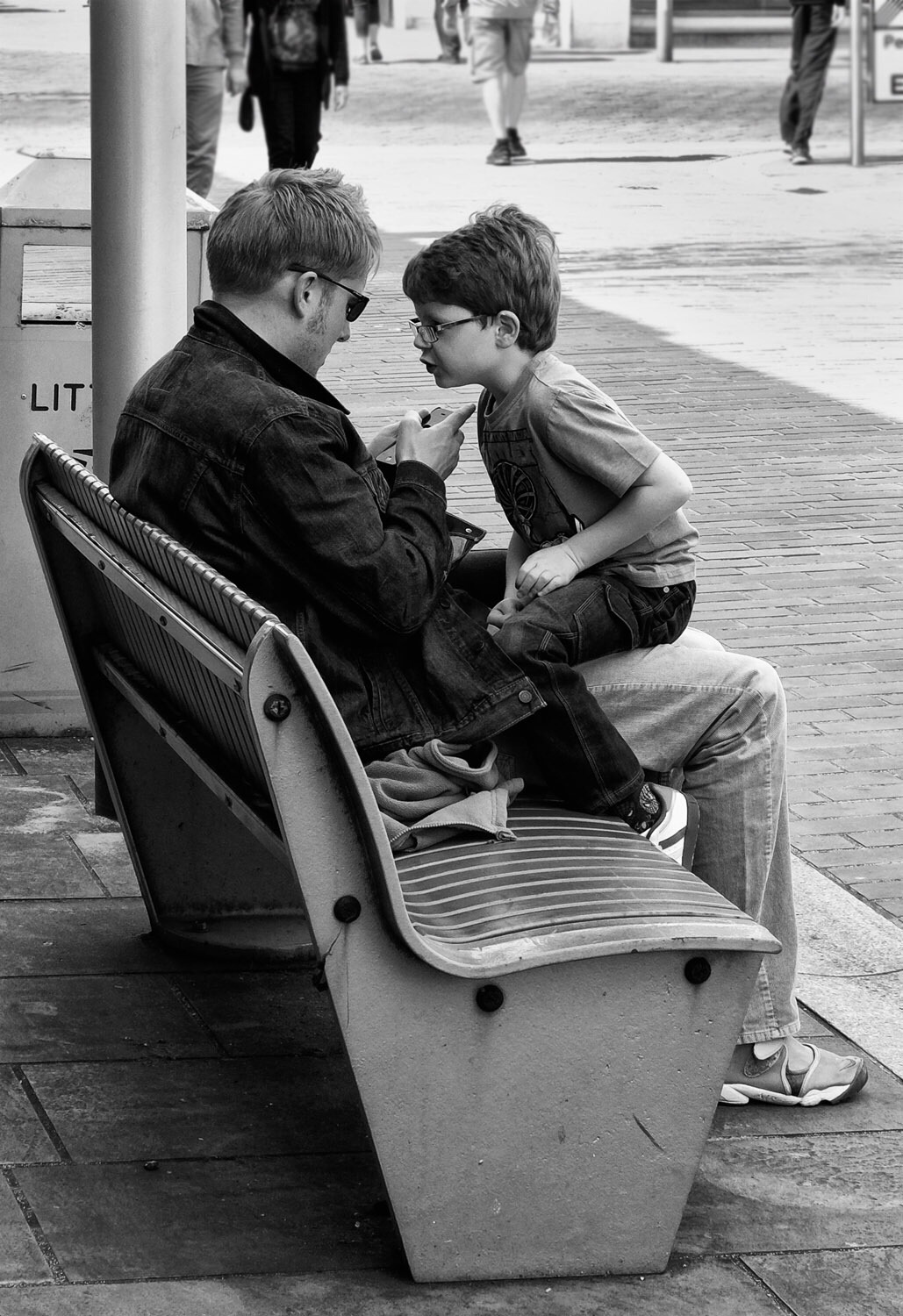 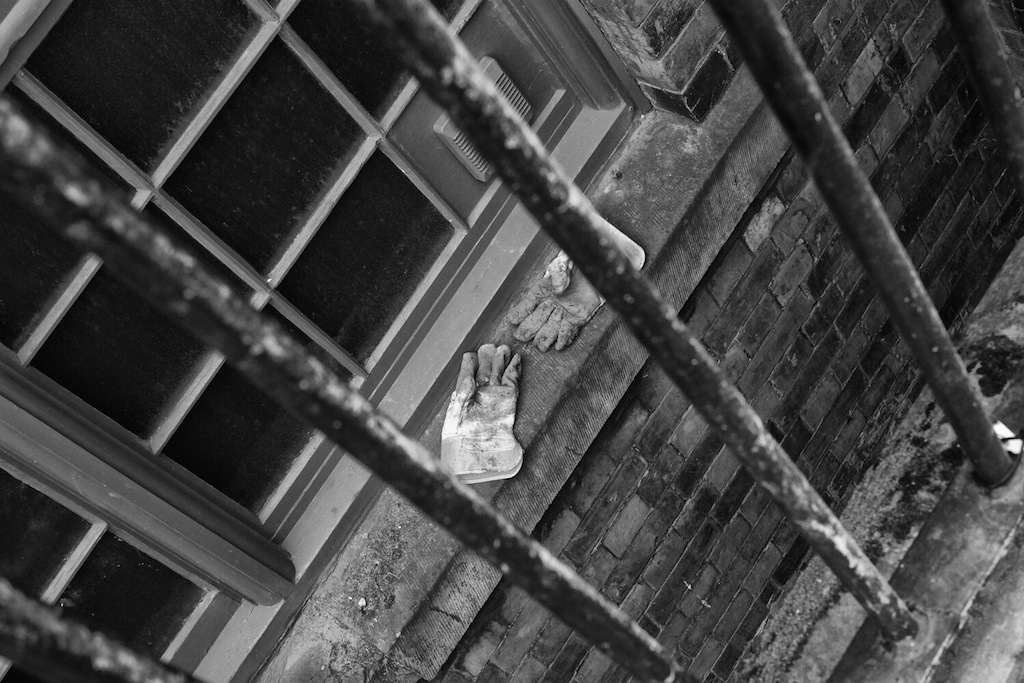 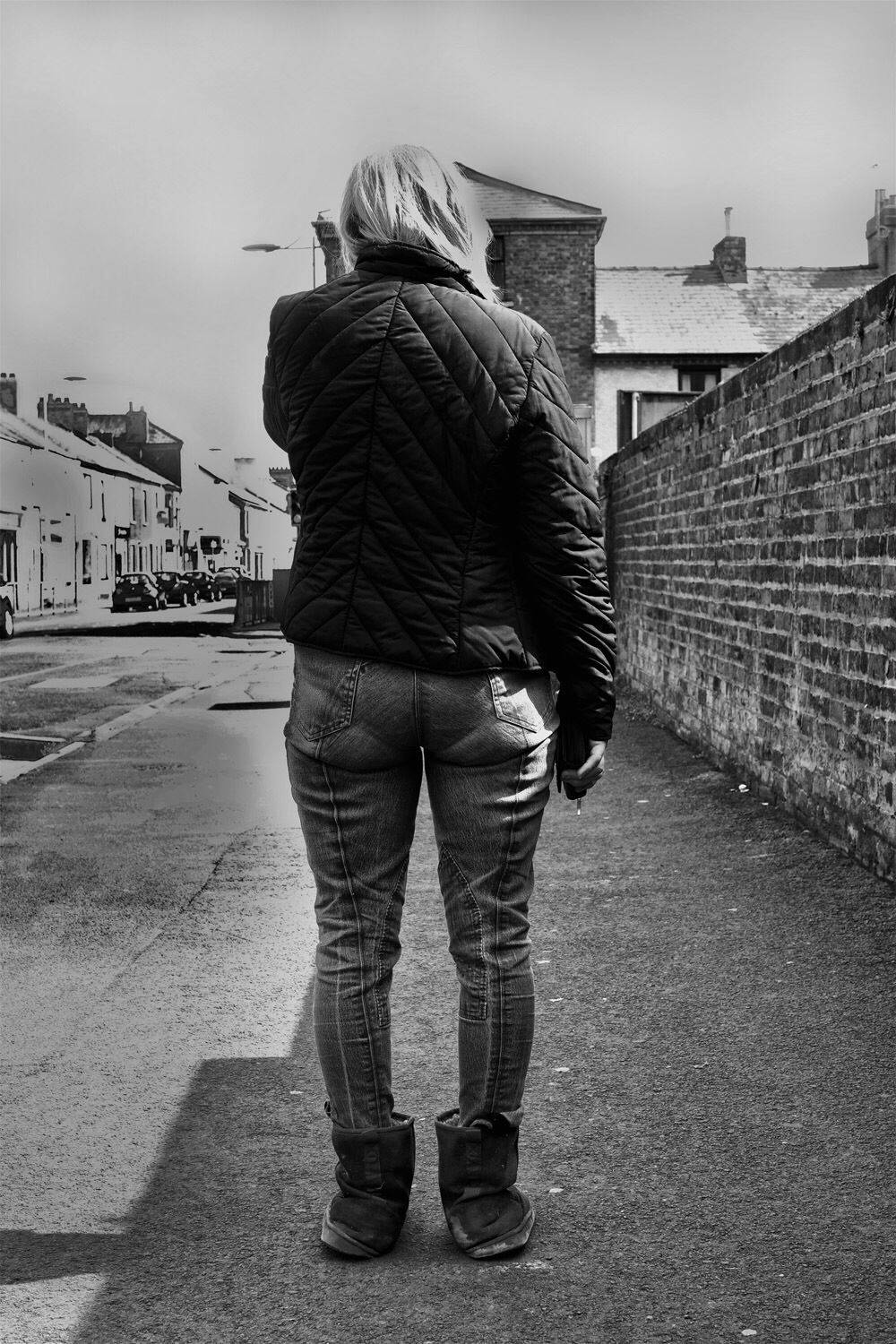 The 50mm focal length is ideal for most situations. 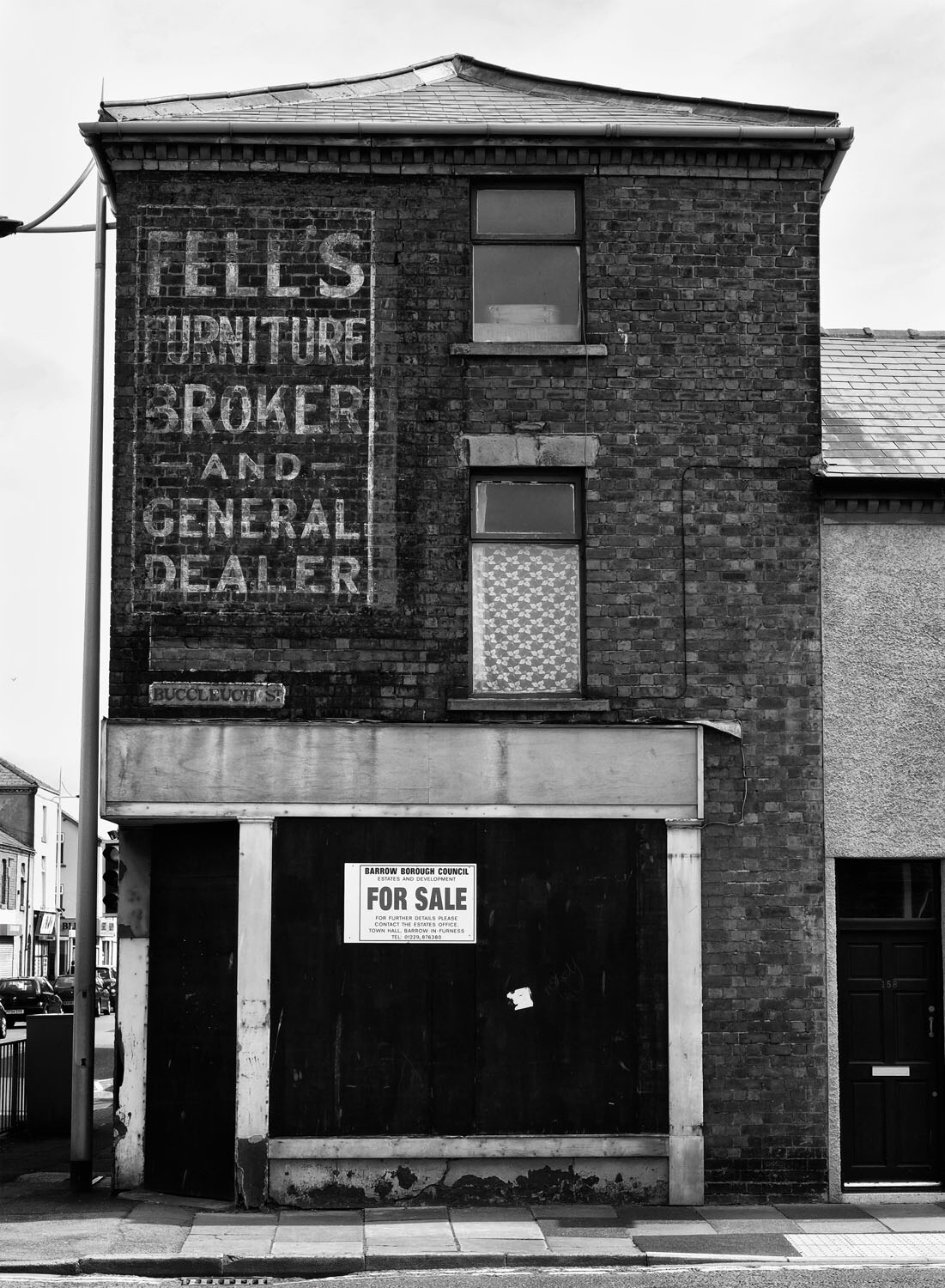 To summarize then, I can safely say that selling the 18-55 and buying the XF35 & XF60 was a sound decision. The XF60 in particular was a delight to use. The effective focal length of 90mm provides me with a working distance that I feel most comfortable with. The speed and precision with which I could arrive at and fine tune the focus manually, meant that I was able to react more quickly, without the extra (and time consuming) task of adjusting focal length, fiddling for the focus ring and being unaware beforehand of the aperture setting, as with the 18-55 zoom. The extra ‘stops’ of aperture are a bonus as well.

There is however, an observation with the XF60 that has caused me to change one particular habit (for the better). I had become slightly ‘lazy’ and reliant on the AE-L/AF-L button. In manual focus mode with the 18-55, a routine had developed of aiming the focus rectangle at the subject and hitting the button to ‘snap’ the focus on target. However with the XF60, if the ‘rectangle’ wasn’t pointing directly at the subject (or another nearby), the lens would auto-focus through it’s entire range, from far to wide including Macro. Believe me, this can take a very long time and means that the intended ‘moment’ has long passed. Needless to say, I now manual focus entirely, which is a joy with the XF60.

The biggest and most unexpected revelation though, was the XF35. Sure I was well aware of the superb image quality, but for me the speed with which focus could be achieved, the overall tactile feel and all around usefulness of the focal length, means this lens will be mounted more often than first imagined. Previously I had anticipated that the XF60 would account for 90% of my shooting. It now looks as though this figure could be more like 50-50.

Finally, I’m not usually a superstitious type but ‘something’ happened in Barrow today. The sky was blue, the sun was warm, the streets were unusually busy and subject matter of interest seemed to appear from all directions, one after the other.

Was this really down to me buying two new lenses? Only time will tell.