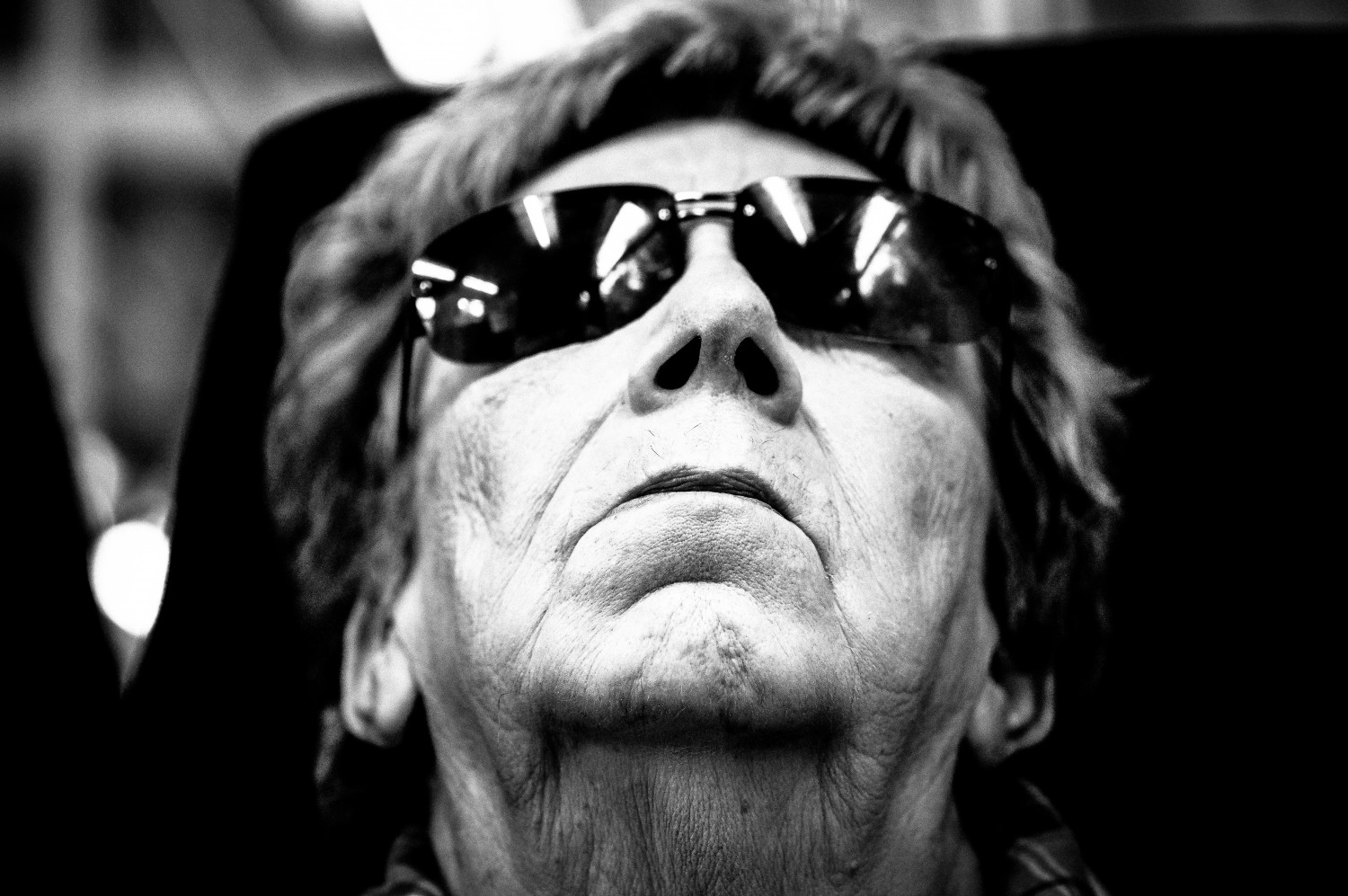 In fairness, I HAD intended to buy an X100f…

I needed a nice ‘day to day’ camera, mainly for street shooting. Something small that I could pack in my work bag everyday. The X70 looked good for a while, and I love shooting wide, but it was getting a bit long in the tooth…no view finder…and discontinued.

The X100f looked pretty good to me, initially. Familiar controls and settings (I have an X-Pro 2), tried and tested sensor, good reliability, lovely ergonomics, responsive, and of course, its looks – gotta love those looks. It’s a hot camera.

That (23mm) lens, though. I didn’t feel confident about that lens. It had proved to be a winner on the original 12mp X100. It did pretty well on the X100s/t too…but I was underwhelmed with the results I saw with the X100f – especially on close focus. It was really soft on anything closer than a metre wide open. I like to shoot street wide open AND close…I like separation if I can get it…but this was too soft. And honestly, it SHOULDN’T be soft. Its a £1200 ($1400) camera…

Honestly, there is a plethora of top-end APS-C compacts to choose from…The Ricoh GR, obviously. Compact, sleek, great lens – it was tempting. The Sigma DP Merrills look really good too – but limited with battery life and editing options (and the latest versions DO look a bit weird). I didn’t fancy a zoom – I’m a prime user – and as much as the micro four thirds (and one inch sensor) have improved – I have previously owned a Nikon 1 and Samsung NX mini – the images always looked too much like snapshots to me, and anything over 1600ISO looked like sand.

I had resisted full frame my whole shooting life (if you don’t include film) and was always at peace with it. I’m a street shooter, mainly, and full frame was never going to be a deal breaker for what I shoot. Both the X-Pro1 and X-Pro2 had fully satisfied my shooting experience. I had wished Lightroom was up to speed with the X-trans files, but this wasn’t Fujifilm’s fault. The cameras were, and are, fantastic – as were the XF primes.

I didn’t need a high mega pixel count. 24mp is really as much as I’d ever want (I was actually really happy with 16mp too) and unless you’re an absolute cropping fiend, should be absolutely adequate for any street photographer.

A high quality fixed lens, 35mm equivalent or wider would suit me. A durable body, not necessarily weather sealed, but metal, well made and solid. Pro standard – it’ll be packed into my work bag everyday after all, and I’ll need something reliable and ready for day to day usage. Fast AF? Not of paramount importance. I’d been using hyperfocal settings more and more with manual glass on my X-Pro 2 – and doing fine: 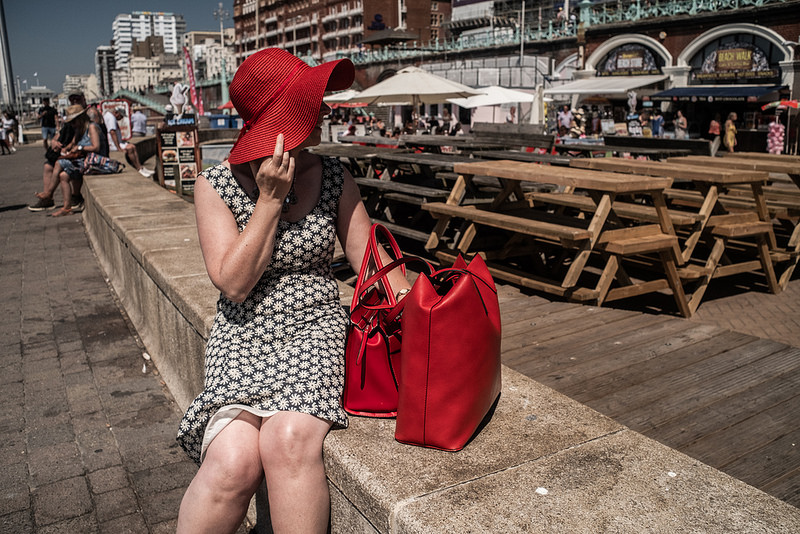 ….but the shutter button needed to be absolutely responsive. Even the X-Pro would let me down there, and yes, even set to manual focus. No shutter lag whatsoever was a priority. As was stealth…It needed it to be quiet and small too. Not jeans pocket small, but small enough not to intimidate or attract attention.

At this point, I really couldn’t believe what I was about to do… 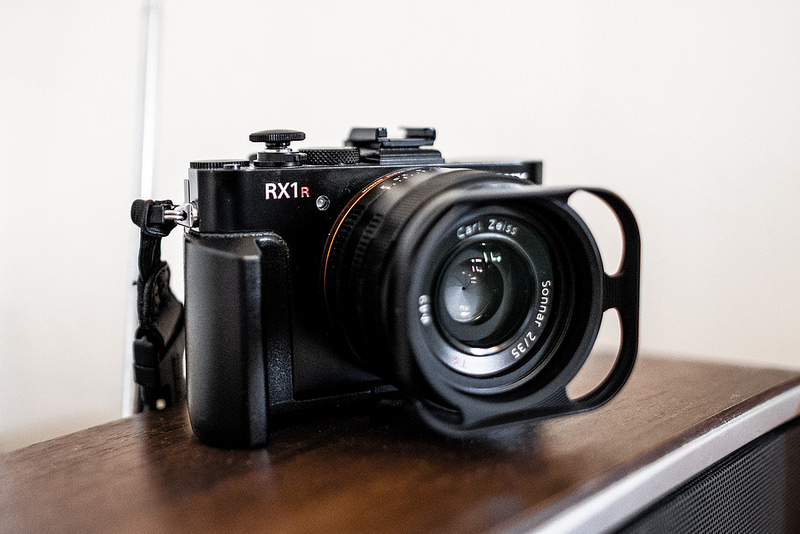 Yup – on paper the Sony RX1r fit the bill. Sure, it was ‘old tech’ too – almost five years old as I write this, but it had so much in its favour too, especially for what I shoot. I got this mint copy, with an EVF (attached via the hotshoe) a leather ever ready case, a hood, thumb grip, a couple of batteries and charger for slightly less than what I would have paid for a new X100f. It was a sound deal.

Its not a straightforward camera (in theory or in use), by any means, but lets focus on what is good first. 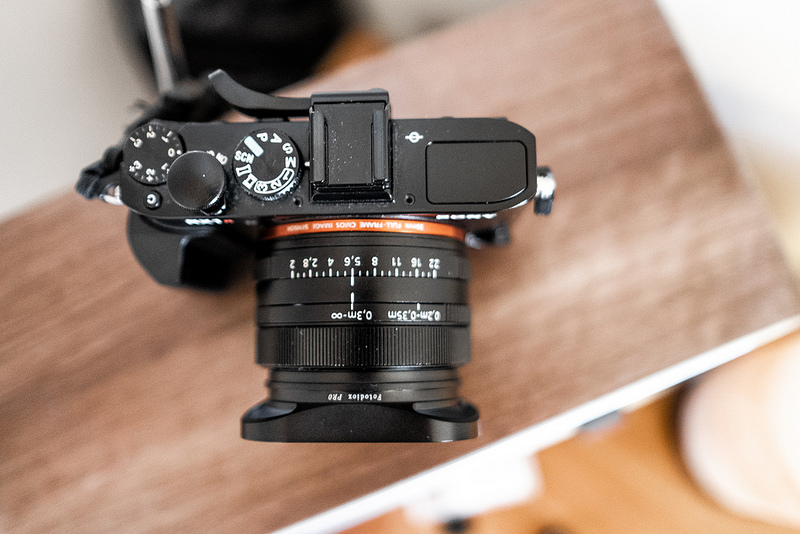 ….that’s right, its almost touching the back plate. The rear of the lens is embedded deep into the camera body offering premium optical performance due to its close proximity to the sensor. There is no way this camera could have been designed with anything other than a fixed prime lens. It was built to offer the user the absolute maximum in image quality, and from what I’ve seen so far I would confirm this to be the case. The images are absolutely incredible. This was shot through a filthy window on London’s DLR transport system on the approach to Canary Wharf station. (F8 @ 250th/sec) 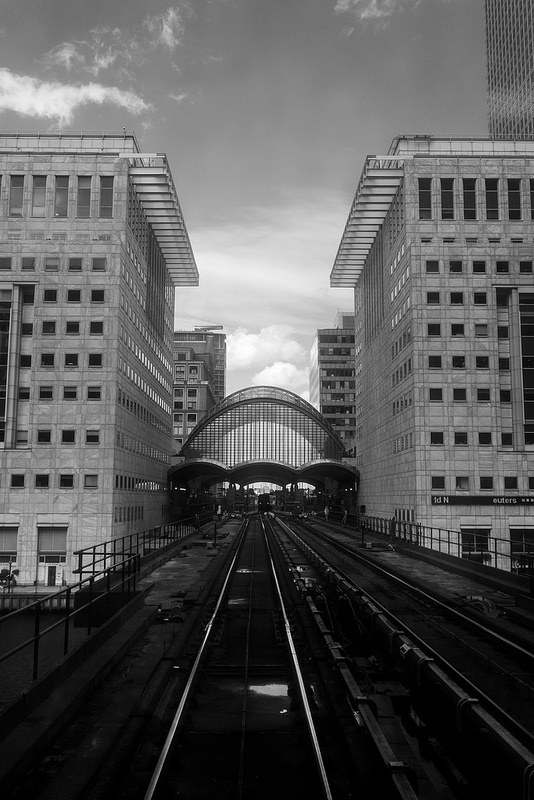 Its near perfect in terms of sharpness and resolution. And that’s with a GOBE UV filter on too (for the record, I put clear/UV filters on all my lenses).

2) LENS. I like to think I know glass. I’ve been shooting with ‘something’ pretty much my whole life from the age of about 14 (with a nine year gap in the middle – it’s OK, I’m getting creaky). I know what a good lens is. My Fujinon XF60 is right up there for sharpness and detail. My old OM Zuiko 100mm f2.8 is gorgeous for portraits. My Pentax Takumar 90mm for my old 6×7 is glorious with colour – and probably my favourite of all – the Zeiss 45mm Planar for the Contax G series. All beautiful glass. But this one has them all beat. 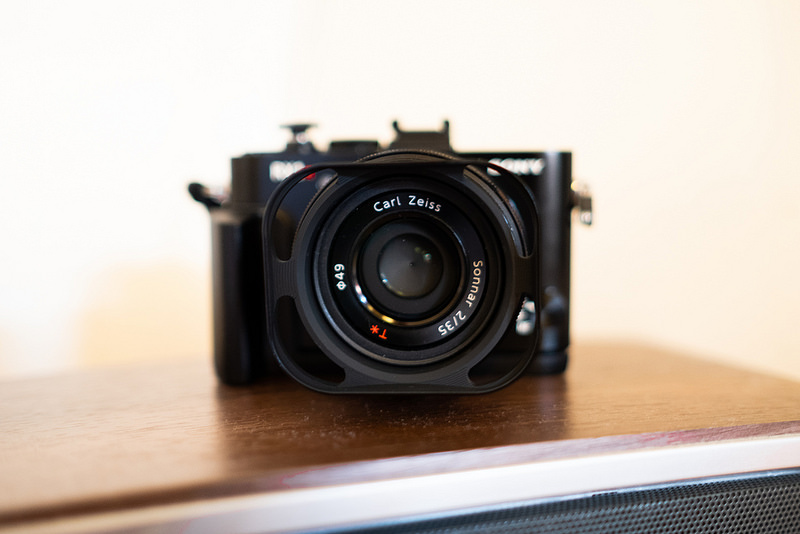 The Carl Zeiss 35mm F2 Sonnar is the finest optic I have ever shot with. Period. The first sharp picture I was able to pull out of Lightroom was met with the ‘F-word’…not once. 6 times. I’m not joking. I thought the Fujinon’s had set the bar pretty high – and they are REALLY GOOD LENSES – but this was a whole new experience for me. The sharpness, the resolution, the ‘look’, the rendering, the colours, the bokeh, the detail…the EVERYTHING. Worth every curse word…I mean, really. Just look at it. Dang. My only regret is that I cant take it off and adapt it for my X-Pro. 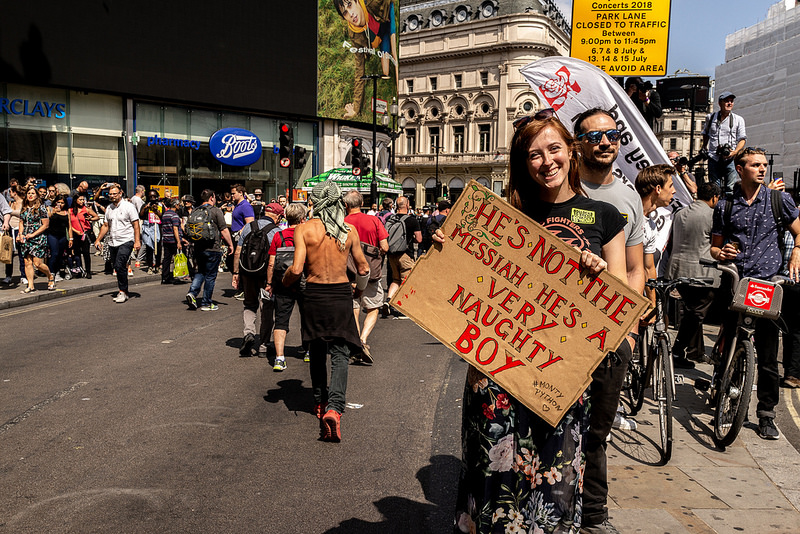 3) Build Quality. Yes, very good indeed. Metal bodied (as it should be), sturdy controls, solid feeling. Battery door, hinges, leather trim – all right and proper. A well-mannered aperture ring as smooth and buttery as well, butter…if butter could ‘click’. Yeah, it’s professional all right. Dare I say, higher in build quality than the X-Pro 2? Yes, a smidge. Its not weather sealed, though – but it is designed and made for professional daily use. 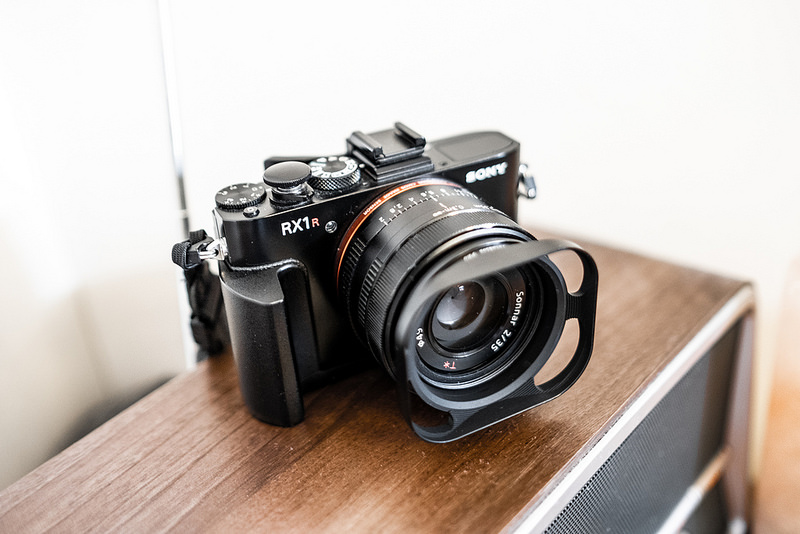 So those are the GOOD things. I should also mention the sensor as it is a very good one – though certainly not quite up there with the best that’s out there now. Its a 24mp C.MOS with the anti-aliasing filter removed. This is supposed to enhance resolution (hence the ‘R’) but at a risk of moiré patterning. So far, I have not noticed this, but that’s not to say I won’t. I could’ve got the standard RX1 a bit cheaper, but I like the sharpness of my X-Trans III so I figured I would get the full-frame equivalent. Certainly, in ISO/low light terms at least, I’ve found this full frame sensor out performing the Fuji APS-C version by about a stop, maybe a stop and a half. Impressive when you consider there is a few years difference between the two. ISO6400 has me a bit nervous on the X-Pro. Not so the RX1r.

4) Leaf Shutter – in common with the Fujifilm X100f (and I think all of the X100 versions), the RX1r has a leaf shutter built in to the lens. This has two main benefits – silent operation AND fast flash sync speeds (in the Sony’s case this is 1/2000th of a second). Neither really benefit me. I rarely use flash (in fact, I don’t even know it’s there) and silent operation, whilst kinda cool, is of little use in London where it’s about as loud as an airport runway most days anyway. Cool feature though, and I’m glad I have it.

The bad can really be summed up in three words – ‘lack of usability’…. straight away, one can tell that this camera was not designed by photographers. In that respect, the total opposite to the Fuji X Series, which I’m pretty sure must have been. The difference is like chalk and cheese. The Sony RX1r is a BALL-ACHE to use…the menu is simply horrible. This is a great shame, as the feature set on this rig is fairly rich – if only you can find a way to locate and actually use them. It gets a little easier as you use the camera more, but to me there is way too much scrolling and sub-menus. It’s just not straightforward, or designed with much common sense.

The AF is OK. Passable in good light, fairly unusable in low light. For a comparison, it’s marginally faster than my X-Pro 1. Once it locks, it’s fine, but sometimes it really takes its sweet time. As mentioned earlier, I’m using hyperfocus scale for much of my street now, so this isn’t that much of a problem. If you rely on AF, it could be. Manual focus is fine in principle, but peaking only comes into effect when used with the focus magnifier setting, which is a distraction to me. In addition, every time the camera goes in to ‘sleep’ setting, the focus distance needs to be reset when switching back on or it’s set to an infinity default setting. It’s focus by wire, but pretty smooth and purposeful.

Auto ISO, a feature I’m just beginning to use, has no minimum shutter speed setting. The Fuji has, and it’s WAY better as the Sony will set it to 1/80 which is way too slow for me. I now use the camera in manual and use good judgement and experience to pre set things before I start shooting to avoid exposure discrepancies. It works, but it isn’t perfect. My settings of choice is: Aperture at anything between F5.6 – F8, Focus at about 1.2m, shutter speed at 250th (and yes, auto ISO up to 6400). These settings are fairly forgiving, and have been giving me consistently good results – even if I do lose some depth of field. 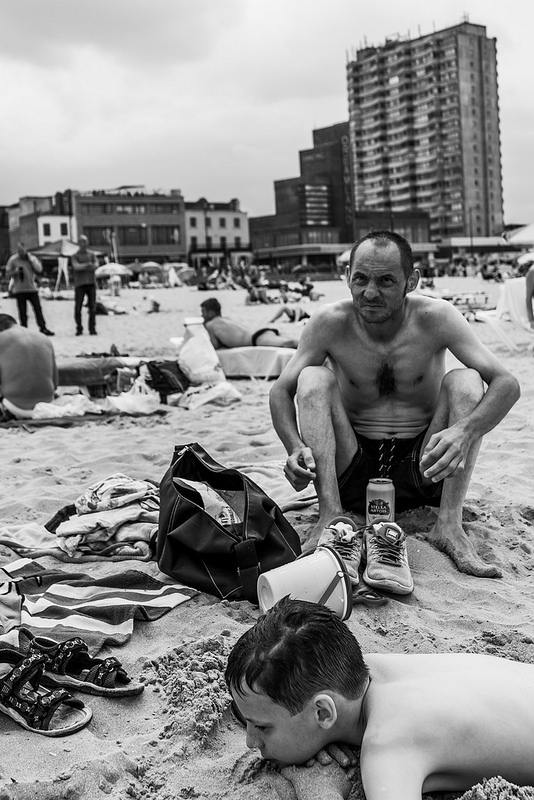 In short, the Fuji X-Pro2 absolutely kills the Sony RX1r in every single department EXCEPT image quality (and a built in flash). This shouldn’t surprise you, as the X-Pro 2 is four years newer, but taking that aside – the Fuji is quicker in all aspects, more intuitive, MUCH more responsive, better UI, better design, MUCH BETTER MENUS and is weather sealed. Burst modes better, dual card slot, 4k video….all there.

Now, of course, the newer RX1r II may well have improved many of these issues but I haven’t tried one so I can’t comment. Do I want the newer model? I sure wouldn’t say no if someone bought me one (who would) but the only real advantage I would gain is in resolution, and 42mp is just too big for street photography, and certainly too big for my patience when it comes to post processing. I have NONE, and my laptop will likely explode under the weight. I bet those menus are the same as well.

So am I keeping the Sony? For sure. Image quality alone demands that I do. And if I can get used to a Fuji X-Pro 1, using the RX1r will be a breeze to shoot, eventually. Am I getting rid of my Fuji X System? Not a chance. It’s still gorgeous, and I appreciate it more than ever now…

…that Zeiss lens, though. 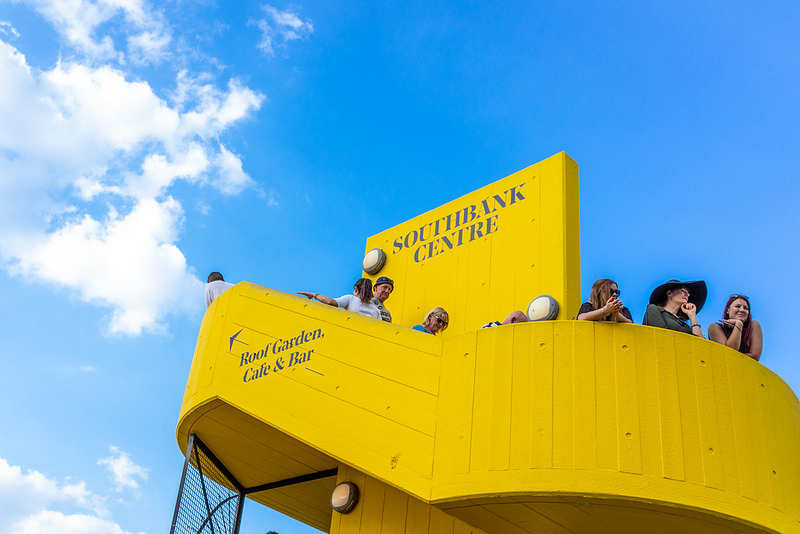