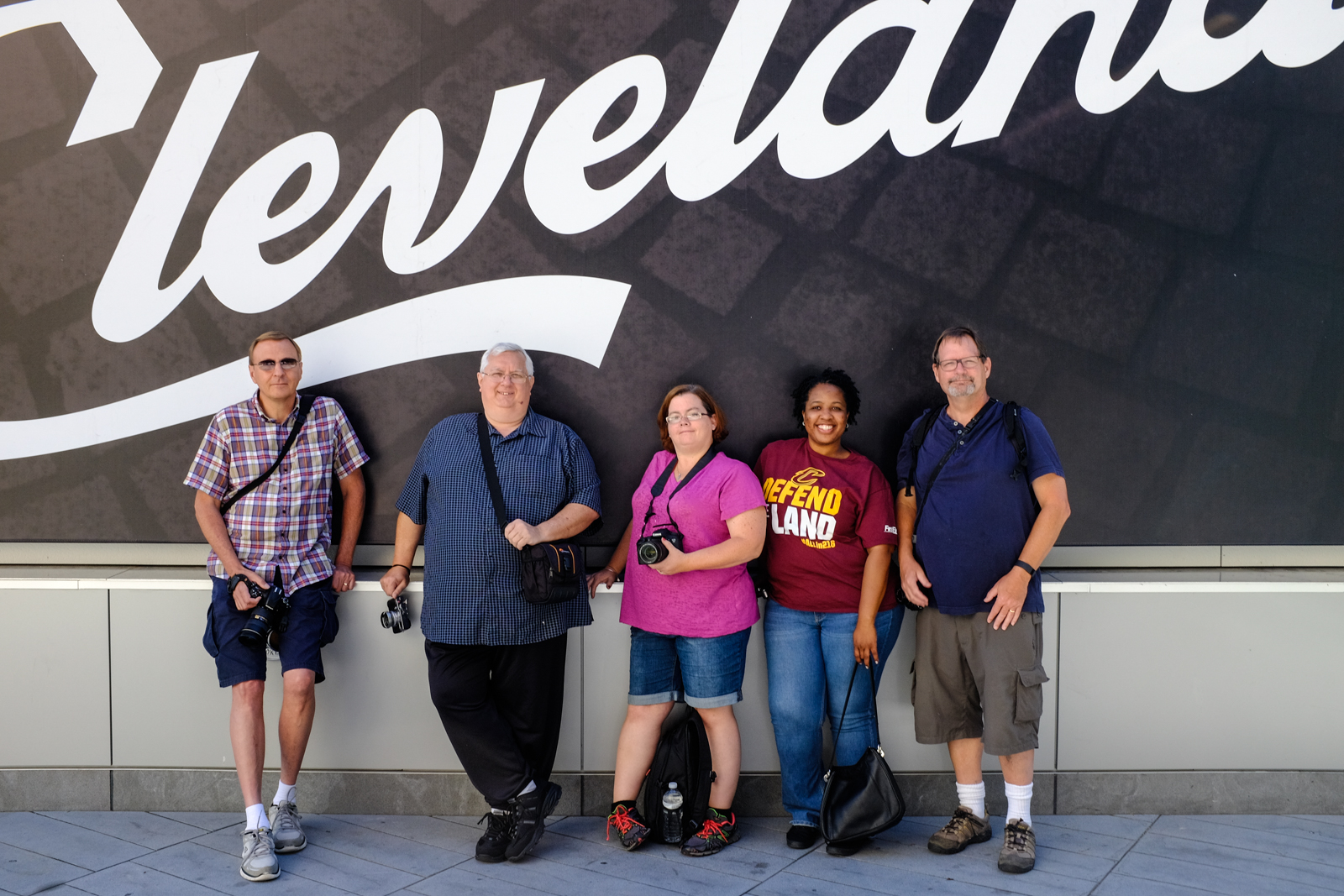 On July 20 Street Photography Magazine sponsored its first-ever photowalk covering the activity on the streets during the Republican National Convention in Cleveland.

While I was confident our group would make several excellent photos for the magazine, I received an unexpected surprise.

While reviewing the photos submitted by the participants I was fascinated at how differently we all approached the same subject when we were there in the same place at the same time. You will see the results here. This is a long article so keep scrolling to see everyone’s images.

Almost 2 years ago the Republican National Committee decided to hold their nominating convention in my town, Cleveland Ohio. This made good sense for them because Ohio is a swing state which often determines the outcome of the presidential election. Although the Cleveland area typically votes Democratic in presidential elections we welcomed the Republican delegates with open arms. The event came on the heels of the Cleveland Cavaliers stunning NBA championship win so the entire city was still on a high. 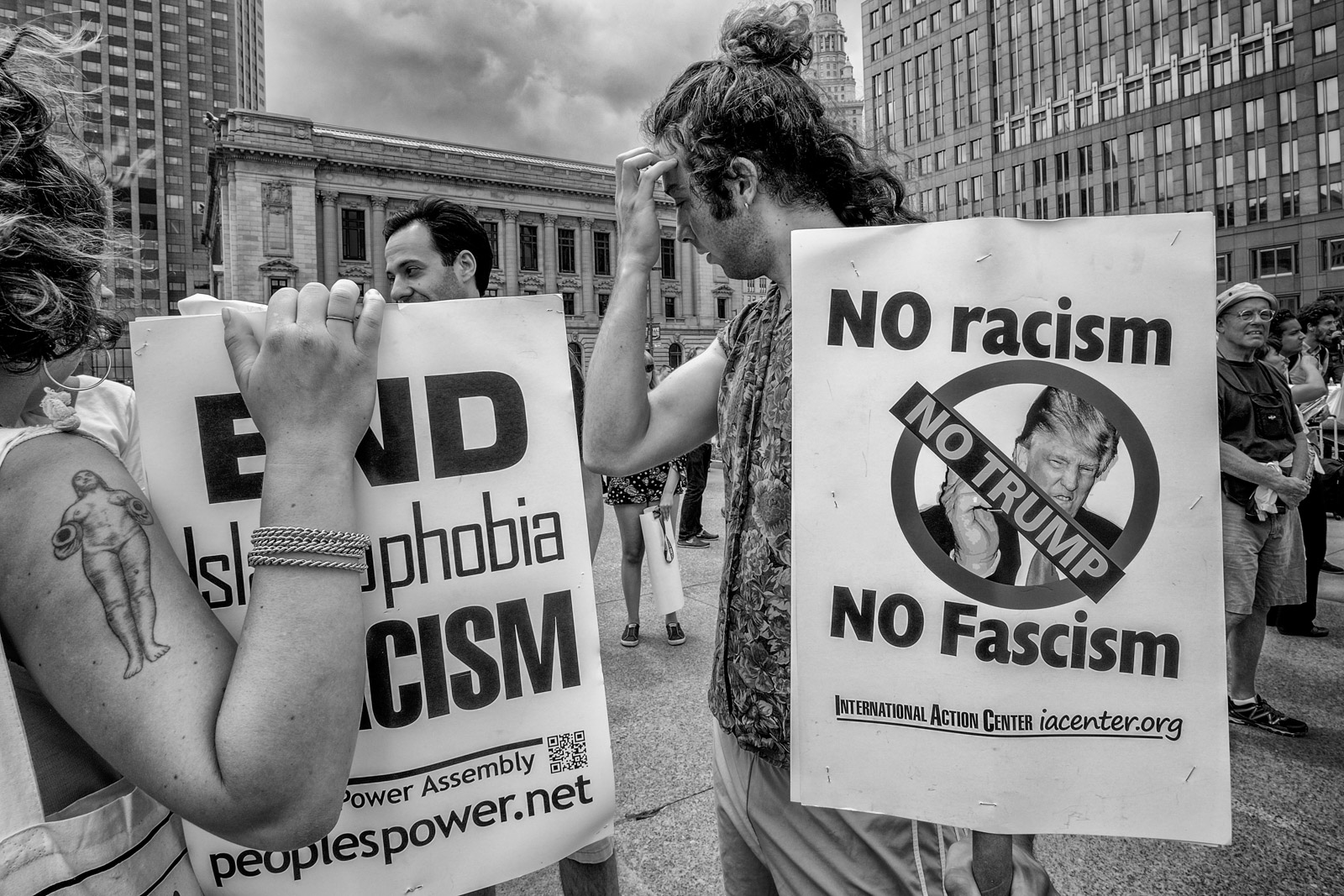 I had been considering a local street photography photowalk in the Cleveland area for quite some time. As the convention drew near I knew this was the perfect opportunity. After a presidential convention in our town is a once-in-a-lifetime opportunity.

Because sponsoring a photowalk was new for us I thought it would be wise to keep the group small. Besides, most hotels within 75 miles were booked solid. This made it very difficult for shooters from out of town.

During the months leading up to the convention we continually heard dire warnings about potential riots and other disturbances. I was concerned for the safety of the group and frankly didn’t know what to expect.

I decided to visit the convention area two days before photowalk just a scout things out. The entire downtown looked like a completely different city. The main convention venues were surrounded by steel security fences as were portions of major streets that connected them. 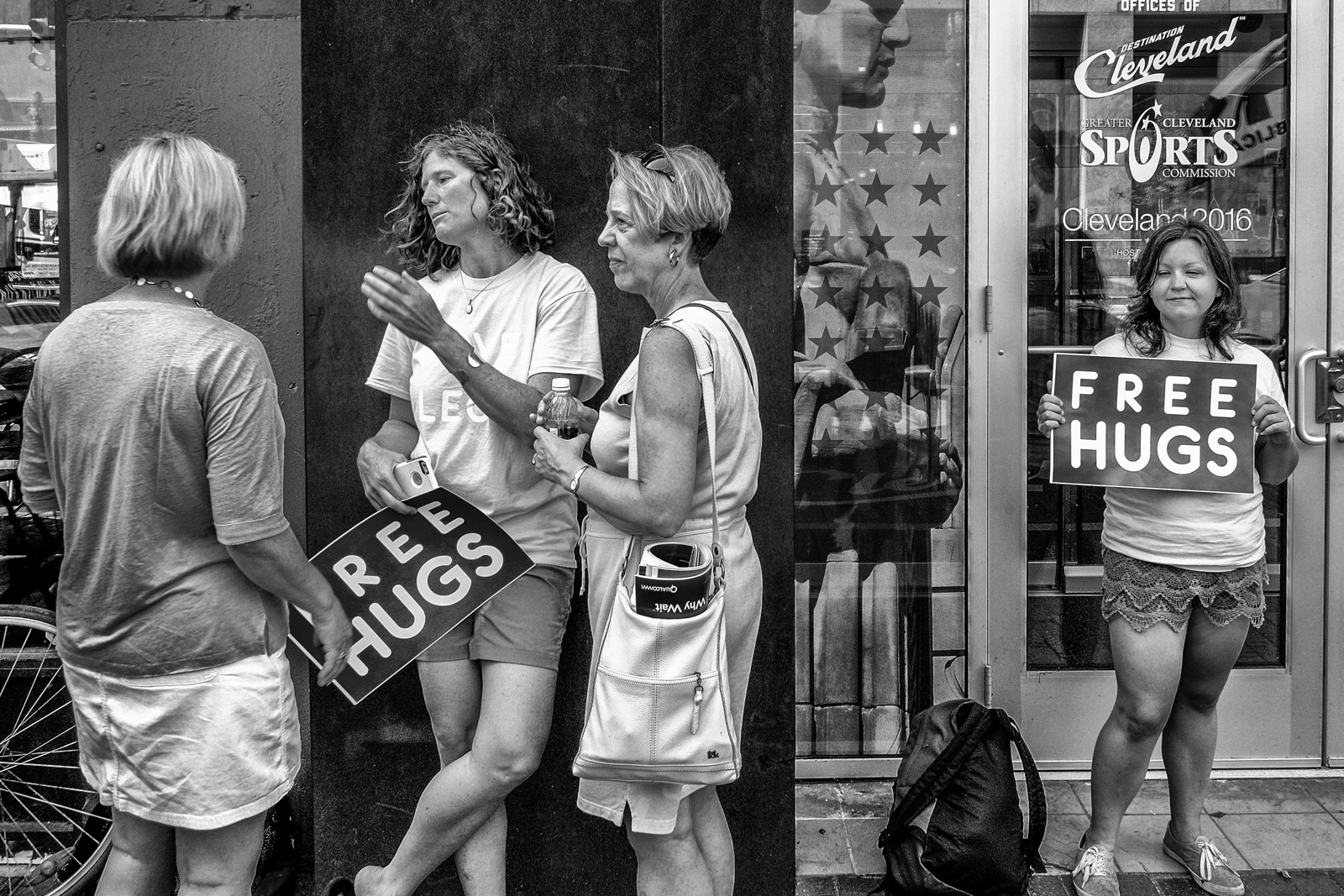 I’m not sure who these people are, but their free hugs were well received by many of the weary and frustrated delegates.
Copyright © 2016 Bob Patterson

Although the entire downtown was prepped for convention most of the foot traffic was confined to a few square blocks near the Quicken Loans Arena and Public Square (he geographical center of the city), a few blocks away. The rest of the city was a ghost town.

Due to security concerns over recent terrorist attacks in Nice, Orlando and Brussels most local residents avoided Downtown Cleveland during the convention. Many office workers were told to work from home during the week so there was actually very little traffic. 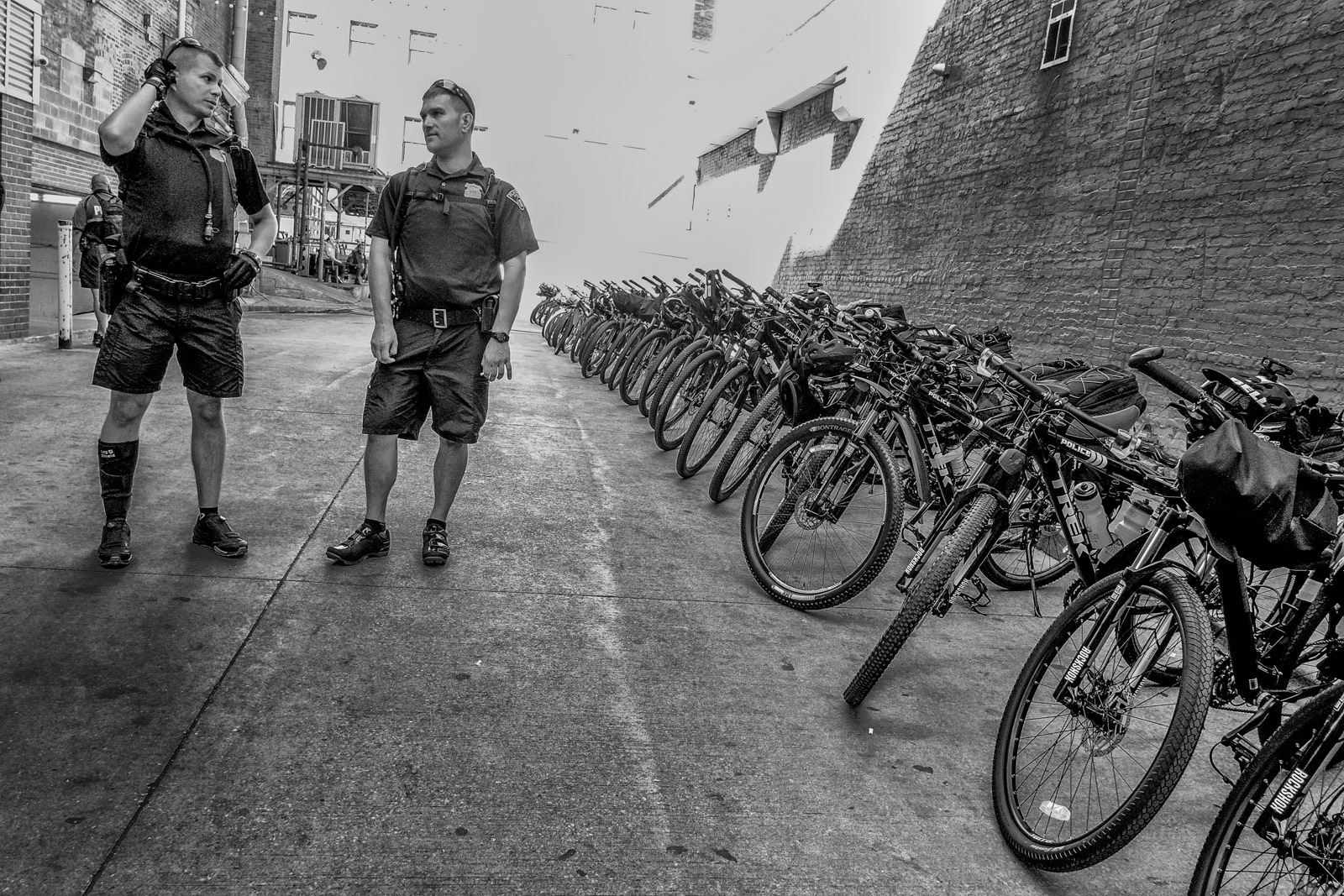 The bicycle squad was a big hit with the crowds (as long as you’re not a troublemaker). They used the bikes setup barriers between opposing protest groups and move about the convention area quickly.
Copyright © 2016 Bob Patterson

There was so much security that Cleveland had to be the safest city in the world that week. Local law enforcement with support from agencies across the country did a spectacular job keeping us safe while maintaining a sense of humor. Don’t get me wrong, they meant business. 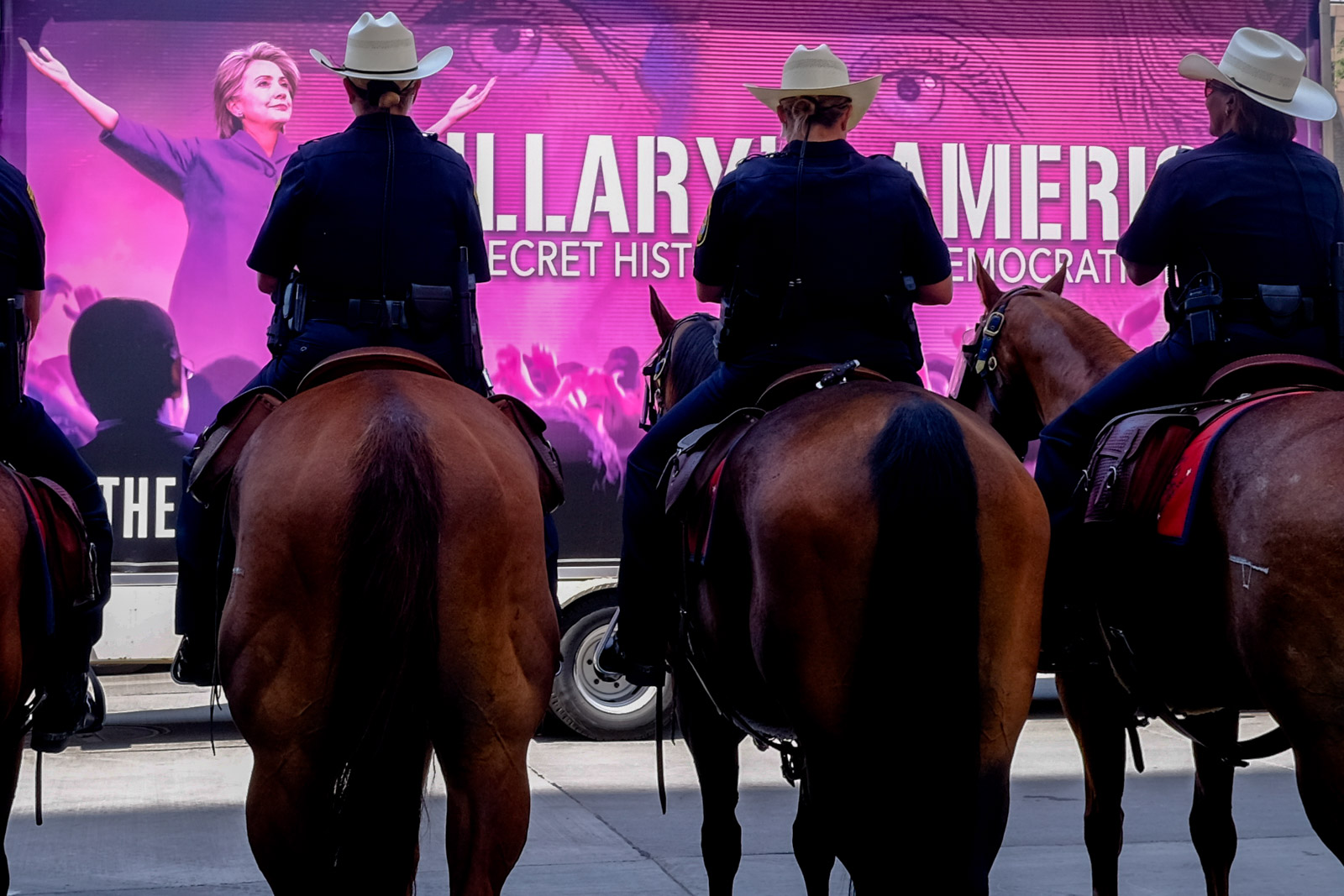 The Fort Worth, Texas mounted police look on as a Hillary Clinton mobile billboard rolls by. That purple color is pretty slimming…maybe she should wear it more often.
Copyright © 2016 Bob Patterson

There were a few sporadic demonstrations but for the most part everyone was well behaved. When there were protests involving opposing groups the police did an excellent job keeping keeping them apart, often using bicycles to form a highly mobile barrier. 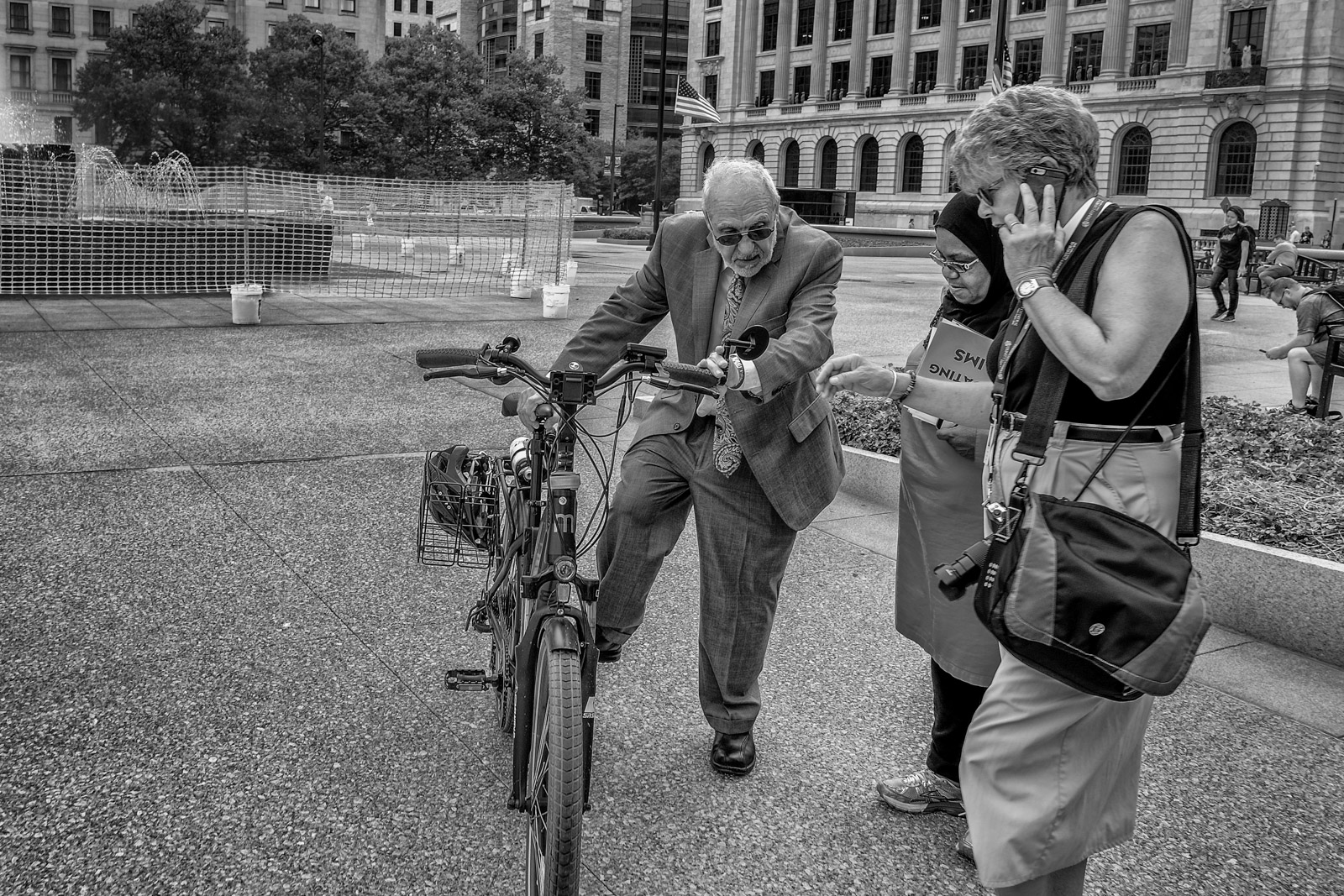 These ladies were preparing for an anti-Trump protest while the gent struggled with a bicycle that belongs to one of them.
Copyright © 2016 Bob Patterson 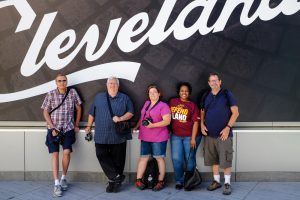 Our group consisted of five people; four participants and yours truly. All but one are from the Cleveland. Randall Roberts, a magazine contributor, made the 5-hour trip from Southwestern Pennsylvania. Needless to say everyone has an interest in street photography. With the exception of Randall and myself the others were new to it. But everyone brought their own set of skills an unique perspective which made for a very special collection of photos for this article.

Most people new to street photography are concerned about shooting strangers in public. After only a few minutes in the streets everyone was very comfortable. In fact we couldn’t have been in a better place to help people face that fear.

First, there were hundreds of photographers on the streets that week. It seemed that they were more photographers than protesters. Everyone was either photographing and being photographed. In fact most people on the streets wanted their picture taken. If you have similar concerns then break the ice by shooting in and around big events, like street fairs or busy tourist spots. 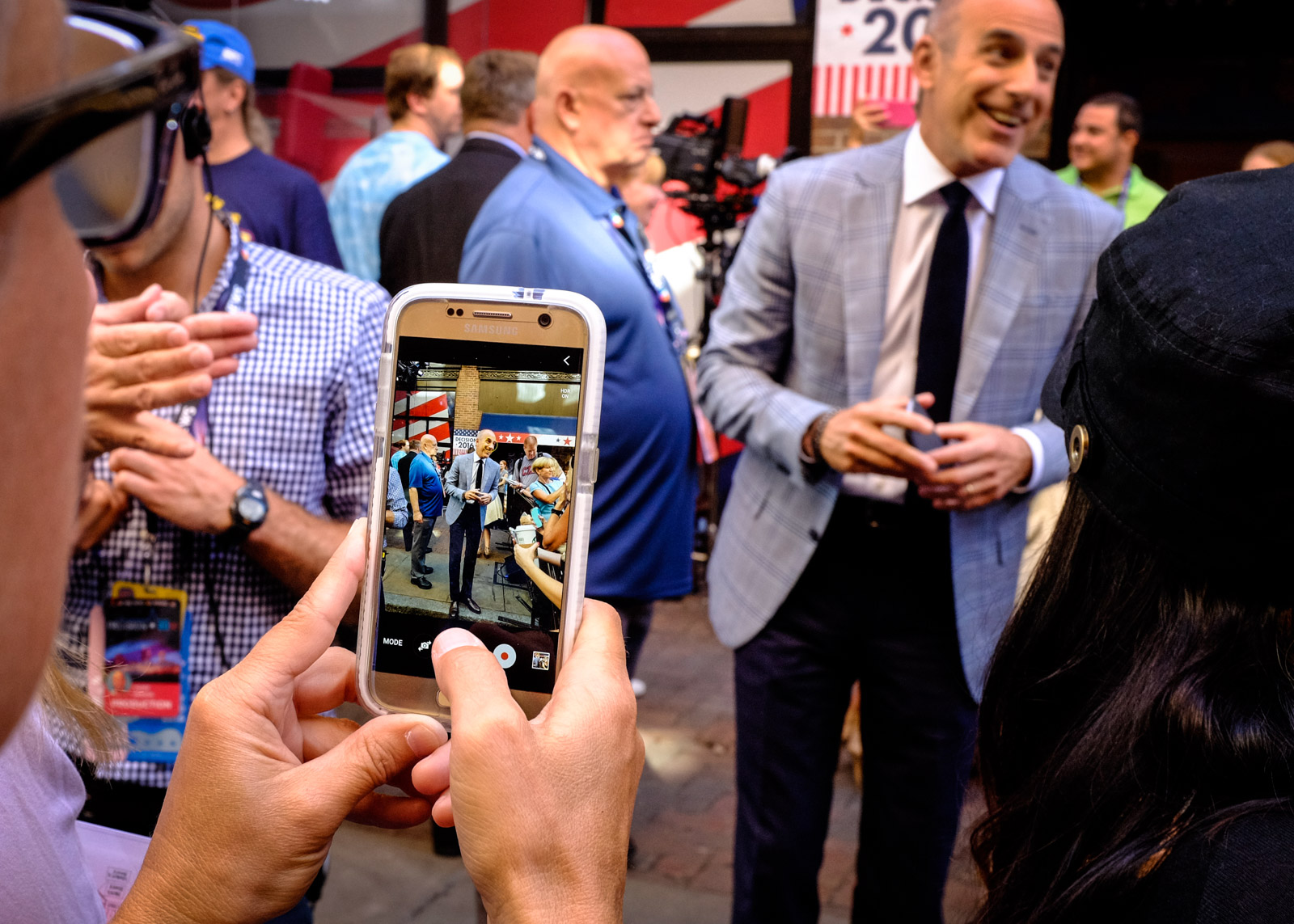 The convention and protests were the key stories for the press photographers. For our group, the media was a big par of the story. Here, Today show host, Matt Lauer, works the crowd after the show while an onlooker shoots a photo with his smartphone.
Copyright © 2016 Bob Patterson

Initially I planned to challenge the photowalkers to stick with one camera and lens throughout the entire day. But after spending several hours surrounded by photojournalists with multiple bodies and zoom lenses I realized many photographers would want more flexibility. I put that idea aside for another time.

While I typically work with one body and a prime lens, two of the participants shot with zoom lenses. As a result they came with a way with a completely different look and feel which added to the variety of the photos in the project. 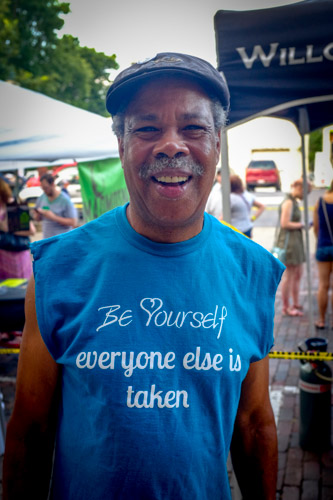 While watching the others work in their own way with the gear they’re most comfortable with, I realized how important it is to to be yourself; to photograph from your own perspective and not to listen to anybody who tells you what street photography is and isn’t. It’s a very personal endeavor. 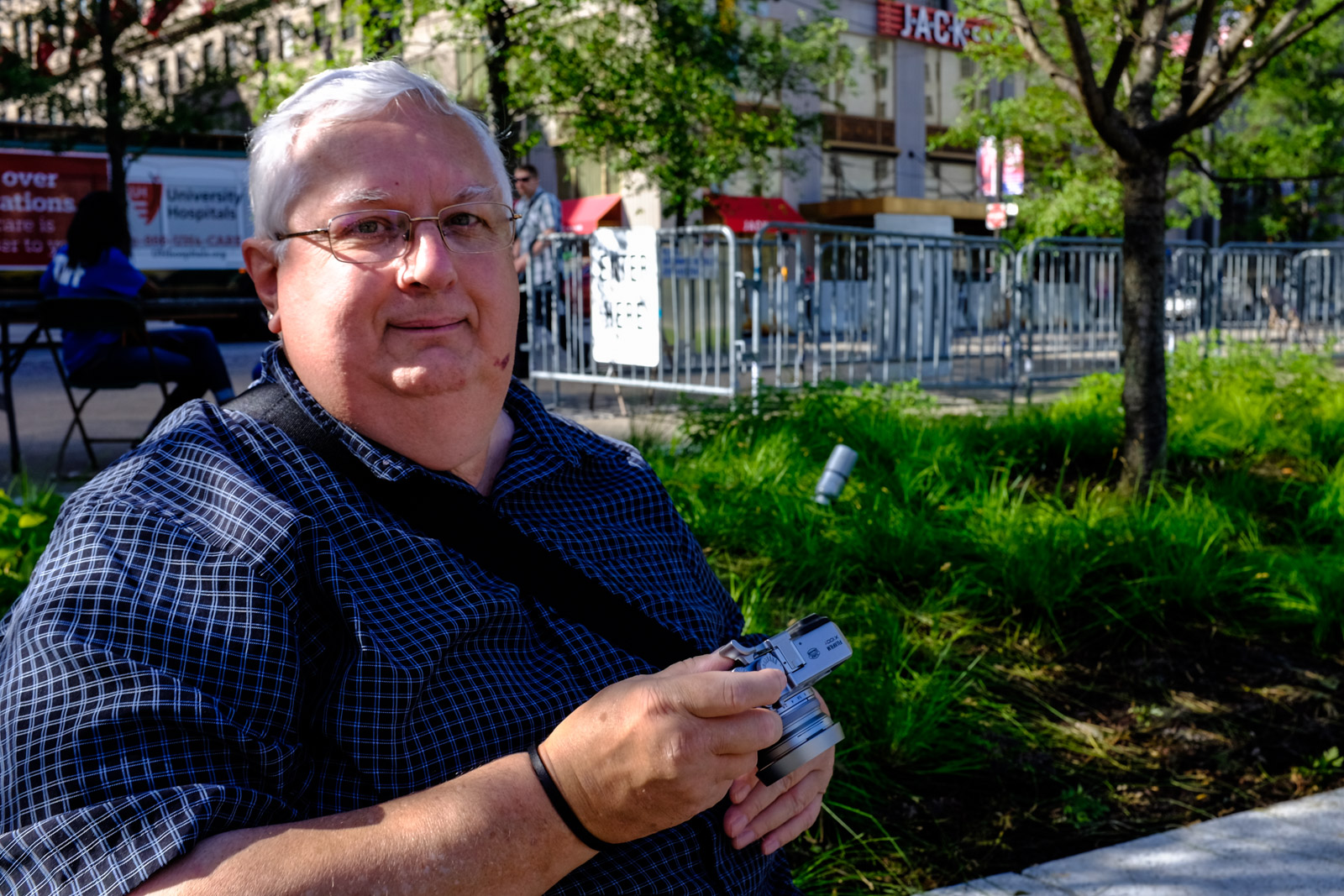 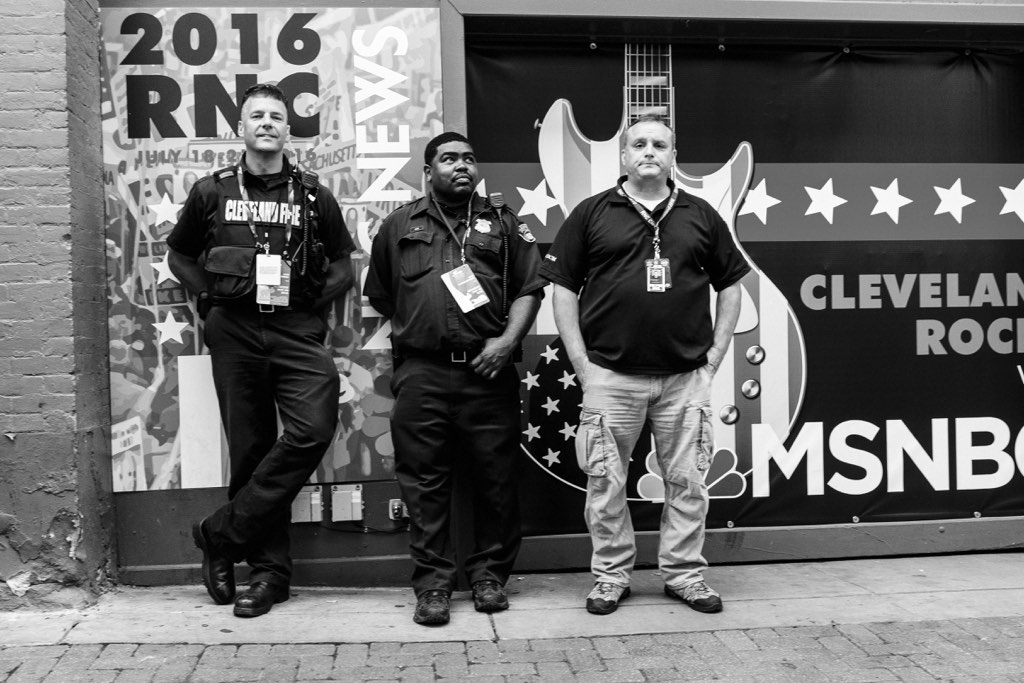 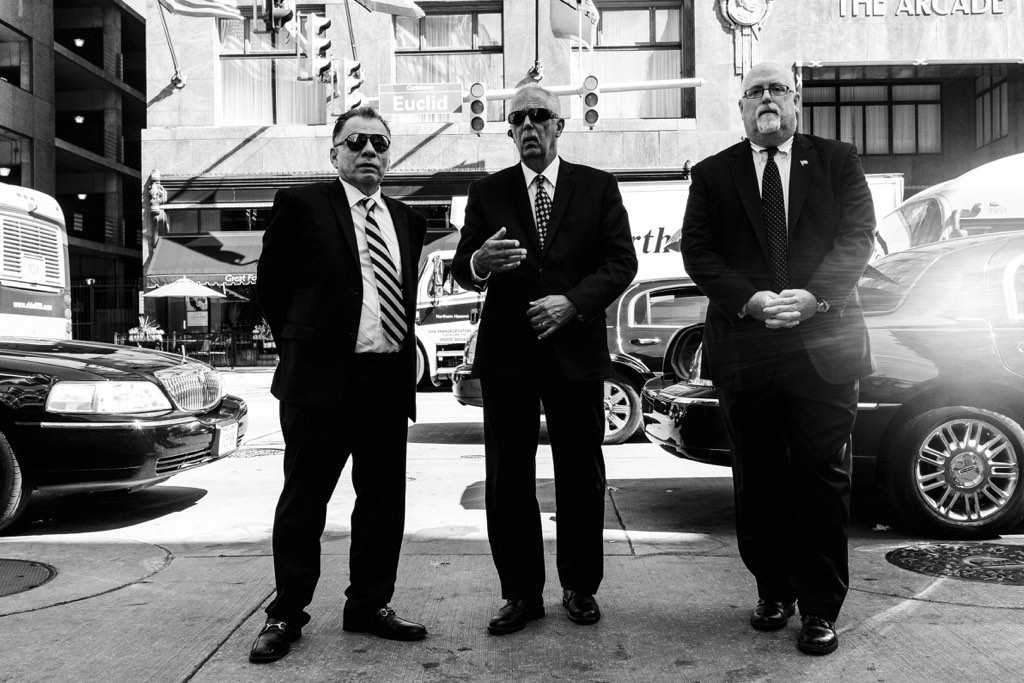 Three chauffeurs patiently waiting for their passengers for the day.
Discussing and giving each other their views on everything and anything
Given enough time I’m convinced these three could have solved all Americas problems
Unfortunately for us all to soon their passengers showed up and the three sped of on separate journeys
Copyright © 2016 Randall Roberts 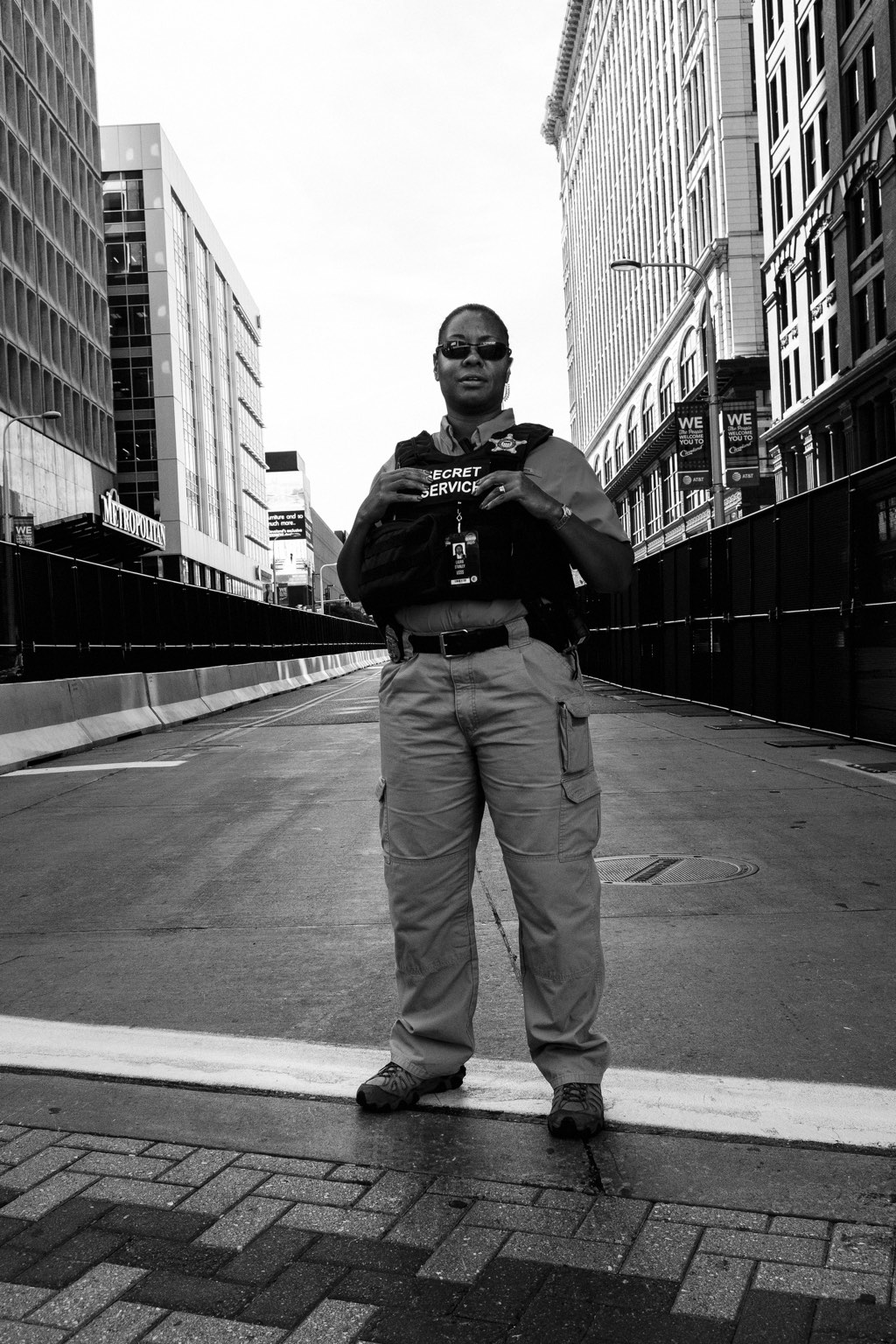 Secret Service agent guarding a road. After I took her photo she joked with me, “Do I look fierce?”
I assured her she was very intimidating
Copyright © 2016 Randall Roberts 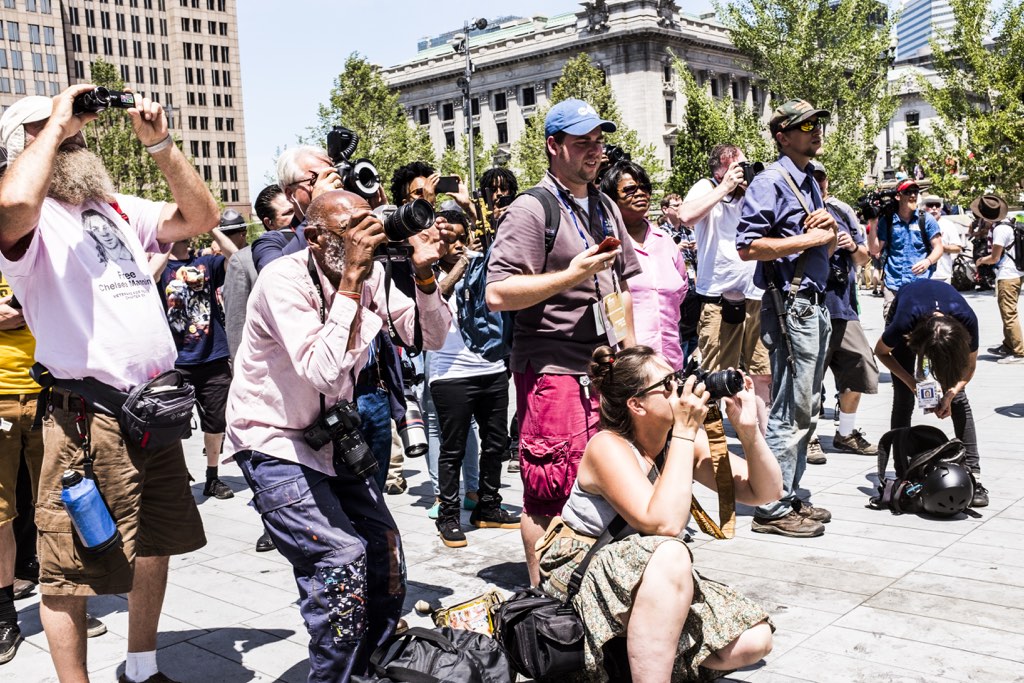 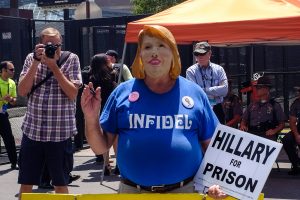 That’s Stan on the left in action shooting his subject from behind. 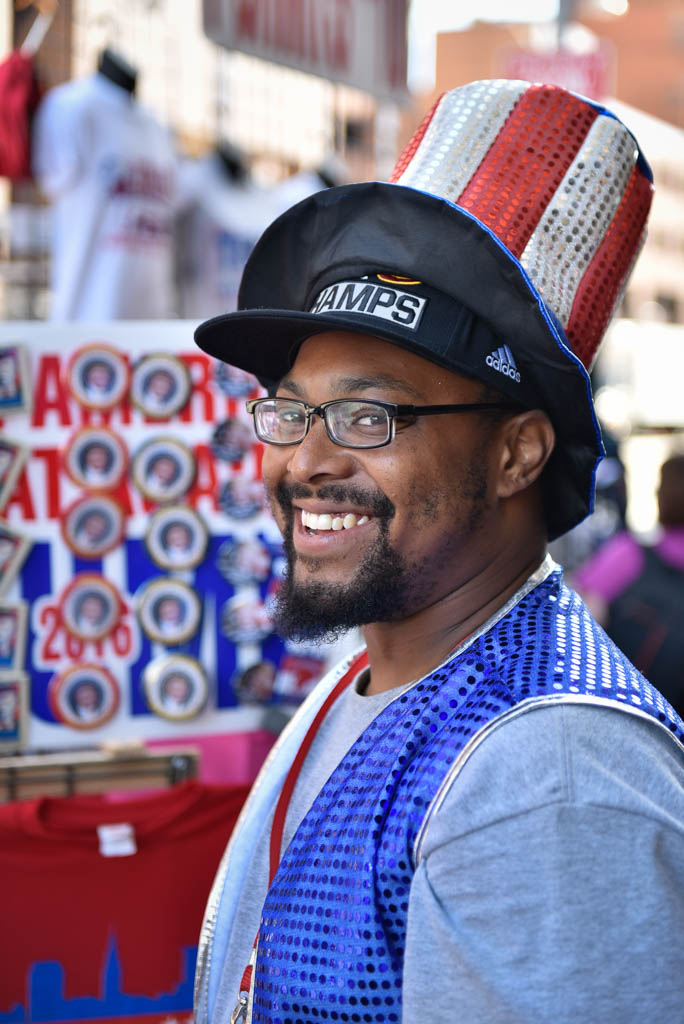 I told this street vendor I liked his hat, and asked if I could take his picture. His response was better than I hoped for!
Copyright © 2016 Stan Lindholm 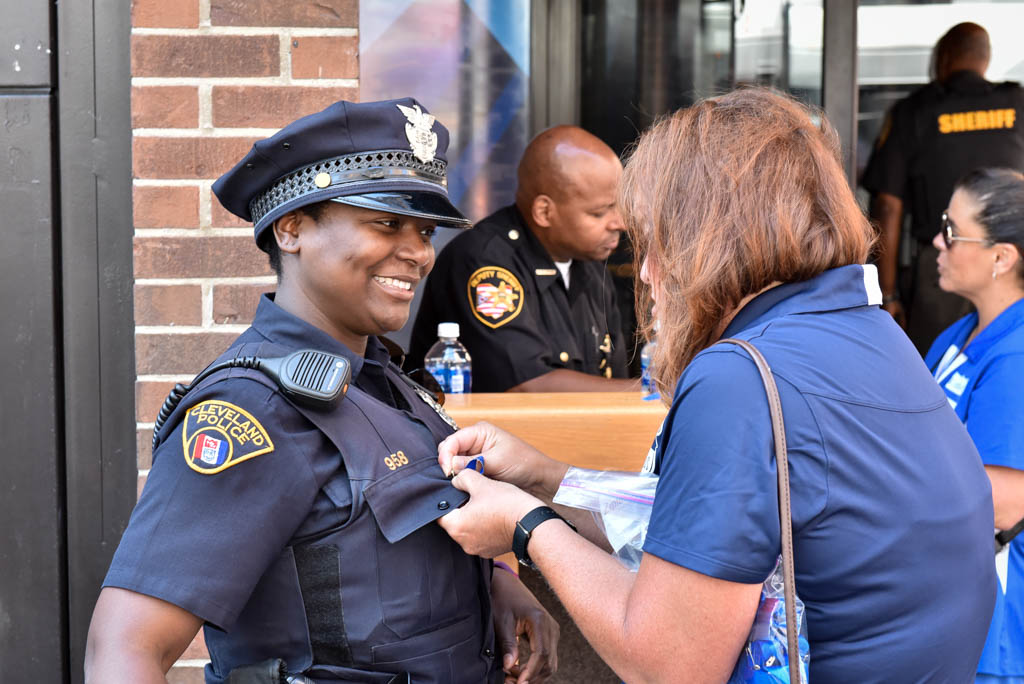 I wish I had stopped to ask what was being pinned on this officer, though it seems to be some sort of token of appreciation from this citizen. It obviously pleased her quite a bit! I Great to see police being treated so well at the convention!
Copyright © 2016 Stan Lindholm 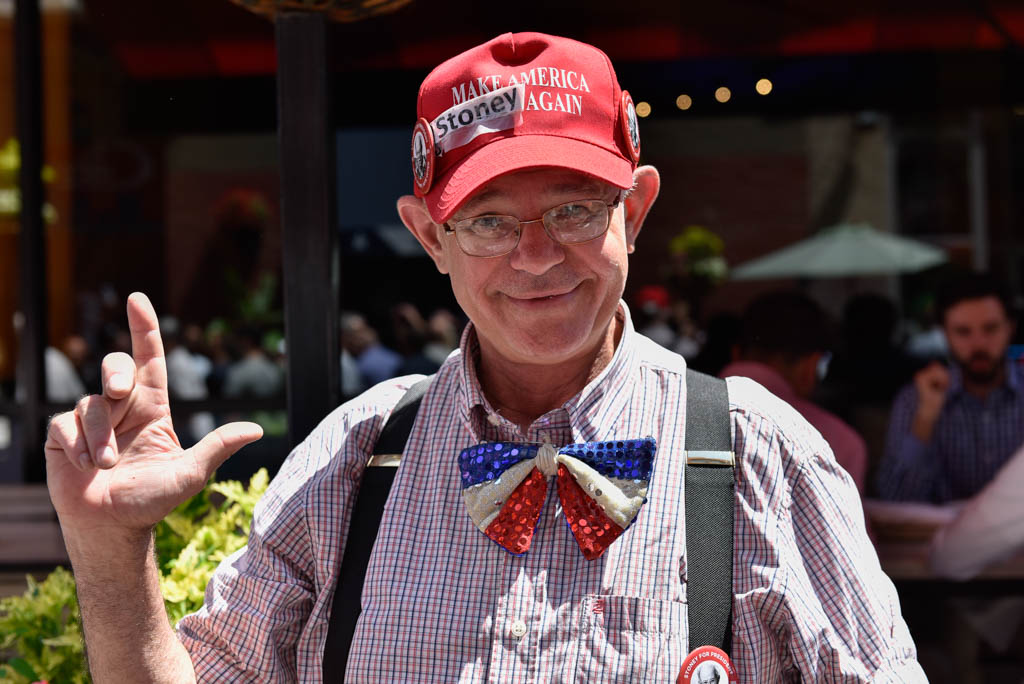 I may end up voting for Mr. Stoney. He seems vastly friendlier than the two leading candidates, and I love his bow tie!
Copyright © 2016 Stan Lindholm 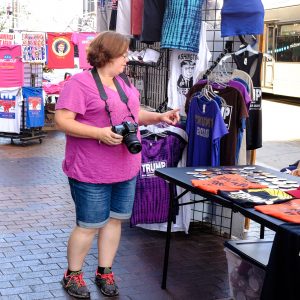 Karri looking for her next subject 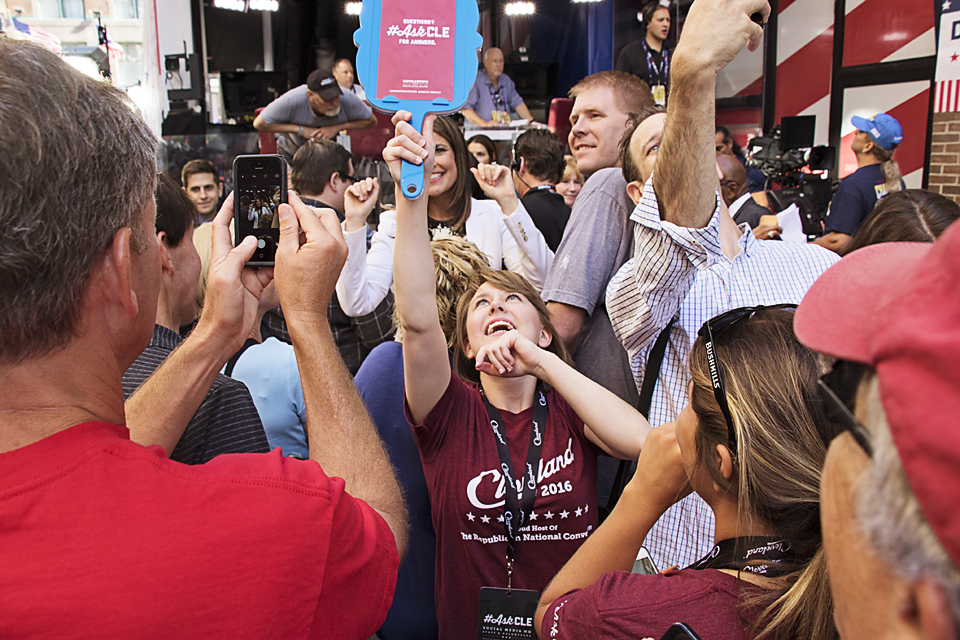 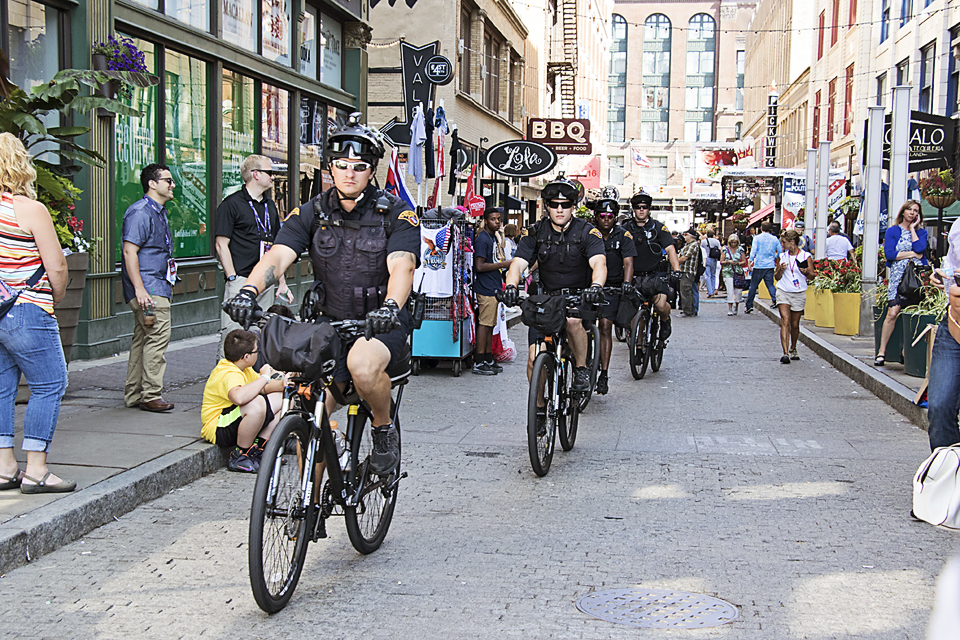 Dozens of police on bicycles patrol the streets to keep them safe.
Copyright © 2016 Karri Wirth 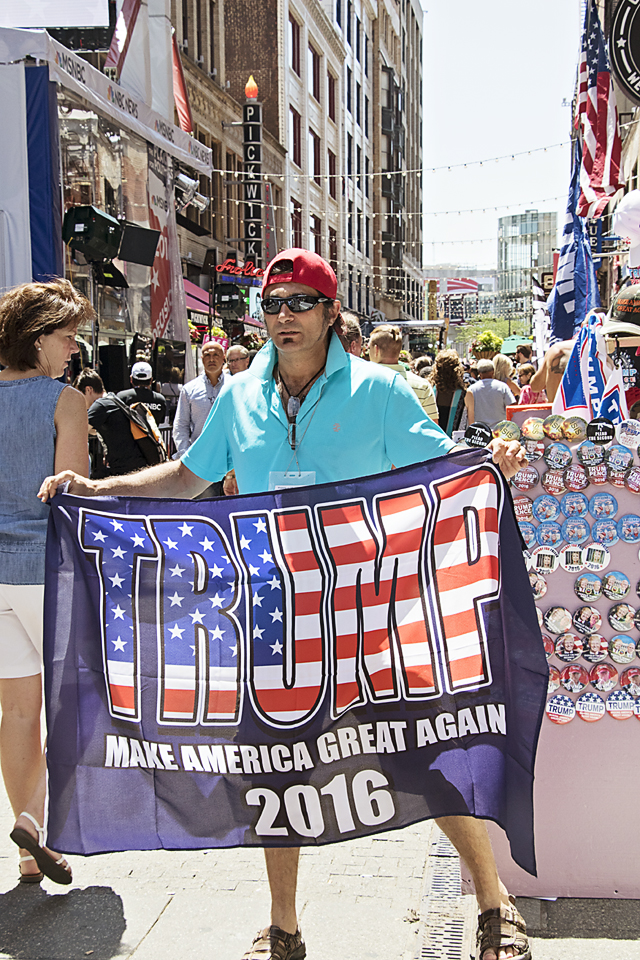 Vendors at the RNC working the crowd to sell their goods.
Copyright © 2016 Karri Wirth 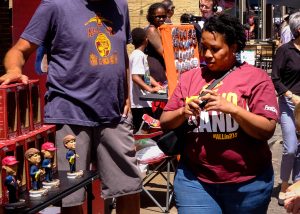 Meslissa caught up in the moment.

Melissa is a new photographer and decide to give street photography a try when she saw our Eventbrite post about the photowalk.

I stuck around after the group left and ended up witnessing the group that was burning the flag. After a good bit of yelling, the police began pushing out the crowd. At one point, they used the horses to move the crowd back further.
Copyright © 2016 Melissa Hughes 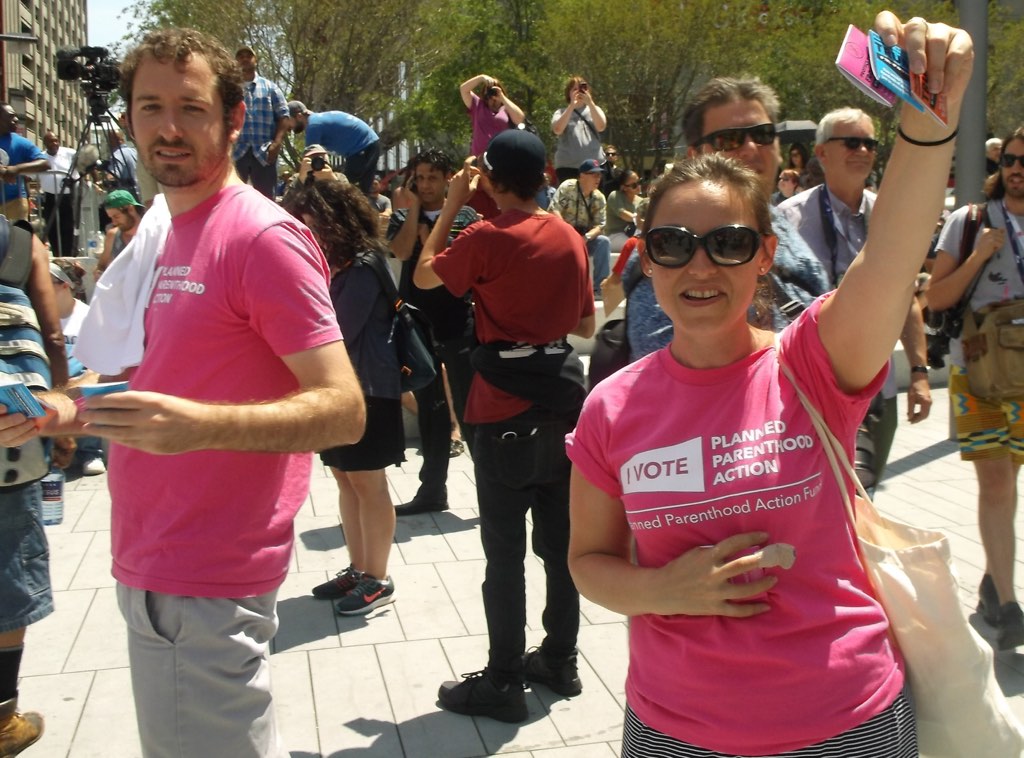 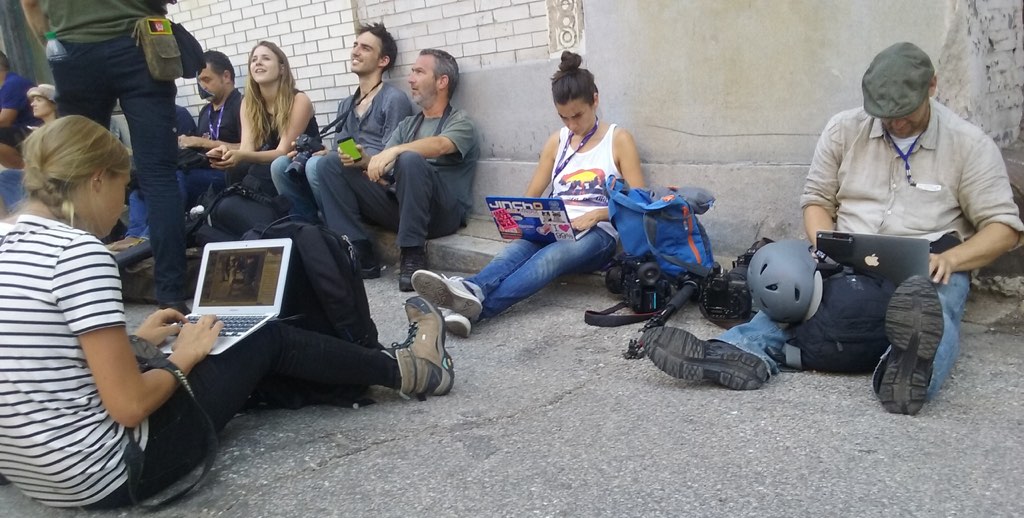 The outside view of the flag burning protester. Everyone just put their camera in the air hoping to get a glimpse of whatever was happening.
Copyright © 2016 Melissa Hughes