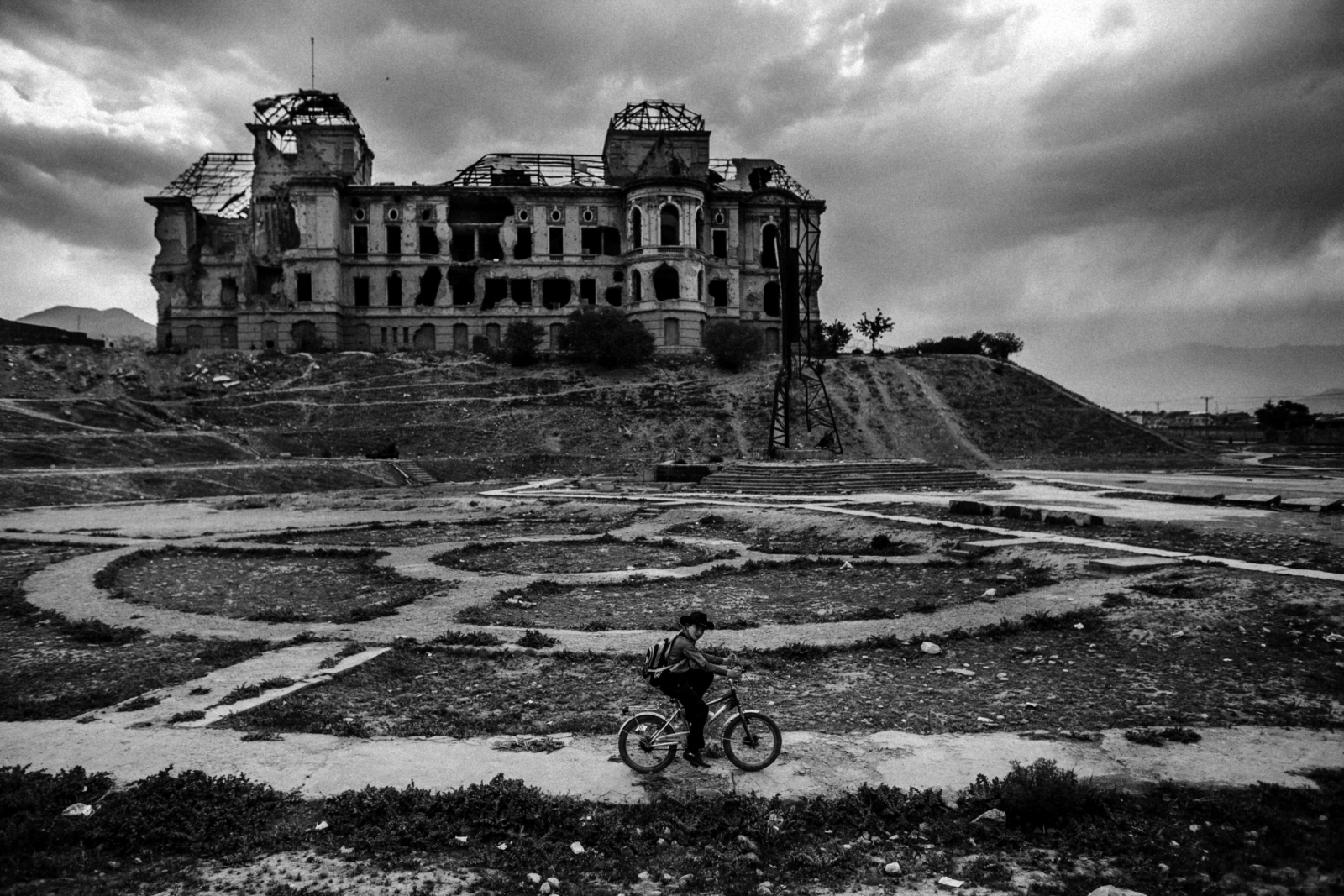 Photographers Timothy Allen and Majid Saeedi have very different backgrounds, but when it comes to street and documentary photography, both men pay heed to several important considerations in their craft that are excellent reminders for anyone who loves to capture culture and the human condition: Light is king, less is more & lose the long lens.

Both Allen and Saeedi will be featured with special exhibitions at the upcoming Siena International Photography Awards and Festival in Siena, Italy Oct. 29-November 30, 2016.

I spoke with Allen via Skype as I began my day on the West Coast of the United States and he was wrapping up his afternoon on his remote farm in Wales. 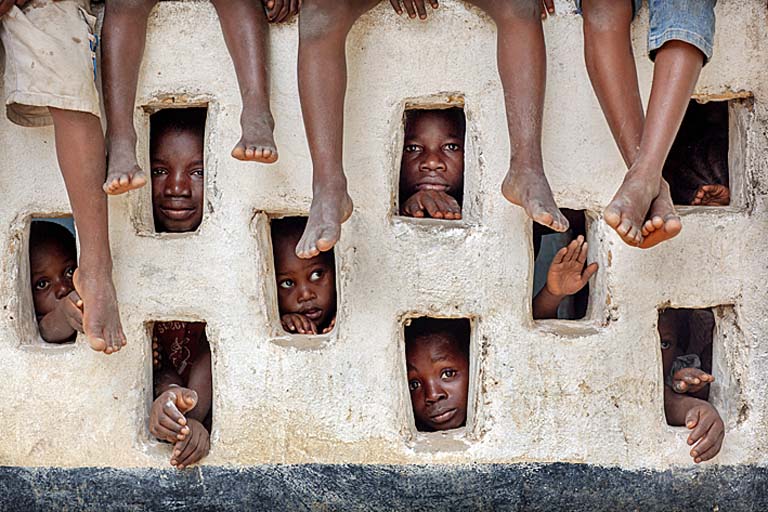 Although he rarely photographs in urban settings, Allen is an expert when it comes to human culture and interaction. For two years, he shot 90 % of the landmark BBC series, Human Planet. The show took him to some of the most remote corners of the world, places he now continues to seek out on his own. 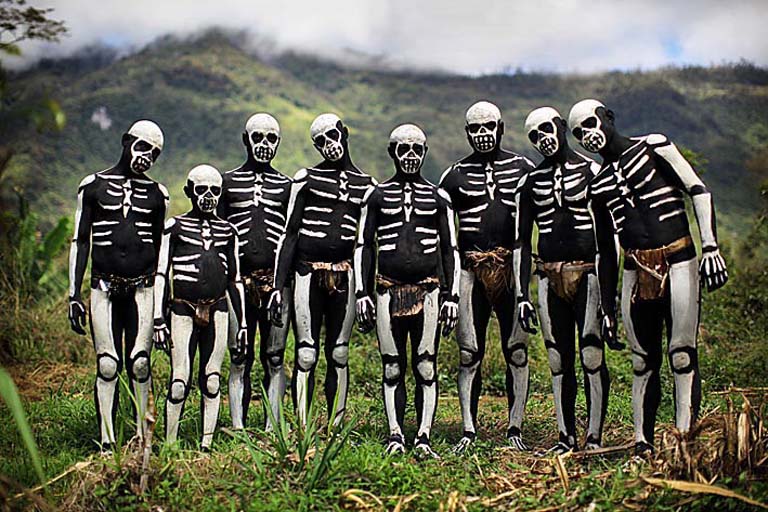 Allen’s passion for photography was launched when he left the UK at age 22 after earning a zoology degree and spent three years traveling through Indonesia as part of an ecological research group. He later began a working towards a degree in photography and joined an aid convoy to Bosnia, shooting photographs for his first year reportage project. Allen then landed photography positions with the Sunday Telegraph, many British broadsheet commissions and a six-year position at The Independent. He also joined the Axiom Photographic Agency in 2002, work that led him further around the globe. In 2009, he began working for Human Planet.
In recent years Allen is spending less time as a traditional photographer and more time authoring books, leading photography expeditions to Mongolia and making films. Although he said he originally left still photography “kicking and screaming,” he is happy to have adapted with the times in a world that’s changing rapidly for professional photographers. 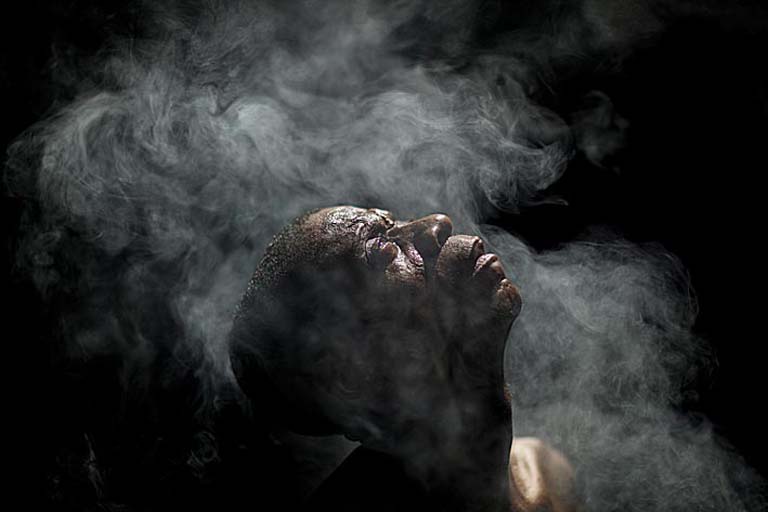 In fact, when we spoke, he said he would be leaving soon to live with the Ninet people, also known as Samoyeds, an indigenous people in northern Arctic Russia. This expedition is purely personal, he said. He wants to know the people, learn from them. And, he said, his photography and filmmaking is always less about documentation and more about being immersed in culture. He likes to know the people he is photographing. 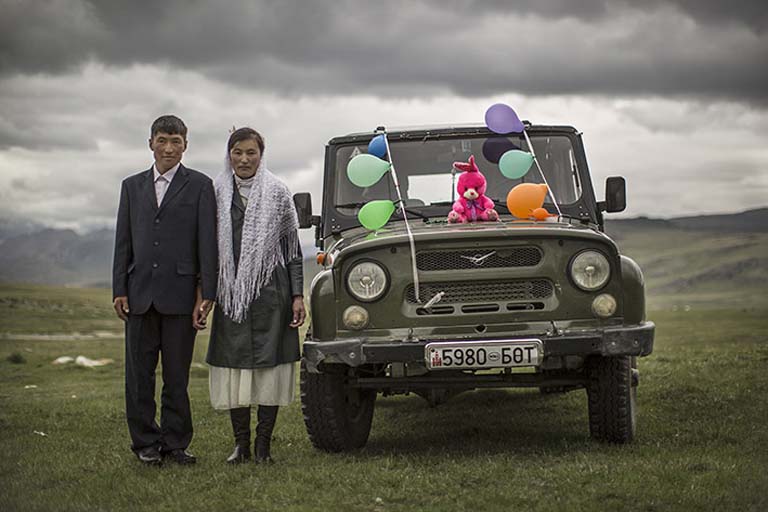 “I don’t want images of strangers,” he said.

When asked if he has a favorite location after years of travel to the far reaches, he said, “My favorite place is the one I haven’t been to yet.”

Allen’s show at the Intronati Library in Siena is titled “End of the Road” and will feature images he shot in the farthest reaches of the globe.

Like Allen, Iranian-born photographer Majid Saeedi, who has covered the Afghanistan conflict for more than a decade and began going to the front lines with his camera at age 18, is also deeply interested in understanding the people in front of his lens. He said acceptance is key, especially with street photography.

“The success of a street photographer depends on being accepted by people,” Saeedi said via email.

“It depends on your behavior, how you talk and act with people around you and how you look at them through your lens.” 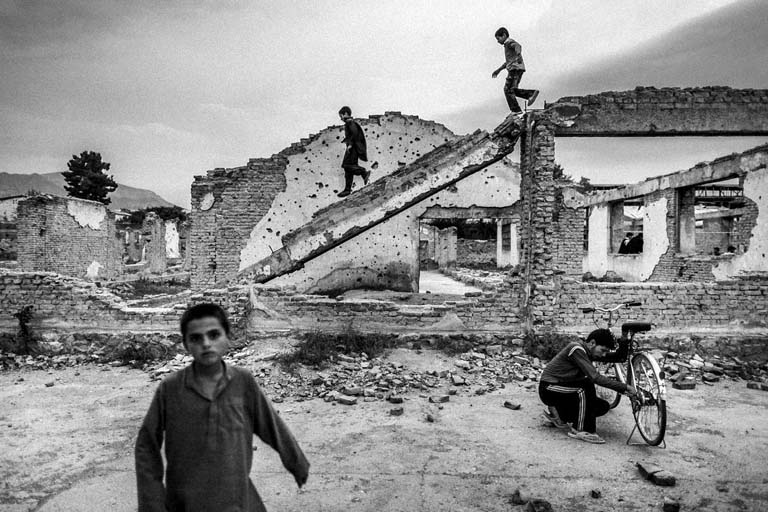 Although he was named Photographer of the Year in Iran eight times, Saeedi was working for Getty Images when he was arrested in Tehran in 2009 for photographing and transmitting news images. He was released after a month in jail and went to live in Afghanistan. A stunning and heartbreaking collection of his images titled, Life in War, made during his years in exile covering the conflict, won the 2014 FotoEvidence Book Award. 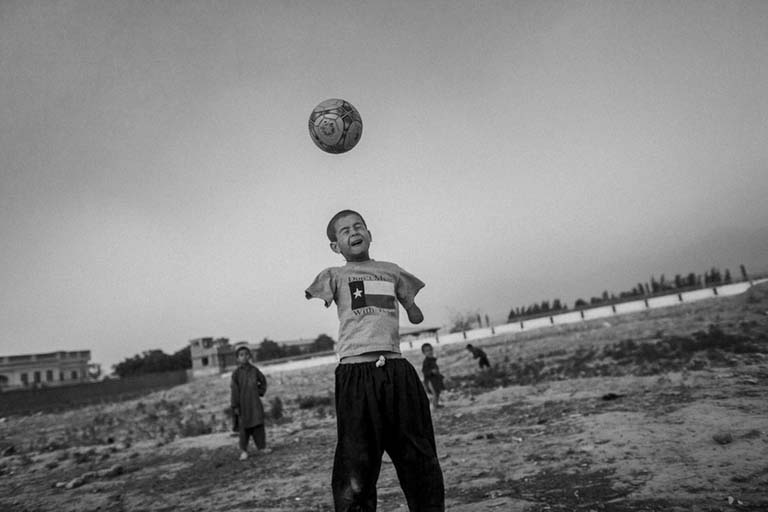 He said he believes the work is important because through street photography he is able to share with the world “what others don’t see and might not give importance to, such as portraying citizens’ everyday lives.”

Saeedi said his many years in war zones has transformed him in a variety of ways, especially in the way he views time itself and his own place in the world.

“Time can build or ruin a person,” he said. “I prefer to use the time well. My time photographing conflict has permitted me to build myself and not become selfish, to discover myself. The questions I ask repeatedly of myself are, ‘Who am I? Where am I? Why am I here?’ What you see in my photographs is me.” 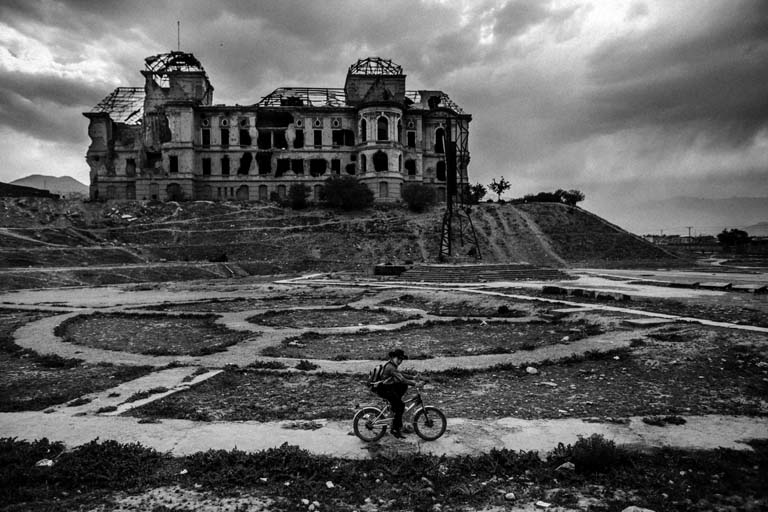 Currently, Saeedi is collaborating with Unicef and enjoys mentoring and teaching photography to young people. He said he would love to one day work for National Geographic, an organization he applauds its innovation and inclusion of new generations of creatives.

Saeedi’s exhibition in Siena is titled, “Afghanistan, a Land of Continuous Conflicts” and will be hosted in the Stellino’s Former Distillery, Via Fiorentina, 95.

Advice from the Pro’s 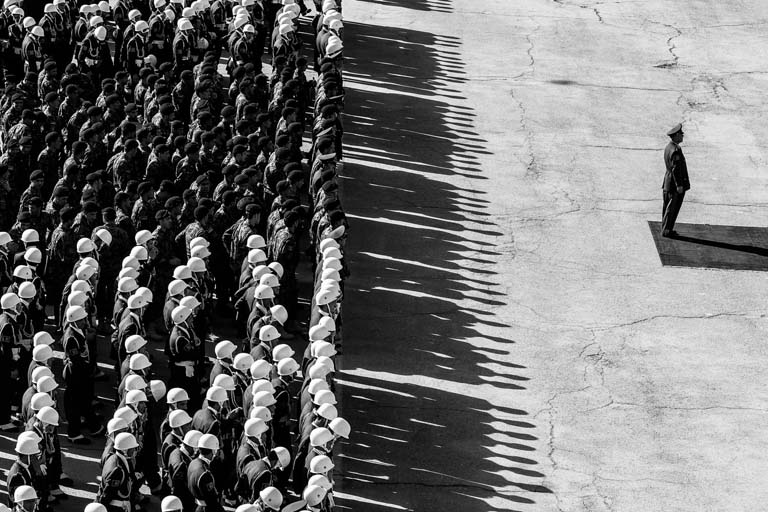 Refusing to chase the perfect light of blue mornings and golden evenings only causes your photography to hit a wall, Allen said.

In an excellent blog post on taking better travel photos he writes that the wall can’t be overcome “unless you start venturing into more delicate lighting situations.

“IMO one amazing image shot in fantastic light is worth a hundred OK frames shot in the harsh light of a sunny day….In my experience, you can always find a way to make at least one shot in great light, no matter what the situation.” 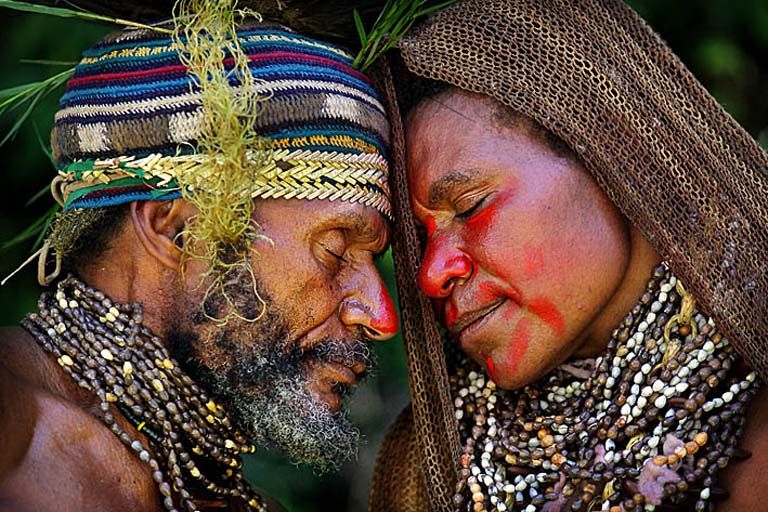 “Street photography is like painting, sculpting and other fine arts. It is an art,” said Saeedi. “A good photograph doesn’t come about suddenly. The first thing I do when I arrive in a new place is to not shoot for a while. I could be in Kabul for an entire month and shoot only one photograph in the street. My goal is fewer images, but one good one. An artist is not a machine for producing great images.”

Allen offers similar advice. When he leads expeditions, he said people tend to begin a trip taking thousands of photos the first day, then fewer and fewer as time goes by.
“By the end they are picking their moments,” Allen said. “You learn to be strategic, sharp and sweet with the photography – and easygoing with the people.” 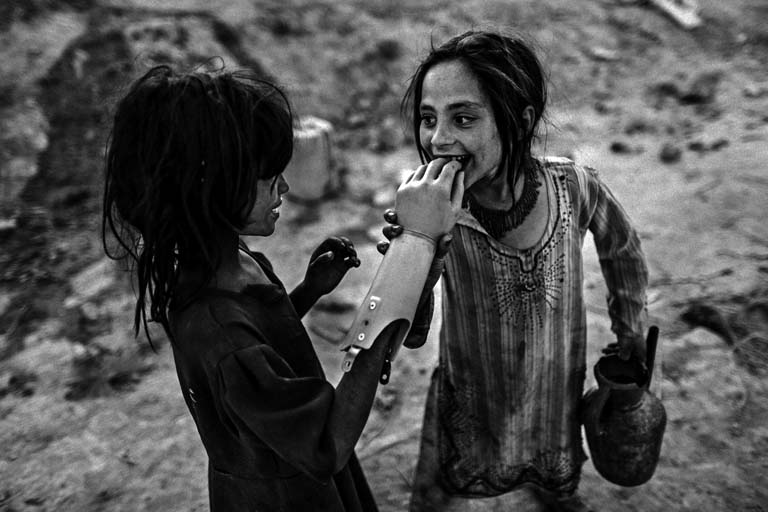 “Face your fear,” Allen said, when it comes to shooting people. In a blog post on the topic, he puts it even more bluntly: “Lose the addiction to your beloved long lens.”

The fear of getting up close and personal with our own species is a common one, he added, the most common in fact.

“This is a big issue with travel photography of humans and in street photography,” he said. “I’ve never actually conquered my fear of approaching new people….but I do it anyway. Learn to deal with it. It’s hard for people to believe, but I’ve been shy my whole life.”

On expeditions with paying clients in Mongolia, for example, Allen said he spends a lot of time helping “students” learn how to be comfortable in a new culture, how to slow the pace and plan shots.

The fear of dropping the big lens, especially in travel photography, Allen said, is a “lesson in human psychology.”

“I like to show clients what’s possible, that it’s possible to be comfortable.”

Saeedi doesn’t use a long lens, but does like to blend in on the street. He said he used a compact camera for a while, but now prefers to shoot street shots with his mobile phone.

“Before shooting, I prefer to look, listen and pause,” he said. “I think and look again and only then look through my camera. It is only for a moment or two that I am not like everyone else, looking through a lens. Then I am like all the other people around me and I continue on my way.”

The Tuscan city of Siena, Italy will become a “window on the world” this fall with more than 45,000 images from 127 countries on display throughout the city from October 29-November 30.

A Festival kickoff and awards ceremony will be held on Oct. 29. “Beyond the Lens,” an exhibition of award-winning photographs, will be on display through November at Palazzo Pubblico’s Magazinni del Sale.

In addition, eight internationally known photographers such as Timothy Allen and Majid Saeedi will have their work displayed in special exhibitions.

“We are proud to present to the world a second edition of a grown, mixed and full events Siena Art Photo Travel,” said Luca Venturi, Festival founder and art director.

“In two years’ time we created an important event, which oversteps Siena’s borders and brings to Italy hundreds of people with the common love for this magnificent art, photography and for beauty in any form.”

The Festival will also offer photography lovers and professionals the opportunity to take part in many unique workshops, photos tours conferences and other events.
For the full awards and Festival schedule and more information, visit the following links: