My Adventure with Film 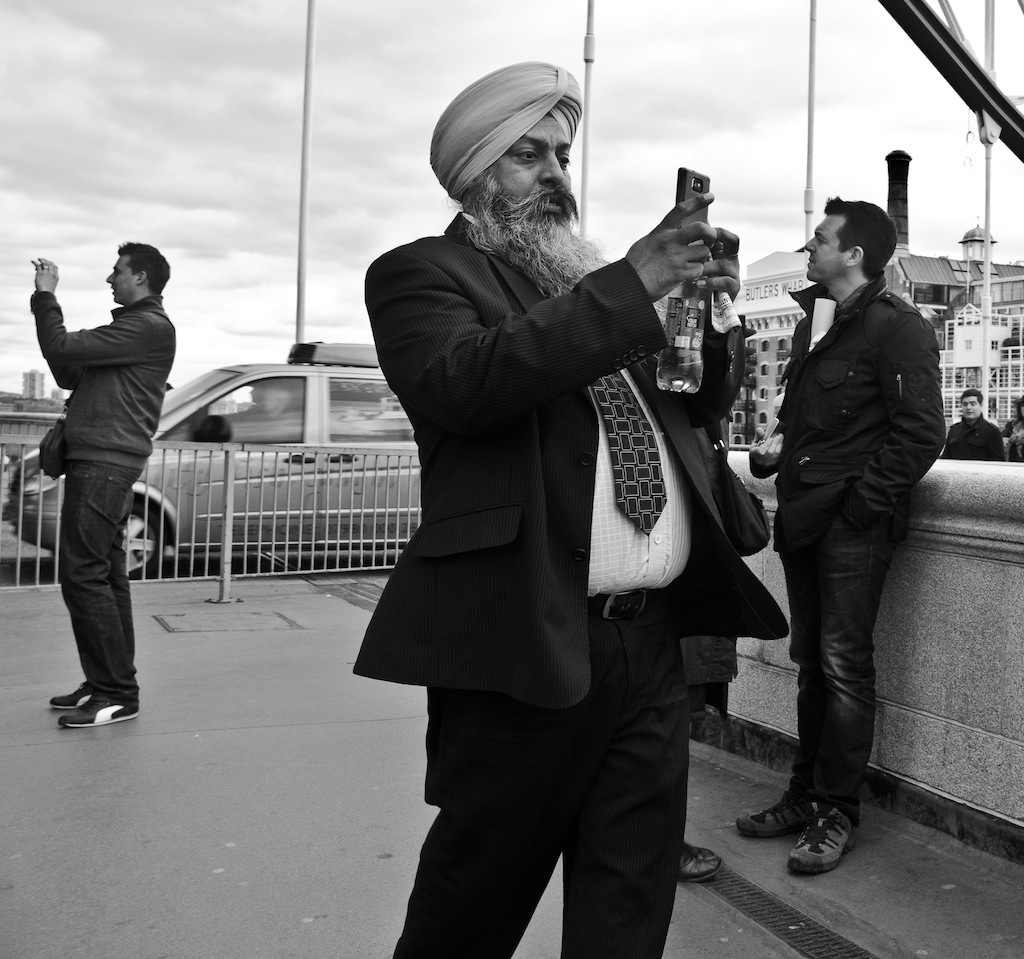 Editor’s Note: Daniel Hoffmann is a photographer from the small town of Viborg Denmark. He’s an avid street shooter who photographs regularly throughout Europe. In addition, he has traveled to both the New York City and China to shoot street life there.

Earlier this year Daniel published his first book titled Daniel Hoffmann Street Photography. Through his activity on 500px Daniel became friends with noted US photographers Gene Lowinger and Ronald Beams. Lowinger wrote the foreword and Beams provided commentary for many of the photographs. The combination of Daniel’s photos and Beams’ comments make the book an excellent learning experience.

Dainel was kind enough to allow us to publish his favorite street techniques in this issue. Below some of the photos you will find an audio player which contain short comments about them by the photographer. Enjoy!

Shoot From the Hip

Shooting from the hip is, in my opinion, the most important way of getting good candid street photos.
This can be done by letting the camera hang in a strap around your neck and resting on your stomach (best for horizontal
shots) or by carrying the camera in your arm against your left or right hip (best for vertical shots). 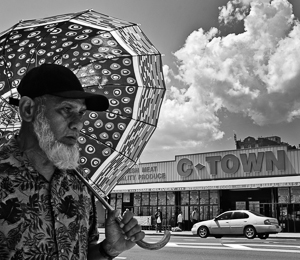 That means, you can shoot pictures, without having to look in the camera viewfinder.
Of course, you will need to practice a lot in the beginning, but it gets easier. I think it works very well with a 16-24 mm lens (24-35 mm full frame).

I like to rest my left arm on the camera and press the shutter with my thumb or I use a wireless remote control in my jacket pocket. You can control the camera’s vertical angle by leaning backwards. To get the perfect picture at exactly the right angle I like to hold the shutter button down for continuous shooting whilst leaning.

Shooting from the hip gives a lower photographic perspective, which I don’t consider to be a problem and most of the photos in this book are actually taken using this method.

This photo is a good example of shooting from the hip. In Queens, the temperature rose to 40 degrees (104 Fahrenheit) and many people were using umbrellas to protect themselves from the heat of the sun. 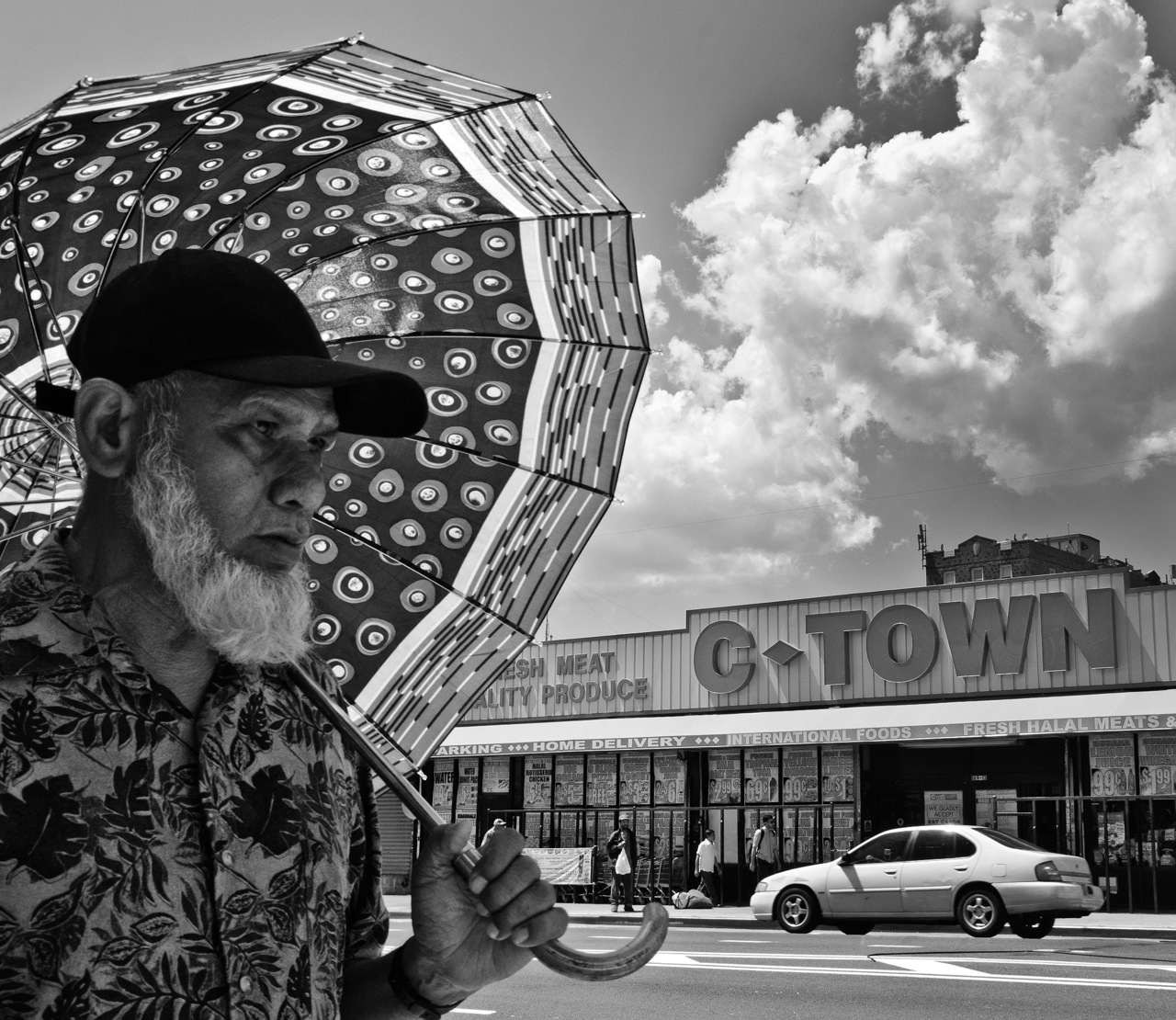 Protection From the Sun

Shoot at a Close Distance

For me, street photography is all about taking candid shots of everyday people doing every day things – generally in black and
white and using a wide angle lens. To achieve this, you have to get very close to the people you are taking photos of.
The famous Magnum member and war photographer Robert Capa once said: “If your photographs aren’t good enough,
you’re not close enough”. I say: “If your street photos aren’t good enough, you’re not close enough”. 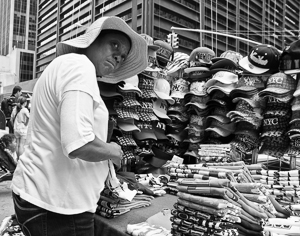 It´s generally not a problem to take photos at a close distance in a big city because of the huge number of people
constantly moving around and the noise levels of both people and traffic. It’s even easier in tourist areas as people are so used to having their pictures taken.

This shot of the lady selling hats on the streets of
Manhattan is both shot from the hip and as you can see,
at quite a close distance. 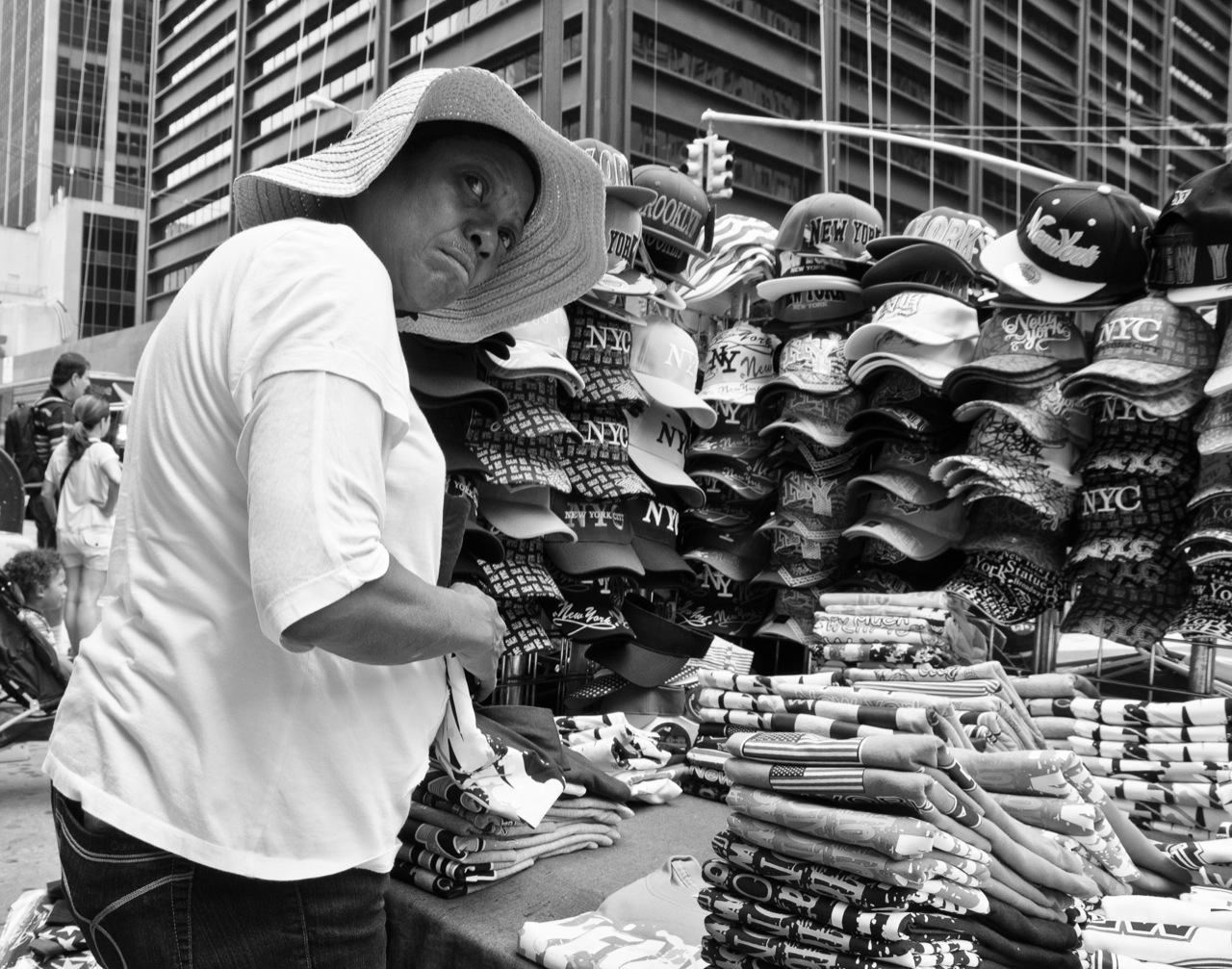 Use a poster or an interesting background and then wait…

You might notice an interesting poster, wall painting or other type of background, which can, in many cases, be used as a good
basis for street photos, as shown in the example below with the poster of the young well-dressed woman. 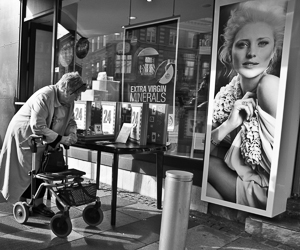 The window display caught my eye, and I waited a few minutes for an interesting subject to walk past. The old lady with the
walking frame came strolling past me and I took the shot to show the contrast between young and old.
What I didn´t see when I took the photo was that the old lady was looking for “extra virgin minerals”! That was just a piece of luck, and I think it completed my photo.

Instead of using the old lady as the subject, I could have waited for a young well-dressed woman similar to the one on
the poster to walk by, or for a man with his head turned to look at the woman on the poster.

For another example of using background for street photo,
you can go back to page 43 of my book Daniel Hoffmann Street Photography and look at the photo to the photo “Pizza delivery?” where the background was a painting on the wall. A background could also be patterns or stripes
on the ground, like looking down on a pedestrian crossing. 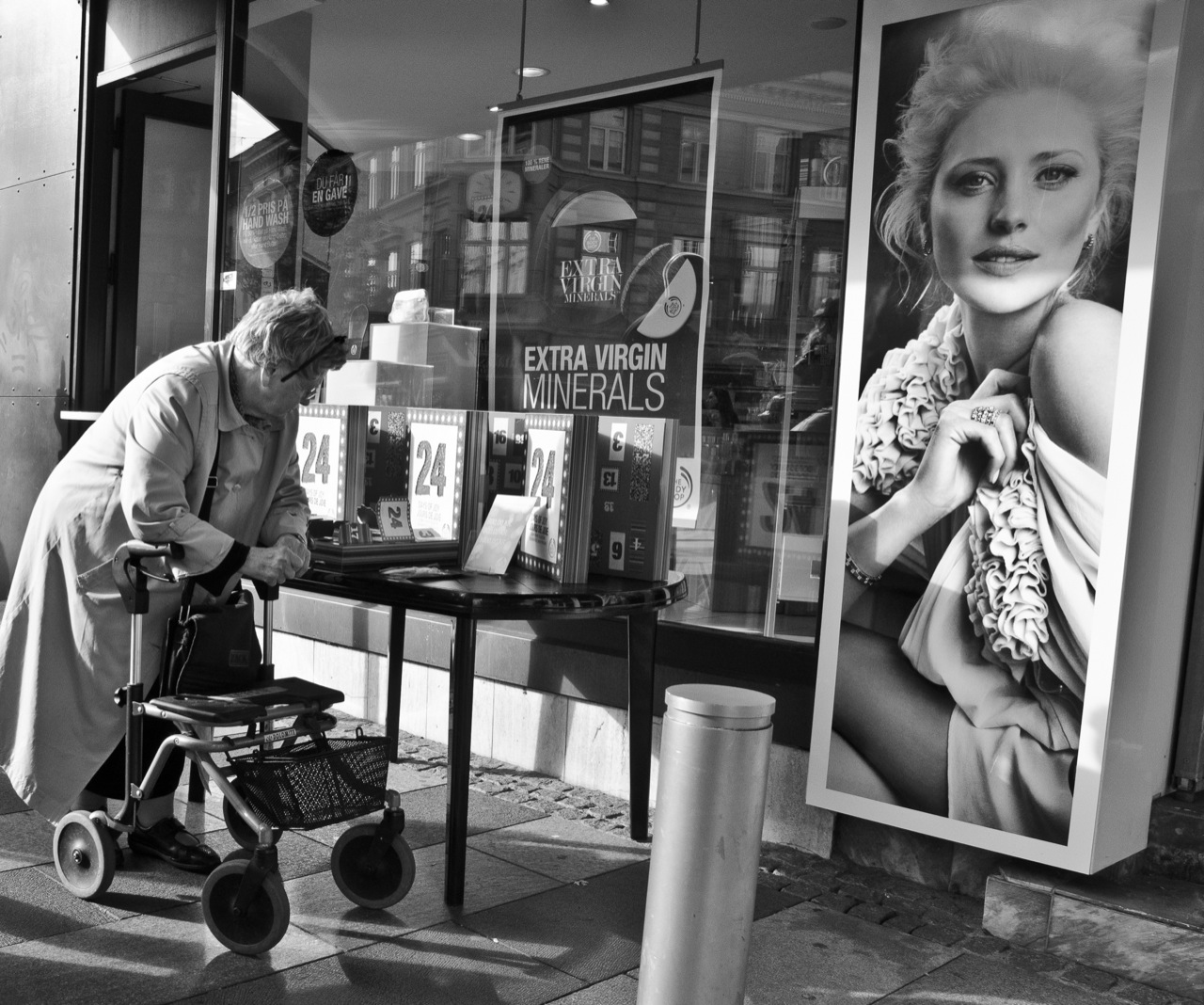 Do a Tight Cropping 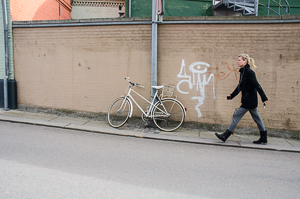 There is an old rule in photography saying: When you look in the viewfinder – look to the four corners and if you don’t
see anything important there, then GET CLOSER.

Of course the rule can also be applied, when you have taken the photo, just crop it away using computer software as I’ve done here (original uncropped photo to the right).

I saw this girl on the other side of the street walking quickly and purposefully with a key in her hand and wearing earphones from a mobile phone or an MP3 player. I presume she was listening to music. I wanted to get a photo before she passed the graffiti and the bicycle, as I thought this would be a good background for a street photo. I only had a few seconds, so I just raised the camera and shot from the hip, there was no time for changing focal length. As a result of this, there was too much wall and too much of the street in the foreground, so I cropped the photo to give a bolder image. 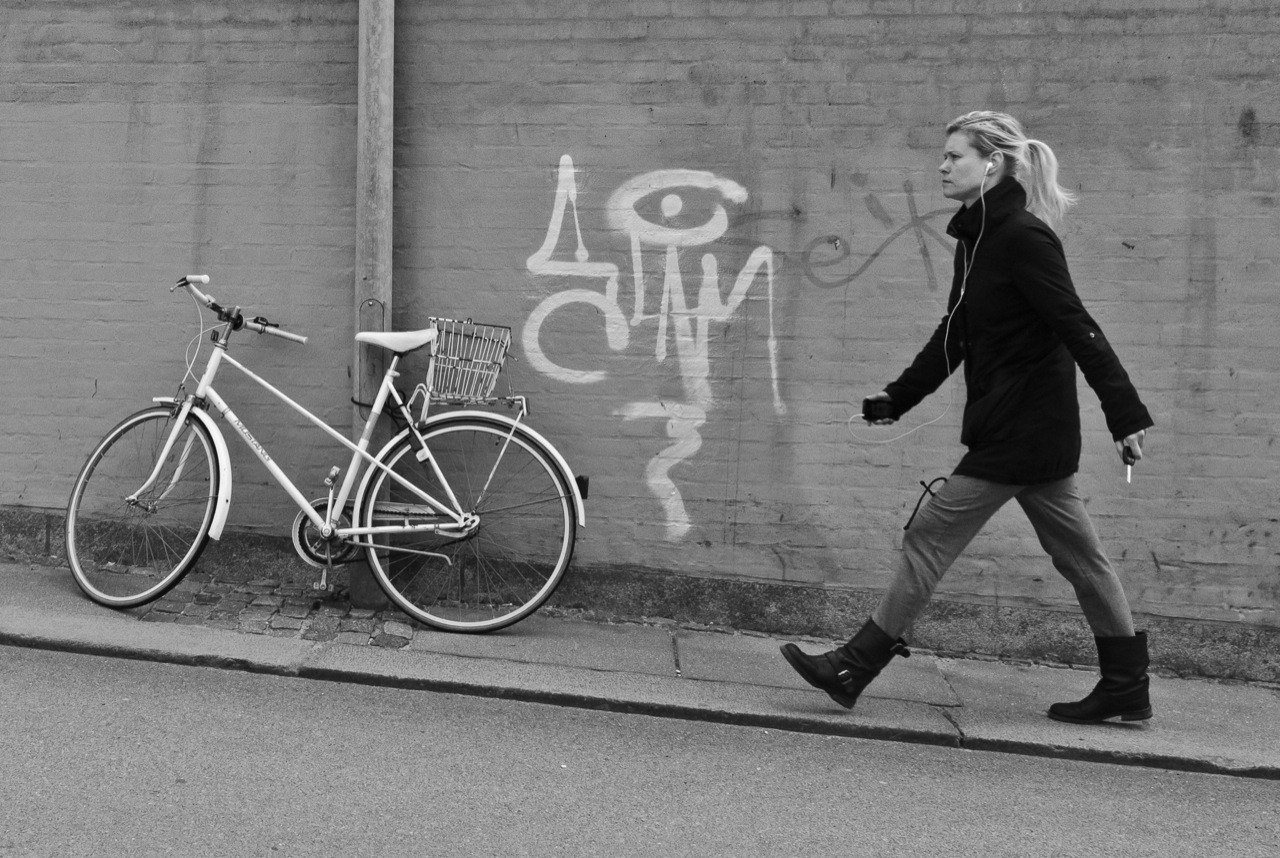 The key to music

Use your photo to tell a story 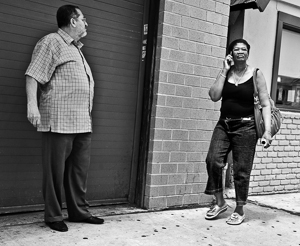 It’s great if your street photos can tell a story, pass on a message or information, or just make the viewer smile. In my opinion,
this is best done using a simple composition.

In this photo from Brooklyn, I noticed the unusual way the man was standing, with his arms turned back and his stomach
pushed forward as if he was trying to stand to attention, while the woman talking on a mobile phone passes him by. Just before
she walked past him, he looked directly at her and I took the shot. 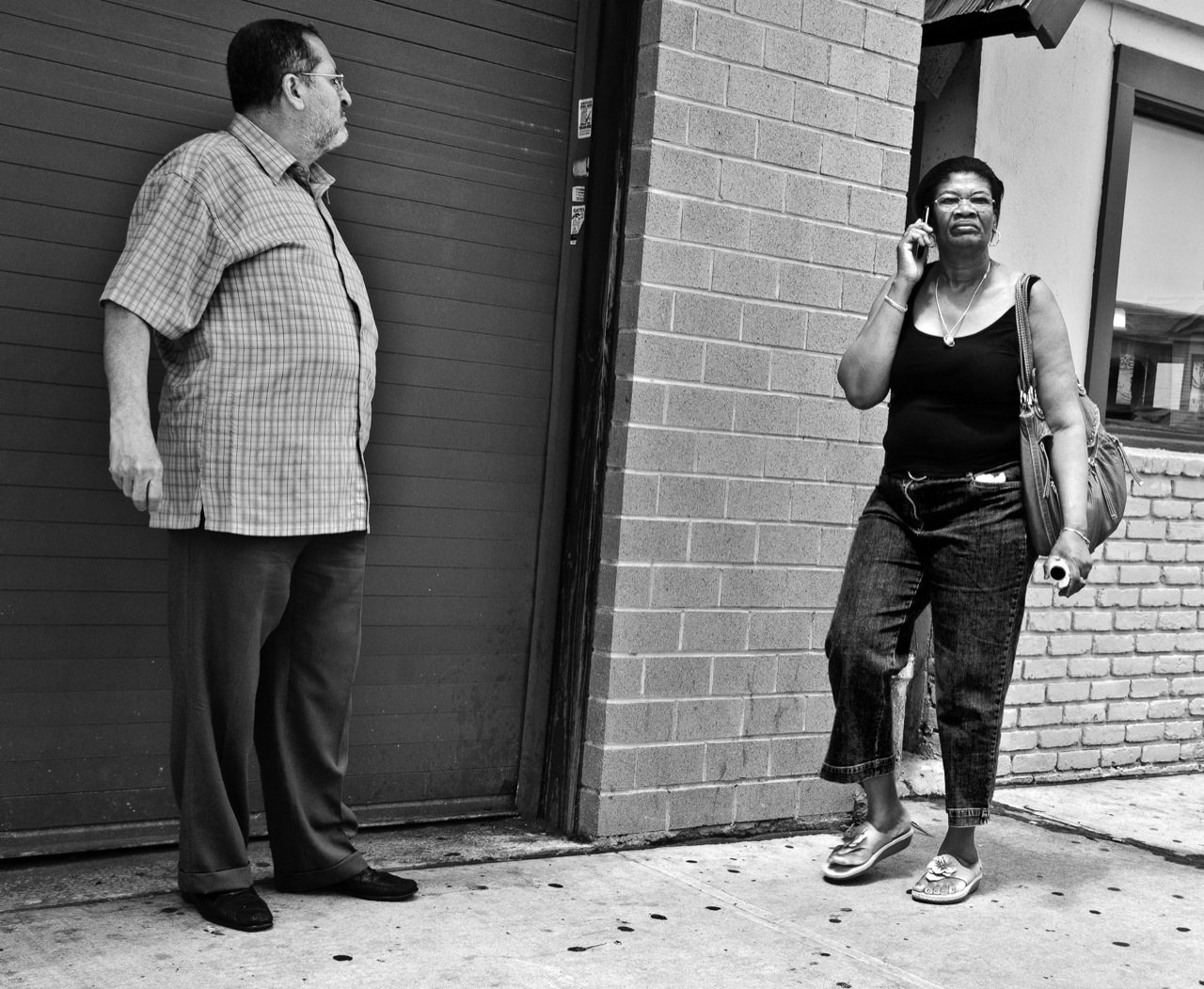 Looking at women in Brooklyn

Don’t be afraid of shooting street photos in low light, as shooting with high ISO is not a problem for modern cameras. Generally, the
background light in cities is enough for taking pictures, and can give great light and fantastic shadows. 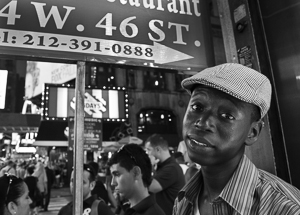 When you are in tourist places, you are often stopped by people trying to sell you something. It could be to ask you to rent a bike, see a
theatre performance, or as in the photo below to visit a certain restaurant. This is what I do: Tell the person you will take a photo of them
with the advertising sign on so you will remember the restaurant and the phone number. That’s what I said to this young man, and he
stopped, stood still with his sign and looked directly into the camera and I got my shot. 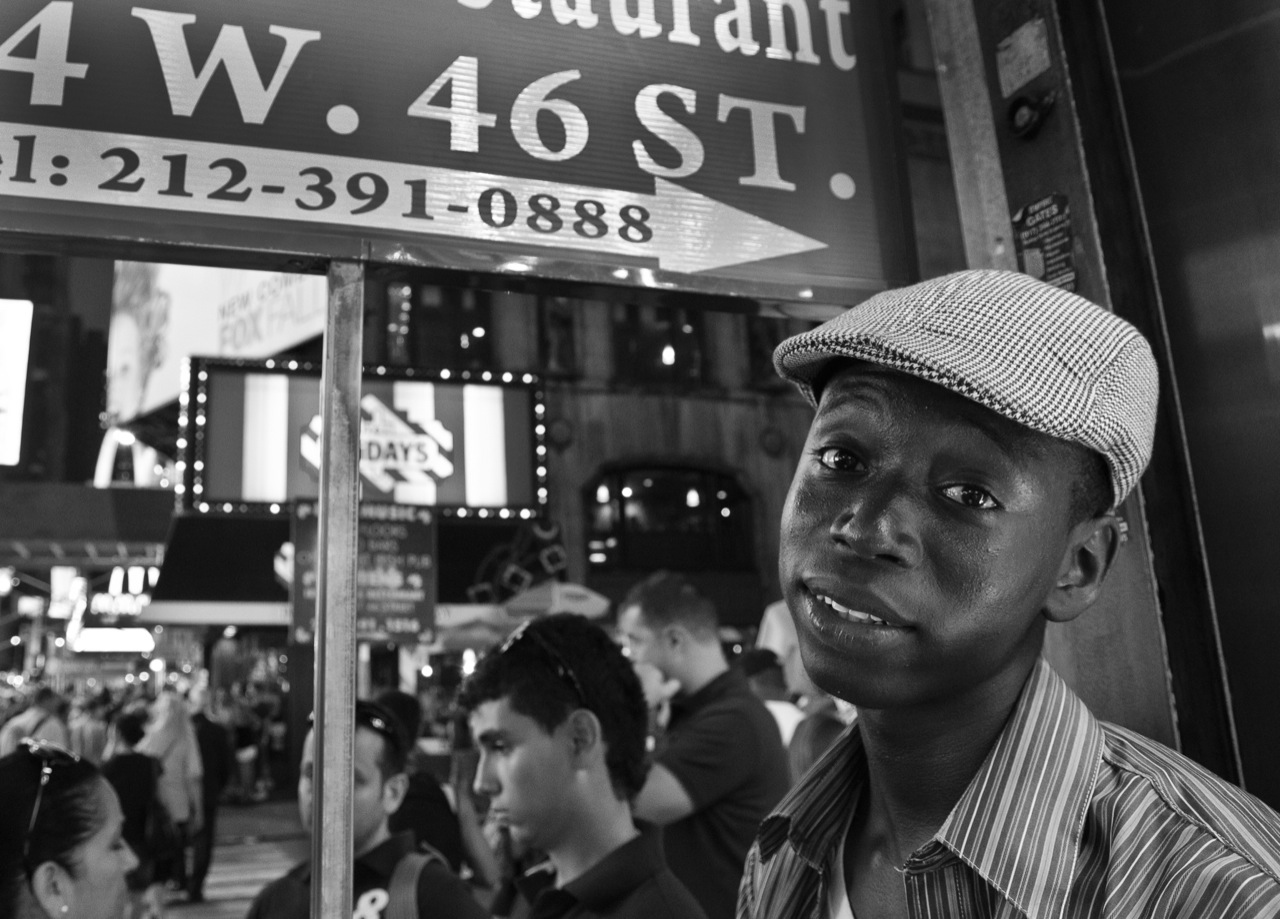 Street photography can be taken anywhere in public 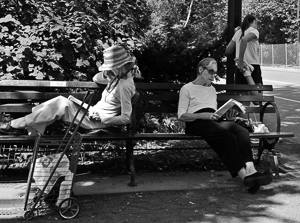 Remember, street photography is not only photos taken in the streets, but can be taken anywhere in public. You could be at the beach, the
train station, at an art exhibition, a football stadium, or in the park as shown here.

This photo was taken in Central Park. At first sight I noticed these two older ladies sitting and relaxing on the bench. Suddenly a runner
stopped to stretch her legs. I think it completed my photo and in a way told a story about what people are doing in Central Park. 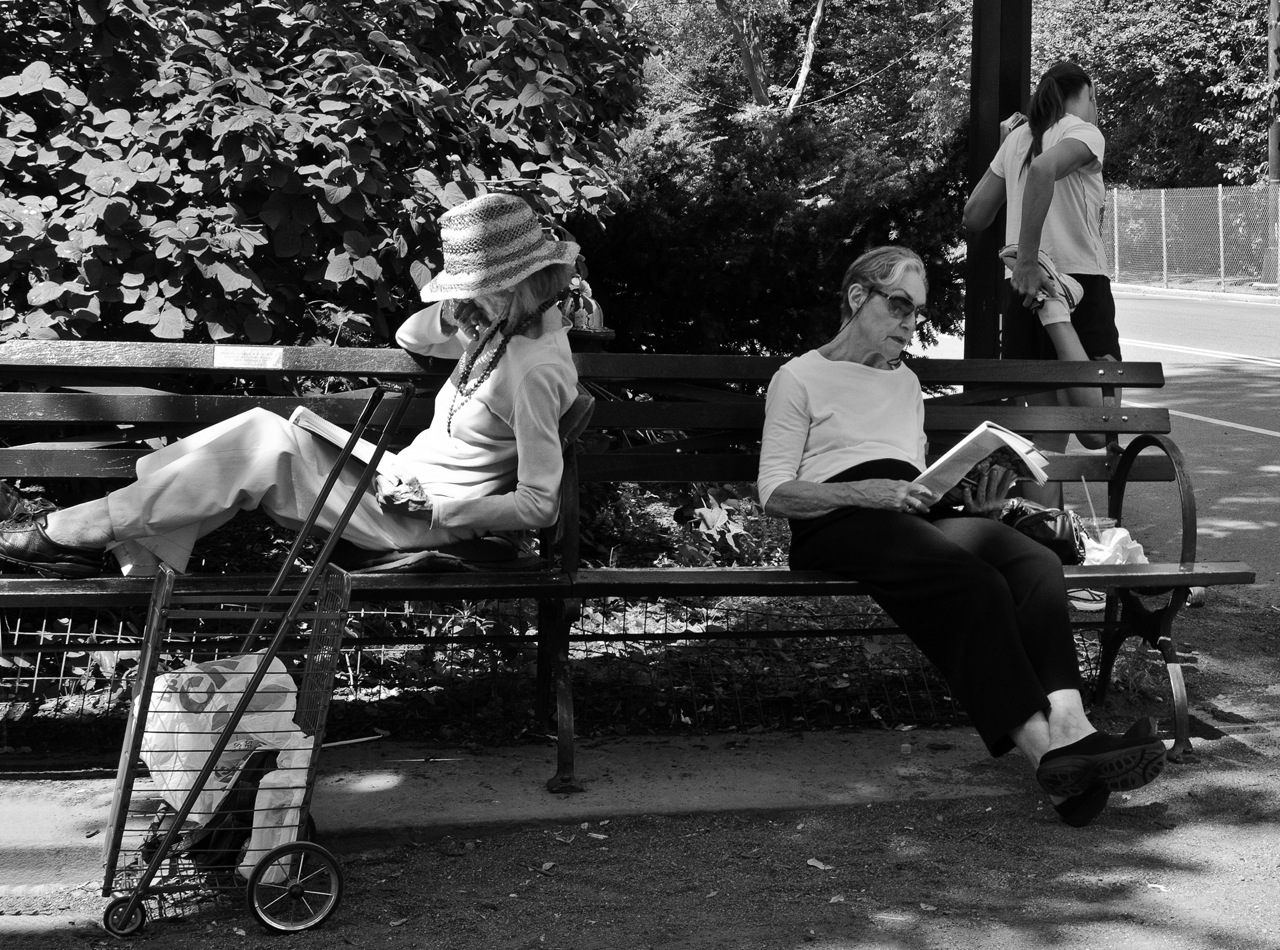 Relaxing, reading and running in the park

Ask for permission before taking a street portrait

Normally, I prefer to take candid photos of people, because then the photo shows them acting naturally. Nearly all my street photos are
taken that way. But sometimes I want to take street portraits, so I ask the subject kindly and politely for permission before taking their
picture. I find it helps if I explain why I want to take their picture, eg. “You have a cool beard” or “I am a tourist, documenting life in the
city” and then I usually get a “yes”. 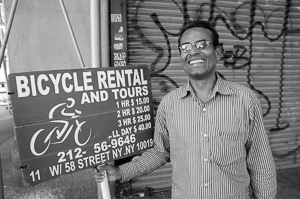 Sometimes I have to persuade the subject to let me take their picture, so I tell them that I will email a copy of the best shot to them. I give
them my visiting card with my contact details and add the file number of the photo sequence I have just taken and ask them to email me
this file number and I will send the picture. Then it’s up to the subject to remember this. When you send the photo, you don´t need to
send it in full resolution, I suggest a low resolution photo of max. 1024 pixels.

I asked this bicycle rental man if I could take his street portrait, and without asking any questions he took his sign and placed it on the
ground beside him, looked in the camera and smiled – I got my photo! 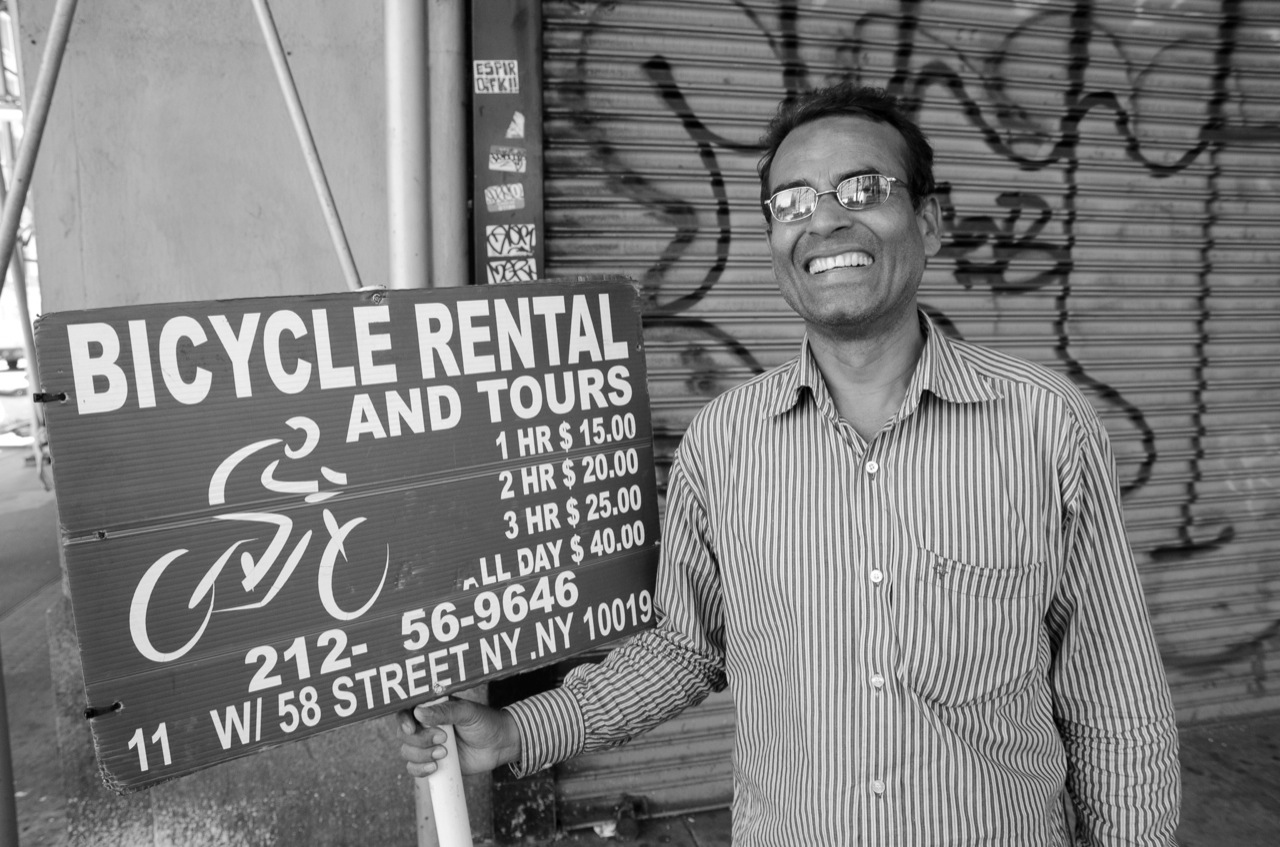 If you use lines, curves and patterns in your street photos, you can create even more interesting street shots. Buildings, walls, stairs,
pedestrian crossings etc., can help to give your street photos a great composition. The father of street photography Henri Cartier-Bresson
used this a lot. A typical example is his photo “Hyeres, France 1932”.

In my photo from Chinatown, New York, I used the stairs to create a diagonal composition, pointing down to the man. This photo is not
shot from the hip and maybe that´s why I managed to get eye contact with him for just a few seconds, in the time he was trying to locate
his lighter in his pocket. 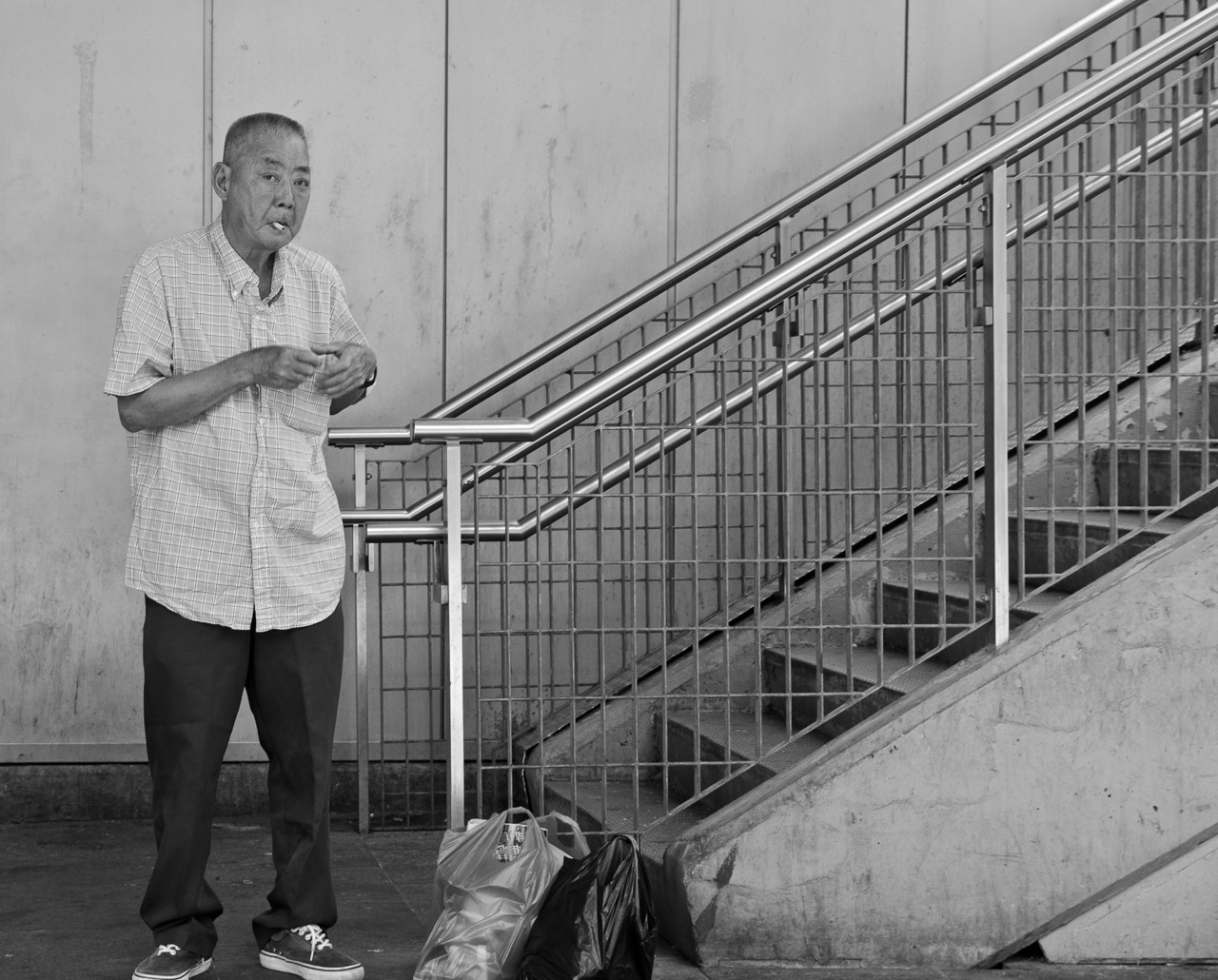 Convert to black and white 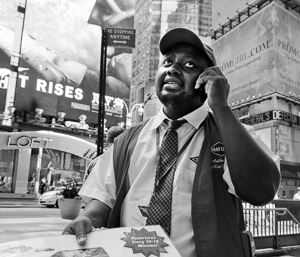 I’ve thought a lot about why I convert nearly all my photos to black and white, and it’s simply because I love black and white photography. I like the tones, the
beautiful shadows and I think it´s easier to tell a story or communicate a
message using black and white because you don’t get confused by the colours.

I started my photographic hobby, by developing my own black and white photos
in the darkroom, and it’s difficult for me to say how much the magic of the
darkroom has influenced my current work in the digital age.
The “Gray Line” salesman, was trying to sell me a bus trip whilst at the same
time talking to a customer on his mobile phone. I was standing very close to
him, which you can tell from the low angle of this shot resulted from my shooting from the hip. 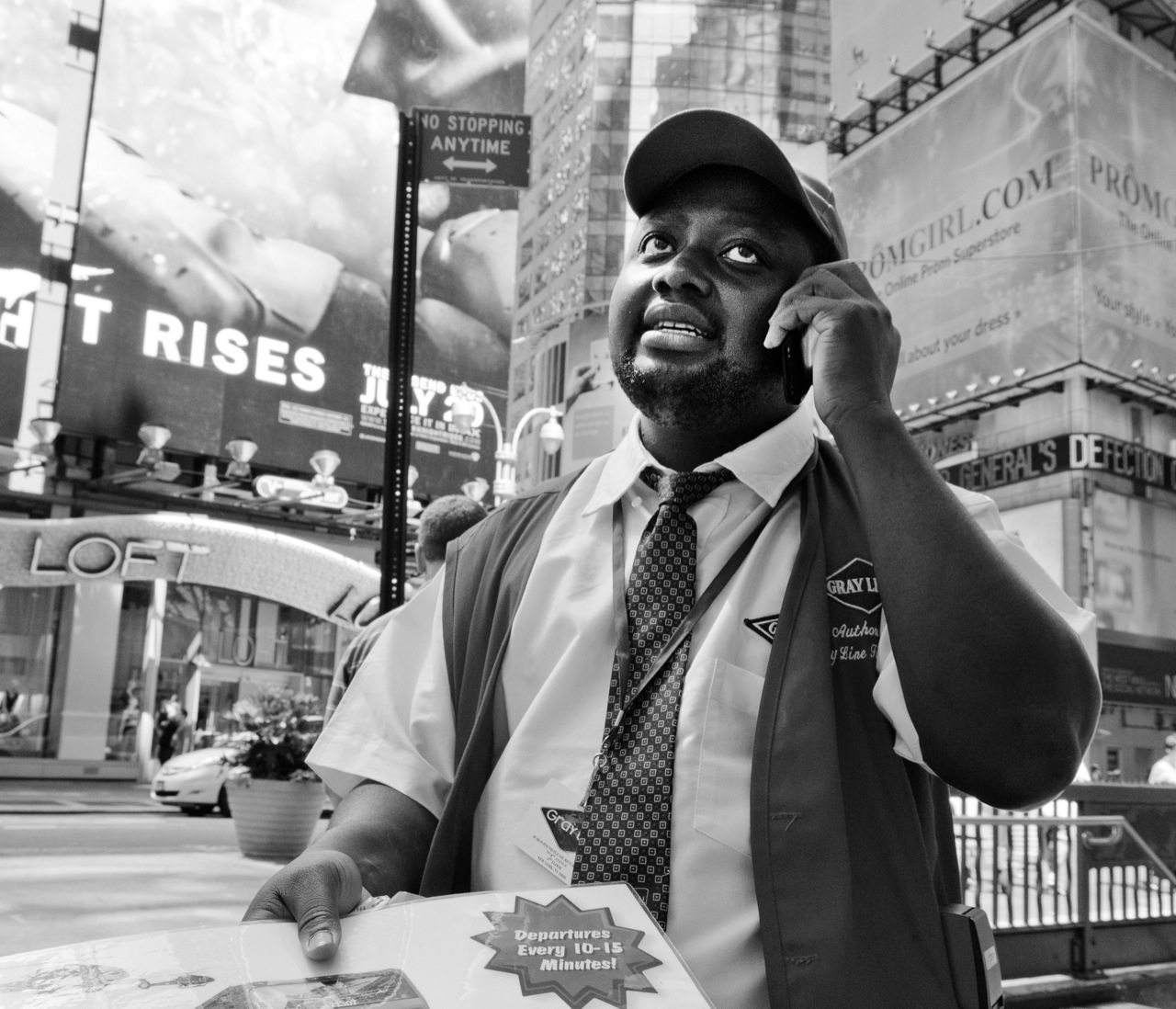 Where to Find Daniel