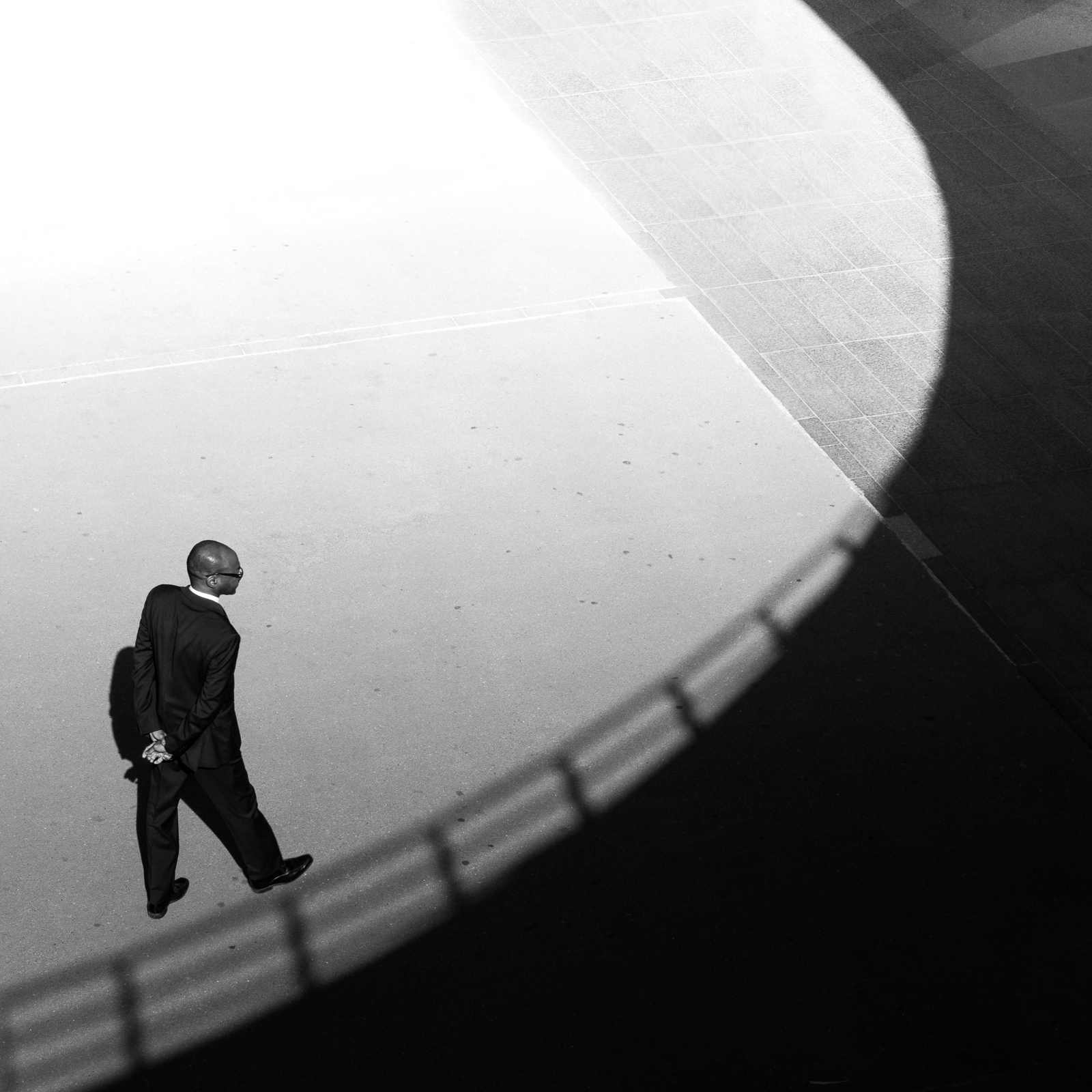 An Evolution to Street Photography

I got my very first camera four years ago, mostly for taking photos of my little boys. Portraiture was the starting point. I also felt that photography might fulfill some artistic inspiration I had, but it’s not so easy to artistically shoot your babies without looking like a self-satisfied parent. So, at some point, I started to look for some more universal photographic subjects in my daily environment. Lazily, I found them right on my doorstep! Without having to get to any exotic or unique places, streets instantly offer a large variety of themes. And you never need to wonder what to shoot next. It’s happening all around us.

I’m almost completely uneducated in photography (and I think I’m fine this way at the moment. I am not in a rush to be intimidated by the Masters) but there are a couple of authors, such as Rupert Vandervell, who have shown me how urban scenes can generate strong visual layouts. That was deeply inspirational. 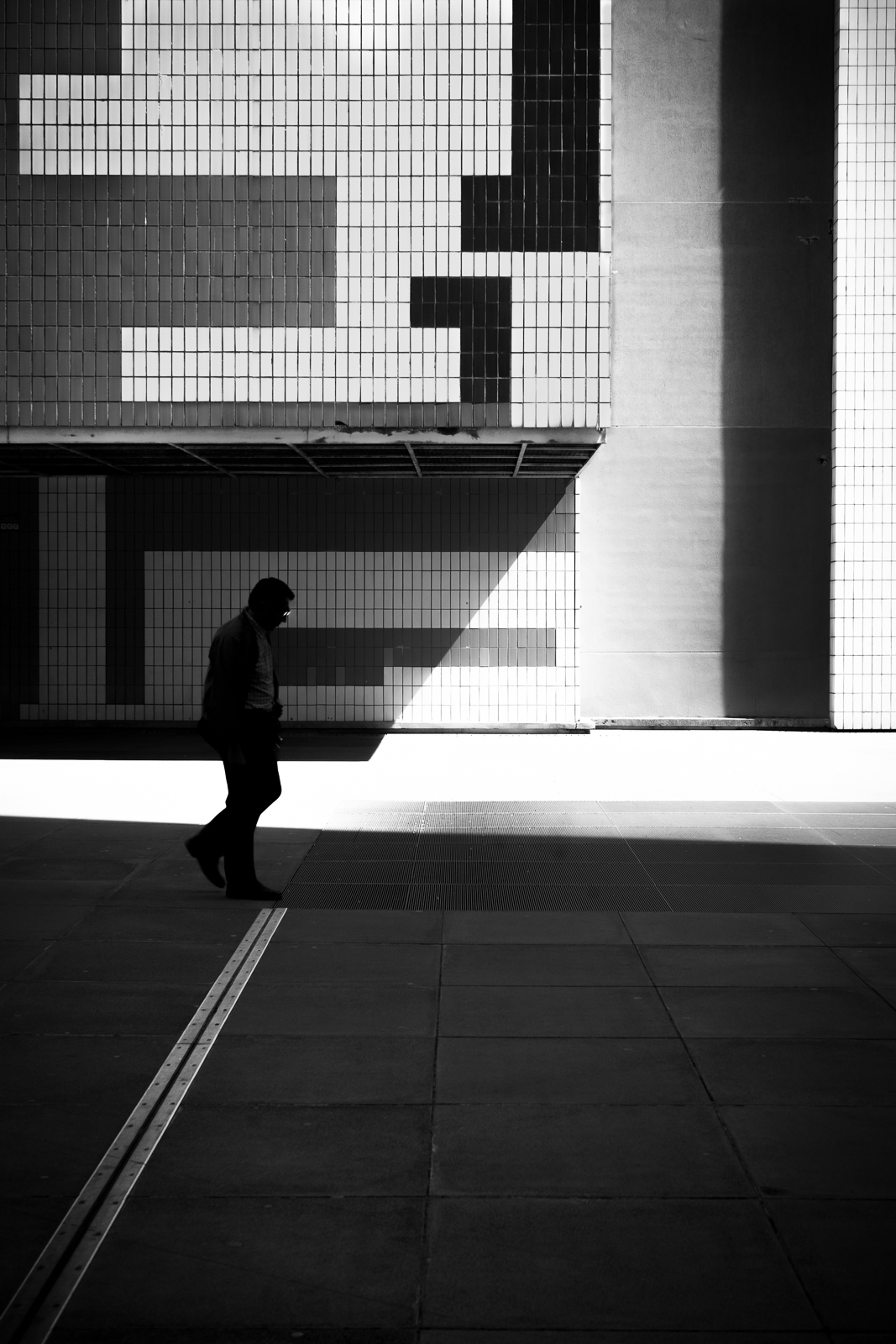 I’m not going to be original here, the one key to reveal the potential beauty in an image is the light. I expect that it sculpts a structure in the scene. When I’m hunting, the trigger is a light pattern. Something unusual, structured and contrasted (sunglasses can help to quickly catch it). And if that light pattern can match or interact somehow with a human activity, I’ve found the ingredients I was looking for.

I still feel very awkward controling the light at nighttime. Shadows are more diffuse and it’s harder to get any geometric layouts. But it is definitely something I would like to try to handle better. Night shots are a whole fascinating universe. 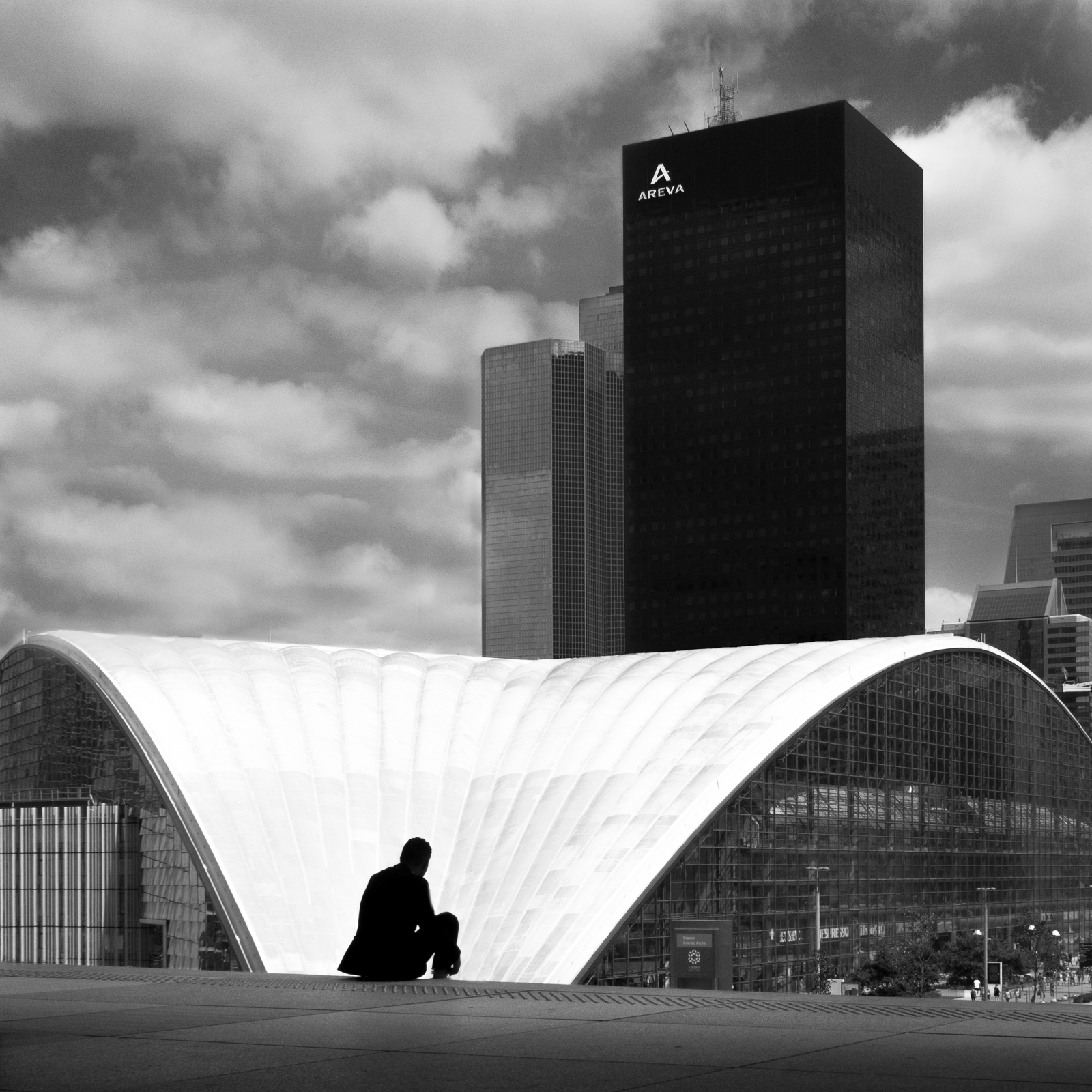 Although buildings are recurrent items, I don’t consider myself as an architecture addict (and I’m probably not an enough old photographer to feel belonging to any specific style). Architecture often brings a structured framework that helps to compose and it also sets a specific scale to play with when including a human presence. But to be honest, my goal is most of the time to include someone in my shoots. Probably because it adds a strong cognitive trap. The result is much more powerful, incarnated and dynamic. When it’s not possible, I feel like I missed something. And it’s absolutely delightful to feel like a zoo visitor distantly observing some evoluted primates evolving in their own environment!

Whenever I can, I mostly shoot silhouettes when it comes to street photography. I absolutely love the aesthetic shapes they bring. Also they provide a symbolic dimension to the shot that brings a poetic touch. Even so, I am often frustrated by the fact that a good silhouette relies on small and random details in the posture. Any legs not enough separated or an hidden arm, and the whole picture is ruined. But it’s part of the game. 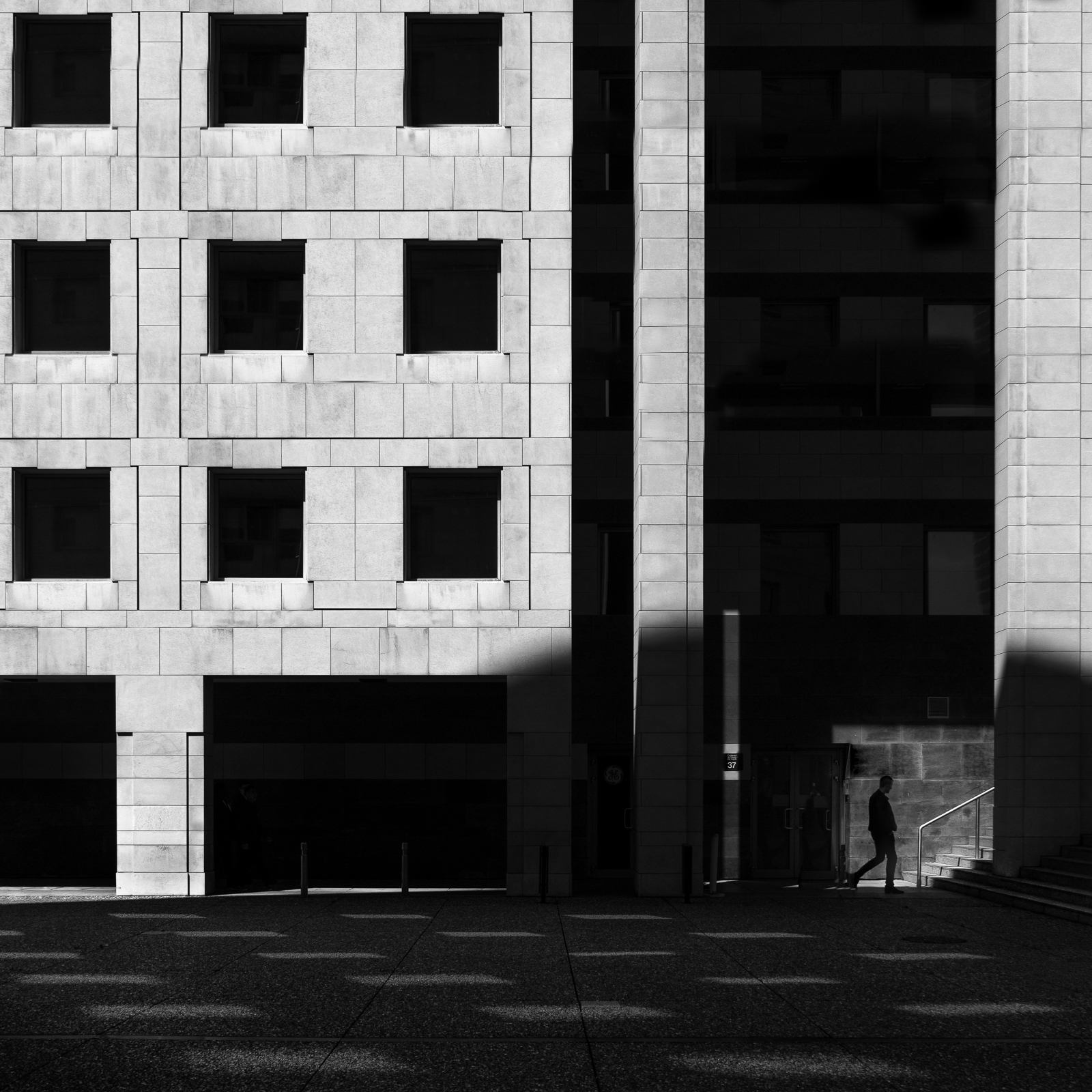 Very few of my shots come with obviousness. Most of a time, it’s always like a magic process from which I feel more like a witness than an actor. But the above shot came quite naturally.

It all started with those square patterns on the ground. The initial idea was to make a dialog between them and its reflection source, the building. But the shortest focal range I had with me was too long (around 28mm) to be able to show the whole scene, so I needed a Plan B. Then I saw that shiny stair raliling on the right side. It was perfectly framed by a window of light and I felt that that could efficiently close the composition on the image right side. So the only thing missing was a guy taking those stairs. The place was not very crowded so I had to wait at least 20 minutes for the One. Ironically, I didn’t notice that unlikely thin light column highlighting the number ‘37’. Twenty minutes earlier, and that 37 would have probably been randomly cut and the composition could have even been polluted! Lucky me.
All in all, the thing I both like and dislike in this shot is that everything doesn’t appear easily I think.

My Kind of Urban Beauty 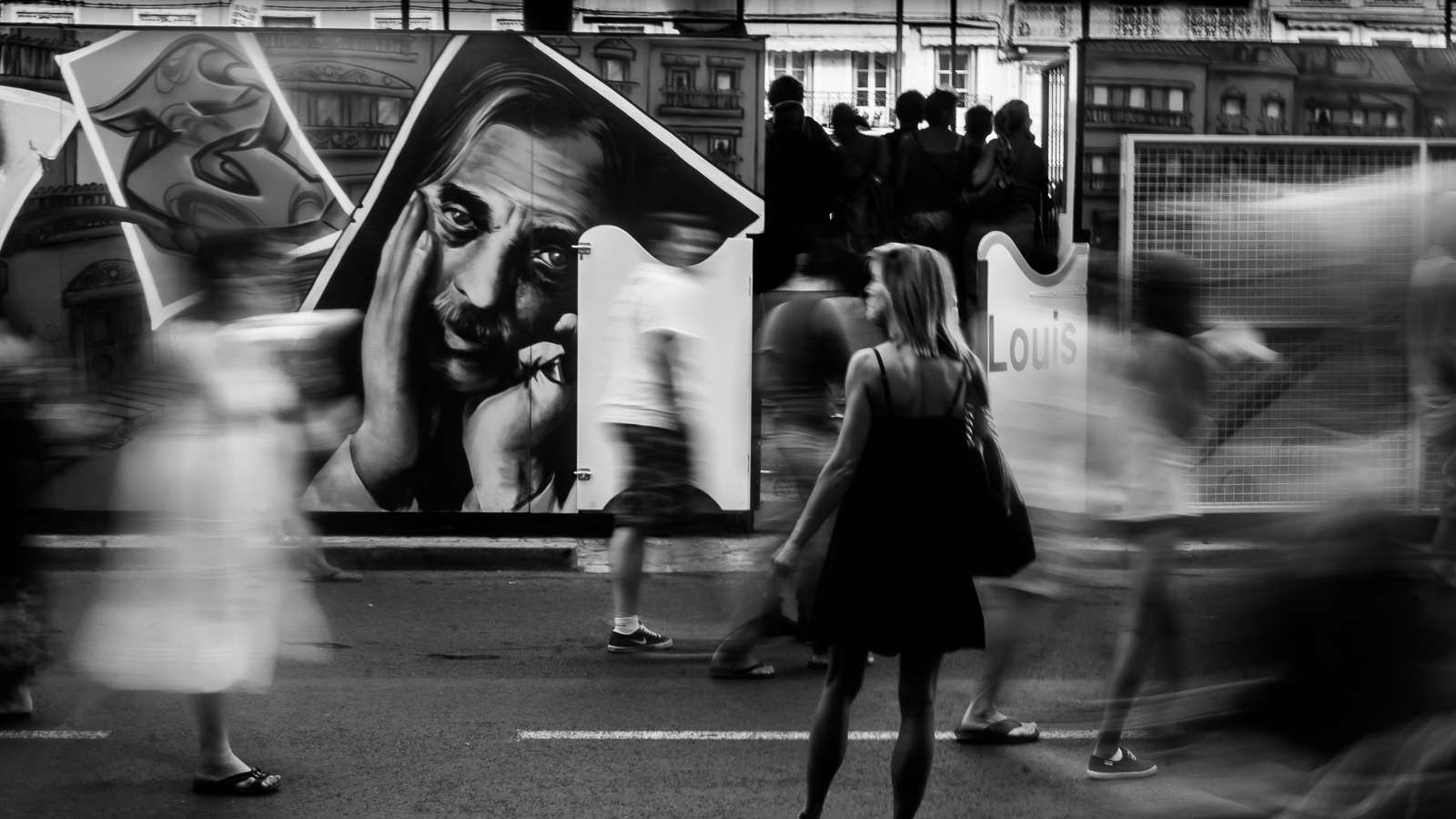 I would say that my style is mainly graphical and humanist. Both components are important. I don’t feel like I have a strong connection with candid “real-life” street photographers who choose to depict subtle and accurate emotions on someone’s face in the street, but compromising the purely graphical aspect.

As a viewer, I like photographers that try to flush the urban beauty out of nowhere, showing our familiar streets with a singular prism. That doesn’t come along on its own. The photographer has to act to extract it. That’s what I try to humbly do I guess. 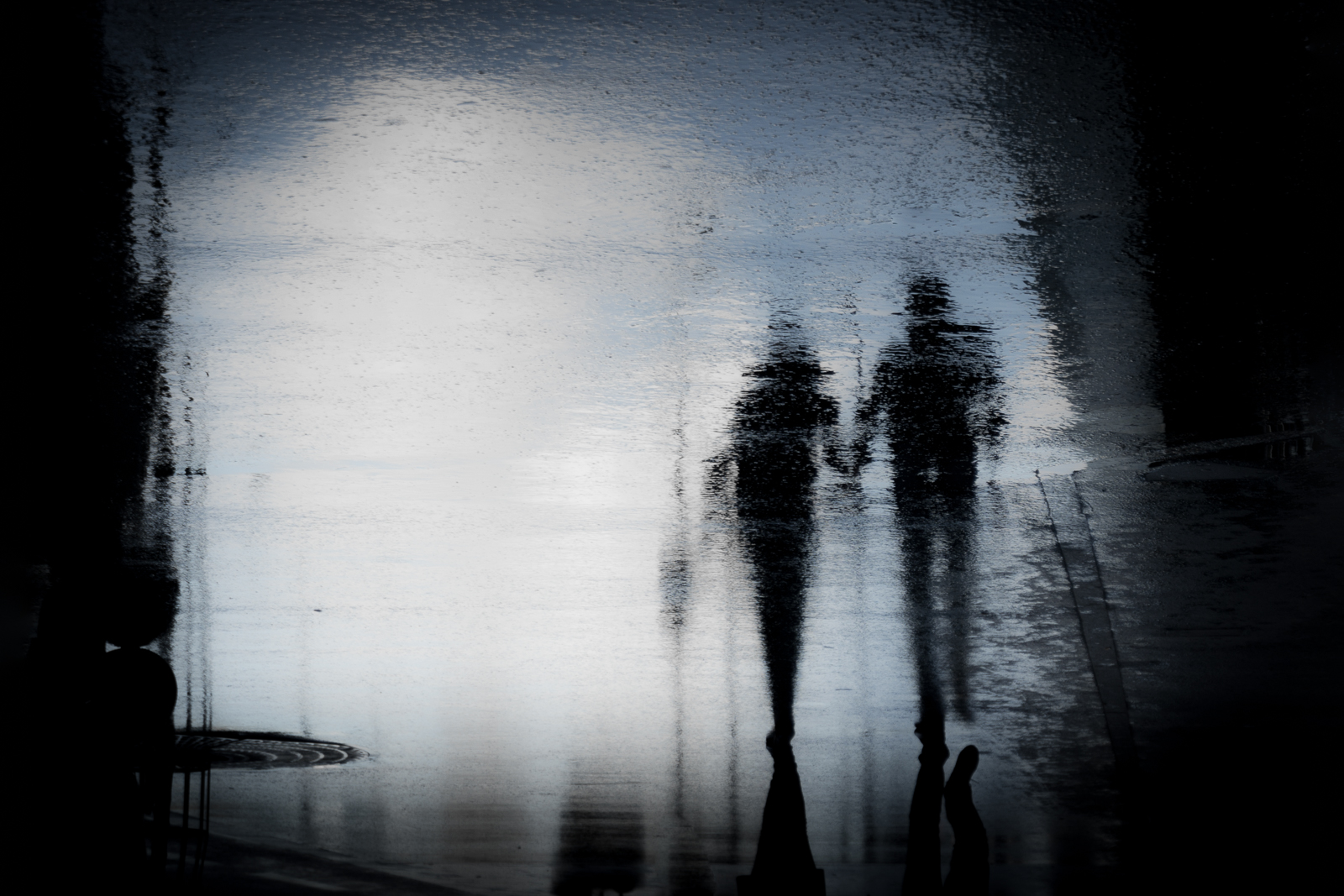 Editor’s Note: You can see more of Jean-Philippe’s work by visiting his Flickr photostream. Jean-Philippe was selected from our Flickr group (Street Photography Magazine) where we regularly choose photographers’ work to be published in our magazine.