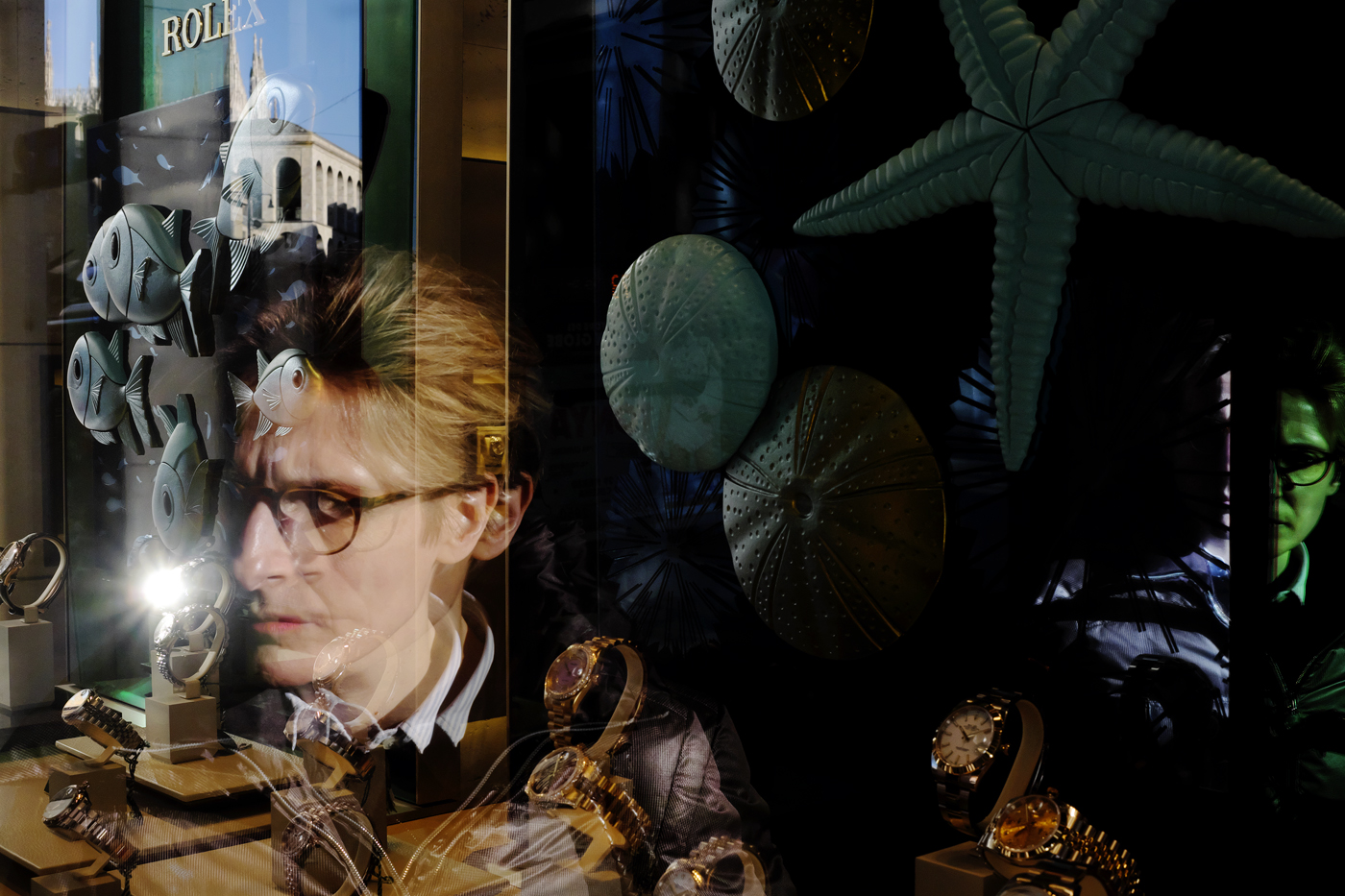 How did you get into street photography in the first place? I know your profile says you do it to ‘out-run your demons and re-enchant your world’ would you mind sharing a little about that?

In hindsight, it was just a technological gear-change up from childhood sketching. Unaware of any notion of street photography, it felt like taking snaps of life around me was the most natural thing in the world to be doing. I was joyfully unemployed and would venture out to the mining villages that orbit(ed) my home town in Scotland. Or else take the bus over to Edinburgh’s Cowgate area, a gloomy Jekyll and Hyde underbelly for folk in the direst of straits. I came home with ‘Hoi Polloi’ and the inkling that photography might be my ticket to better things.

Of course everything is intertwined and pinballing around with the personal. So by ‘out-running my demons’ I mean photography absorbs my attention and distracts me from doing myself a mischief. ‘Re-enchantment’ in the sense of pulling a rabbit out the hat and being rewarded with an approving smile from a loved one or reflected back off my own ego. My mescalin moment. 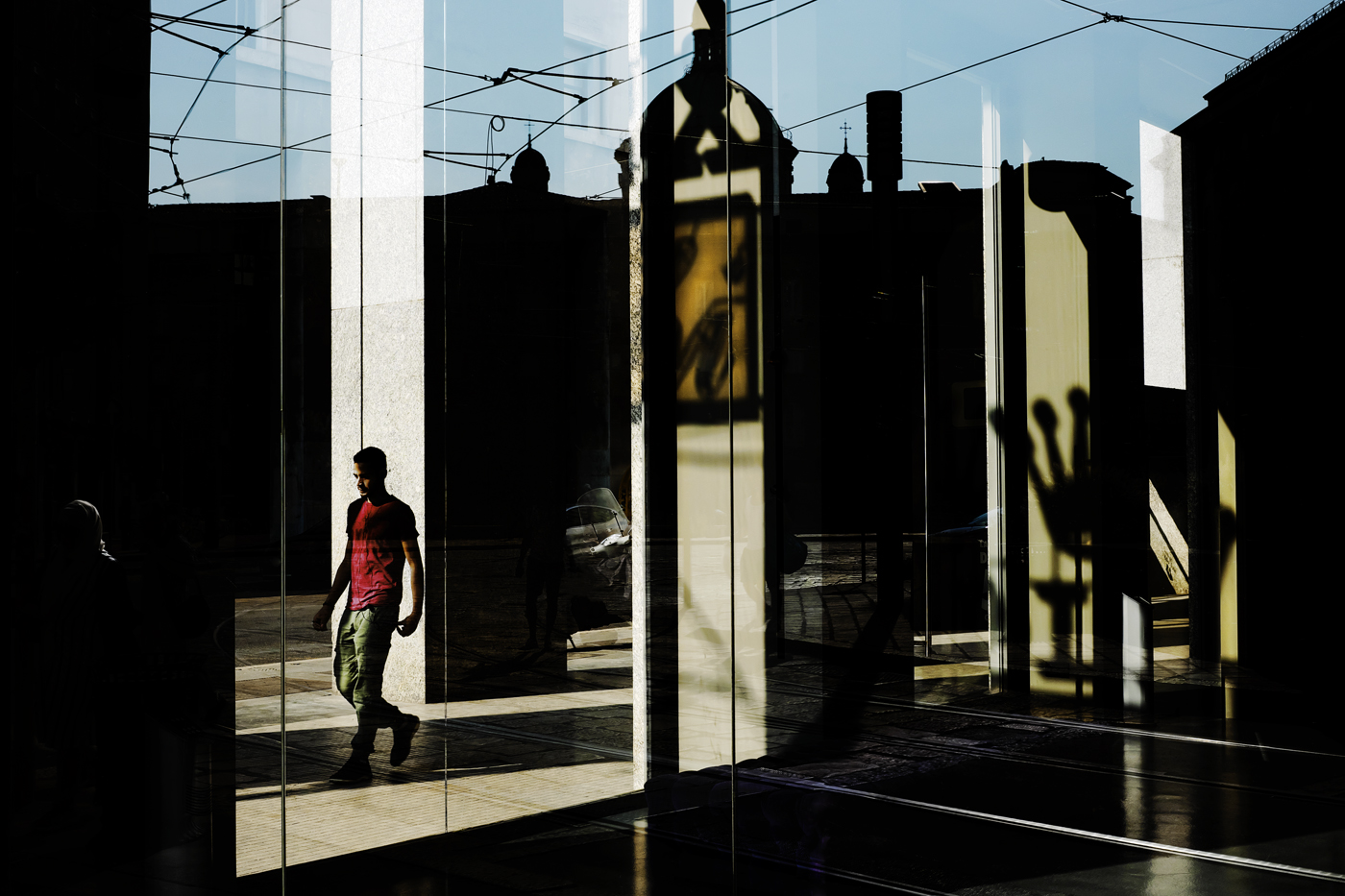 I felt like your images were a little surreal when I first saw them, then I read your bio and I felt like “Eschatalogical eye-candy” was a very appropriate description. A lot of your images do seem end-of-the-world-ish or speak to societal dysfunction (to me). I’d like to ask you why you think that is? Is it a message? A reflection of your feelings? A call for change? None of the above?

All of the above and then some. For a start, it’s a more debonair alternative to parading around with a sandwich board declaring, ‘The End Is Nigh’. I’m aware that a certain radical pessimism can be a fashionable posture but I genuinely believe that a measure of civilisational collapse lies ahead that will make Mad Max look like Mary Poppins. To misquote Karl Marx, capitalism is its own gravedigger. Being devoured by its own algorithm. An aporia.

So these days a fair chunk of my photography is an attempt to convey the early symptoms of that scenario. Turning daydreams and nightmares into pictures. Not in a war zone or slum but the banality of the city centre. Don’t get me wrong, I head out hoping to enjoy myself and shoot stuff that’s easy on the eye. I’m not some masochist on a mission. Not totally. But the motivational undercurrent is a wee bit murky I’m afraid.

Before I fall asleep each night, I lie in bed looking up at the berserk shadowplay the outside lights scatter across my ceiling. Maybe the previous explanation is delusional and in fact I’m just transcribing during the day the last thing my retina records at night. 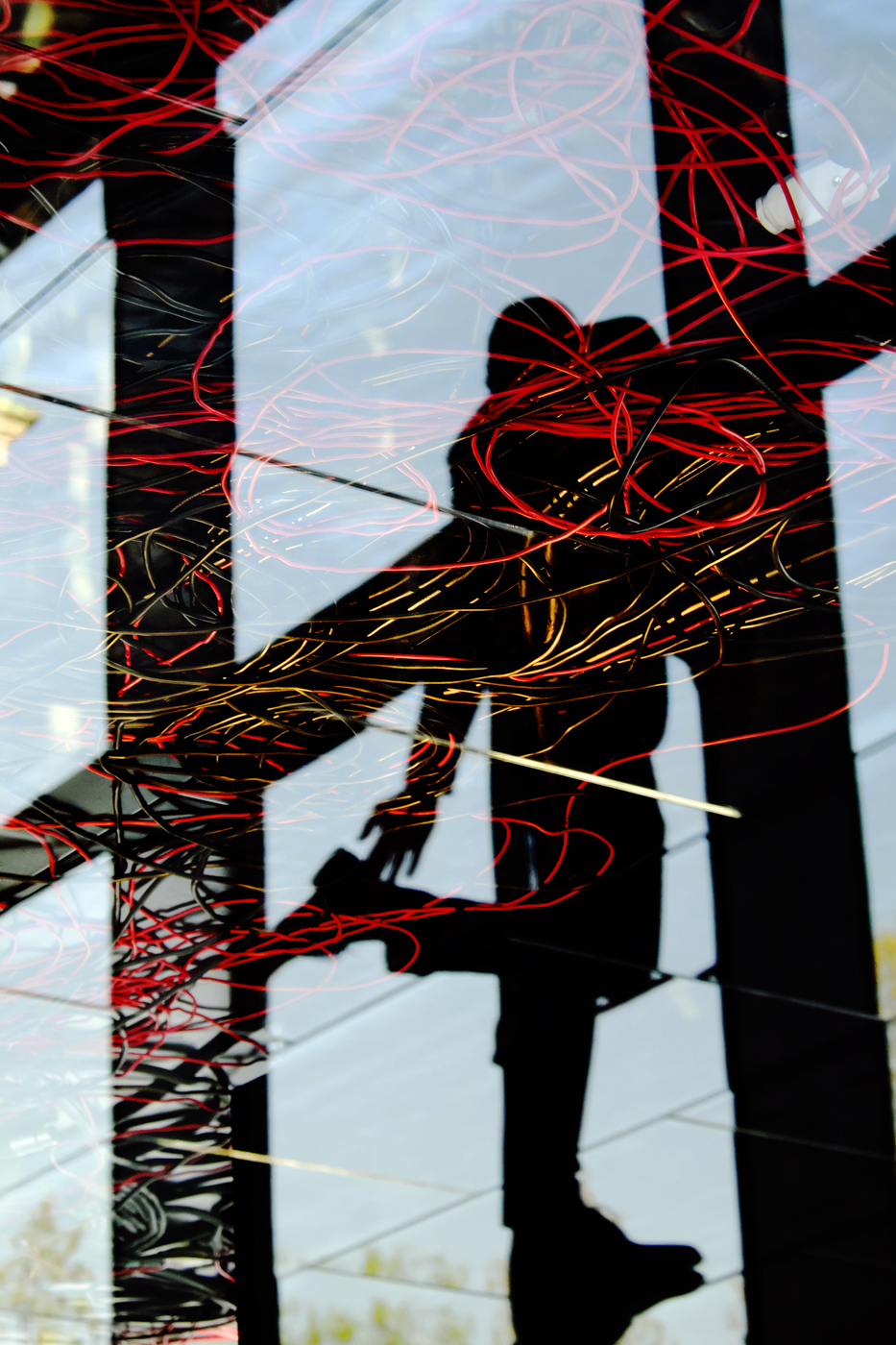 I’d call you a master at capturing reflections. How do you do it? How do you find ideal reflective surfaces and then make an interesting image out of them?

Cheers but that’s the easy part. Maybe the ‘why’ is more interesting than the ‘how’ as it ties into your first two questions and emphasizes content over form?

If I could sing these pictures to you then I would. Instead, I’m hemmed in by photography’s limited lexicon. I suppose I use reflections as shorthand for the idea of an alienated self. A spastic echo. Just as I use silhouettes to suggest an undermining of individualism. Pixellated morse code. An underwhelming box of tricks but the result, I hope, is a sort of magical realism akin to the Turin Shroud on Acid. Euphoric but brooding. My idioglossia.

So I think it’s important to have a point of view. With or without a camera. Something of substance you’re driven to convey and that any viewer worth their salt will sense. The polar opposite of the nihilistic buffoonery which currently finds favour in street photography. Simultaneously symptom and catalyst. The photographic equivalent of the vaudeville petomane. If street photography has any overlap with documentary whatsoever then the cognitive dissonance between social situation and response is off the fu**in’ scale. 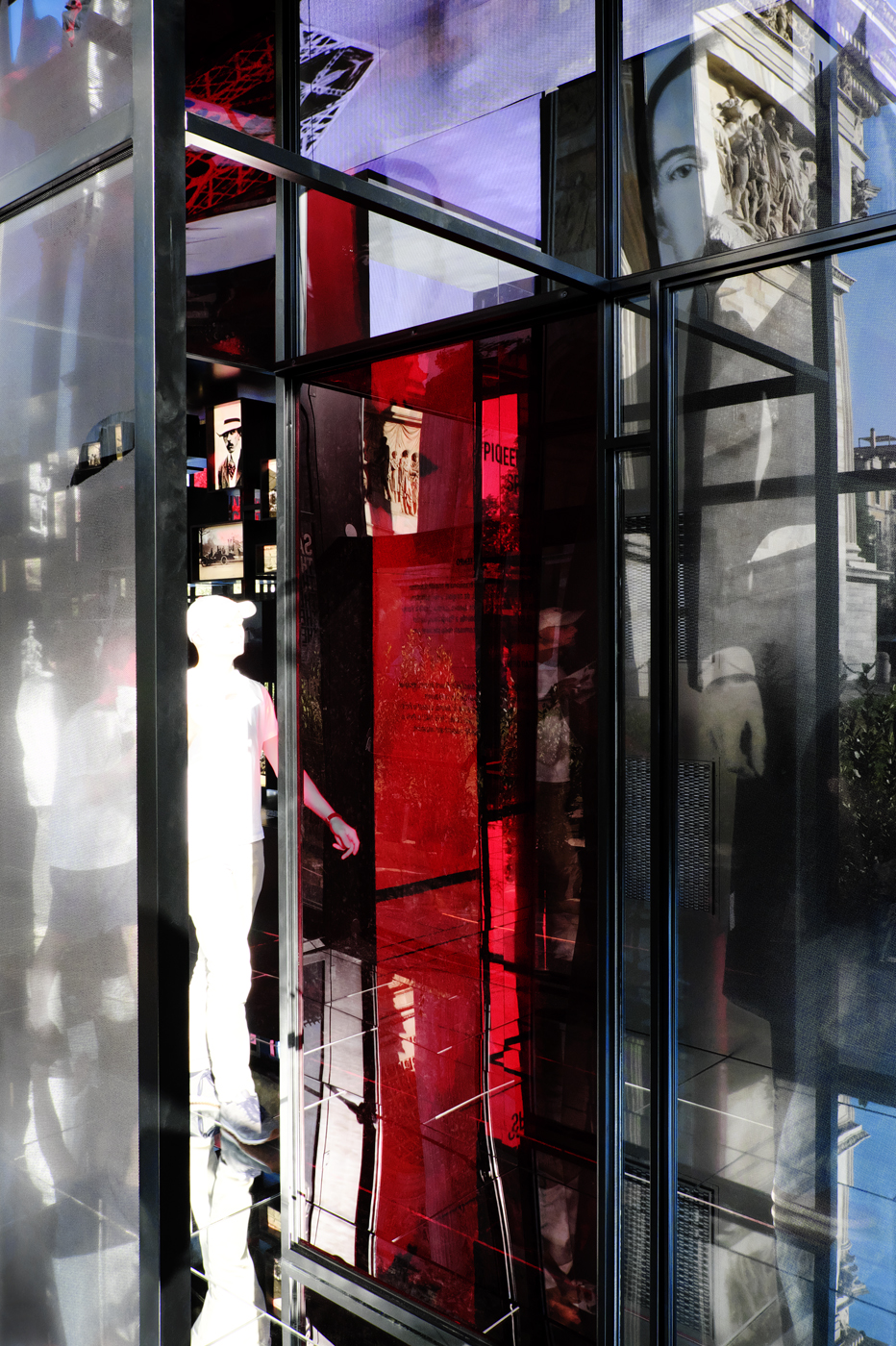 So for example, instead of advertising being judged as say an assault on our intelligence and a metaphor for moral bankruptcy then wondering how we can use reverse alchemy in order to undermine it in a photograph. It’s presumably viewed by street photographers of this persuasion solely as a fun starting point for a dispiriting photograph. Or vice-versa. My idea of a photographer is of someone with a heightened awareness rather than being so at pains to stress the absence of any message in their work that it smacks of Stockholm Syndrome. If a reincarnated Louis Daguerre saw this stuff he’d immediately invent a Time Machine just so he could return to some point prior to 1838 and hurl himself heroically out the same window from which he was otherwise destined to take that first candid street photograph.

Would this strand of street photography currently be so popular unless the huge influx of newcomers hadn’t coincided with 1) the goofiness of social media, 2) the political disengagement of the post-USSR era and 3) the fledgling line-up of In-Public and its association with a humorous, Anglo-Saxon outlook and representing the benchmark for SP collectives? Just a thought.

In case I’m misunderstood as some sort of high-horse killjoy, let me clarify. My sole intention here is to encourage a more mature, socially engaged street photography that manifests at least some recognition of the issues of our era. A noble street photography worthy of respect. Quixotic maybe. But wouldn’t a network of street level watchdogs be something to be proud to be part of ? A sort of global version of the 1930’s ‘Photo League’ . If more of us shot, published and exhibited this type of work the ripple out effect might be of modest but significant worth. More, I suspect than any of the zebra crossings or balloon/head combos that fall into photography’s drip tray. 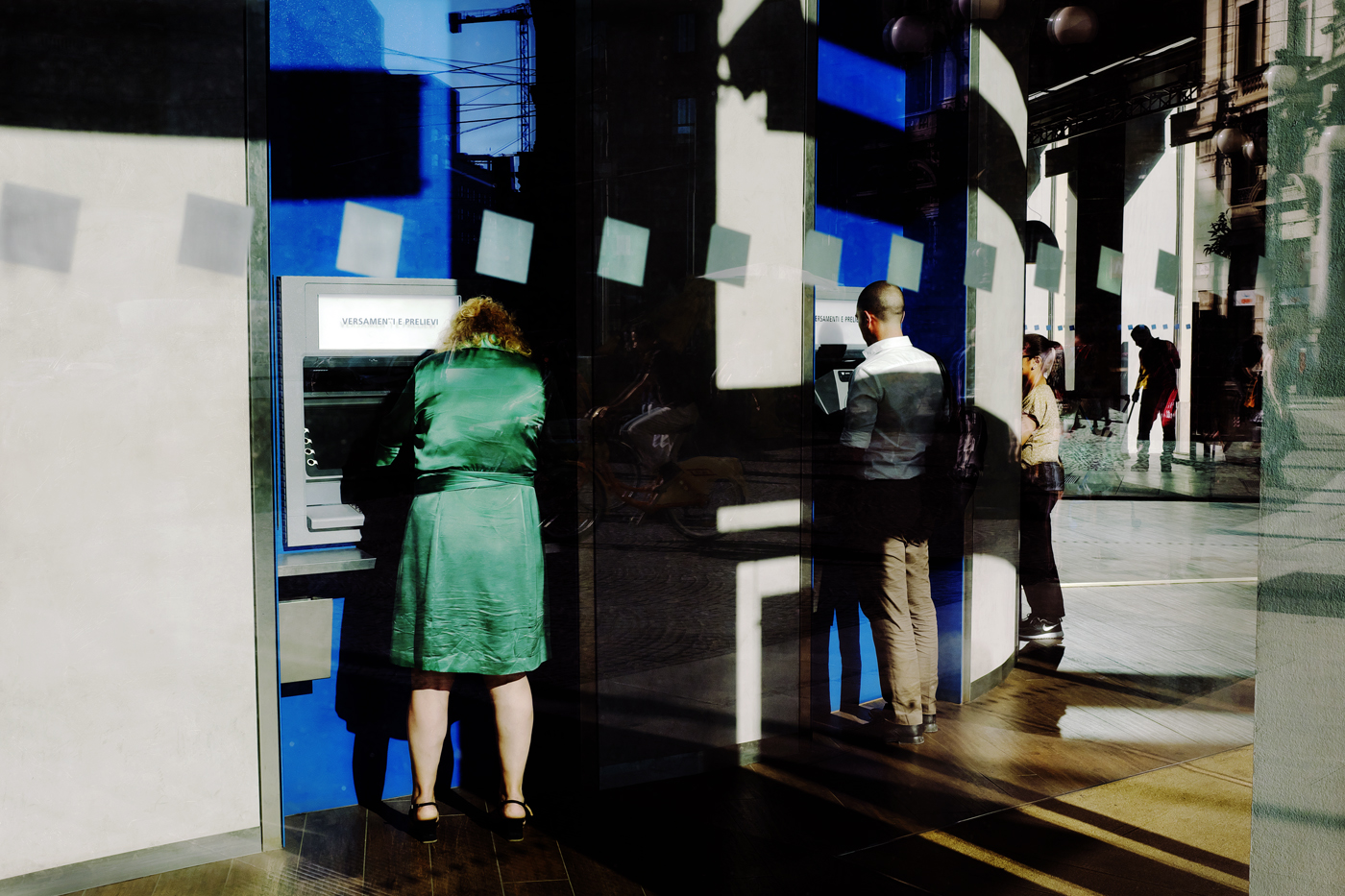 What do you think is the most challenging aspect of street photography?

Vasiliy Lomachenko is probably the best pound-for-pound boxer on the planet. His father made him learn ballet and gymnastics before he was allowed to start boxing. His training routine includes delicate manual dexterity exercises and mathematical calculation. All marshalled to his goal of being a complete artist in the ring. Each bruising blow a brushstroke. By this pugilistic detour I mean I’ve learnt that many of the most important elements that go into strong, rounded photography come from a constellation of sources. That shooting is just the tip of the iceberg. What counts is the person and the life they lead.

My current screenshot is a photograph of Bruce Gilden and myself taken during an otherwise disillusioning event earlier this year. Not my favourite photographer by a stretch but someone I found great company as well as slightly endearing. Although involved in a few skirmishes with other people he was a total gentleman with me. Well, give or take a few dirty jokes. So that screenshot is there as a sort of reminder of a certain spirit. One that says that you can succeed on your own terms as long as you measure success on your own terms too. Above all, that it’s important to be decent, authentic and proud of whatever you do. Even if – or especially as – the end is nigh. 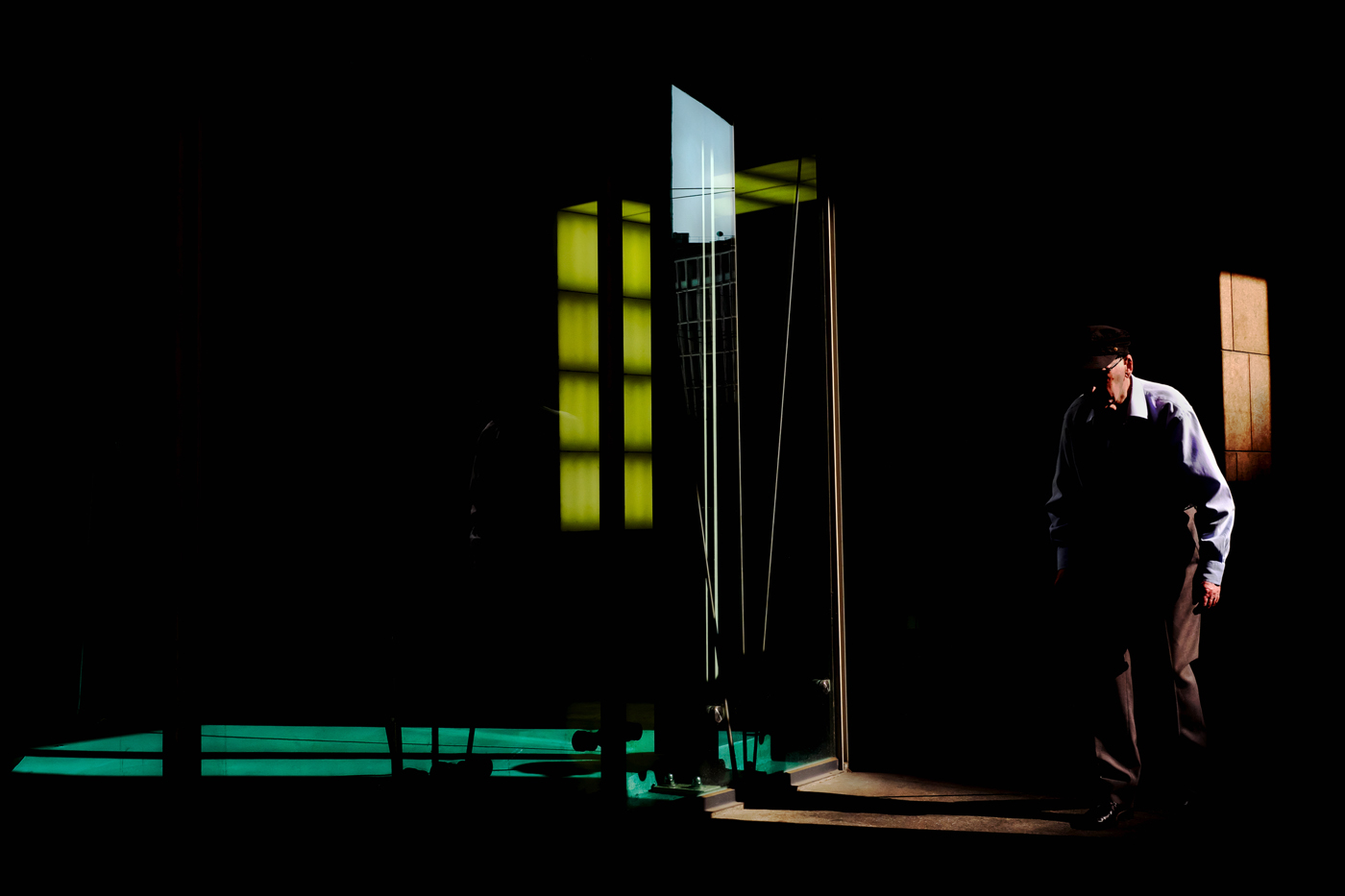 If you’d like to see these photographs in the flesh they’ll be exhibited in October 2018 alongside work by a dozen other street photographers in a central London location. If you come along I’d be dumbfounded if you were disappointed as the previous event was top drawer. If you fancy treating yourself or someone else, all pictures on display will be for sale. Details to be announced shortly via this link.

Editor’s Note: To learn more about Stuart and see more of his work, be sure to visit his website, Instagram feed and Flickr account. Stuart was selected from our Flickr group (Street Photography Magazine), where we regularly choose photographers’ work to be published in our magazine.