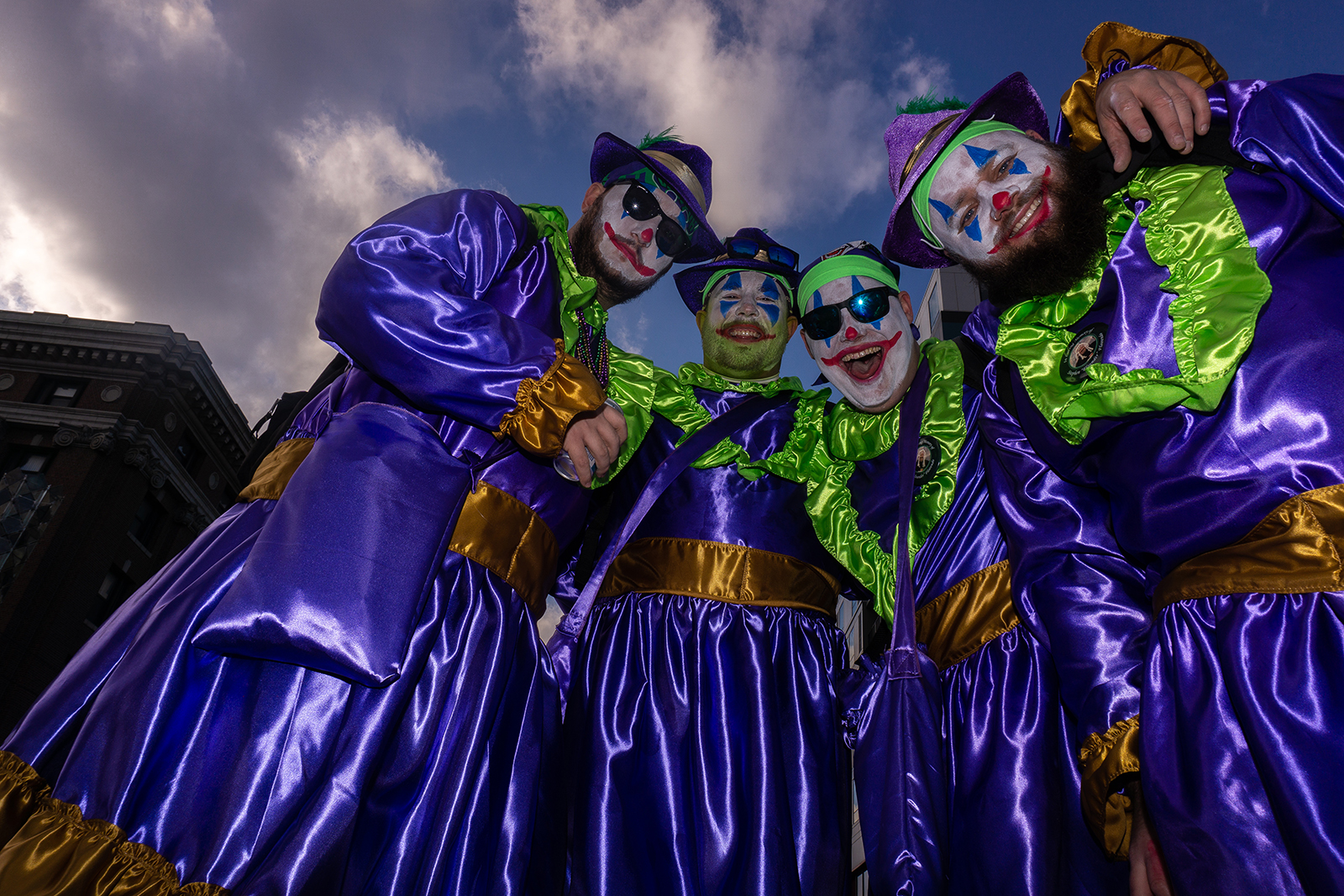 I believe documentary photography is a subjective depiction of the photographer’s world and that’s how I approach my subjects. I use the medium to explore the world around me, placing myself in situations that I may not have without my camera.  It’s a very voyeuristic approach. I almost exclusively shoot wide angle so that I am extremely close to my subjects, almost another element within the photograph just out of the frame. I want to feel like I really experienced what I’m depicting, so photographs from afar don’t work for me.

And so I shot on New Year’s Day, in Philadelphia. 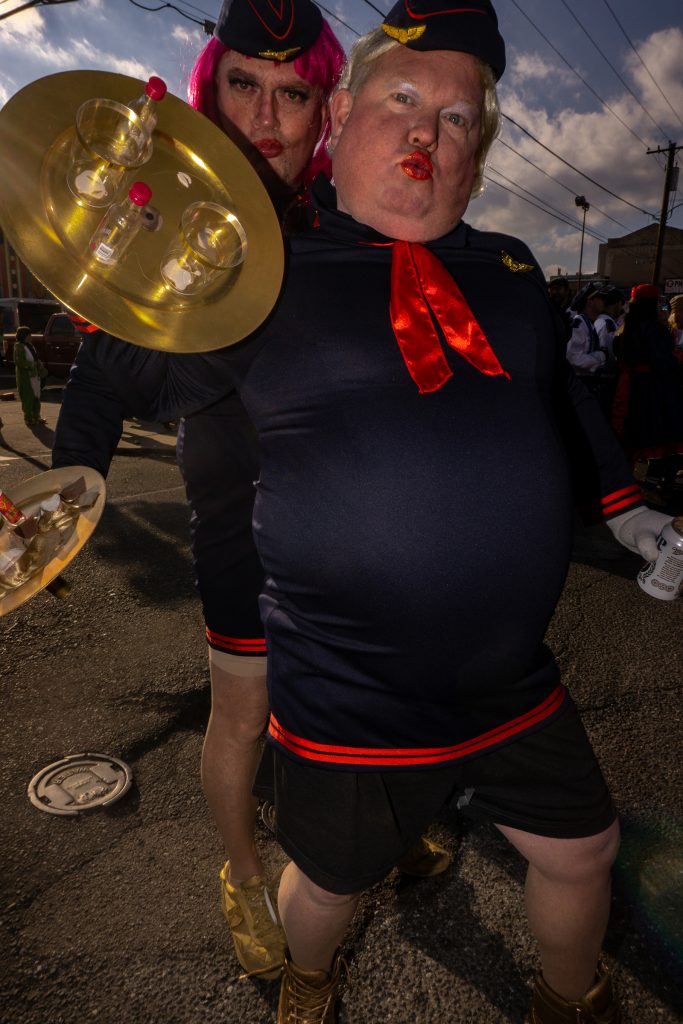 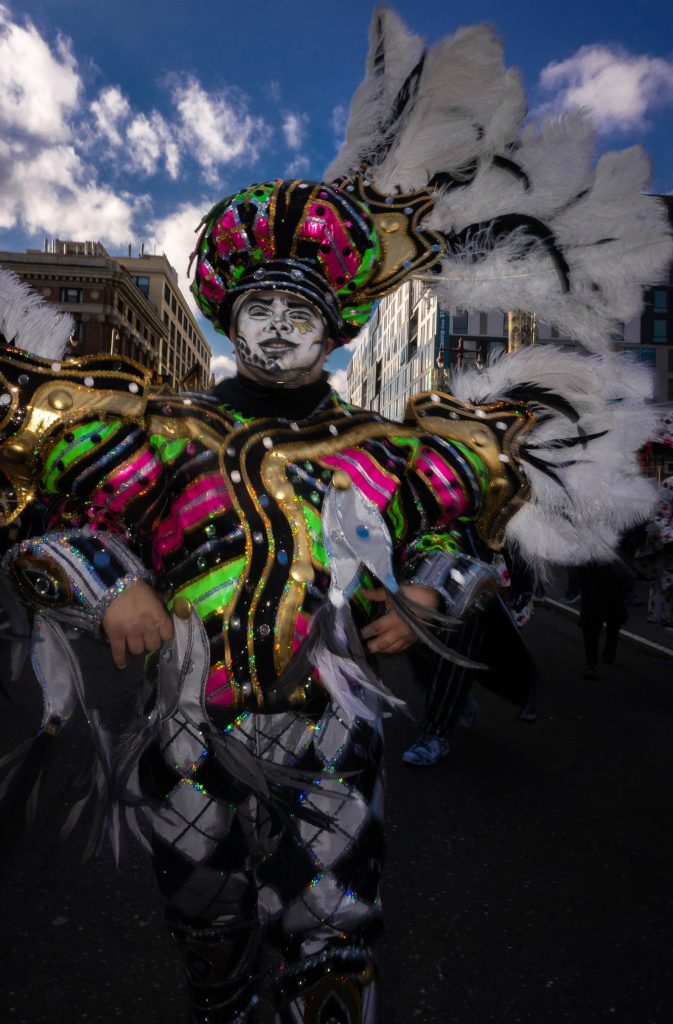 It’s cold out but the Mummers aren’t feeling it. The alcohol is flowing freely and, even though the police are every few feet, no one cares. The Mummers’ poem goes like this:

End of the line

“Here we stand before your door,

As we stood the year before;

Give us whisky, give us gin,

Open the door and let us in.

Or give us something nice and hot 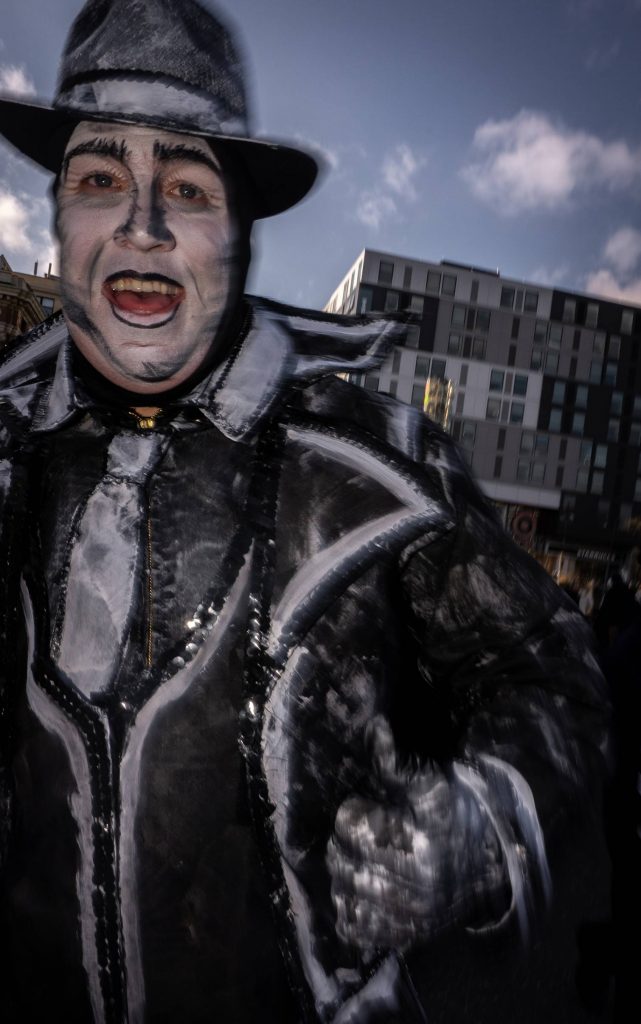 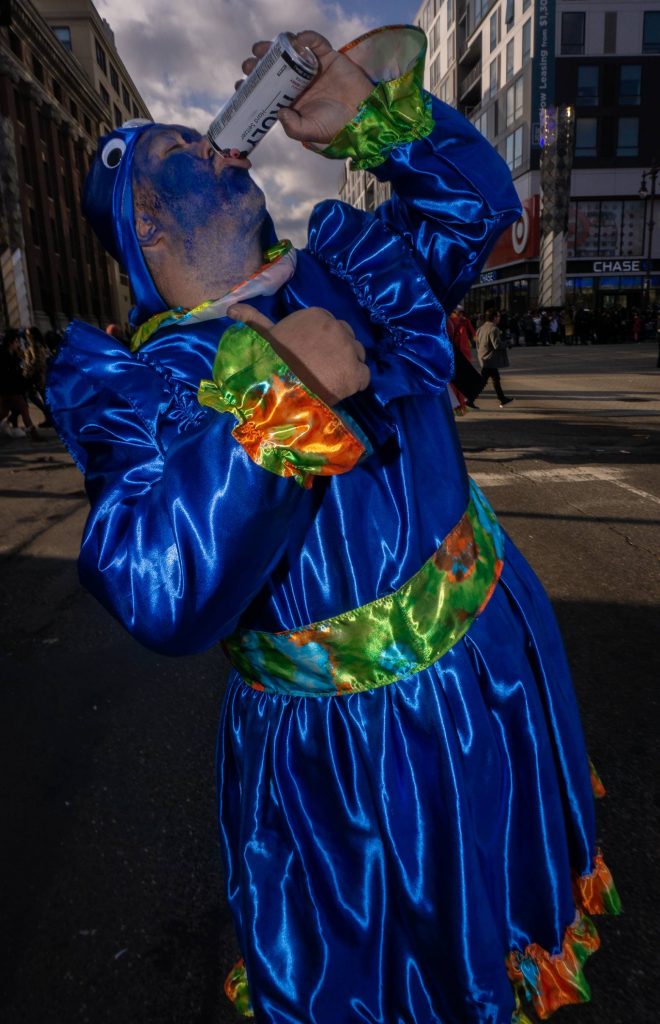 The Philadelphia Mummers Parade takes place each New Year’s Day. The tradition traces back to the 1600’s brought over by immigrants from Britain and Ireland. The earliest clubs were formed in the 1800’s and the first parade was held in 1901. Today, they are five Divisions, Comics (who tend to be the most inebriated), Wendh, Fancies, String Bands and the Fancy Brigades. 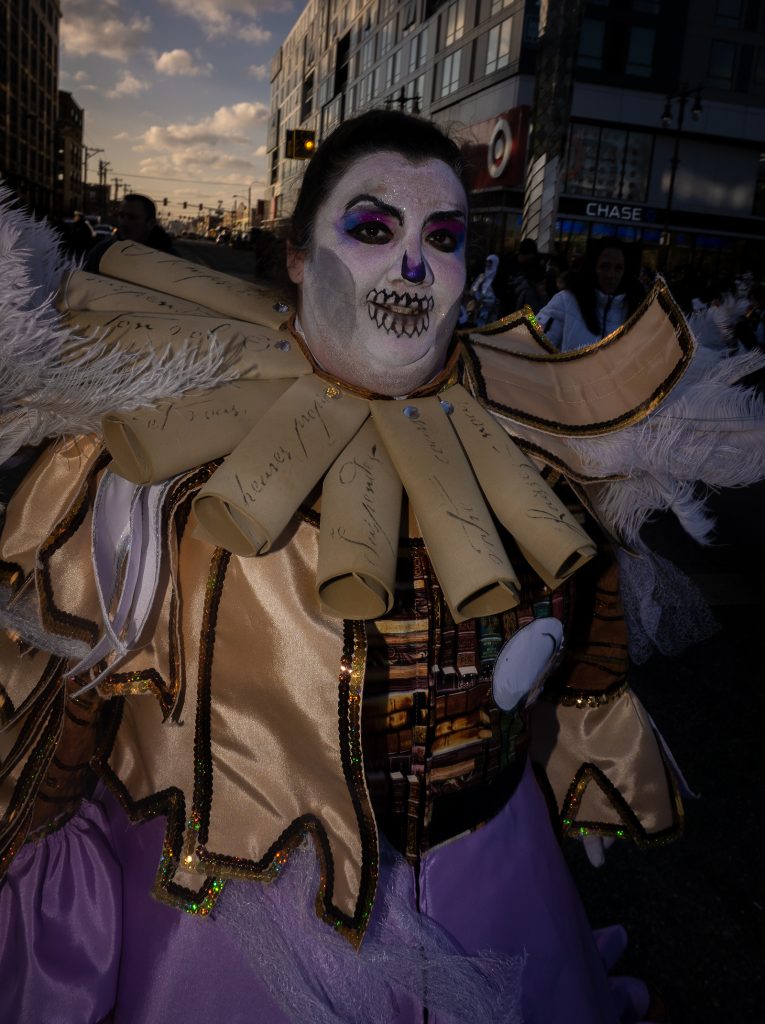 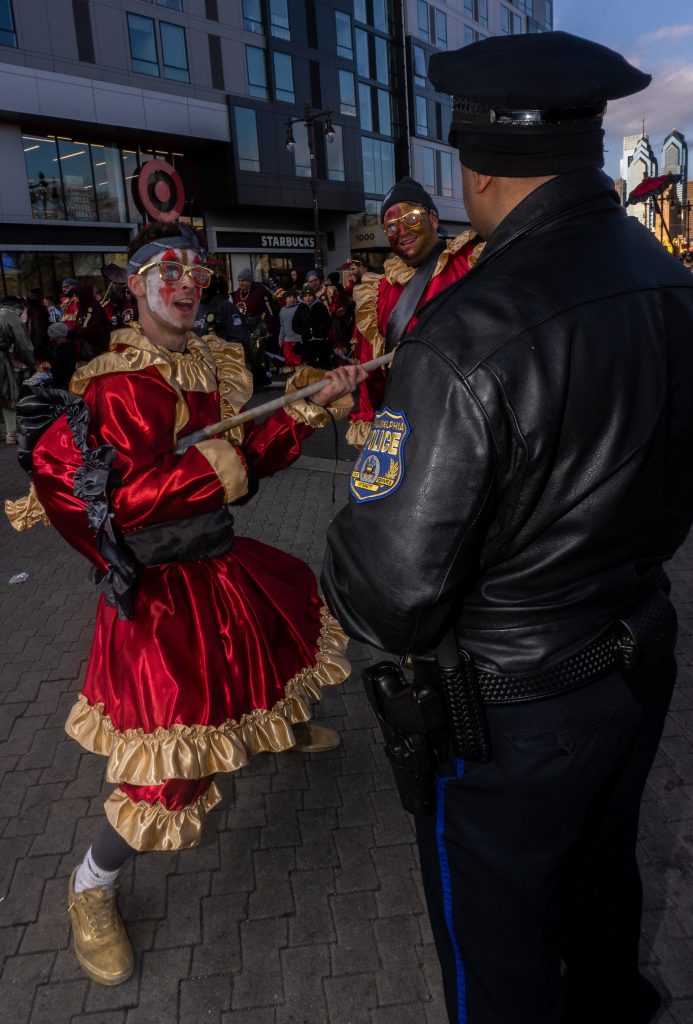 The parade starts at City Hall, ending a mile later at Broad and Washington and that’s where I decided to photograph the revelers. By the time they got to that corner, a lot of my subjects were feeling pretty festive. They start their festivities at the crack of dawn in clubhouses. It’s an odd yet wonderful celebration not without controversy. Some of the brigades’ themes are politically critical of local and national politicians and there has been allegations of racism, misogyny, homophobia and participants in blackface but that is changing as it becomes more inclusive and not just a “two-streeter” event. 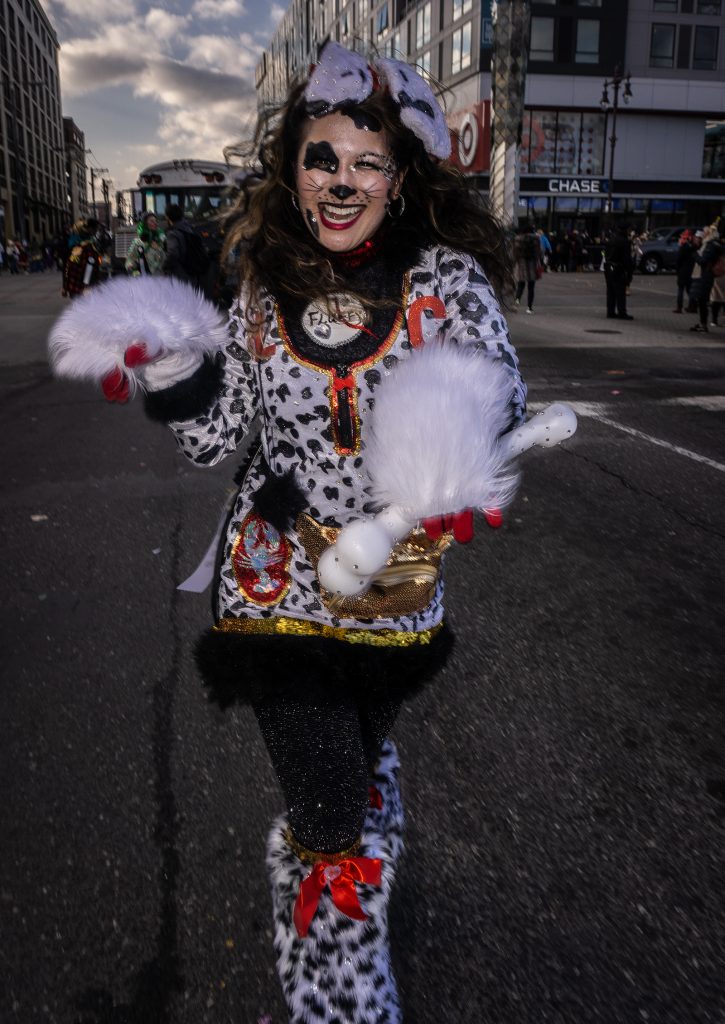 At my corner hundreds of people gather, everyone is friendly – when they aren’t stumbling.