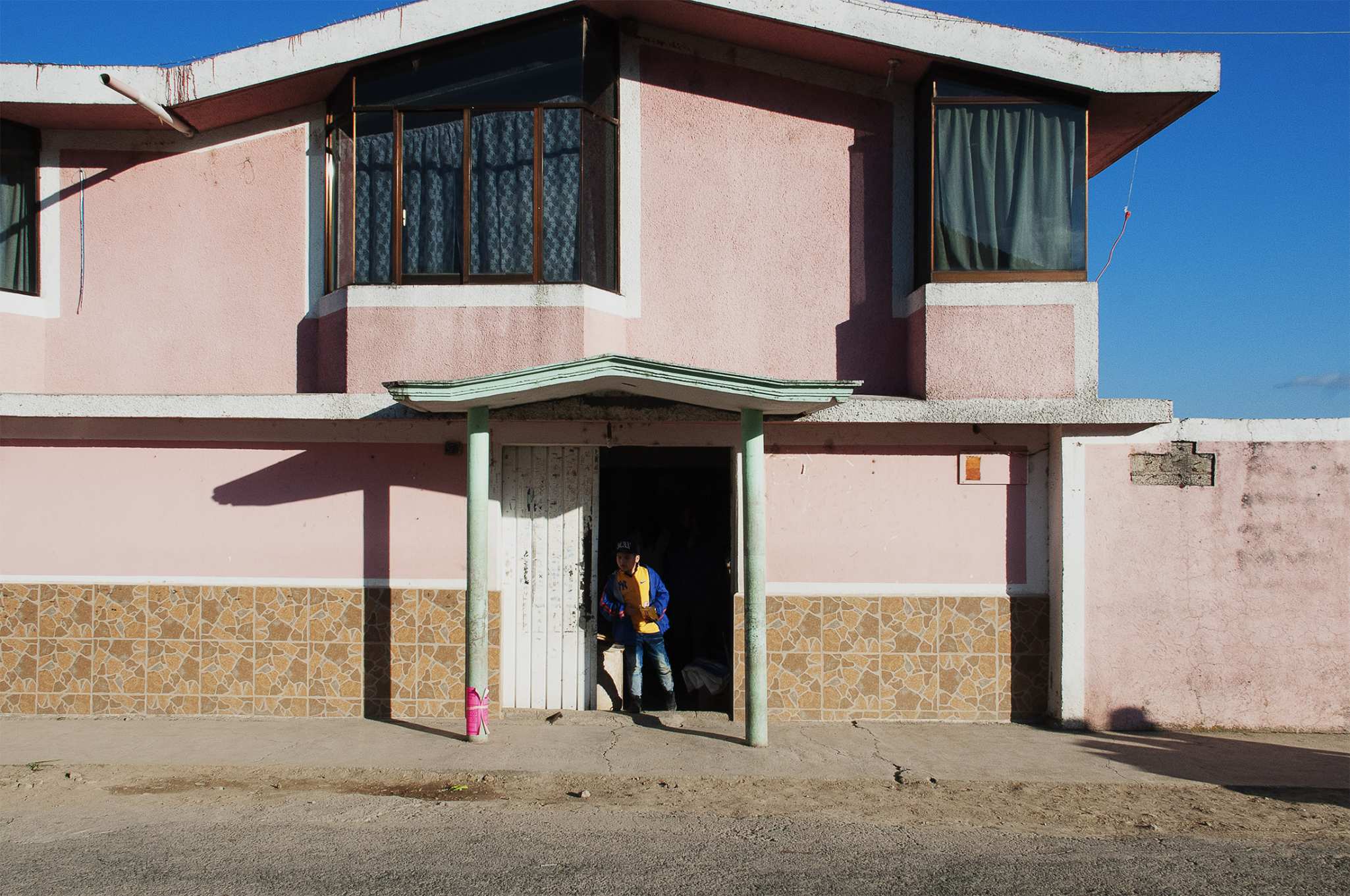 A group of young people with African heritage cross a pedestrian bridge with gestures of restlessness. A white dog, ungainly with a filthy back, crosses a lonely street in an unnamed village. A man stands in what appears to be a public plaza and observes a young woman doing boxing training, and behind them several people form a circle on a low stage. A rooster appears motionless, grounded mid-stride, just as its reddish crest is about to converge with the vermilion dye of fabrics hanging in the background on a clothesline. Four police officers walk, two with grave expressions, two immersed in what looks like a pleasant conversation in the background of the image, while in the forefront the shadows of a group of young people chatting is less easily discernable. An altar with the figure of Christ, sits on the edge of a road under some sort of a bridge. A child, dressed in blue and yellow, peeks curiously from the shadows of a doorway with a pink-painted façade – a sharp contrast with the intense indigo of the sky. An elderly woman, her gray hair done up in plastic curlers, walks down the road and looks into my camera while walking her pet, or what we must infer is her pet, because all we can see is a leash pulled tense by something hidden behind a vehicle.

Eight images. These are photographs that interpret my view of the pandemic according to what I have seen so far and know about the United Mexican States: a little of the capital city and a couple of places around the State of Mexico. They have a common thread – each image is permeated by that which is circumstantial and gives off a sense of uncertainty. Essential to this episodic narrative is that each image gives witness, quietly and without making a spectacle, of the strain that has been felt in the streets of Mexico as a result of the Covid-19 pandemic. They don’t speak to any obvious evil, they show no biological effects, no infected patients lying in hospital beds. Rather these images are a record of the smaller, everyday moments. They are a record of the feeling of impending danger, of what perhaps looms as we walk down the street with our mouths covered and raise our prayers.

These eight images are the product of my travels beginning in December 2020 through various sectors of the city and state of Mexico, with the aim of simply exploring the situation. I was interested to know the condition in which people were in and what their relationship with their environment was now like, and in that way, take measure of the total effect of the virus. Damage is not only done to those who lie in hospital beds. Not to downplay the effect on those who do get infected with SARS-CoV-2 – if you don’t face death, then lung damage and respiratory aftermath will mark you for a long time. But we must acknowledge that the scope of this virus is greater than that – the virus has a potential to pollute that transcends the biological. And it must also be said that this is the responsibility of those who have neither known how to nor wanted to invest in and sustain a quality public health system, let alone adequate health prevention strategies and actions (and to clarify on that point, I do not mean the ordinary citizen, civil society, the people).

My travels resulted in a considerable number of images, but these eight summarize the overreaching feelings: uncertainty, loneliness, hope, faith, risk. They also convey my personal view on this reality, which may explain their rather intrinsic nature.

I felt the same uncertainty and helplessness in those young people walking towards me on the pedestrian bridge in Mexico City as I did when I captured the abandonment of the filthy dog crossing the street of that lonely town of the State of Mexico. In that young woman who boxes and trains her body and spirit in a public plaza in the capital, I discovered the same gallantry and hopeful feeling of the rooster that almost melts its crest into the reddish fabrics that hang in the courtyard of a ranch in Villa de Allende. The restlessness and severity with which the child looked at me from a pink facade in the village of Santa Teresa existed before in the attitude with which the woman walking her dog down the street of a renowned capital neighborhood observed me. Those young men on the bridge may clash with those Chimalhuacan cops in the midst of the unease and suspicion that everyone has inside. That rooster may one day pause and crow at the foot of the altar to Christ where the woman with blue and yellow curlers walks her pampered dog each afternoon and then lights candles and prays, so as to give meaning and strength to her optimism for a better world. And what’s more these eight images may prevent us from losing confidence in what photography can do: it can show us how to rebuild differently and save ourselves from the ordinary absolutism of reality.