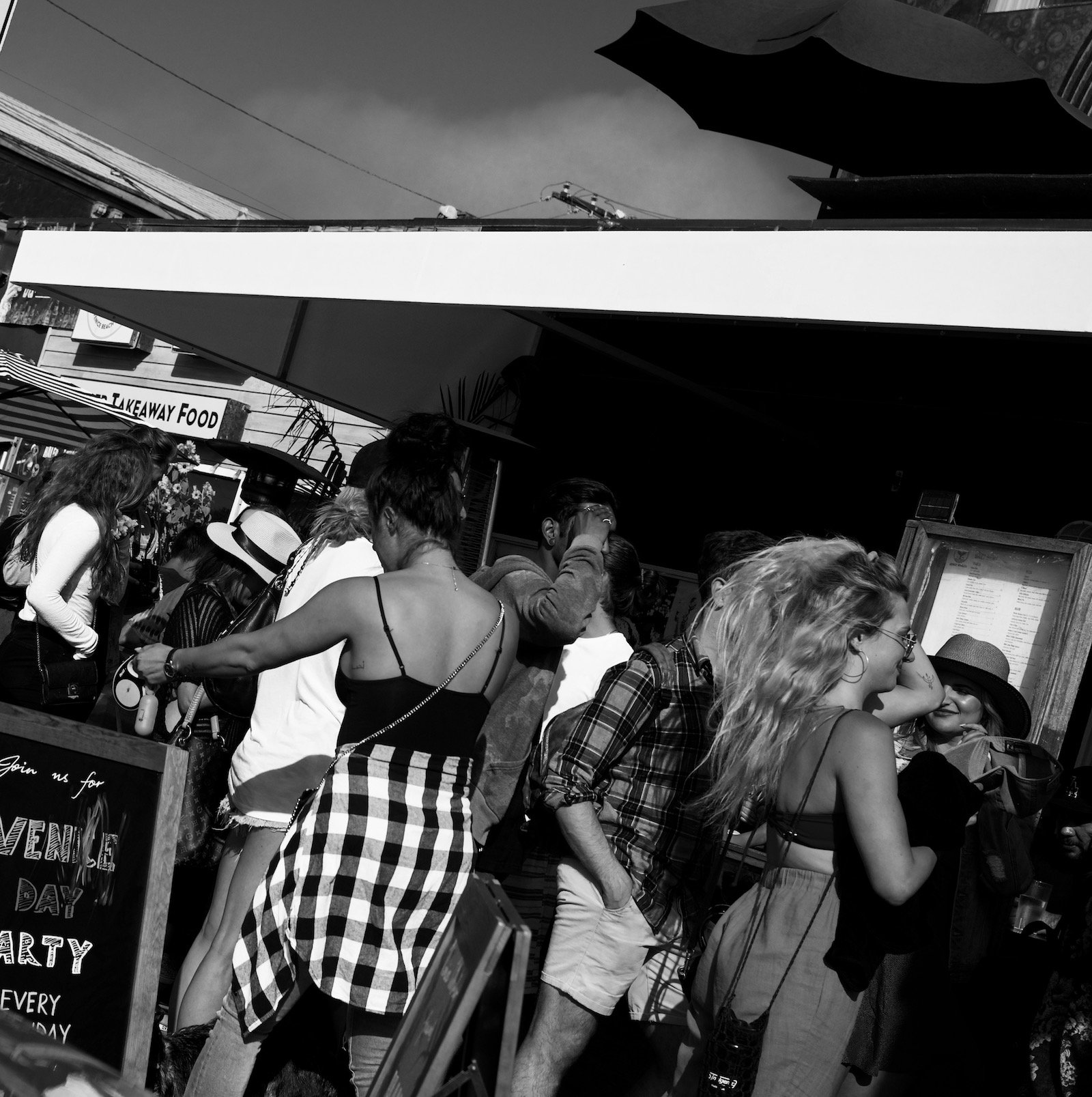 I’m starting to think of the beach towns near my home as a dreamscape. Maybe that comes of shooting for hours in the dazzling light. So that what you think you see changes. Your eyes in a way change. Now when you look at a crowd outside a restaurant towards evening (actually late afternoon) you see excitement mixed with frenzy, pleasantness mixed with something else. Something disorienting. In a dream, things make sense and also don’t. They have a logic but also are often cockeyed. I like this strange, persistent mixture. The above shot is that for me—a kind of dreamscape. This has been a new way of shooting for me, with odd camera settings (mostly a high ISO in spite of the bright light, fast shutter speeds). If you shoot a certain way you can get a bold, strange image, where (as here) the daytime sky is dark, the world tilts as if it’s about to fall off its axis.

Maybe I’m indulging a weird photographic taste. But I can’t help it. It intrigues me. Over a period of time I kept shooting this way. Looking for the dreamscape image. This, I have come to feel, can tell you more than a “normal” seeming image. This technique has not always worked. And when it does work it perhaps doesn’t produce great images. I don’t know. But in their strangeness these images interest me. Take a photo I shot of Venice Beach promenade. A crowd gathering to watch street performers. In the dazzling beach light crowds gather like this all the time—half mesmerized by the performers, probably by the beach light too. 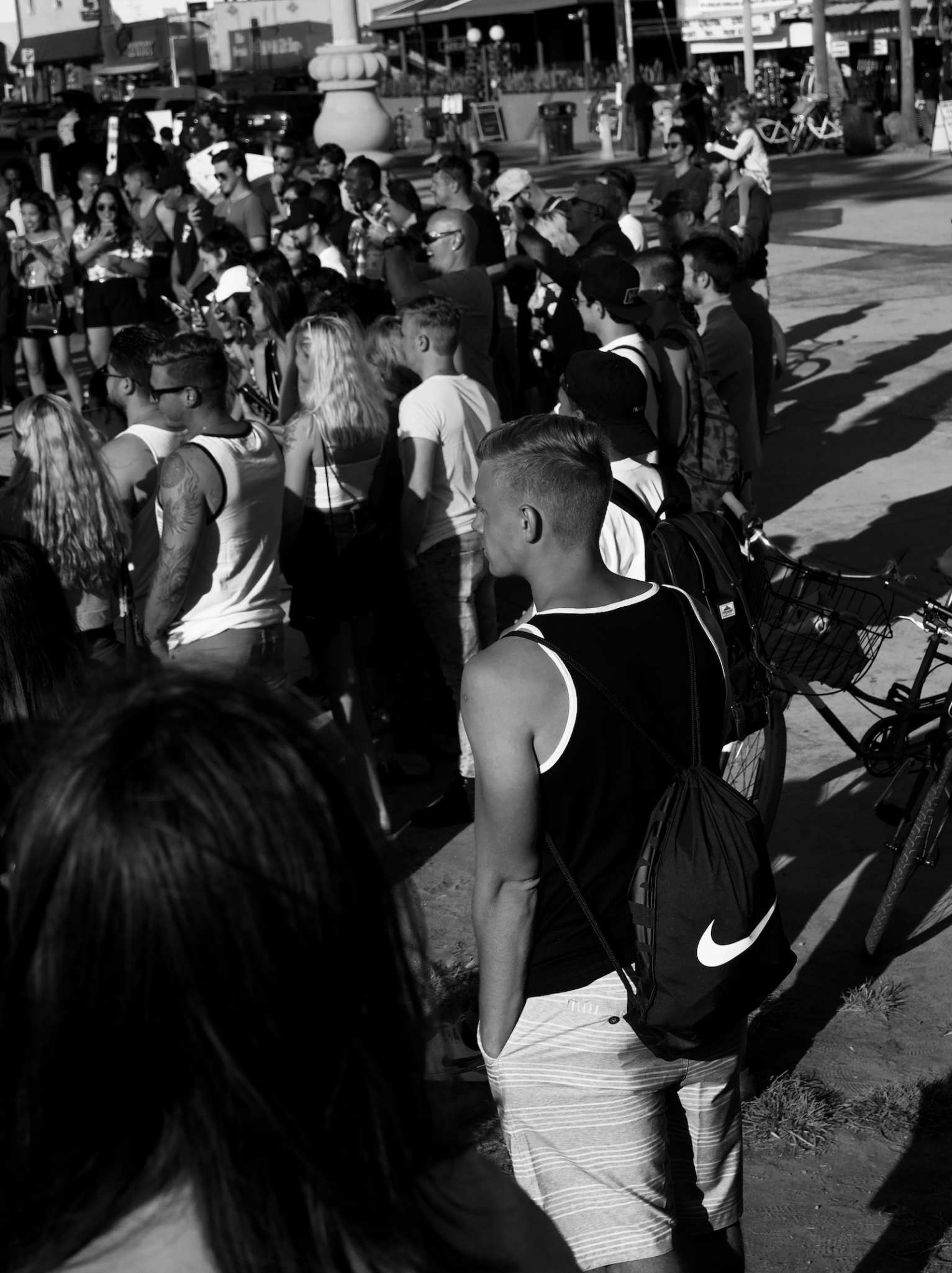 You can say the above image is dull and ordinary—the backs of people watching street performers you can’t see. But to me it’s again a small, fascinating dreamscape. One figure—the man in a black tee shirt—is sharp. Everything else crowded in the top left corner is slightly out of focus. It’s as if (to me) some weird energy is pulling everything up and out, away from the sharply focused man. The shot seems bold to me at the same time the image seems to be disappearing. It’s solid and indistinct. Like a dream. Why this interests me in this particular instance is I know how mesmerized a crowd can be on the promenade. How they can lose themselves in what they’re witnessing. Very much in the way the image loses itself in indistinctness.

So, this is what I’ve been playing around with, in one way or another. Trying to shoot the promenades and the beach towns in this odd way. The simplest seeming, dull moments—like a man in a white hat by a car looking down—can take on a different meaning. That strange, maybe cryptic dream meaning. A simple concrete wall on the beach can seem to stretch out the whole horizon. Again, under a dark daytime sky. Or things can turn downright ominous, if you look at the promenade a bit later in the day (though the sun is still strong). So that you almost get a nightmarish image because of its darkness—dark sky, dark palm trees and people, a white poster flashing, a white flag stuck up on a stick. It’s hard to say where all this will lead. But it’s fascinating me right now. Giving me a whole new way to shoot the dazzling California light. 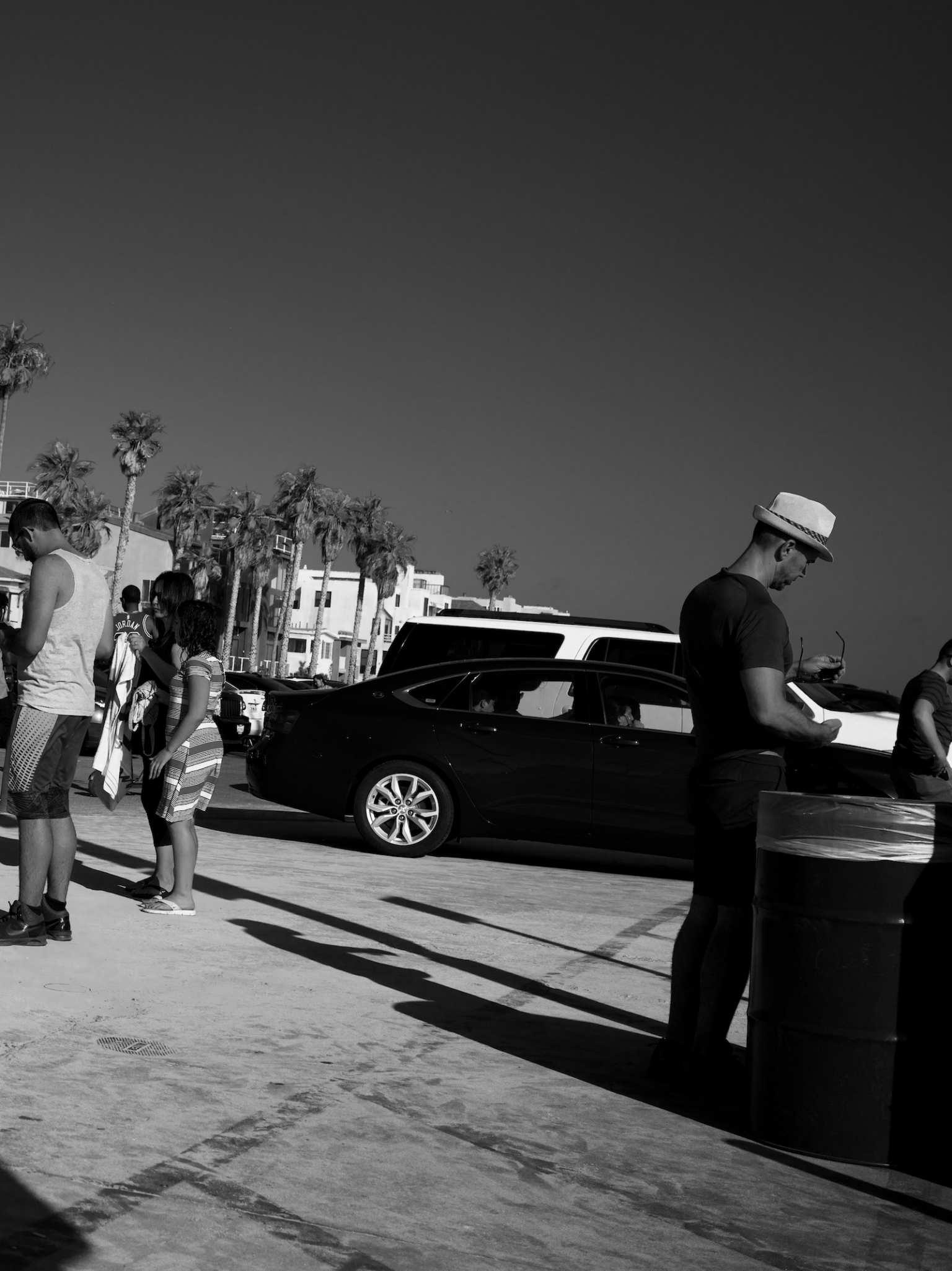 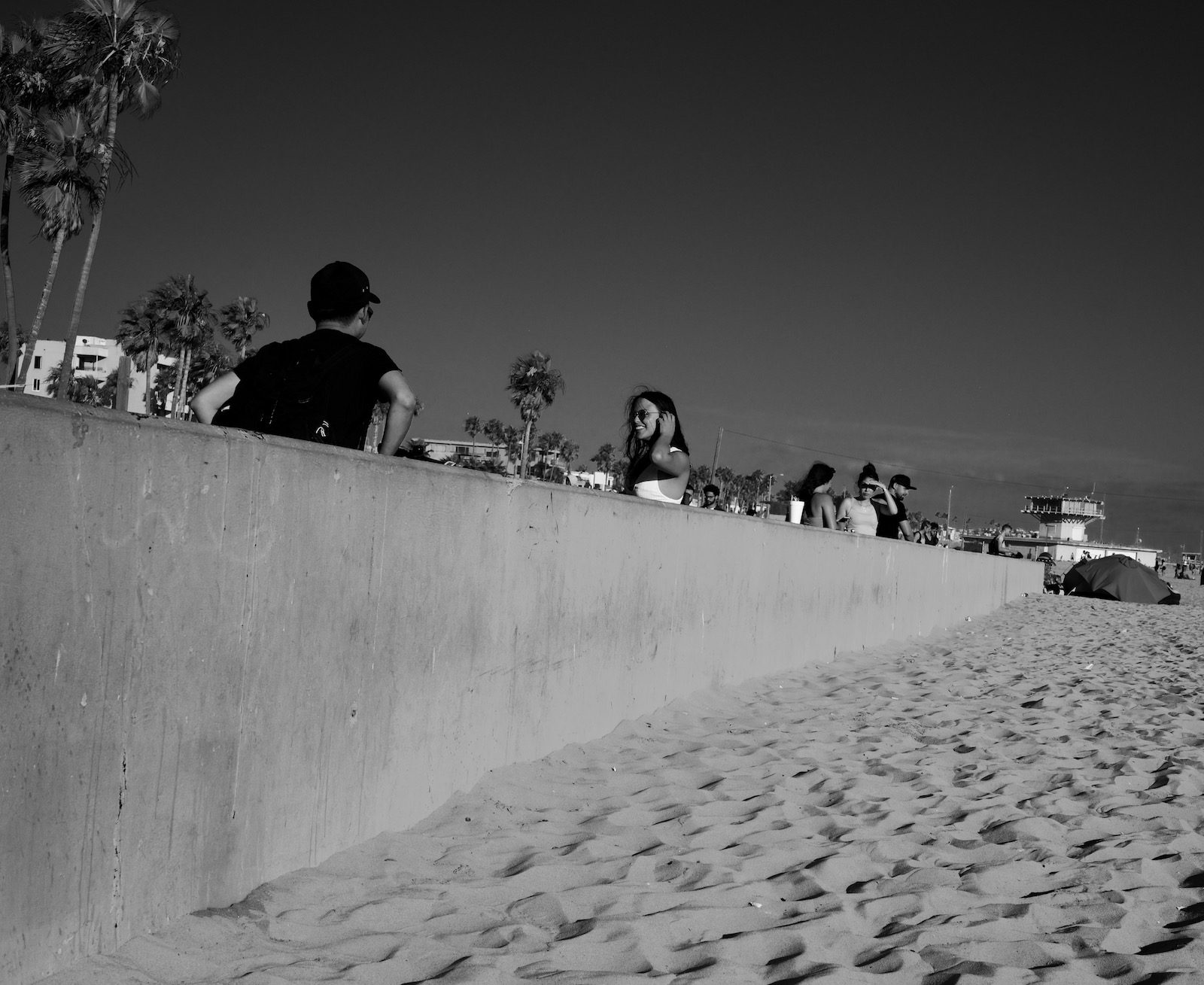 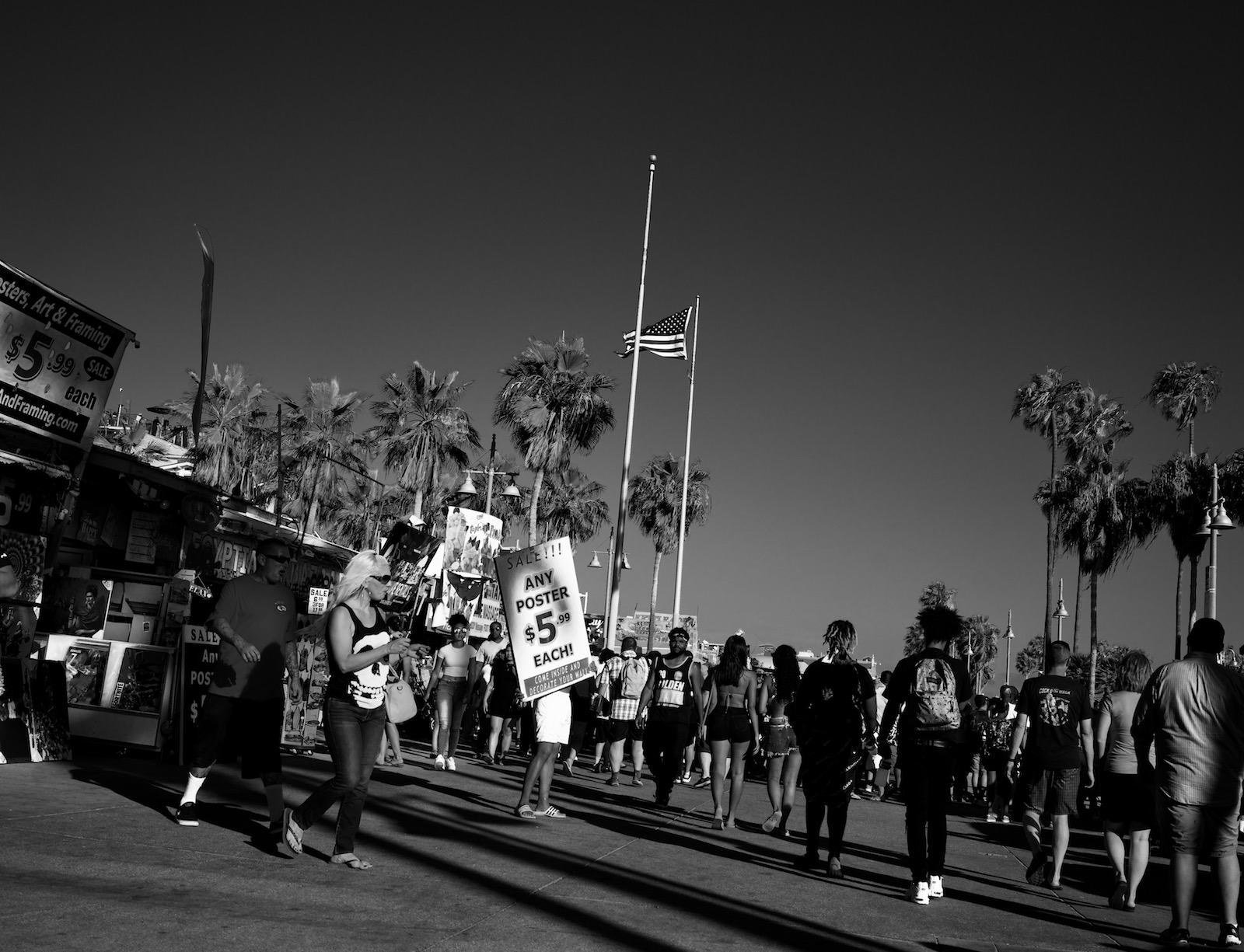