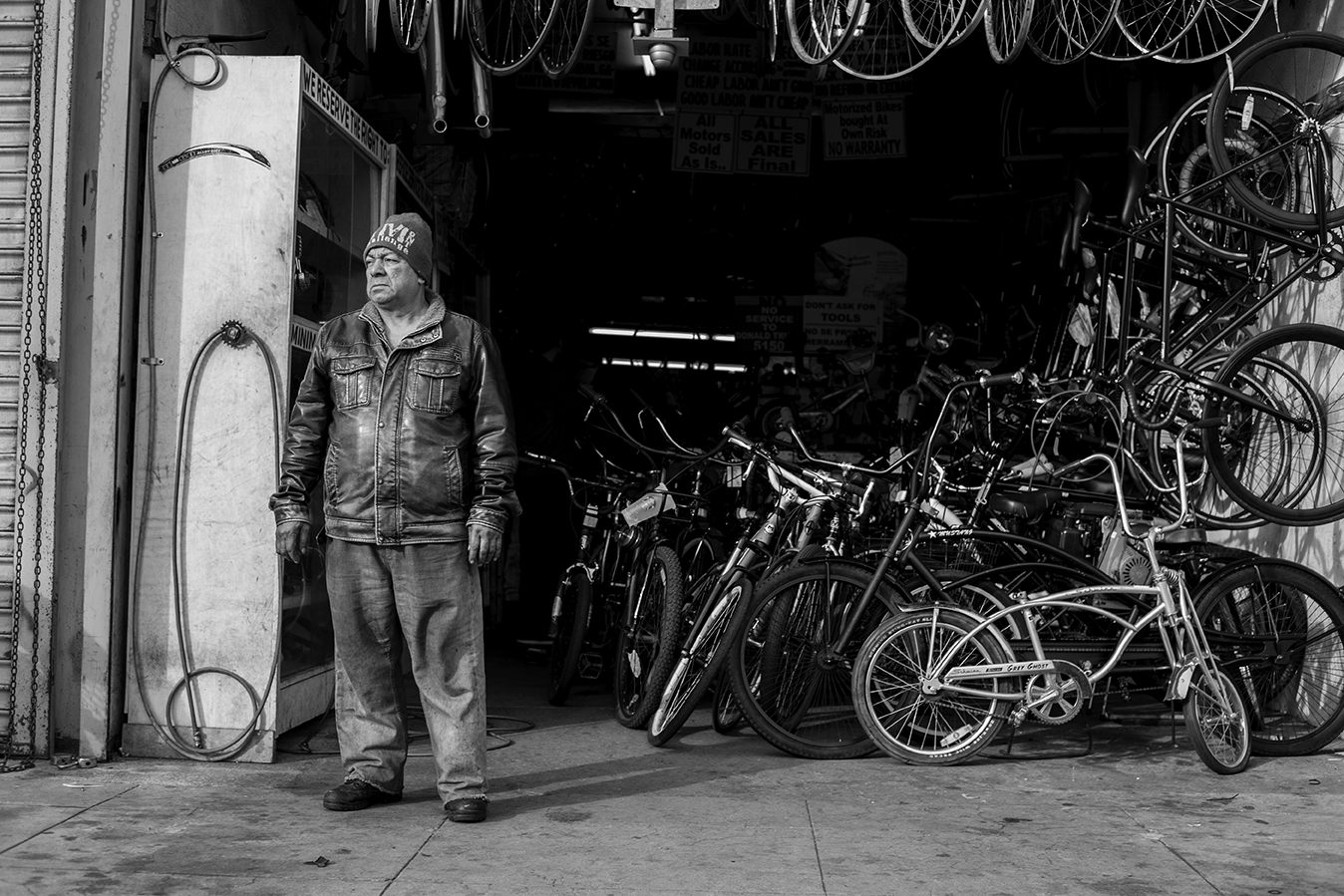 As a street photographer, and a native Californian, I have spent the past several years attempting to document different areas and cultures of the LA Basin. Documenting the people, the habits, and the fashion of different streets and neighborhoods. Motivated mostly, out of nothing more than my own selfish curiosity. As I was wrapping up a two year photo essay on Hollywood Boulevard, I had a chance encounter with a motorized bike crew from South LA that would spark new relationships and occupy the next several years of my life. An encounter that would lead me to see the bonding power of shared interests and, and signs of hope that our racial divides may not always be as wide as the media often likes to portray.

Before we go any further, I must point out, if you have not already noticed, that I am a photographer first, and a writer third. I went to art school, I am clumsy with words, but hopefully I can compensate for that with a little sincerity.

So this encounter – It was a group of 20 or so, mostly grown men, riding tricked out motorized bicycles down the middle of the boulevard. I was first attracted to the deafening whine of the 20 small 2 stroke engines, but as I ran across the street to get a closer look, I saw the bikes. Wow. Many had stretched frames and forks, custom paint jobs, and were chromed-out end to end. They were reminiscent of the bikes from the chopper scene of the “Easy Rider” era. The other half of the bikes, equally cool, resembled something that came out of the Mad Max movie. Rusted out, with mixed metals, hand made, and hobbled together at times with bailing wire. I wanted one! And then there were the riders. Grown men, ages 30 to over 50, dressed in matching black leather jackets, looking pretty badass…and riding bicycles. It felt James Dean cool, and Pee Wee Herman wacky – both at the same time. I asked if I could take their pictures, we struck up a conversation, and they invited me down to their clubhouse to shoot and/or ride with them. 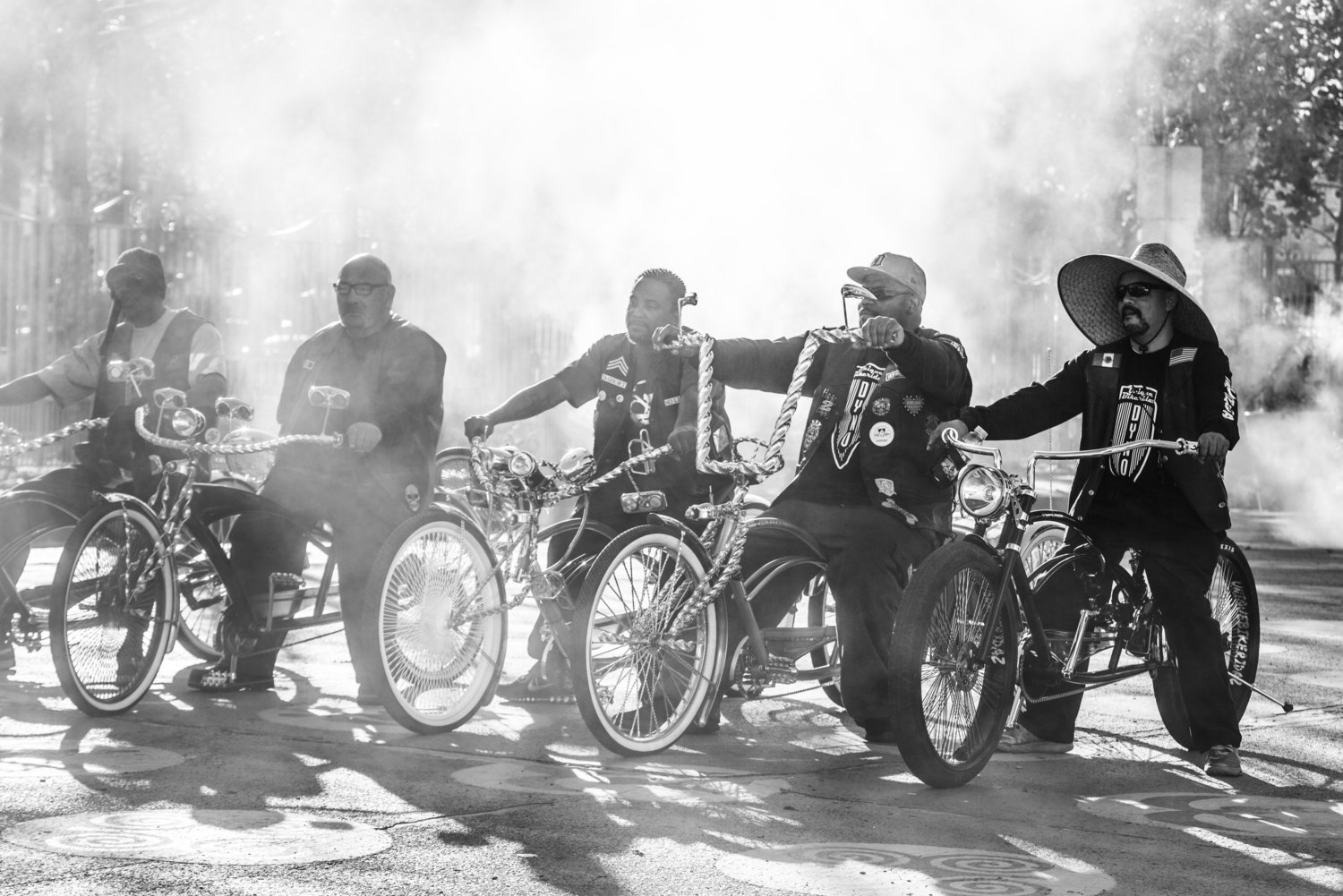 The clubhouse was located, coincidently, just a few blocks from where Nipsey Hussle was recently murdered. It felt like a small, somewhat abandoned pool hall, with a makeshift kitchen in the back.
It served as a meeting place where they would gather every Sunday to hang out, eat some food, listen to music, maybe even get a haircut, and then ride out to a different location each week. These rides where often as far away as 40 miles, and might include Venice Beach, Long Beach, Knott’s Berry Farm, and Hollywood Blvd.

My first shoot at the clubhouse was rather humorous (at least to me). They had put the word out that I was coming, and everybody and their sister showed up to be photographed. They seemed quite eager to pose for the camera, and I was quite overwhelmed. They showed up with their motorized bikes, their motorcycles, their lower riders, 4×4 trucks, wives, sisters, and kids, all wanting to be photographed! And, it was blistering hot that day. So I found myself getting into high school yearbook mode, shuffling everyone through a photo assembly line as fast as I could, so I could get back home and out of the heat. (I am a wussy-boy in hot weather heat.) Needless to say my photos from that day were not great, but the crew seemed pleased, and most importantly, I was hooked. They all were so gracious, and treated me like I was family. I knew I had to keep this going and try to capture this truly unique hobby. 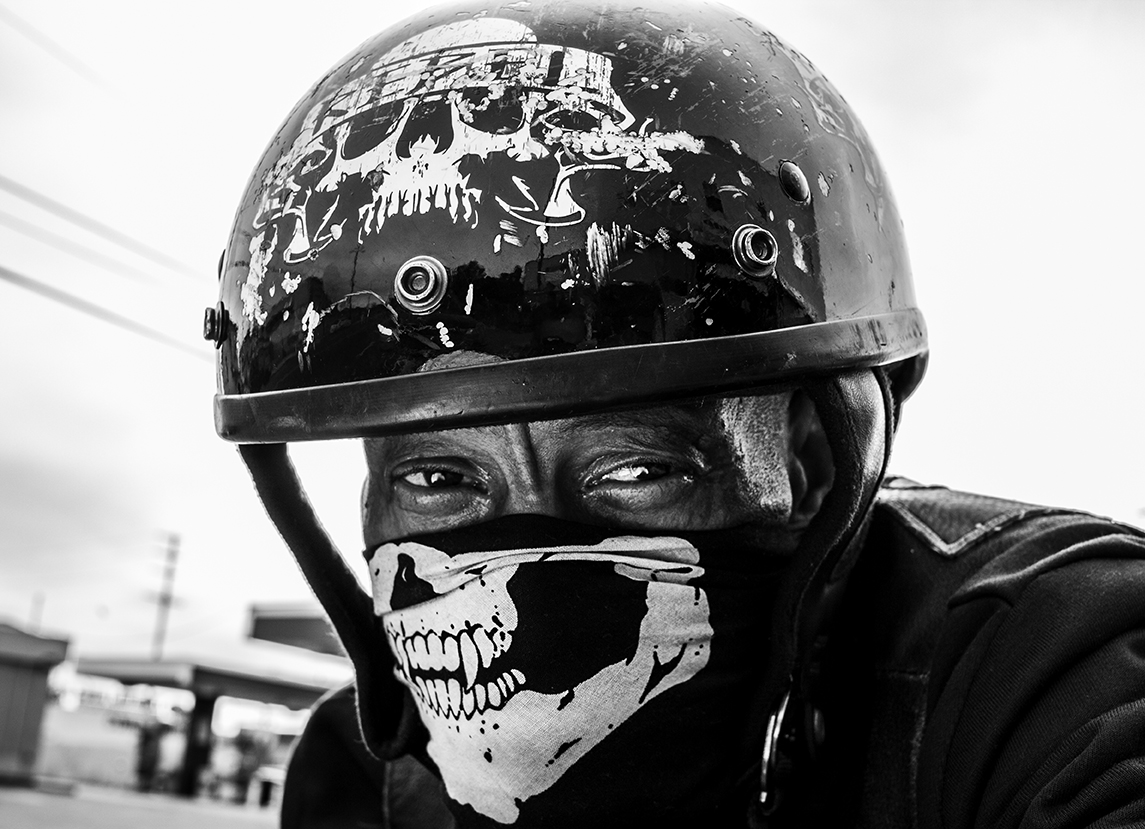 Almost a year later I organized the second visit, and this time I came prepared to shoot everybody. I brought my fellow photographer friends Noah Schutz and Jeremy Danger, plus some extra equipment, and I shot and shot while my buddies interviewed them, and rolled some video. I repeated these visits on my own over the next year, riding with them, visiting their homes, the garages where they build the bikes, and even hanging on the boulevard with the lowriders.

As I hung out and got to know everybody, I quickly came to realize that in spite of their ages, and the sometimes-aforementioned “Pee Wee Herman” factor, these guys were true daredevils. They weaved in and out of LA. traffic on these bikes, and even took them (illegally) onto the freeway at speeds up to 70mph. Consequently, most of them were beat up pretty good. Many had permanent limps, scars, and various injuries. One guy who I became close friends with, was in a horrible accident that left him in a coma for a month. He lost the primary use of his right hand, his family was stuck in a homeless shelter for a short time, yet he still rides. These guys really were badass. 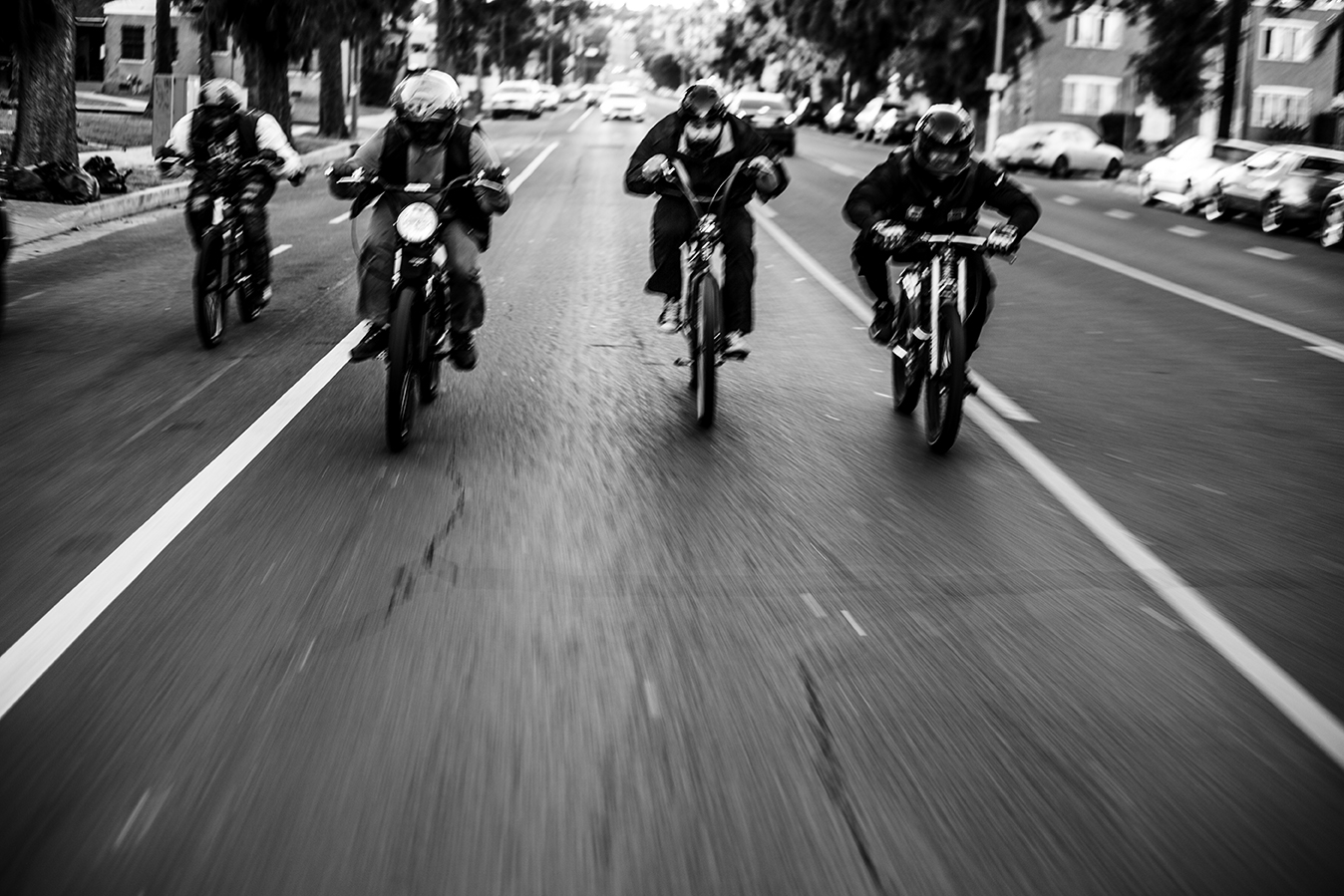 It was not just about the riding either. It was also about the designing and building of the bikes. I think that is what attracted me to this crew the most. These guys are artists, building these bikes sometimes out of found junk, other times with custom designed and fabricated parts. All on their own, to finish with these beautiful rolling sculptures. When I say “all on their own” I mean as a crew. There are really no companies or even shops making these bikes. They pretty much have to make it all on their own – which I think is the true fun in it all. You can’t do that with cars or motorcycles, they are far too complex. But with bikes, you can build it all yourself from beginning to end. That’s where that dichotomy of James Dean cool, and Pee Wee Herman quirky meet. Yeah, it’s a little odd seeing grown men on these bicycles, but considering the danger and the awesome designs, it is also just plain badass. 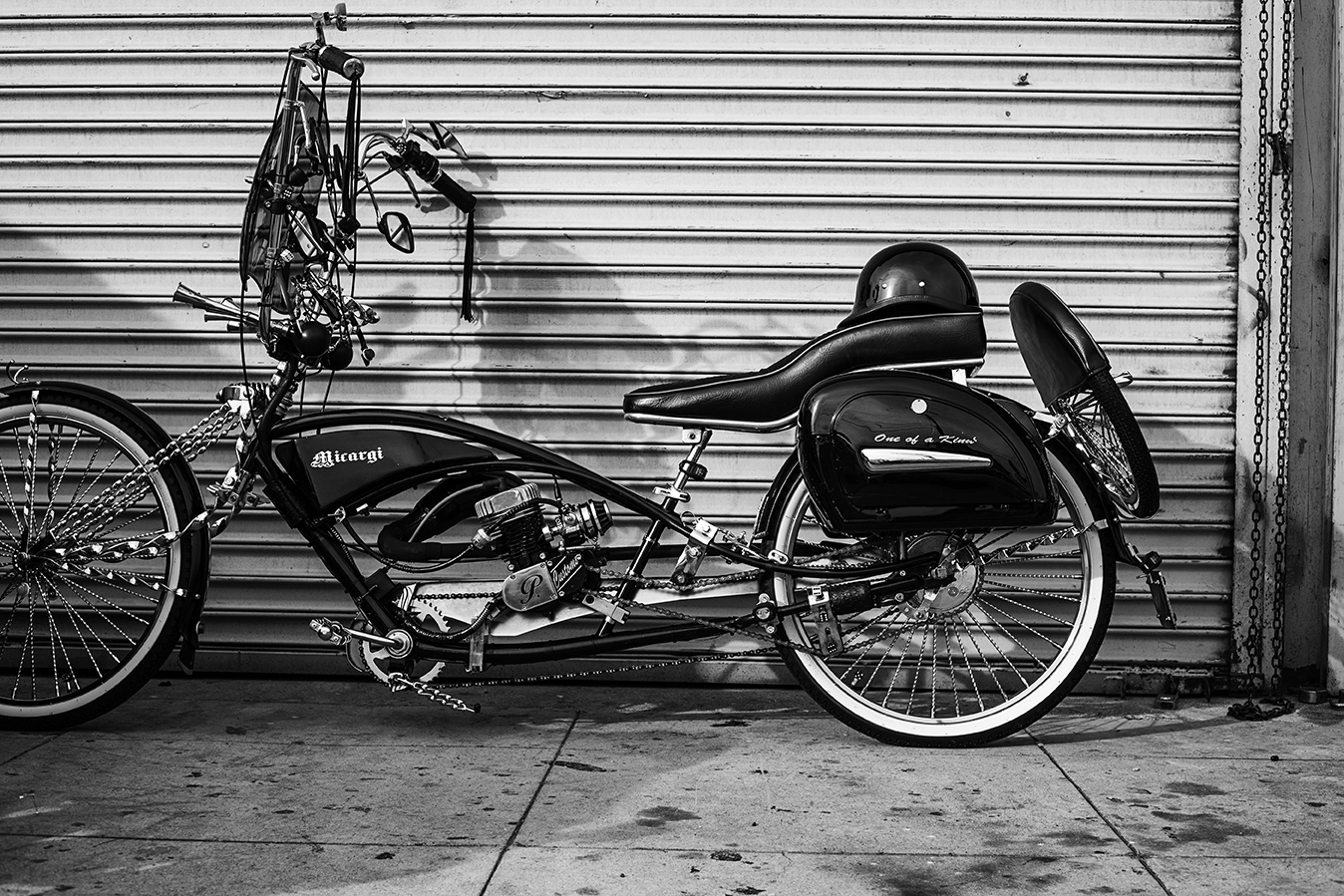 I was also intrigued by the sharing of ideas and cooperation of everyone. One guy in a garage might invent a new part that helps the bikes go faster, while another guy across town, in another garage, might invent a cool looking gas tank – and they readily shared and passed this knowledge around constantly. There was minimal competition, especially within each crew, but also outside the crew as well. Everybody rises together. If one guy has an extraordinary bike, then they all take pride in it, and then help each other to step up to that level.

They walked me through the whole evolution of the process, explaining who invented what, who designed what, and where they are headed. (Custom electric bikes, that’s where.) The reach of these clubs also went far beyond their immediate neighborhoods and communities. In addition to creating custom bikes for such people as Snoop Dogg and Ice T, they also drew members from as far away as 40 miles, and often collaborated with other builders in other communities with zero regard for the color of anyone’s skin. In an effort to expand the photo series I once traveled out to Perris, California to shoot a motorized bike race, attended by about 90% Caucasian men, and was surprised to learn that nearly all of them had heard of and had good things to say about my new friends in South Los Angeles. This is a rather dumb hobby bringing people together from all walks of life who would not otherwise normally cross paths, let alone be friends.

As a dumb, squeaky white boy originally from the suburbs, I was also caught off guard by all the street names. I quickly learned, from day one, that in the African American community it is very common to be given a nickname – at any point in life, for any reason at all, and these new nicknames will typically stay with you forever. Often becoming more important to you than your birth name. They were pretty cool names too. I often secretly hoped they would give me a name, but also knew I was too afriad to find out what they really thought of me. Over the course of a year I met; Snowman, Hazard, Cadillac, Ken Bone, Stixx, Mr. P, J Boy, Bright Eyes, D Low, Skittles, D Short, Moni Love, D Money, Mr G, Mama Dee, Eclipse, Top Model, Lil’ Top Model, Sarge, Tunez, King Lou, Slim, Handles, Specs, MC Romeo, Boulevard Fly, and Gunslinger. All of whom could not have been any nicer to me. 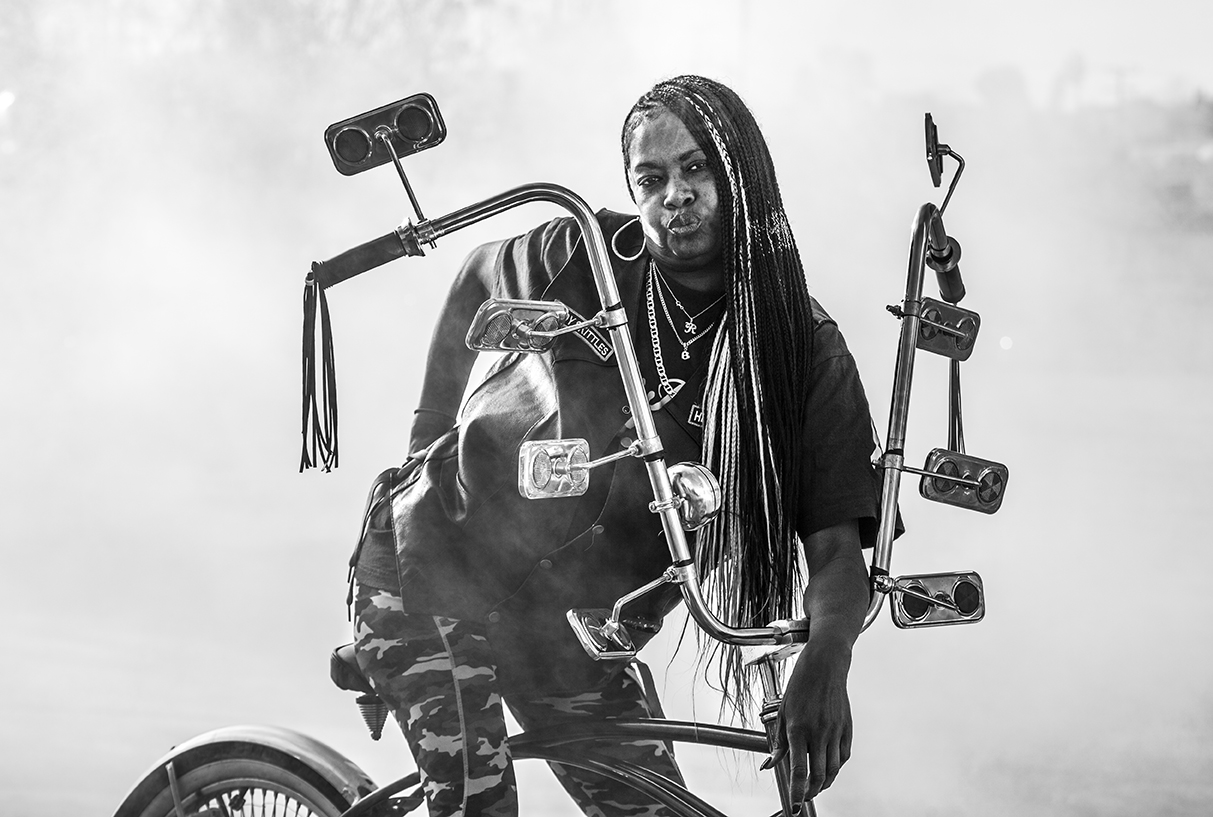 That’s the thing that maybe surprised me the most, (not that I was expecting bad things, but I am sure that my expectations were unconsciously tainted by stereotypes and preconceived notions) was that they were so kind and accepting of me. I never once felt out of place, or like the odd man out. One evening I even rode down to Broadway with them where they often hang with the lowriders. It was packed with cars and people, and a pretty tough looking crowd. Being the one and only Caucasian for miles around, my first thought was “oops, I am in way over my head here”. Maybe it was because I had a big camera around my neck, or maybe my crew was watching out for me and I was too dumb to notice, but even in that situation, I never felt like I even got a “look” from anyone.

I came to find out that these new friends of mine were actually big teddy bears (though I would never say that to their faces) Many were married with kids, all had good jobs, some regularly attended church, and as a club they consistently lead and participated in community projects. They also seemed to be 100% colorblind and accepting of anyone. The primary club I followed was the DTM Motorized Bike Club. The “DTM” stands for “Doing The Most”, which I took to imply “doing the most in the community”. 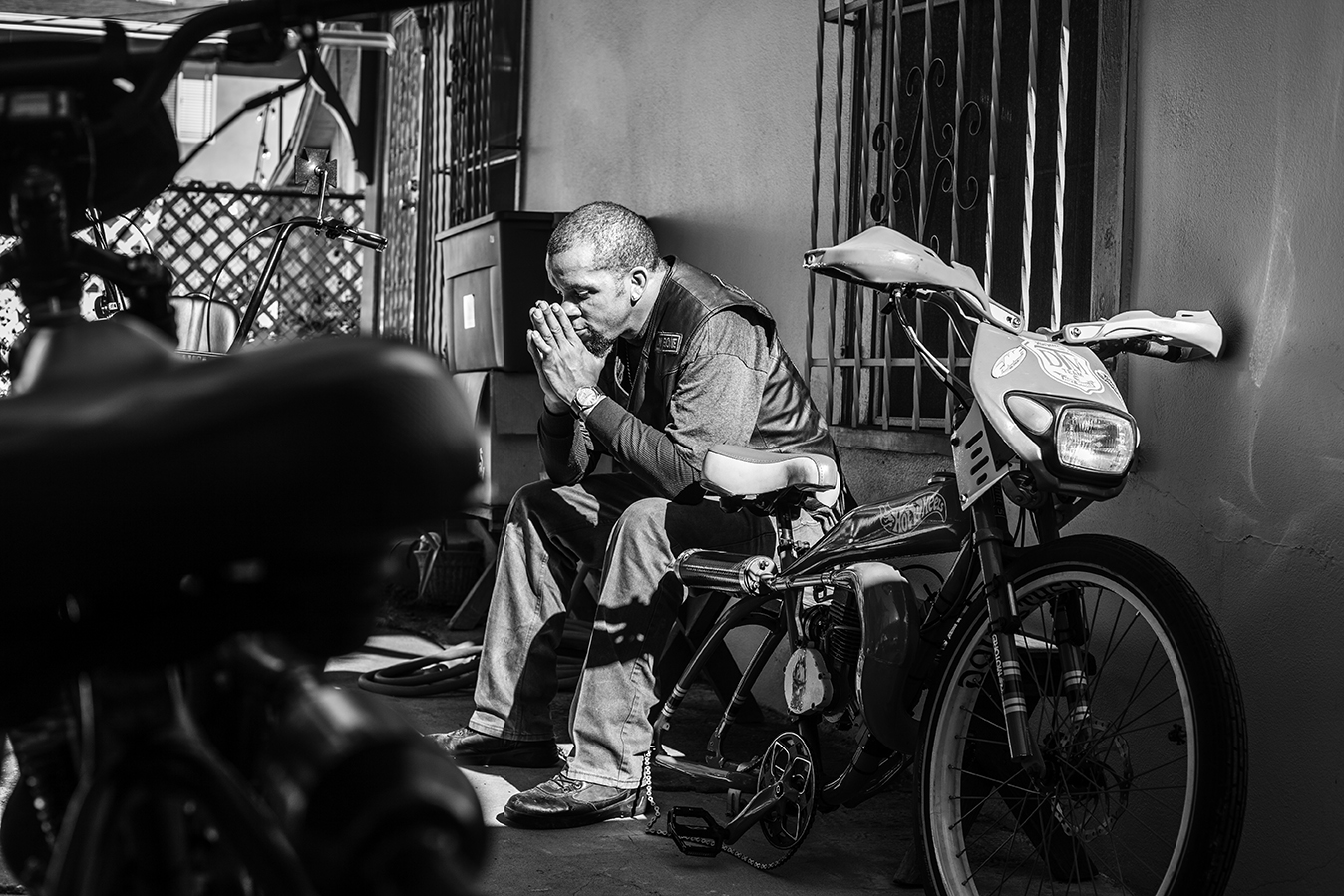 So I shot and shot as many images as I could, trying to capture as many sides to their lives as they would allow. I never really felt like I had overstayed my welcome, but as someone who struggles with serious ADHD, I just reached a point where I had to stop and on move. So here is my portrayal of the custom bike culture of South LA. Don’t be mislead now, this crew is not really as tough as I have tried to portray them. I just felt that was the “image” they like to put on when they ride, so I tried honor that. Hopefully I did them right, because, they certainly did right by me. I consider them to be good friends, and true artists, making much with little, hidden in small garages in lesser known communities. More importantly though, without any other agenda than “building cool sh#t” they are unknowingly a part of the solution of healing our city, and helping to elevate all of us to a better place. All through a goofy little hobby. 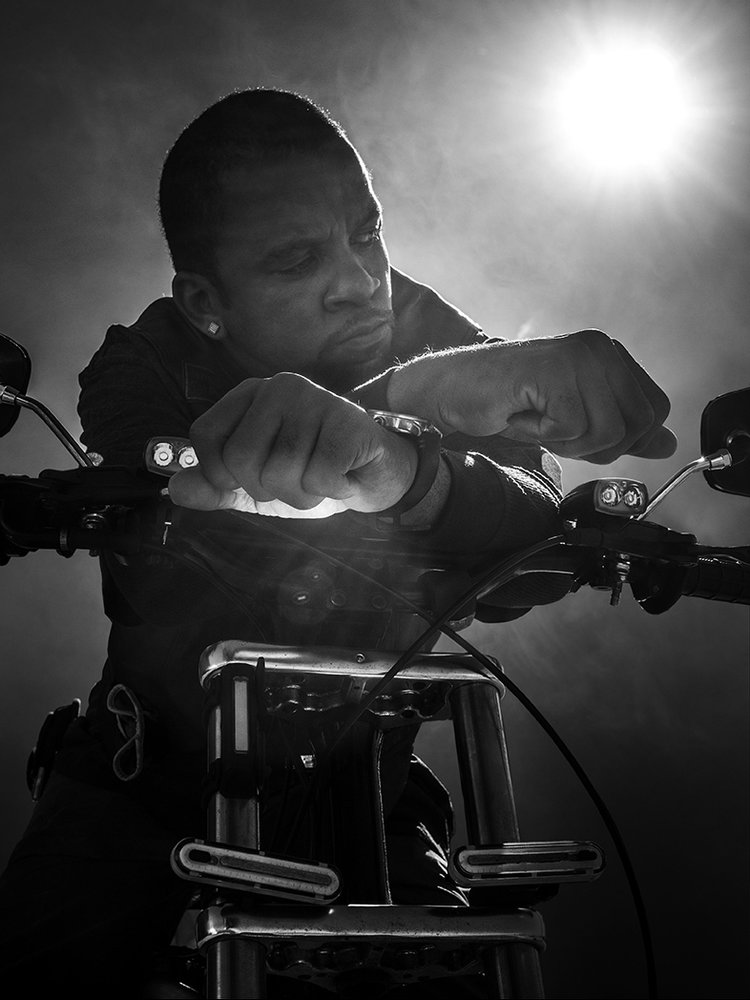