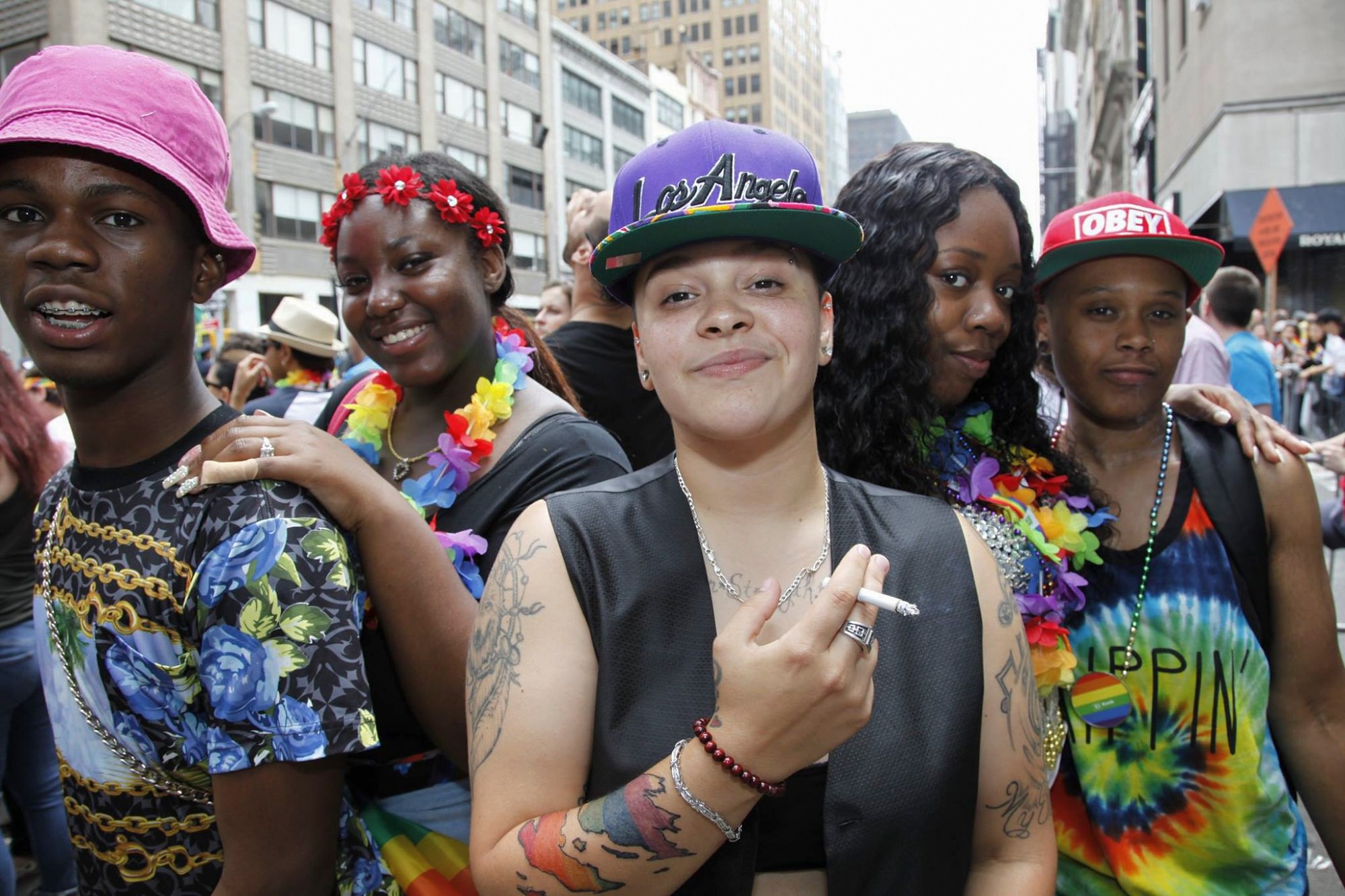 This photo project attempts to capture the spirit of the Gay Pride parades in New York City in the years since gay marriage was legalized in the United States.

The collection includes portraits of people encountered in the streets around the parades and confrontations with Christian demonstrators displaying offensive signs who came to condemn homosexuality and warn of damnation. Reactions range from mockery to dancing, heated argument, lewd gestures, outrage, and anger. I am grateful to have spent time with these young gay people and to have had the chance to photograph them.

Most of the photos were taken at close range, sometimes within a few feet of the subjects. With close ups, I try to draw the viewer into the photograph and make them feel as though they are part of the scene. In this Gay Pride series, one hopefully becomes part of the crowd of young gay people who are confronted with the hateful Christian signage.

For me this means immersing into the scene, talking with people, sometimes explaining who I am, sometimes being provocative, asking questions, whatever it takes to understand what is going on and let this guide which pictures I take.

I had several interactions with the Christians.

For instance, I got into conversation with a young Christian woman and appealed to her sense of compassion for people who are finally free from long oppression. She was surprised and doubtful and said, “You think they were oppressed?” as if this possibility had never occurred to her. I guess she had no knowledge of the social history and simply felt that she was standing against evil.

To a Christian man who was holding a sign that said, “Jesus Waterboards Pedophiles” (followed by a reference to a Bible verse) I said that I thought he was a closet homosexual because my best friend who is gay says that the more homophobic, they are, the easier they are to seduce. He didn’t appreciate this psychological assessment and refuted me with, “On my T-Shirt there are two circles with red lines through them. One says “Homo” the other says “Islam” Does that meant I am a Muslim? What are you stupid?” I couldn’t tell if he was being defensive or really thought that I was stupid. Later, after a woman punched his friend, he asked me what I thought of Christians being attacked for standing up for God.

I tried to appeal to another young protestor in a fatherly manner, telling her not to waste her life in ideology and moralizing, and that she had her whole life ahead of her with wonderful adventures ahead. For a moment I thought I got through, but after a silence she said, “You are going to Hell”.

From these conversations I saw the glazed eyed dogmatism that drove their piety and captured it the photographs that I took.

With the gay people, conversations were less didactic and more casual. In one case I spoke with a woman about what the Christians were really saying, which she was objectively trying to understand. “So, what are they saying? We’re all whores.” But mostly it was sheer fun and there was much mirth.

I said to two young women, one who was holding a sign that said, “Disarm Hate”, would you let me photograph you kissing in front of these awful signs? The one holding the sign said “But I am not gay. Just my friend is.” I said, “I don’t care” She smiled and looked at her friend. They kissed sweetly on the lips. I was impressed at their tender expression of friendship in a situation where they could have been furiously angry and have felt threatened.

These conversations helped me to feel the vibe of the crowd and from that the choice of pictures flowed naturally.

My photographic mentor is Harvey Stein who teaches to shoot people close up in order to get what he calls a “powerful image”. Generally, this calls for using a wide-angle lens to add context to what is really a kind of portrait. As one of his students said to me, “The trick is getting beyond the head shot”. For this, I generally use a 16 mm lens and shoot from one to a few feet away. In the Gay Pride case, many of the shots were of interactions between people: either Christians and Gays arguing, several friends dancing in front of the Christians, or people kissing or making lewd gestures. So, the wide-angle lens was able to capture an entire situation.

For me, the powerful image works best when it shows people expressing themselves openly. Especially in a close up, this requires not disrupting anyone even though they are aware that you are there and are taking their picture. I have found that talking to people puts them at ease and takes away that feeling of being observed and perhaps being exploited. It also puts me at ease. I stop feeling that I am invading someone’s space.

In the end, I view photography as a way to study human nature through the ways that people reveal themselves. This means catching moments of candid expression where people show something of themselves. Often these are fleeting moments. I wonder how classical painters were able to do this given that a canvas requires multiple sittings. I guess that these classical portraits are often interpretations or attempts to render an impression. With modern digital cameras one can seize the instant.

For instance, in the Gay Pride series, there is a photo of a young woman holding one hand to her chest. The expression on her face says “Who me?  Are you saying that I am going to Hell?” Her expression was gone in a couple of seconds, and I was fortunate to capture it when it appeared.

One of the most impressive things about the Gay Pride parades was the openness about sexuality, this particularly when contrasted with the conservative and condemning attitudes of the Christians. It was stunning to watch bare chested woman yelling, “Eat Pussy” to a man carrying a sign that said, “Women Belong In The kitchen” or to see mocking kisses in front of a sign that said “Jesus Kills Homos”. In my mind this is a divide that reflects a long history of conflicting attitudes towards sexuality. As an old Hippie, it reminds me of the sexual revolution of my day.

In the photos this divide can be seen clearly in the difference in expressions on the people’s faces. On the one hand, there is stern determination and impassioned righteousness. On the other there is acceptance without judgement. I wish that I had more photos of the Christians to document this other side of human nature.

I want my photographs to show people as they are without judgement or preconception. I do not want to be a propagandist or a moralist, to make a political statement, or to in any way let my sentiments intrude into the photograph except perhaps the sheer joy in seeing this world.