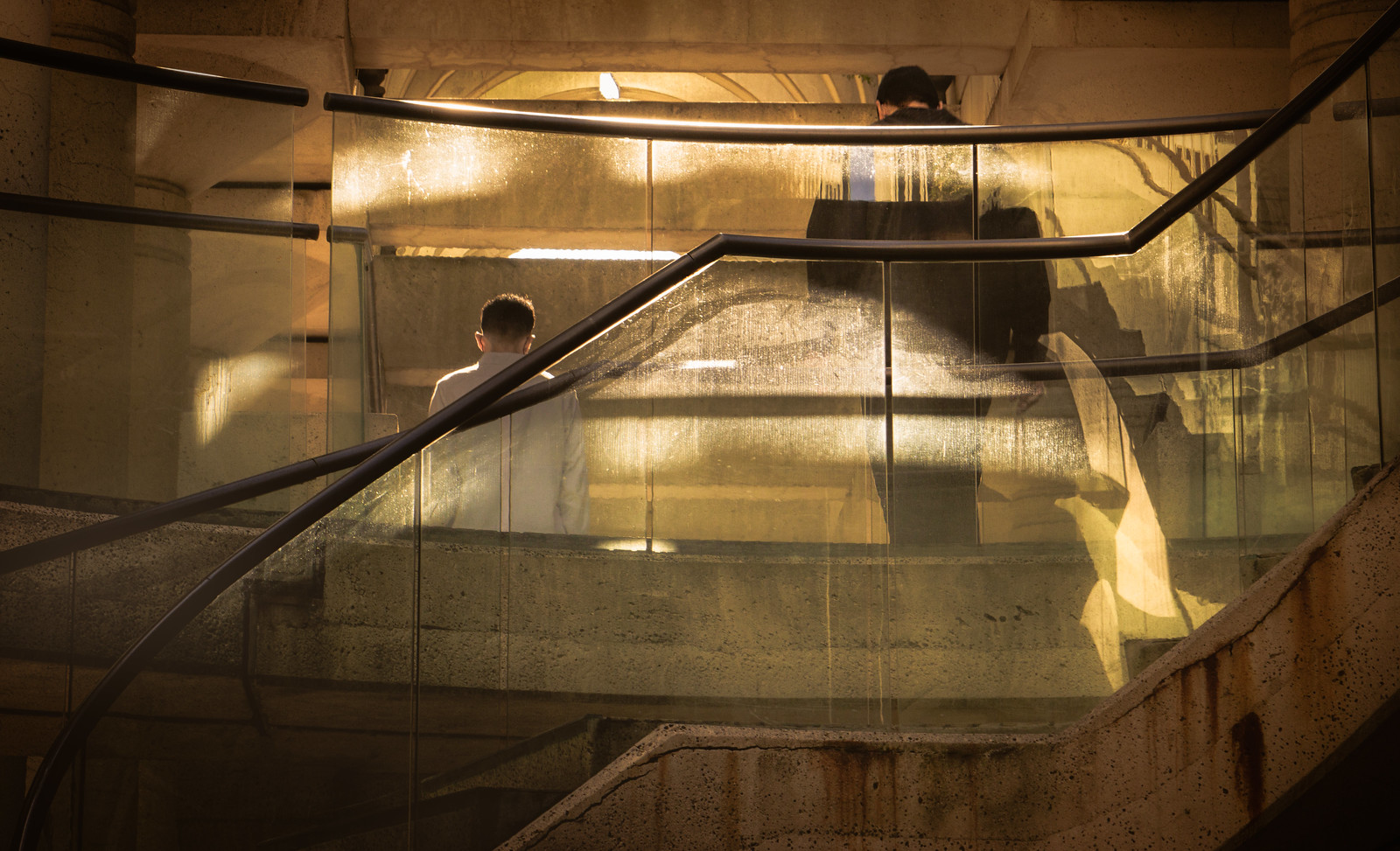 Where are you from? how did you get into street photography?

I’m from Grosse Pointe, Michigan. An affluent area although, we were not. My Mom raised 5 kids on her own, on a social worker’s pay. Grosse Pointe public schools were excellent and she wanted all her children to get a great education. As for street photography, I started taking some street photos with my phone camera and showed some of them to my brother Tom. Tom is a professional photographer and he noted that I couldn’t get the depth with a phone and suggested I upgrade to a real camera.

How would you describe your street photography style? And what do you hope to transmit with your images?

I would describe my style as “always learning” – never the master, always the student. I try and hope to show the subject in the expanse, while the subject is unaware, lost in their own moment. Perhaps I can convey what they may be feeling and thinking.

What’s the best part and the worst part about doing street photography where you live?

Best part: the grand mix of faces. Worst part: finding a parking spot and the amount of signs. There’s nothing worse then capturing an amazing shot only to find out that a foot fungus advertisement is clearly prominent in the frame.

Why do you choose to do street photography mostly in color instead of B&W?

It’s fascinating how you can stimulate or retreat with color. You can dramatically change the mood of a photograph just pushing up the yellows or darkening the reds. Viktor Balaguer’s photographs are a great example of this. He has such a way of presenting one color darkened and enriched, while muting another color and adding light to it. B&W can instantly add a drama to a photograph and I try it out from time to time.

Tell me about this Icarus character. It looks like you spent some time with him, and you got some really beautiful shots as a result. Do you always do portrait projects like this?

I spent 3 hours with Daniel! Running after him as he skated through the streets of San Francisco. I have known Daniel for over 25 years. He painted my second motorcycle. I was browsing Facebook and came across a video of Daniel skating in Golden Gate Park. He was moving in such a way that the sun was playing with his cape. Once I saw this, I knew I had to photograph it. I reached out to him and he happily obliged.

I’m saturating some projects in my head right now and hope to have these come to fruition soon but, unlike street photography, you really have to negotiate timing, light, subject, and location.

Definitely the city. All those moody buildings casting shadows, glass reflecting light onto the street, crisp angles, and of course the people, tired, elated, frustrated, or just caught up in their own little world to notice someone taking a picture of them.

A street photographer can easily develop tricks to become less conspicuous. Gary Winogrand had a funny trick. He would act like he was a fumbling amateur, trying to make his camera work. He got some amazing shots this way.

One from my bag is, finding a nice backdrop, focusing on that backdrop, and waiting for some one to walk into frame. The polite society can wreck this trick though. I once had a backdrop with some real dramatic shadows casting on a building entrance. I scanned up and down the block for someone to come to come into the frame. Then I spotted a street photographers dream! A shorter elderly   man, dressed in a dark suit, bright yellow tie, fedora, and he was walking with a cane. A real class act. I stuck my eye into the viewfinder, checking that I framed everything just right and waited. I knew it would only be a moment before he came into frame. I waited, then waited some more…then I thought, “Where the hell is this guy?”. It had been too long and I just assumed he went into a store but when I looked up from the camera, I found he was standing right next to me. He was waiting for me to take my picture. All I could say was “Thank you sir”.

I really have a hard time with neglecting the subject and focusing on the surroundings, The subject is stellar but, at the edge of the frame is a fantastic piece of light bouncing off the street or a window sill. If I crop in tighter on the subject, I lose that trinket. If I don’t zoom in, I lose the story. On a computer screen, the story may still be told but, on a phone screen, it is lost. I still fight with overcoming this.

I was in San Francisco and it had been raining off and on all day. I decided to take my chances against the rain. I started to walk around and then all of a sudden it started raining buckets. To avoid getting drenched, I ducked into a doorway and noticed this alley way in front of me. The rain sopped and on cue, a figure emerged from the end of the alley. He walked casually. He would stop and look at a window or look down at a piece of the sidewalk, as if he was just checking on things, as if he was checking on his home. I started snapping pictures until he was about 25 yards away, he then noticed me. He continued walking towards me until he was directly across the street from me. He stopped, looked directly at me, he raised his hand and waived, then with his other hand he raised a camera. A fellow street photographer! I smiled broadly, waived back and held up my camera. He nodded to me, turned left and drifted down the block. I don’t know but, to me, that moment was a kind of a welcoming into the club.

It has really solidified to me that people are beautiful. Yes there is a real chiseled evil amongst us and we can’t let it rule or we will lose the heart of what makes us a gathering of fantastic underdogs, characters, and sightly used triumphs. Two of my favorite examples of this are by Janys L:

One last question. Your Flickr bio reads, “It was my mom’s idea.” How so?

My Mom was a philosopher and an artist that had five children too soon. It’s funny how life can ask you you to please be still but it never asks you to be dull. She is in every photograph I take. Indirectly, it was her idea.

Editor’s Note: To learn more about Cameron and see more of his work, be sure to visit his Flickr photostream. This photographer was selected from our Flickr group (Street Photography Magazine), where we regularly choose photographers’ work to be published in our magazine.