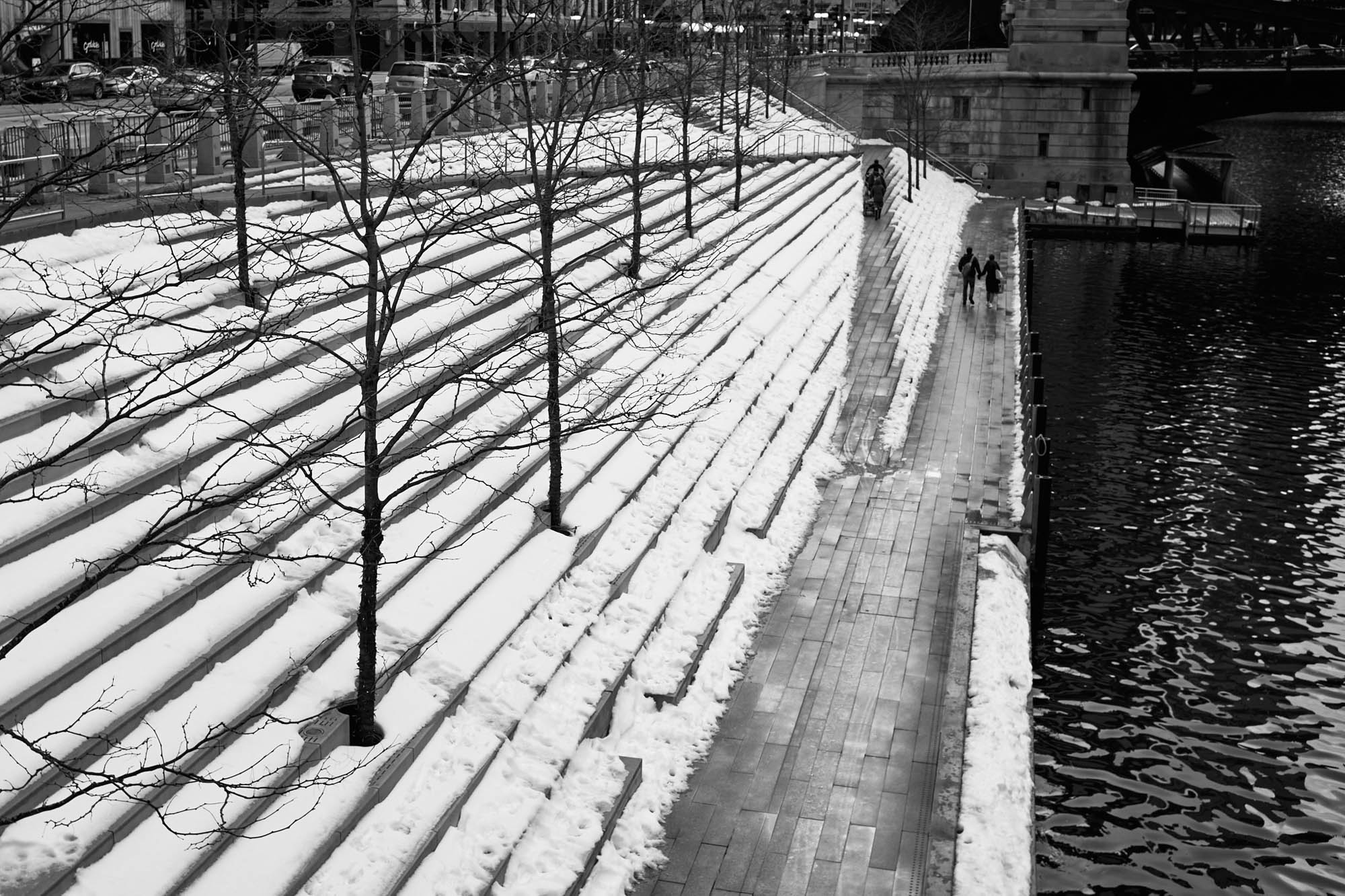 Winter in a cold climate can be a challenging time for street photography. Bulky coats and gloves make carrying and operating a camera awkward. Low temperatures can sap batteries and cause lightweight digital cameras to malfunction. Apart from these technical difficulties, winter can seem to put a chill on our subjects. People on the street are bundled against the cold, covering the expressions and gestures we often look to highlight in our photography. Rather than lingering in a park, on a corner, or at a café table, people hurry on their way, wanting to get inside and out of the cold.

In Chicago, though, life – even street life – doesn’t stop for inclement weather. As the temperatures plunge and snow begins to fall, the streets take on a unique character. This project sought to capture some of Chicago’s street life during winter 2021-22. Although some of the qualities that street photographers search for were hard to find, others presented themselves in a new light. Winter clothes (as well as face masks, still in widespread use due to the COVID-19 pandemic) might hide expressions, but became intriguing subjects in themselves. Bright sunlight is sometimes in short supply during a Midwestern winter, but freshly fallen snow can create striking contrast – especially in black and white images. While this project is mainly centered in time and place, aiming to bring across the feeling of “what it’s like to be there,” it is also about some of the basic elements of photography: shape, tone, and texture.

The beginning of winter feels festive, as holiday shoppers fill the sidewalks on Chicago’s Magnificent Mile, young people look forward to a break from school, and the city’s Christkindlmarket opens.

Christmas markets are a common feature of holiday celebrations in Northern European cities. Following in that tradition since 1996, the Christkindlmarket at Daley Plaza has marked the beginning of Chicago’s winter holiday season. For a few weeks, the plaza’s landmark Picasso sculpture is surrounded by booths selling handmade gifts and decorations. Chicagoans warm themselves with hot, spiced wine and apple strudel, enjoying the crisp air on a winter evening.

On one of my visits to the Christkindlmarket, I noticed an elegant couple who seemed to be transported directly from Zurich or Vienna. With the background of Black Forest cuckoo clocks, it might not be easy to guess that this photo was made in the heart of America’s Midwest.

After the last day of school before the winter break, young people gather in Millennium Park for a group ride.

Mass bike rides in large US cities have become both popular and controversial. Riders argue that they help to bring awareness to an ecologically-friendly form of transportation. Critics charge that they encourage dangerous disregard for traffic regulations, as groups of riders take over streets and ignore red lights.

Any number of things might draw a photographer’s interest to this scene. With the cyclists’ expressions largely hidden under their hoods, I found myself focused on the rhythmic pattern created by their bike frames and wheels.

An upward gaze toward the towering skyline can be a likely sign of a tourist taking in the big city. Holiday decorations in the background and the man’s COVID mask locate this image in time. The texture and contrast of his winter coat against the white stone and shining windows of the buildings in the background attracted me to this scene.

With an average January temperature of 26°F, Chicagoans joke about living in “Chiberia” (a term apparently coined by a local weather forecaster) and dress accordingly. As winter takes hold, parkas and puffer coats take over the streets. Heads disappear under hoods, caps, and earmuffs.

The first image in this series of three is primarily about texture. The woman’s white fur parka and the man’s slick puffer coat offering contrasting textures, set against a row of downtown buildings.

I was drawn to the second image by the subject’s shape – all coat with a phone protruding from the parka hood.

In the third image from this series, low winter sunlight casts long shadows, just illuminating the couple’s eyes between their hoods and COVID masks.

Chicago is often considered to be the home of the skyscraper (the first ten-story, steel-frame building having been constructed here in 1885) and the city’s downtown architecture is world-famous for its beauty and technical innovation. Chicago’s notorious temperature swings, however, can combine with its tall buildings to create something of a hazard at street level. Ice and snow accumulate on windows and ledges, then melt and fall from their heights. At the winter’s first snowfall, signs appear on downtown sidewalks warning pedestrians of the danger from above. In this image, a woman appears to heed that advice.

Outside the Harold Washington Library, a man shelters from the wind and lights a cigarette just as heavy snowflakes begin to fall. My goal with this image was to capture the mood and feeling of a cold afternoon in the city.

A winter storm transforms a newspaper box near the Chicago River into a snow sculpture. My eye was drawn to the texture of the snow and the contrast it creates on the black metal box.

During warmer months, the Chicago Riverwalk (developed between 2015-16) draws large crowds to its bars and cafés. In winter, the crowds diminish, but some Chicagoans prove hearty enough for a stroll along the river after a snowstorm, as you can see in this article’s top image.

Inline skates or roller blades were first invented to help ice skaters practice in warm weather. As I made my way across a bridge one cold January day, I encountered someone who seemed to have flipped the script. He looked at me with a puzzled expression as we passed, perhaps wondering why someone would bother to photograph him. Doesn’t everyone roller blade in the snow?

After a long winter, the first day with temperatures above 40° feels like spring and Chicagoans are ready to break out their warm weather wardrobe. Some get a jump on things, breaking out the shorts, but not yet putting away the parka.