For a while now, every time I meet a photography fan, they ask me the same things, they have the same doubts, and though I’m no expert, I do believe that my opinion about several photographic myths could be interesting, so here they are:

1. The camera isn’t what is important

How strange that everyone who says that has a top-notch camera, like a full frame or a medium format. It’s true that to compose and capture an interesting moment the important thing is to see it and hit the shutter at just the right moment, but if the camera has a small delay between the pressing and the capturing, your viewfinder isn’t the best for seeing the world, and each time that we want to change a certain parameter we have to run to a menu, things get pretty complicated. Plus, those pretty blurred backgrounds require, due to optical questions, cameras with large sensors and quite a luminous optic, which are not available in more economic options, like telephoto lenses that capture wild animals, shift lenses to create interesting effects or costly, high quality lenses that give a definition that is almost better than the reality. Even in street photography, which is where the camera you use matters the least, all the greats are known for using a Leica. There must be a reason 😉

2. With that camera, anyone can take good photos

A point completely opposite to the last one, and strangely enough, I also believe it to be false. With a good camera, you can get sharpness, definition and dynamic range that would be impossible for an iPhone, although to do so, you need to know how to use it, something that takes time to learn. Curiously, with a high quality camera I believe it is easier to take bad photos than with a compact camera, perhaps because, among other things, with a reflex the depth of field is something to keep in mind and there are more parameters to configure that influence the final take that must be controlled. With a compact, all you have to do is frame well and you can get some striking results by applying a little Instagram.

3. The great photographers don’t use Photoshop (or any editing software)

A photograph reflects how its author views the world, and for that he or she can adjust it however they see fit. If the result seems real, so be it. The impressive photograph of the Afghan girl, taken by Steve McCurry, was taken in a portable studio with a kind of roll that heavily saturates colors and afterward revealed so it would turn out perfect. Today, it would’ve passed through Photoshop and even if it wasn’t touched up by the photographer directly, there’s always the assistant, editor or graphic designer who might give it that added touch.

4. Analog photography – That was photography, no tricks, no touch-ups

Same as the last point. It is so easy to manipulate a photo nowadays, and thanks to people with exaggerated taste, Photoshop has been turned into almost a demon when its use is indispensable for anyone who shoots RAW. People say that before, in the analog age, photos weren’t touched up because it wasn’t possible, since you had to send the images to a laboratory and they gave them to you just like the cameo out of your camera. (This doesn’t take into account that each roll of film had a slightly different behavior, as did each developer, which in itself is a distortion of “reality” if you want to get technical). It only takes a few hours spent in a dark room (of photography) to see everything that can be done to transform a photo, from the time it comes out of the camera until it is fully developed. A general contrast: reframing, focus, over exposure or under exposure locally, covering stains…come on, it’s the same thing that’s done in Photoshop except you get all the “liquids” for free. 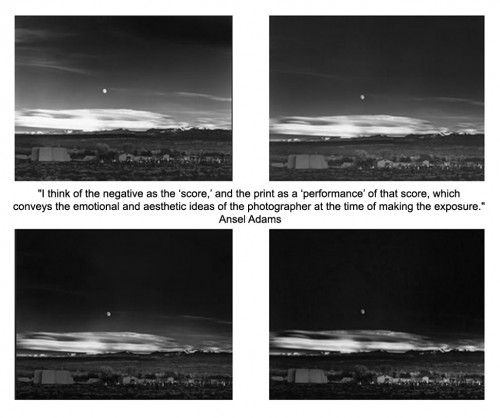 5. The great photographers are born with a special talent

If that was true, a photographer would never evolve during their life and they would always take the same amazing photos. Interestingly though, with the passing of years, a photographer’s style changes and they contribute new viewpoints. Perhaps there are people who have an instinctive way of framing things well, but if you read the life story of any great photographer, they all spent years shooting without stopping, studying the work of other people (photographers, painters, writers, it doesn’t matter what art), trying new techniques, and working without ceasing. If it was just a question of talent, that preparation would be useless. All you have to do is look into the work of Cartier-Bresson to see how much he exerted himself to take good images, leaving natural talent on a rather distant plane.

These are some basic myths, I hope you’ve enjoyed my explanations. Another day I will write about technical myths, which is something so precise it makes taking a photo seem like some kind of voodoo ritual.