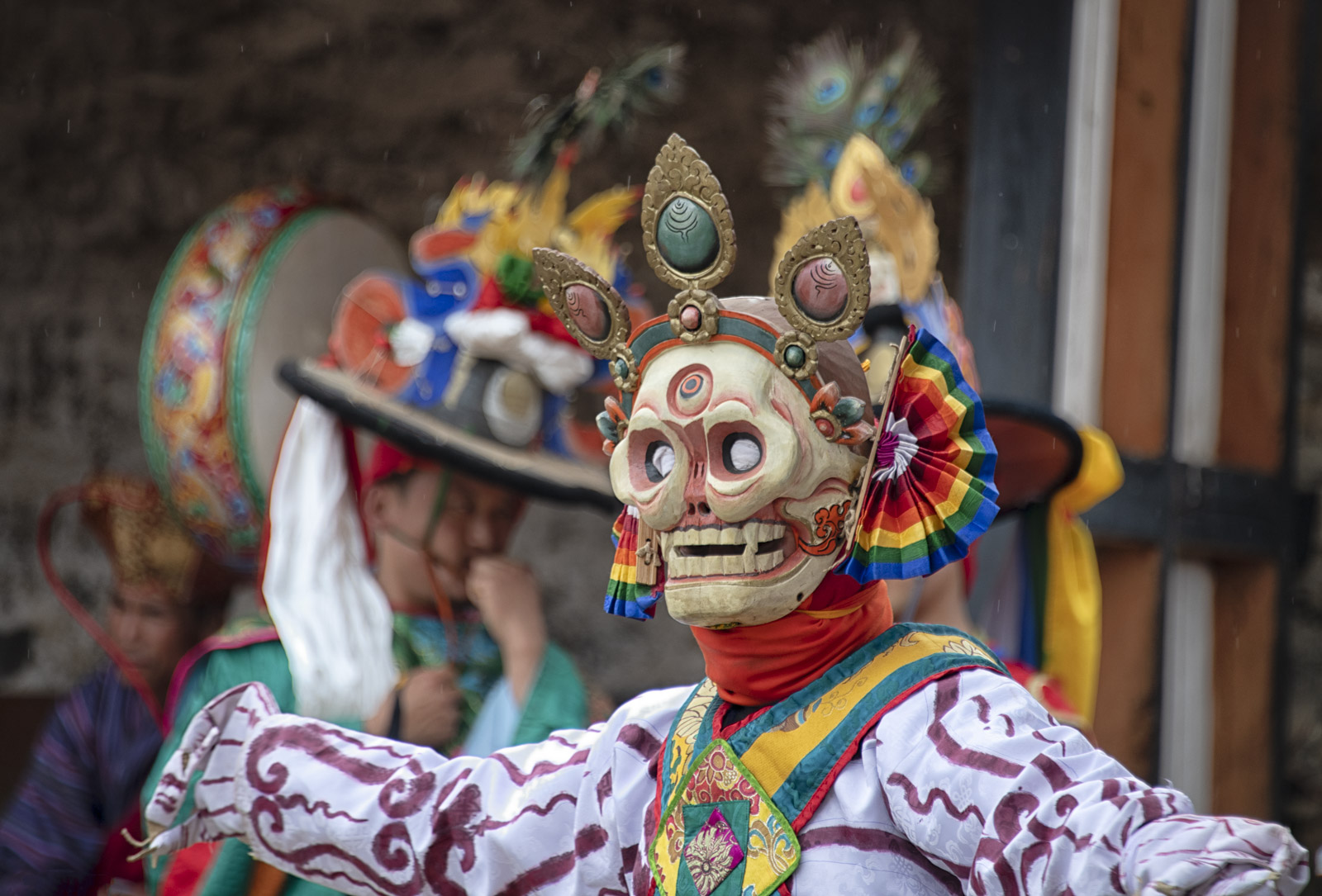 In April 2019, a photography buddy and I took a 19 day cross country photography trip to Bhutan. Bhutan has literally jumped from the feudal age to the modern age, skipping all of the ages in between. For centuries, this remote landlocked country has been closed off from the rest of the world. Bhutan was the last country in the world to get television in the year 1999, and cell phones were first introduced in 2000. It is a country where the first elections in history were held in 2008 and the King of Bhutan has proclaimed that the “Gross National Happiness” is more important than the “Gross National Product.”

The country is magnificently beautiful with its snow-capped Himalayan mountain ranges, its sub-tropical valleys and numerous other ecosystems. Small villages dot the countryside, some looking like they are perched on the mountain side and some built in the lush valleys. With modern transportation still in its infancy and with relatively few people having cars, traveling the narrow, dirt roads through the mountain passes with no guardrails was a white-knuckle experience.

As we travelled further East, the population became sparser and we came across very few Westerners in the villages we visited. The people could not have been more friendly. They were certainly as curious about us as we were about them. It was a street photographer’s dream. Now that the country has opened to modern society, there is tremendous pressure, especially by the youth, to modernize even faster. If you have the opportunity to travel to Bhutan, I would suggest doing it sooner rather than later in order to see a country still living the same way they have lived for centuries. 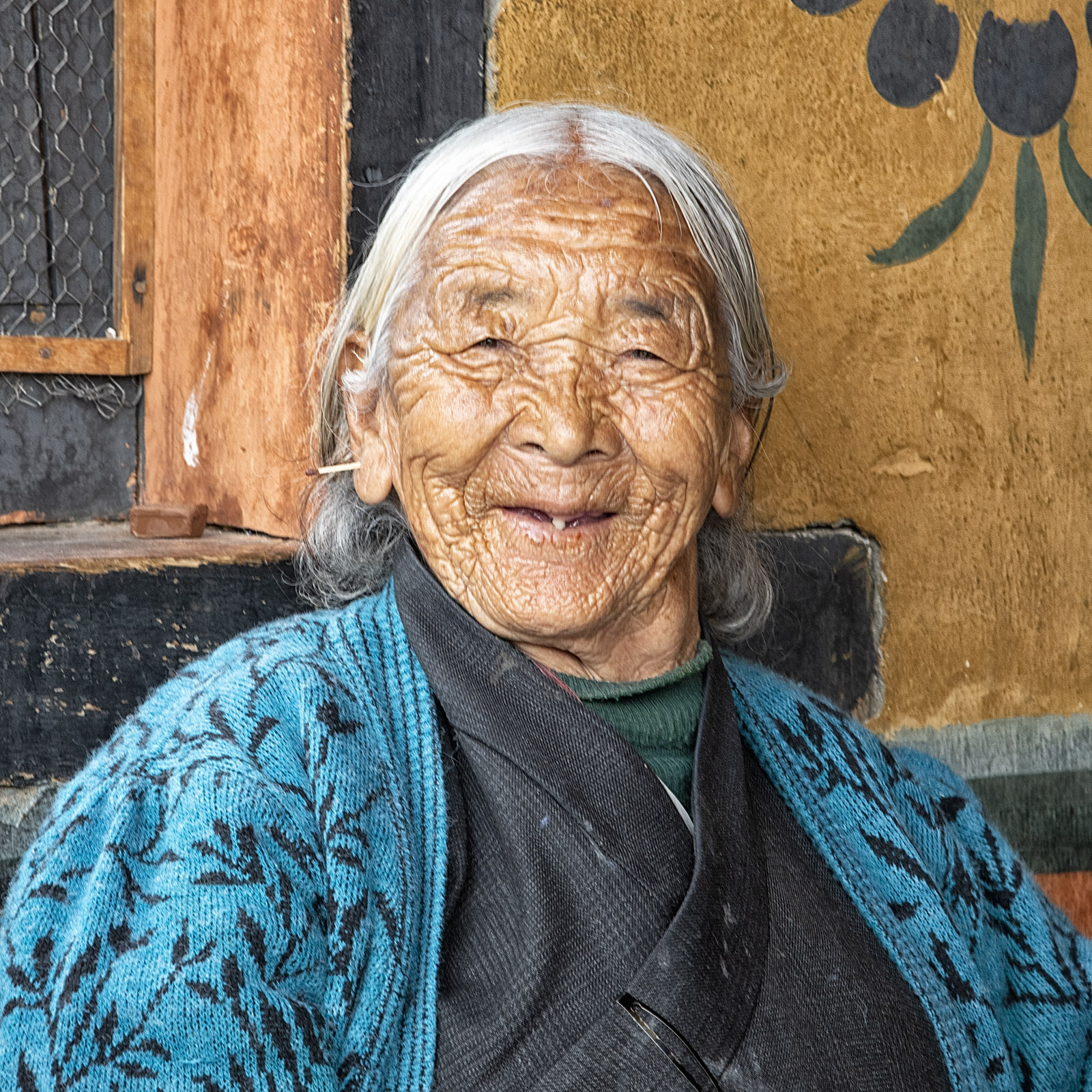 In Thimphu, the capital of Bhutan, there is a Buddhist Temple located in a beautiful park. People come here to pray and socialize with their friends. It also doubles as a great place for young people to hang out. When I saw this woman, I just knew that I had to capture her picture. Her roadmap face, single protruding tooth matchstick earring and endearing smile almost had me too excited to hold my camera steady. 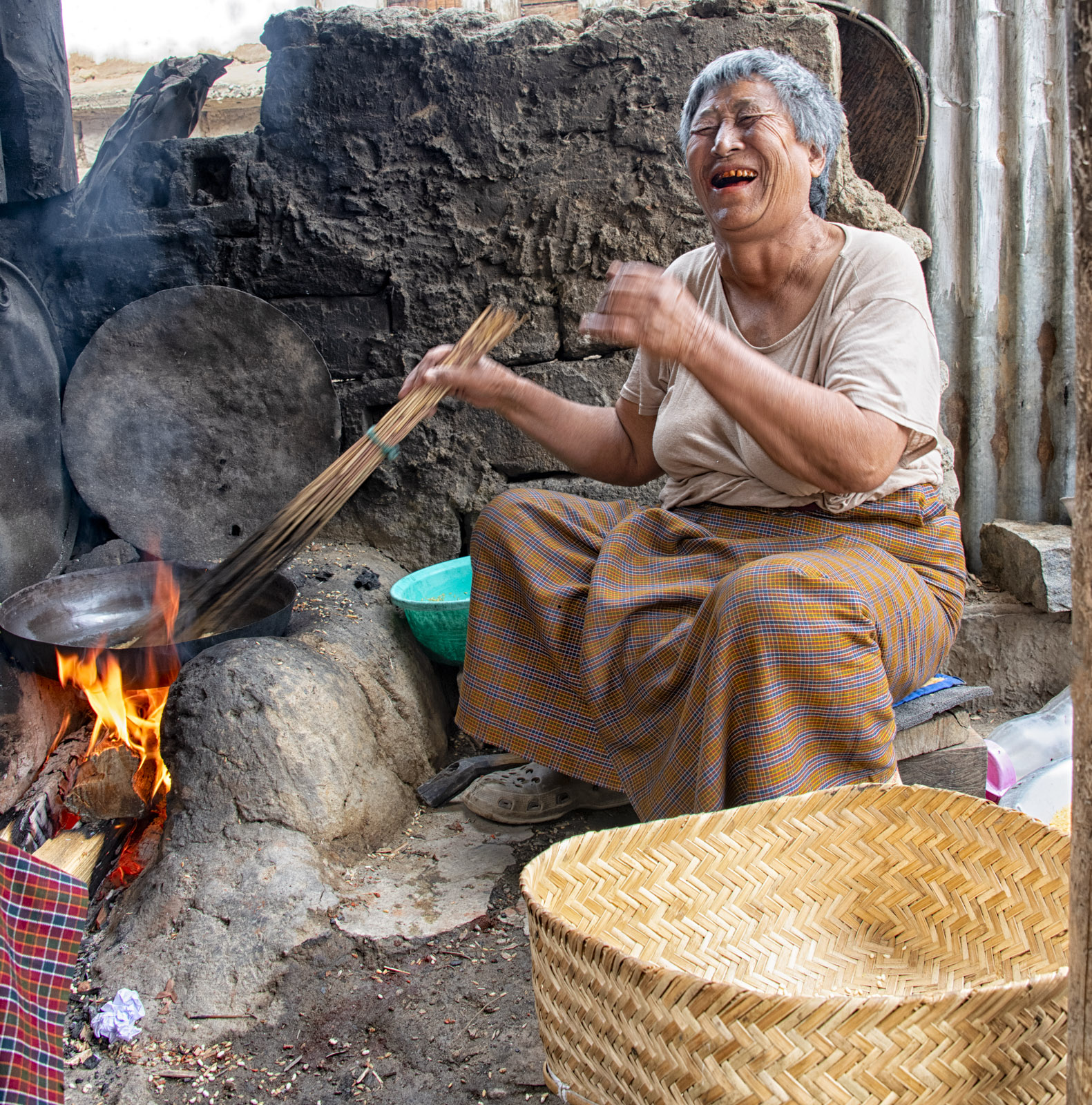 Walking the side streets and back alleys of any small village always leads to some photographic discovery. In a small village outside of Puankha, I came across this woman who was making Zaow or the Bhutanese equivalent of Rice Krispies. She would supply small bags of these treats to the local general stores. They did taste great right out of the pan. Most of the older people in the small villages have never seen a digital camera. The typical response that I got when showing a person their picture on the back of my camera was non-stop laughter. 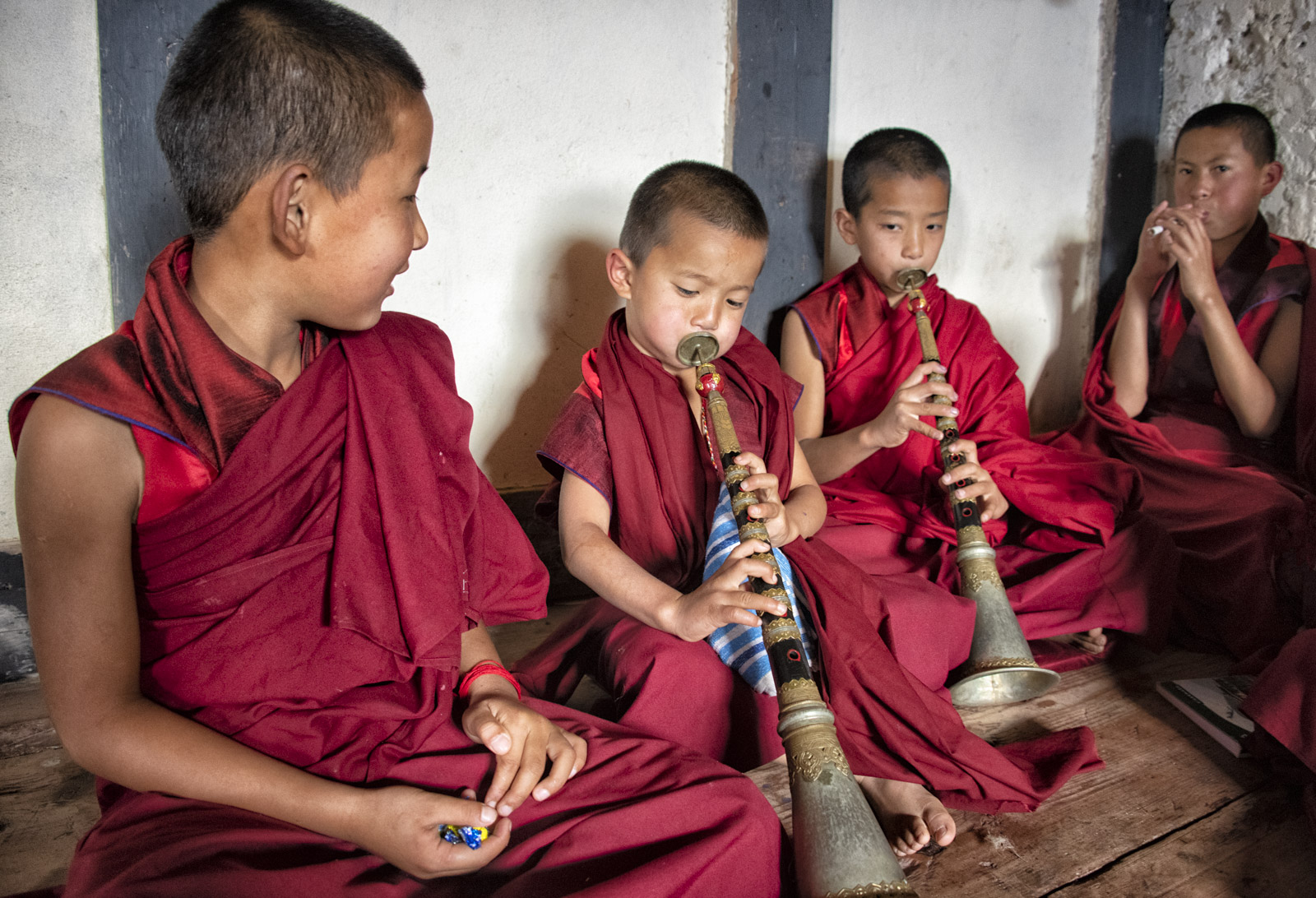 Being a predominately Buddhist country, my trip was filled with monasteries and monastery schools. You can freely walk through the school’s courtyards where there is usually a lot happening; with some polite requests, I was even allowed to enter a few classes while they were in session. One particularly interesting visit was when I came across some boys during their music class. They were learning how to play the dungchen or Tibetan long horn which is used during many of their ceremonies. The beginners were using a glass Coke bottle with a straw in it to practice the correct blowing technique. They then moved up to small kazoo-like instruments and finally to short horns. The actual horns used in ceremonies can be up to 10 feet long. 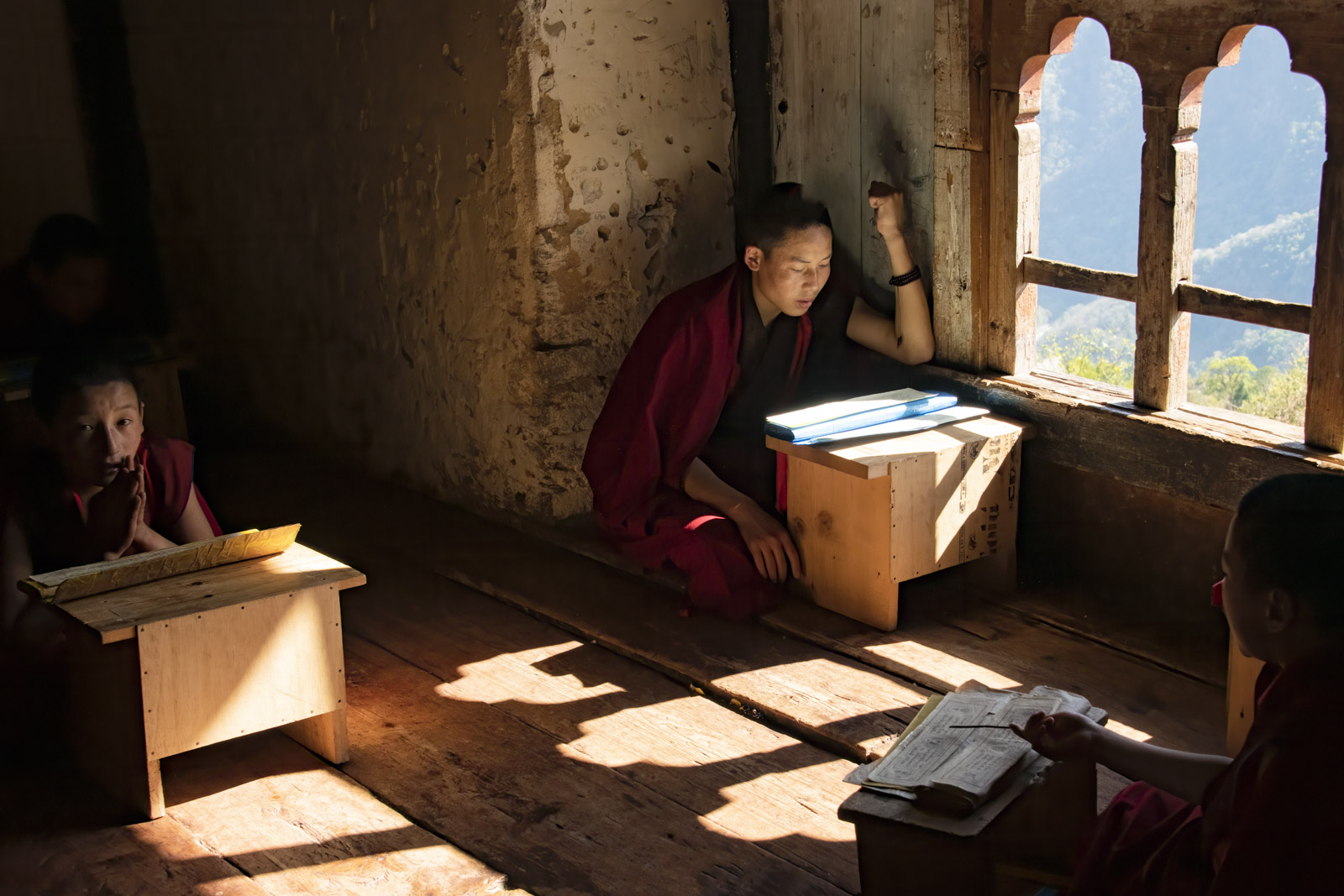 I hung around in this monastery classroom for close to an hour watching the intense quiet studying they were doing. After the initial attention that I received, I faded into the background very quickly. With no artificial lighting in the class, the boys had to use whatever light they received through the windows. 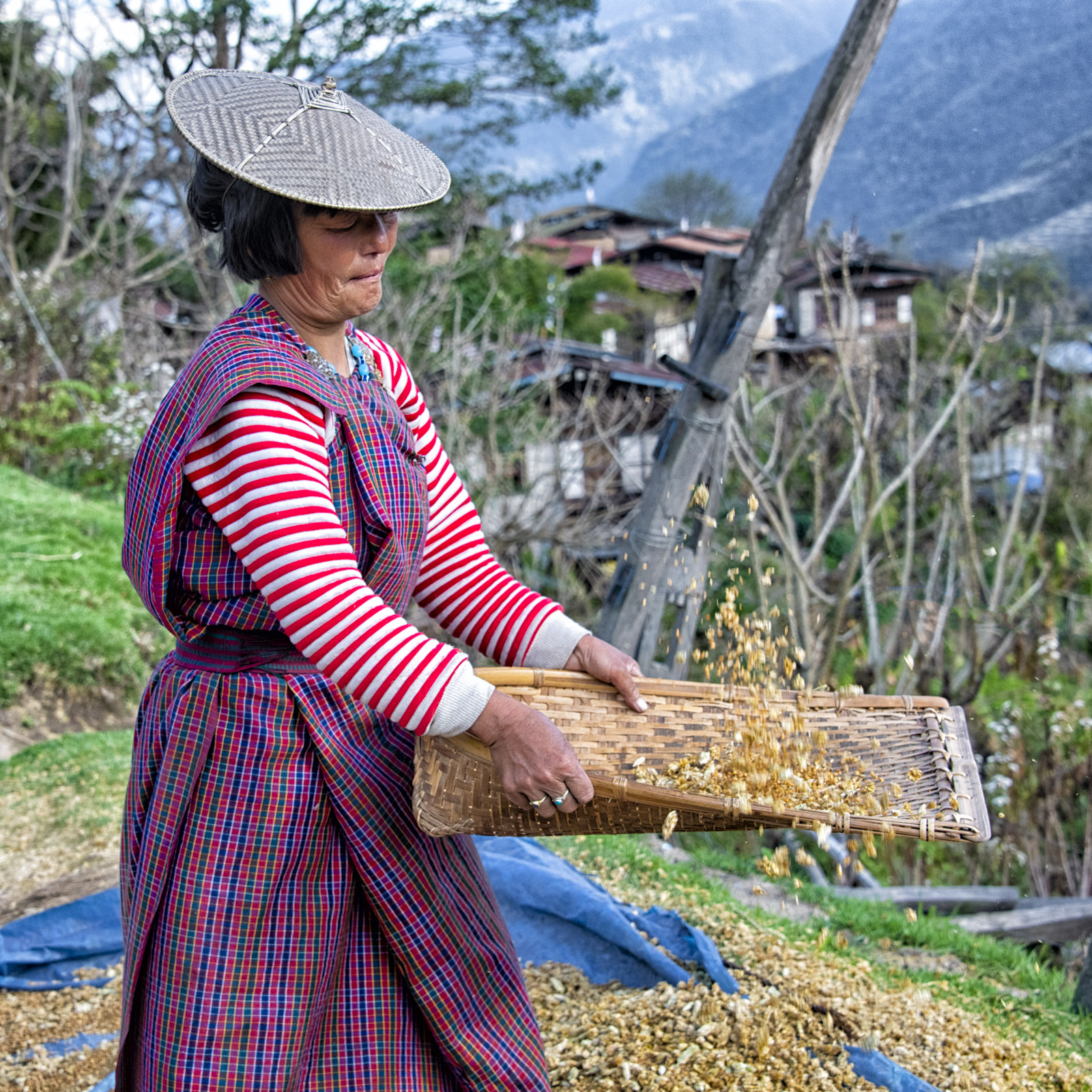 Bhutan is predominately an agricultural country. The remote villages are mostly self-sufficient and they have no mechanized farming equipment. Bull and Yak power supplement human power for most tasks. This woman is winnowing the wheat, separating the wheat from the chaff the same way it has been done for centuries. 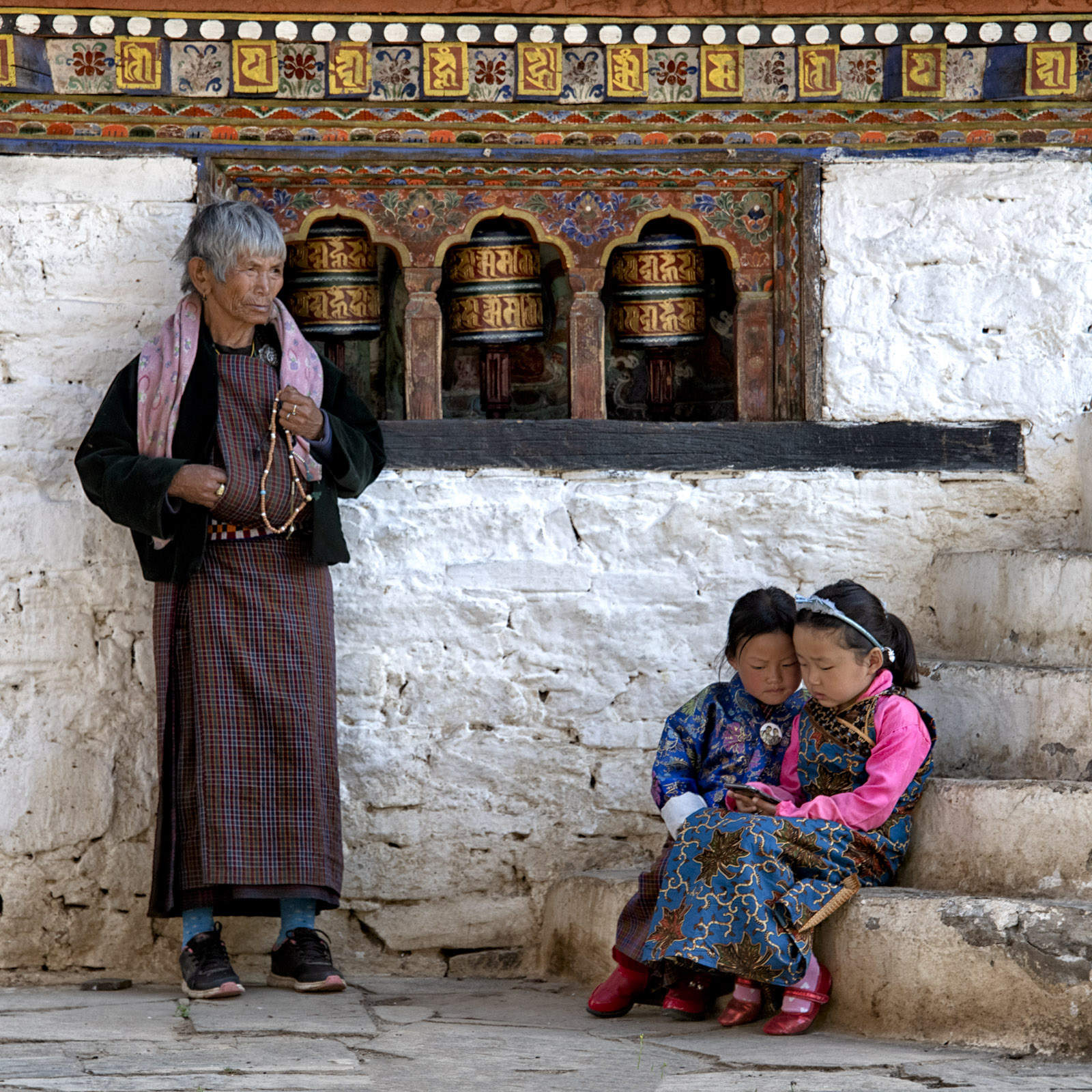 The old with the new in Bhutan is exemplified in this photo. The older person is engaged with her prayer beads and prayer wheels while the children are fixated on their cell phone. 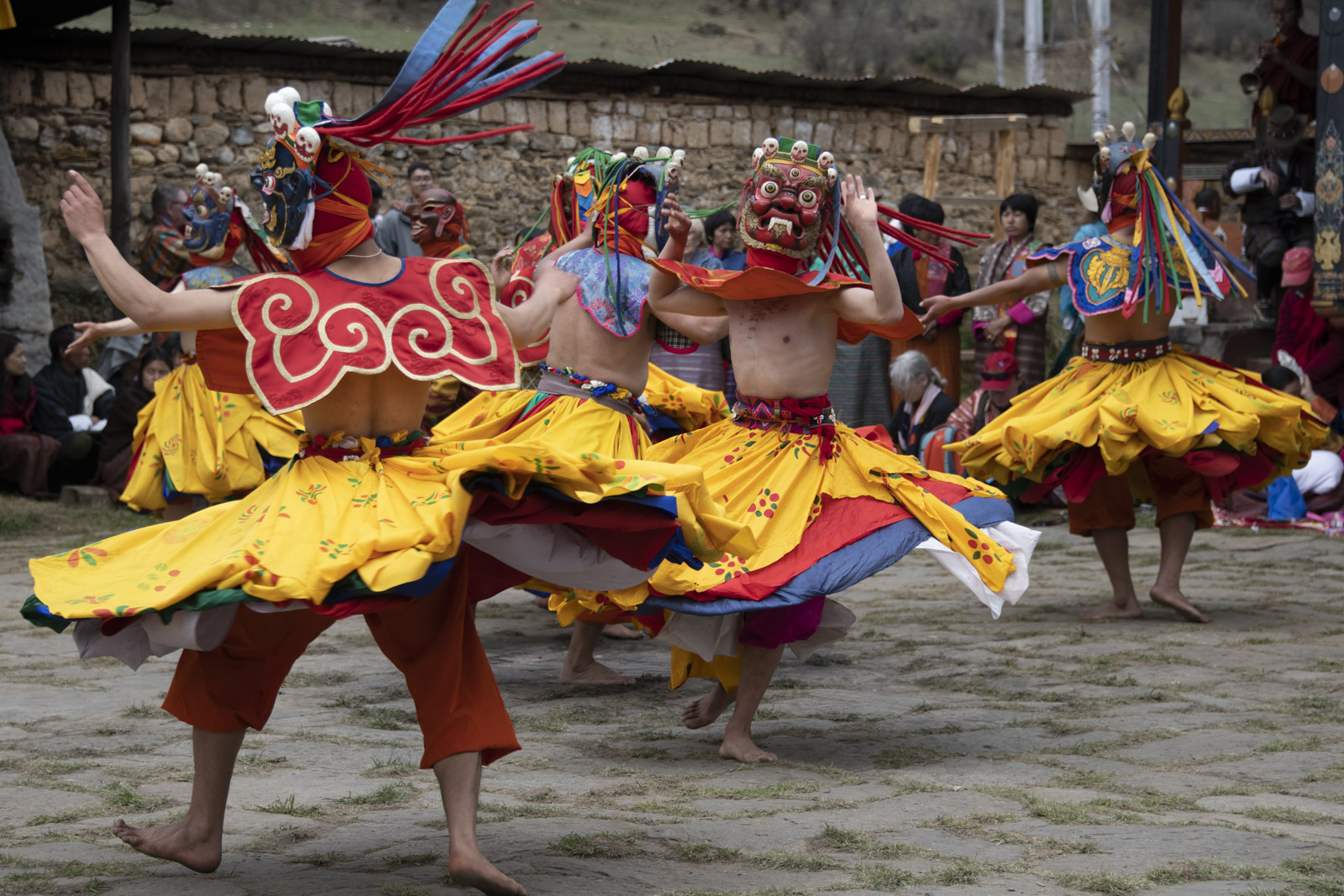 Festivals are very important in Bhutan. Every village and town in the country holds one festival or Tshechu each year. Entire villages come together to sing, dance, drink and receive blessings during this multi-day event.

It is believed that every Bhutanese person must join in at least one masked dance to wash away their sins. The dances are elaborate over one-hour productions with names like “Dance of the Terrifying Deities” and “Dance of the Lords of the Cremation Grounds.” The masks and costumes are beautiful and very elaborate. 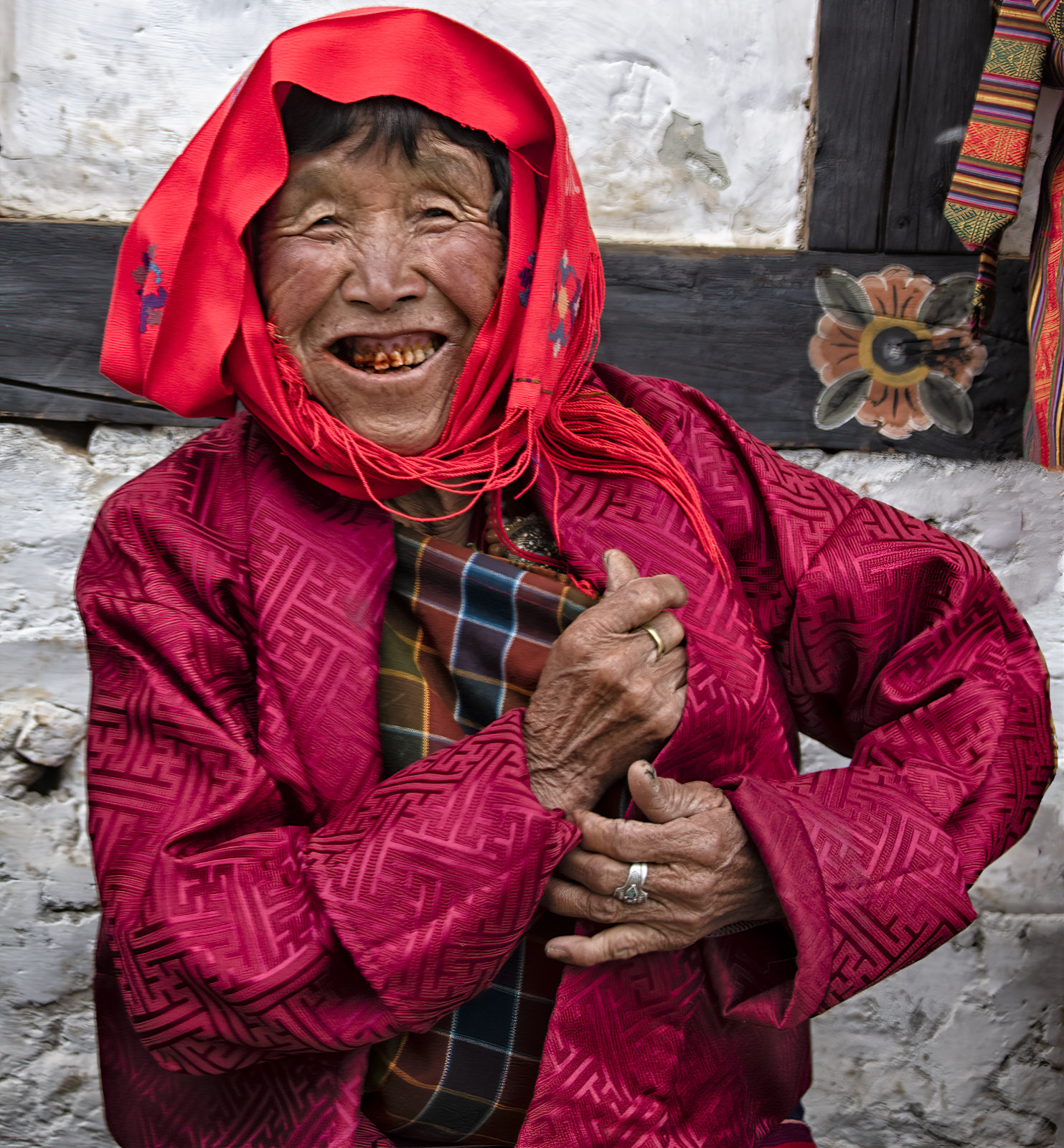 A very large percentage of the people in Bhutan chew Beetle Nuts. It gives them a little high and is legal. Besides making their mouths and teeth red, it causes awful tooth decay.

Most rural villages have no access at all to dental care and people go their entire lives without seeing a dentist. 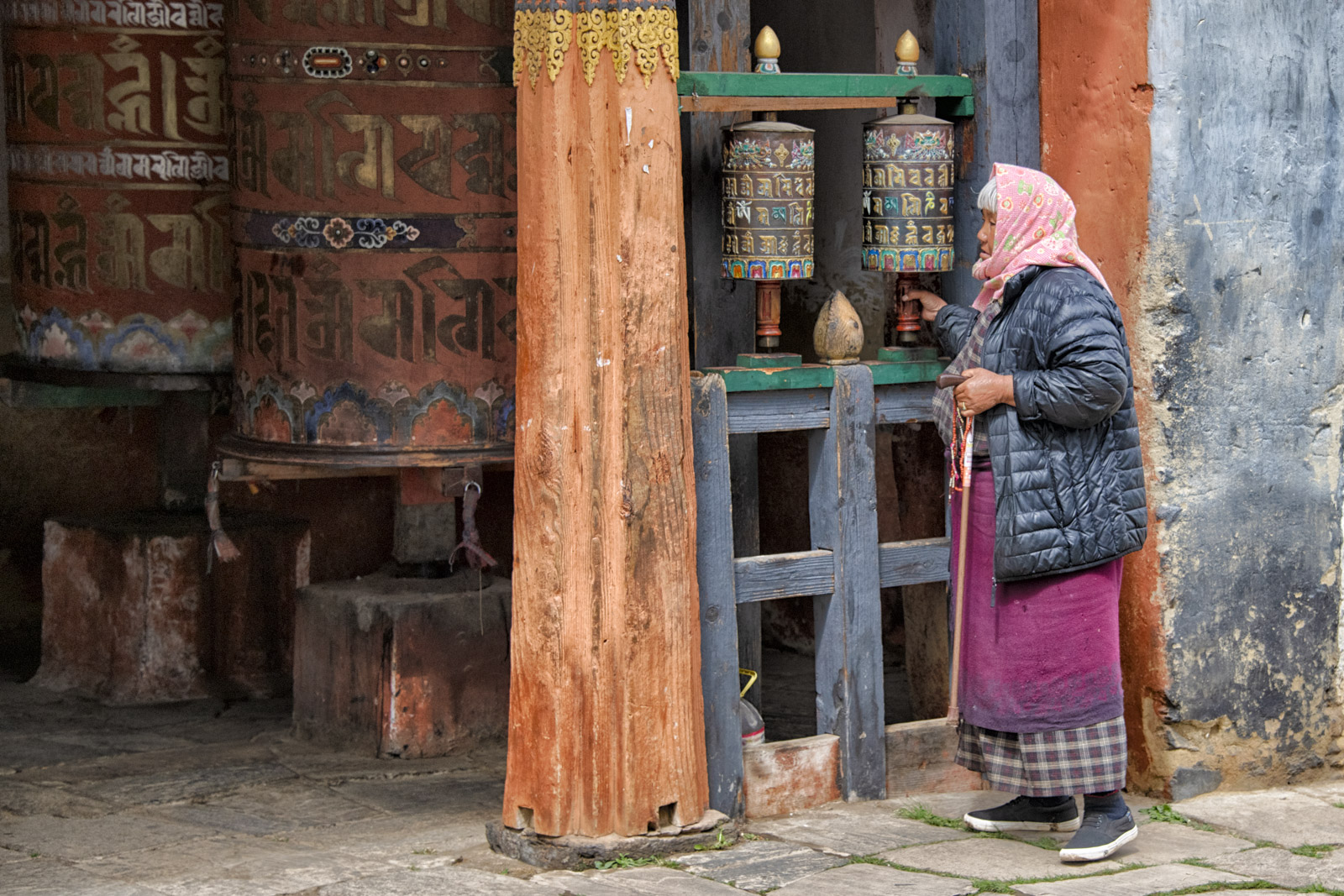 Throughout Bhutan, in every town and village prayer wheels of every size are seen. They are considered a divine tool that spreads love, compassion and blessings to everyone they care about and all other humans and sentient animals. Inside these wheels are copies of the mantra or prayer that spreads blessings. The large wheels are spun as people walk by them. This is said to have the same effects as saying the mantra out loud. If a large wheel is filled with many copies of the mantra, it is the same as speaking it many times. I saw people walking around temples that had over 100 wheels, spinning each and every wheel. They circled the temples over and over for hours, putting a small stone in a pile each time they completed a lap, keeping track of how many times they completed the circle. Some wheels are also placed where they can be spun by the wind or moving water.

Many people carry small wheels (Mani wheels) around with them all day and they are constantly spinning them as they walk and talk. Modern Buddhism as practiced by the Dalai Lama also says that the mantra on a computer hard drive works the same way since the hard drive is spinning hundreds of thousands of times per hour. 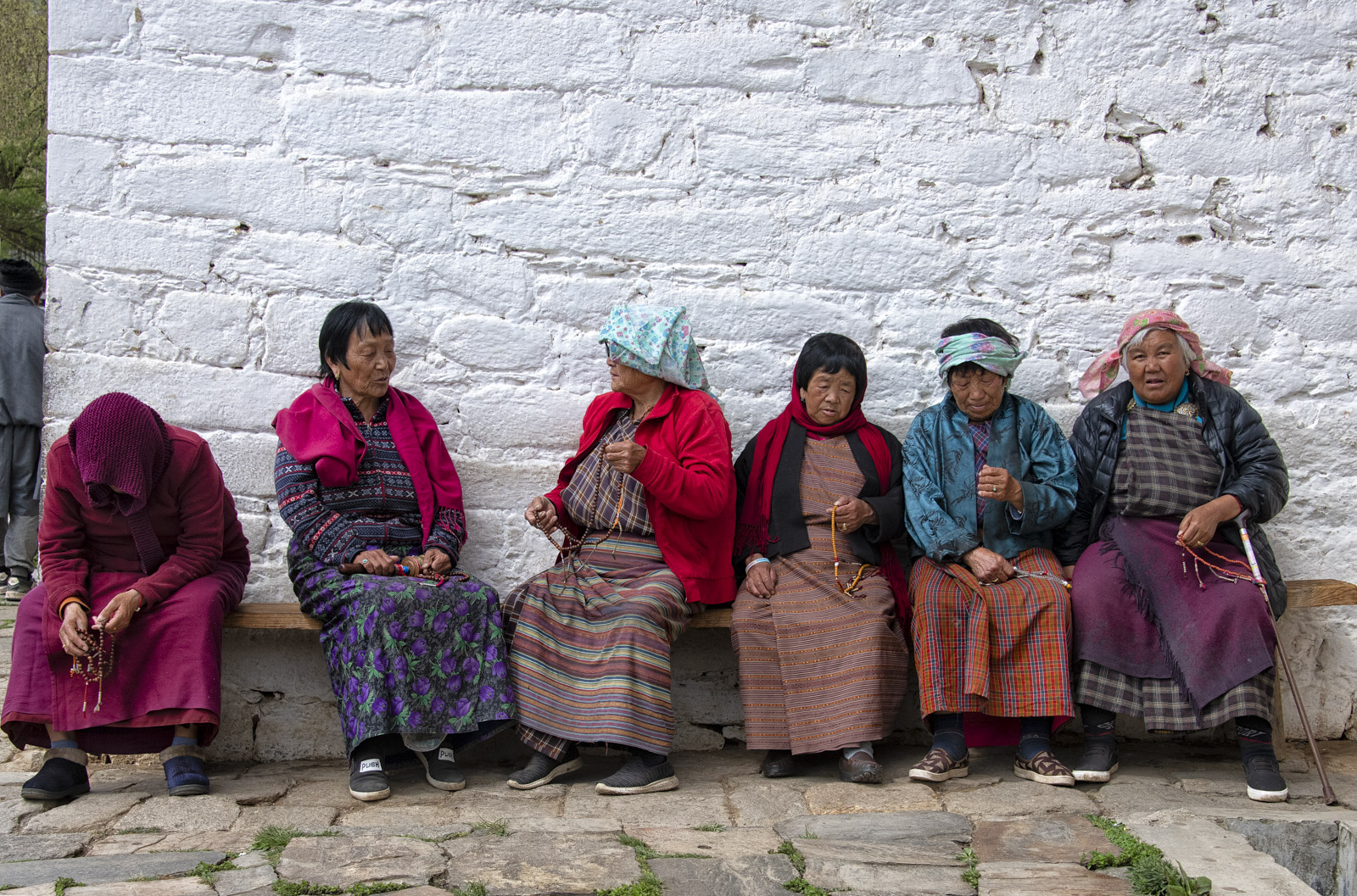 This was a bench at a village temple. The people there would walk around the temple, spinning the prayer wheels dozens of times and then take a much needed break to rest and socialize.

I was told that the bench was also a great spot for single widows to get together and possibly find a new spouse when the men sat down to rest. 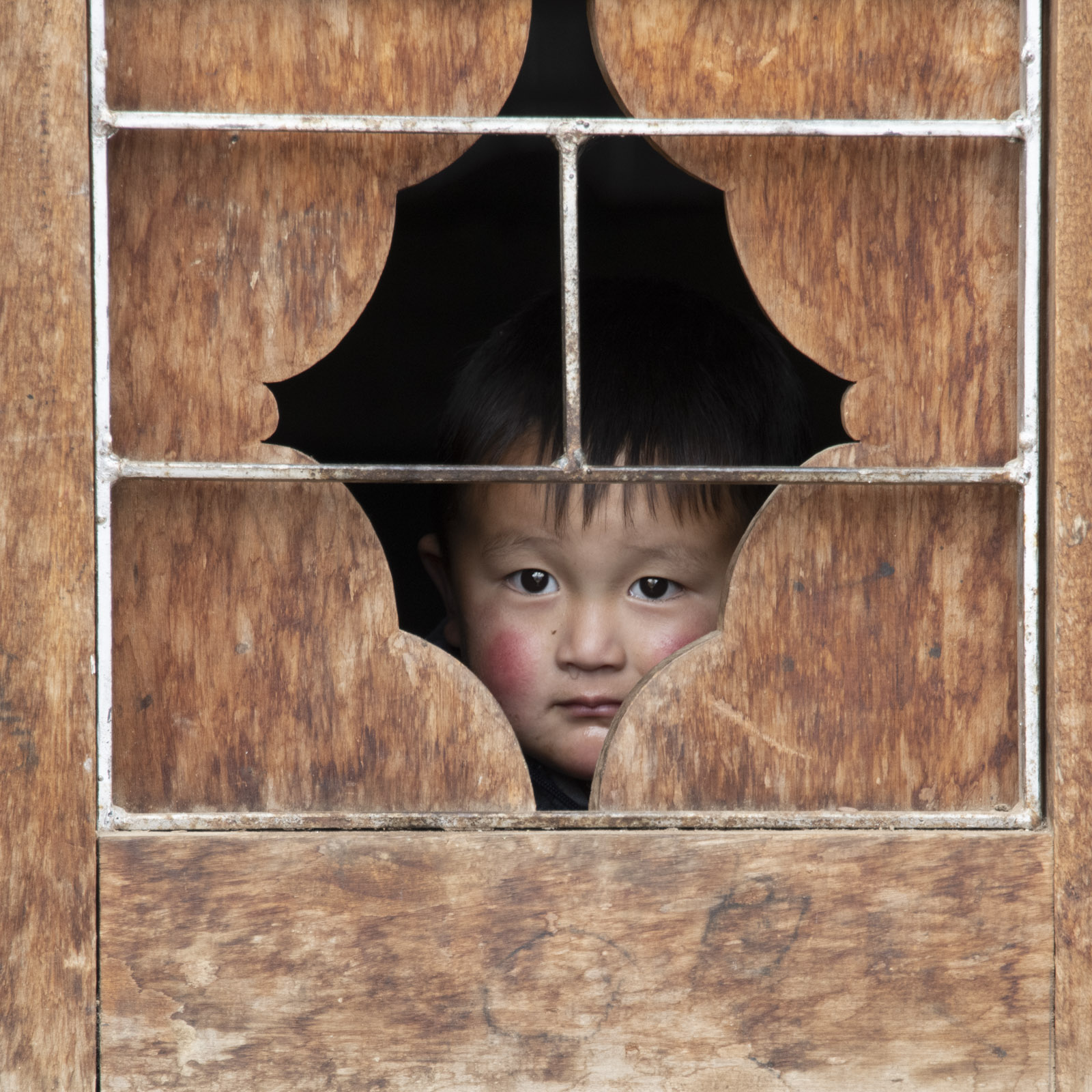 At the high altitudes in Bhutan, the air is thin and dry with low levels of oxygen. The bodies of children raised here compensate by producing more hemoglobin. The intense UV rays also have an effect. This shows up in their cheeks. While the children look beautiful, efforts are being made to introduce sunscreen and educate the people about the dangers of too much sunlight of this intensity. 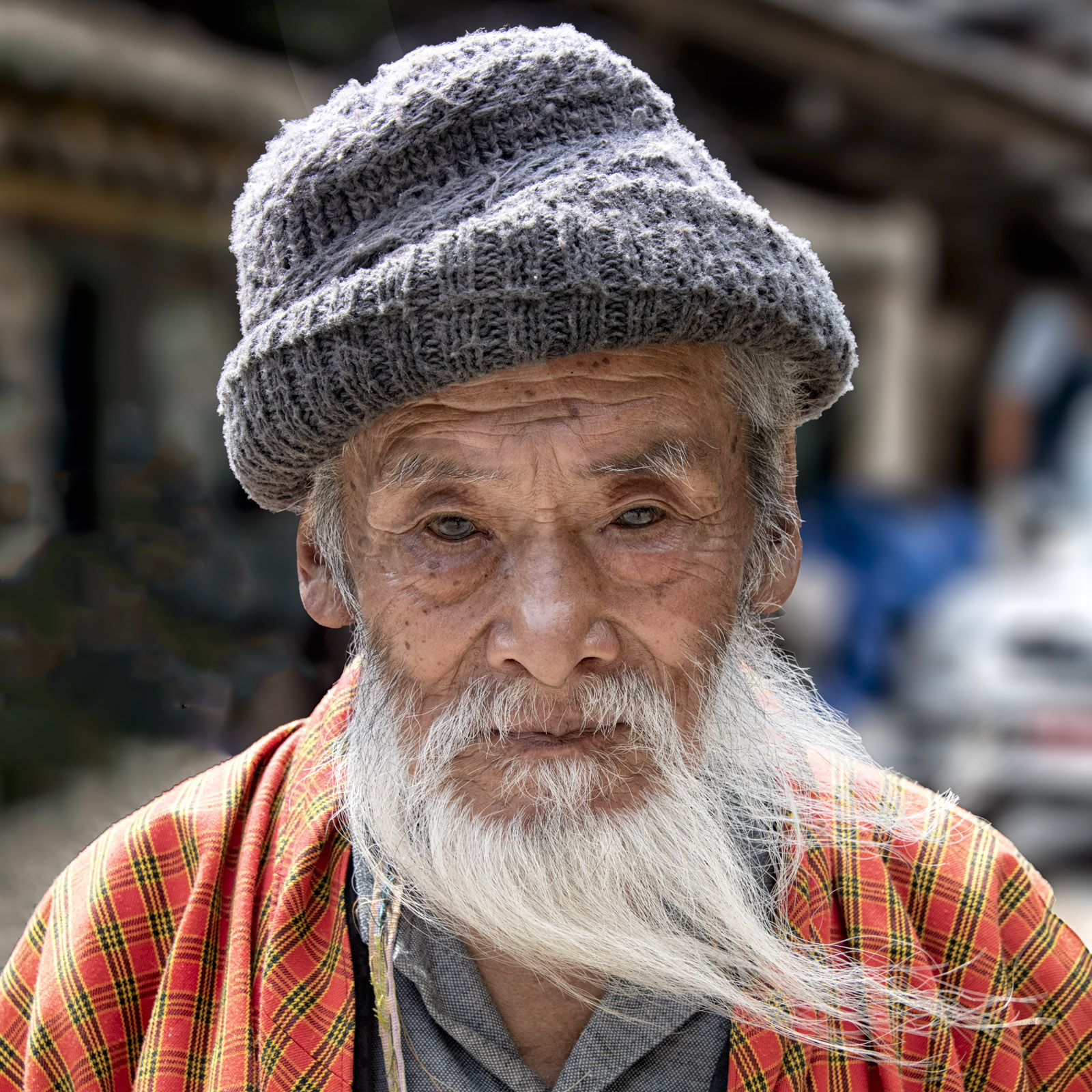 Rockslides and washed out roads are a common occurrence on the few roads that cross the country. While driving to one destination, a roadblock was set up in a very small village. We were told that a rockslide had closed the road and it wouldn’t reopen for about five hours. Before deciding to backtrack to our previous town, we walked around this village. Here I met the oldest man in town. I loved how the breeze blew his beard to the side. 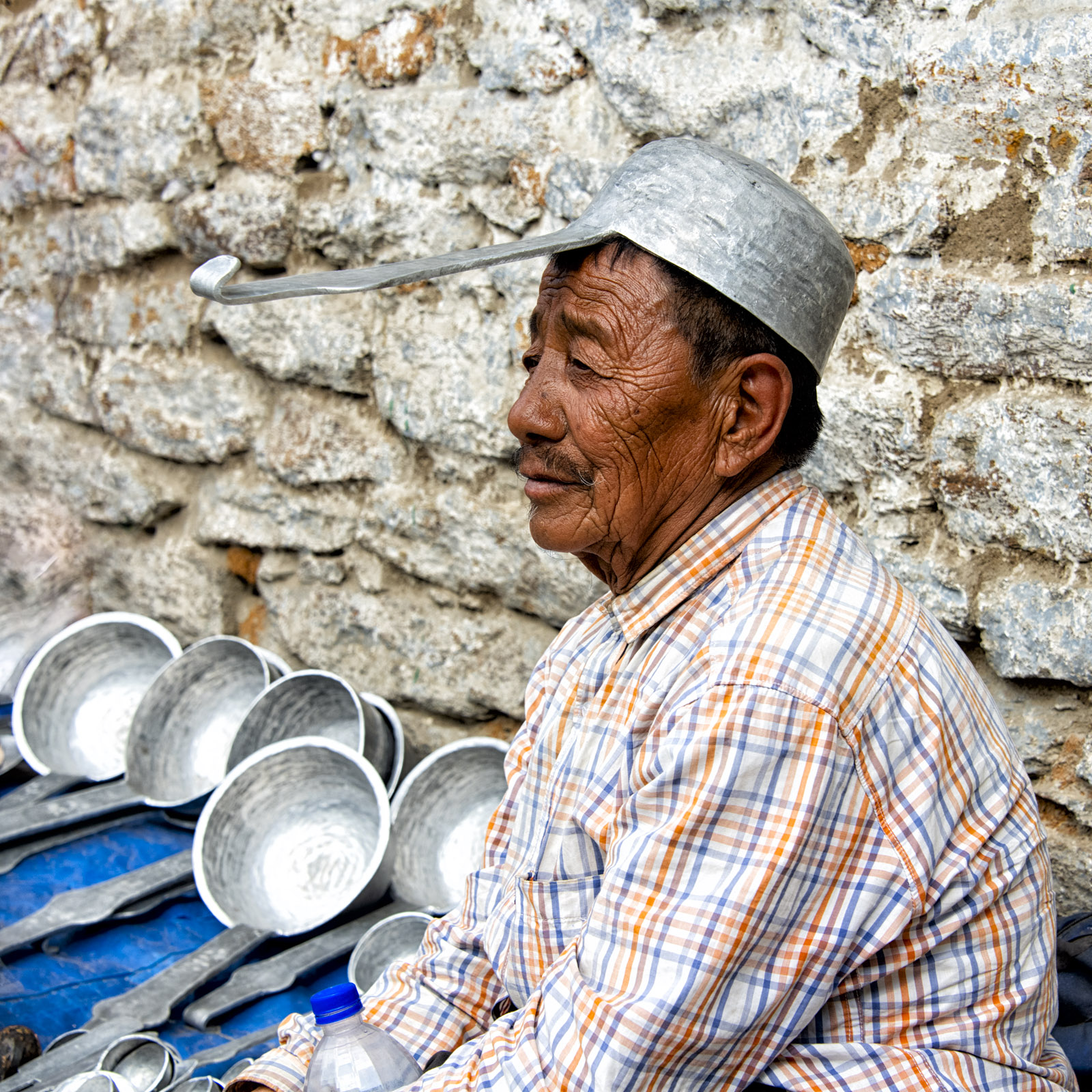 In Trashigang, the most western town I visited, there was a small section of town with street vendors selling their wares. This man had a novel way of advertising the hand-made pots. 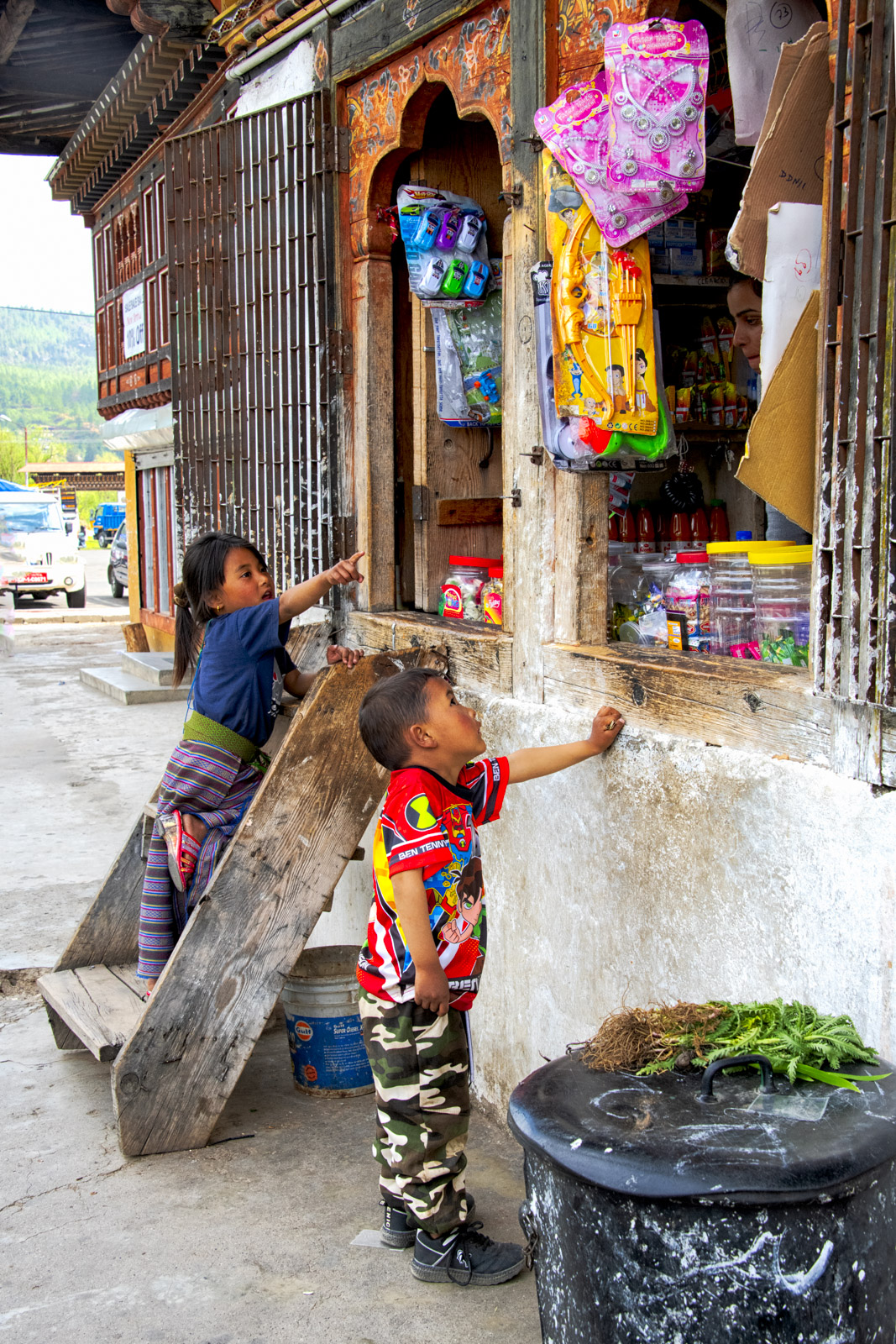 The reaction of children to a toy store is the same whether in Paro, Bhutan or New York City.