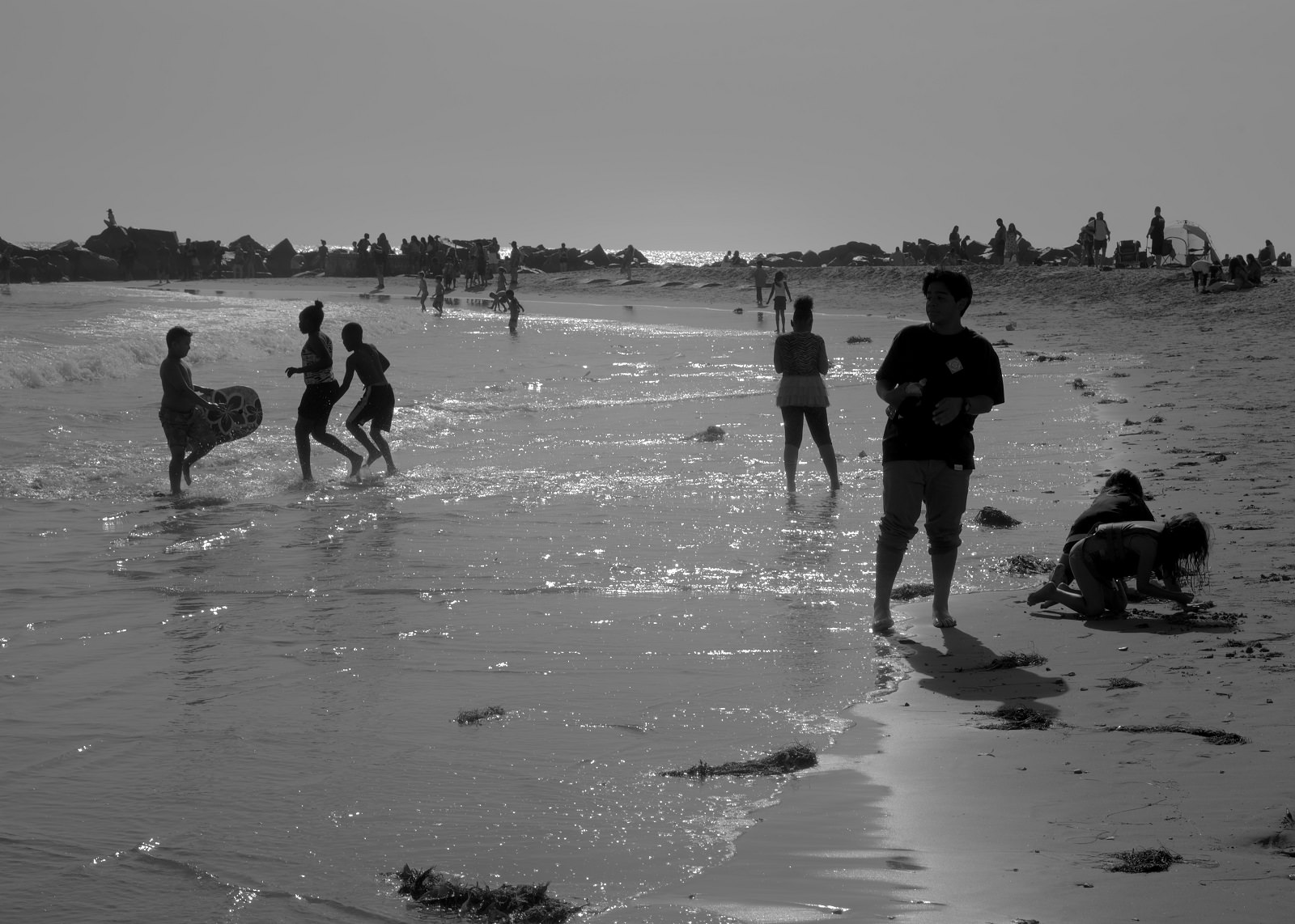 I didn’t pick up a camera till a few years ago. I’d just moved to California. But right away I wanted to shoot the street. Except, strange as it may sound, I didn’t know where the street was. I’m an ex-New Yorker. I’d grown up in an intense, immigrant Italian neighborhood in New York. It had defined what the street was for me. And Marina del Rey, where I now lived, didn’t look anything like that. It took me a while to realize that the street world here in California where I was living really was the beach world of Santa Monica and Venice Beach. This was close to my apartment. I could bike or walk there. And in the beach world of promenades and piers, shops and bright sun, I found, as I say, a new street world. 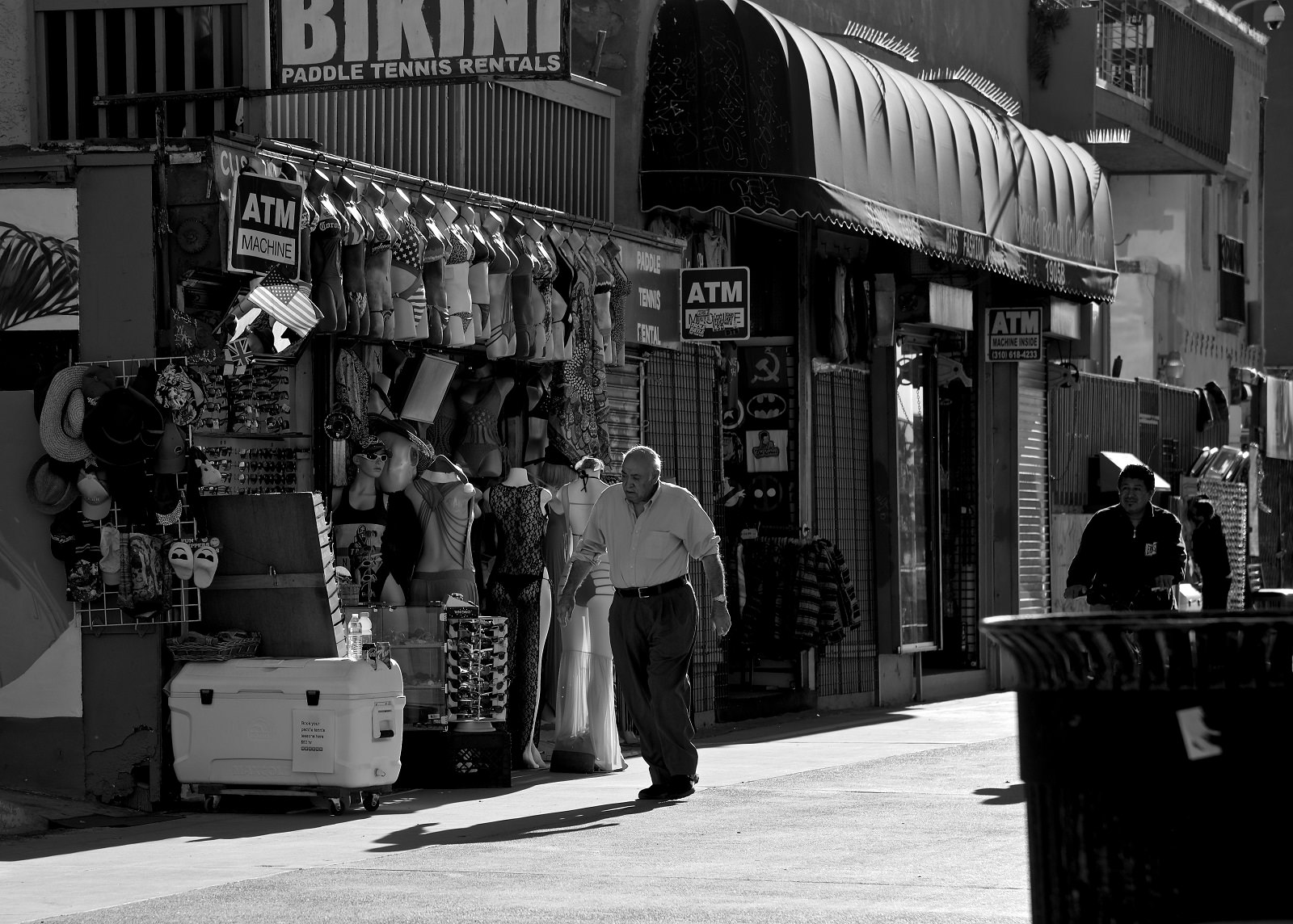 I took some getting used to. The light alone was a whole different thing. In New York the sun is different. The tall buildings block it frequently from beating down on you. But in Santa Monica and Venice Beach the sun is fierce. And it bounces back up at you off the sand. As if it were telling you photos are impossible here.

Besides the light, there also was the whole beach culture that was different from anything I’d known. It was in large part a tourist culture. You had an endless line of shops along Venice Beach, catering to tourists. You had street performers doing the same. In some respects this was similar to New York. You certainly had crowds of people there along with street performers. But the crowds in Venice Beach and Santa Monica were different, say, from the crowds in my old neighborhood in New York. The crowds in New York were all rooted in the neighborhood. They lived the same life you lived. And they weren’t nearly as large or impersonal-seeming as the crowds in California. 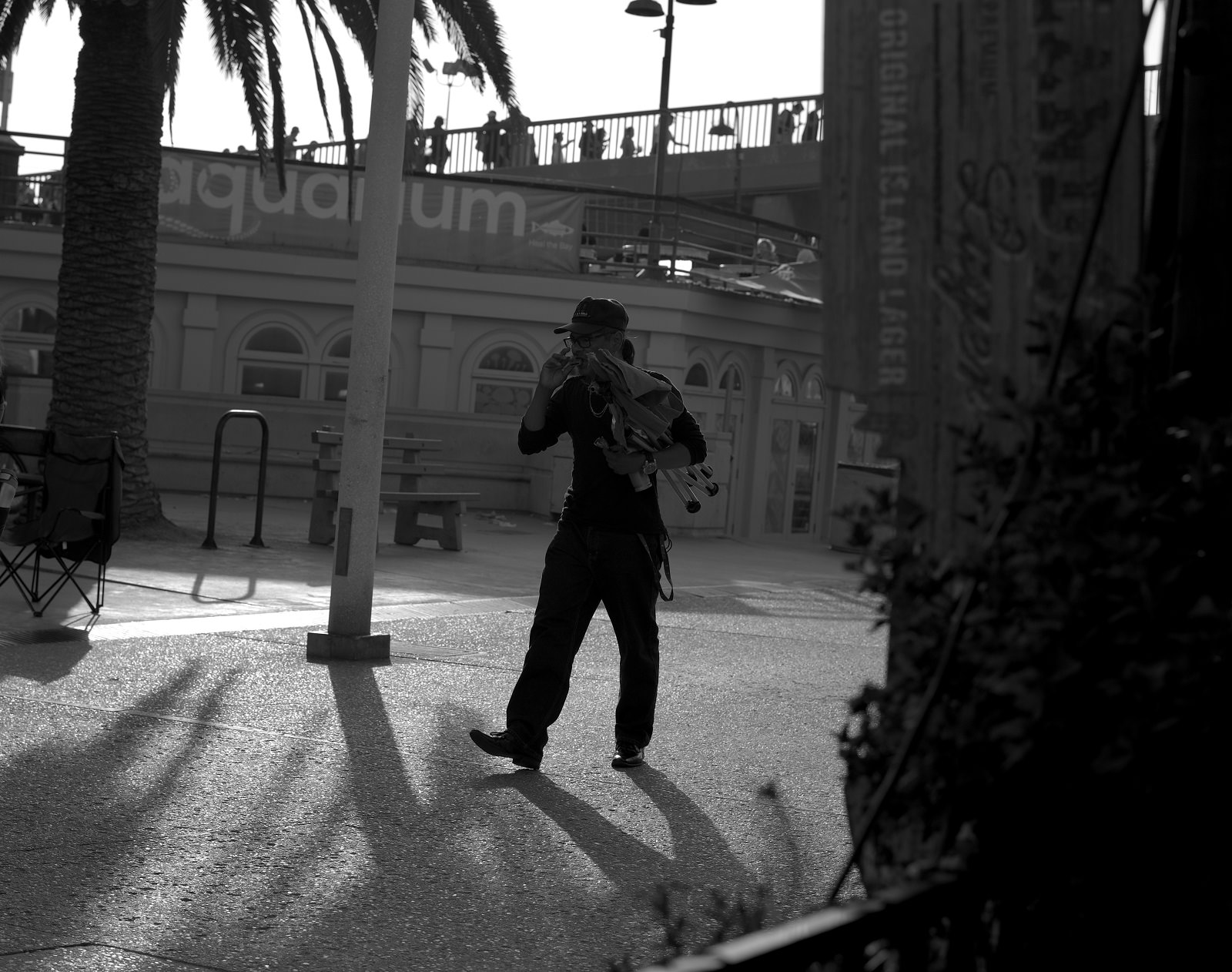 Plus you had here in California distinct beach activity: surfers, skateboarders, volleyball players, sunbathers, swimmers, folks with sailboats. You had the ocean roaring in on some days, pounding the shoreline. Creating, whether it roared or was manageable, a rhythm all its own. I set out to learn this new world. And to try and figure out how to shoot it.

The first problem I had to overcome was the light. This it took a while to do. It also took stepping up to a better camera and lens. I finally settled on the Nikon D750 and the Nikon 58mm 1.4 lens. With this combo in time I was able to better manage the overwhelming brightness. And yet I wanted to do more than just that. The Nikon D750 is a full frame, digital camera. I wanted when I shot with it to produce what I considered a slightly un-digital look. I wanted, if possible, a soft, vivid, natural look. Because that’s what I admired in the film photos of great artists like Cartier-Bresson. Luckily for me the Nikon D750 had a nice tonal range. And the Nikon 58mm 1.4 lens was designed not so much for sharpness as for a soft, vivid look. So in time I was able to produce the kind of image I wanted. 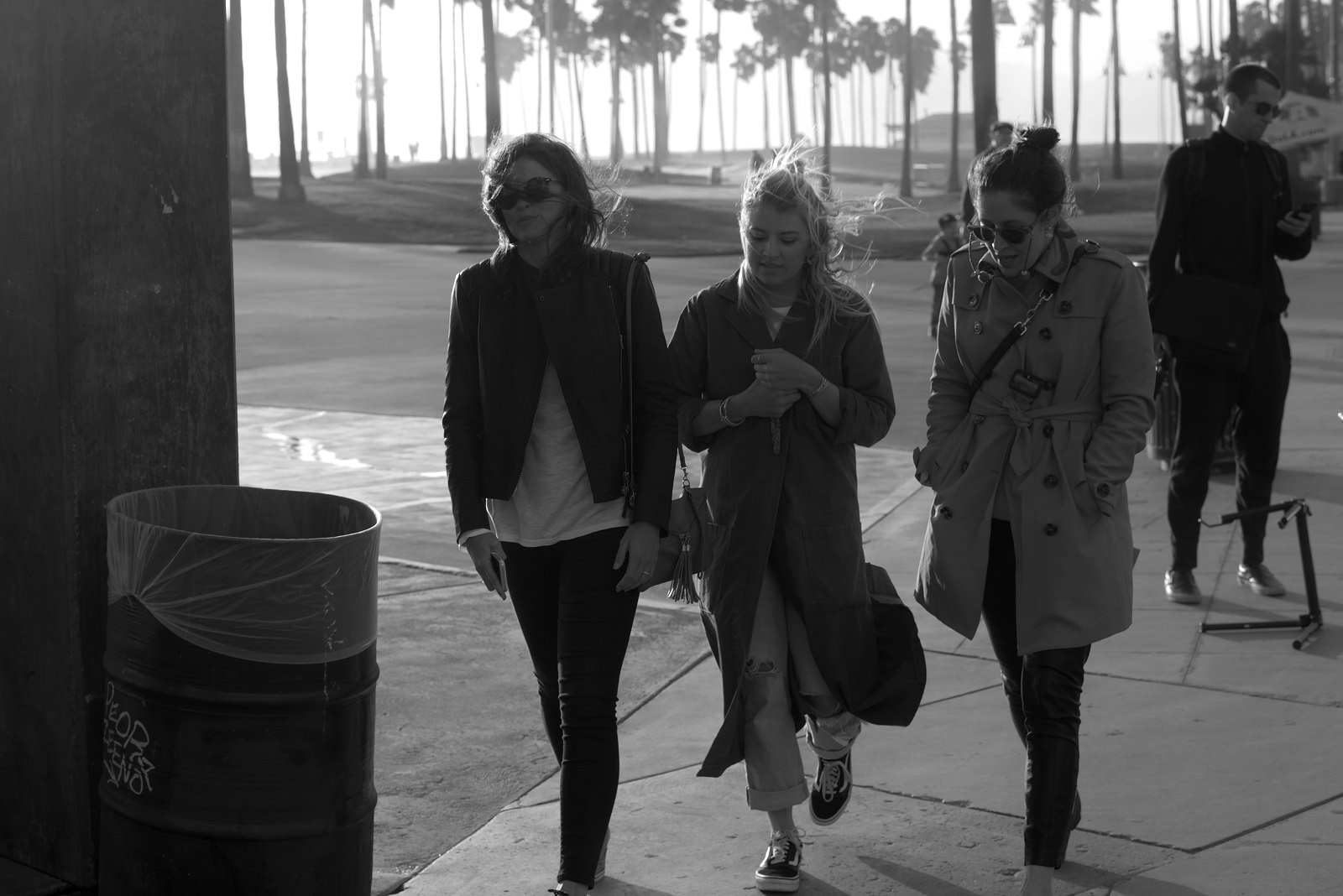 The challenge then was learning to be at ease in my new world, learning what to shoot and why. My subject matter was this new street world and I had to learn to see what was significant, what wasn’t.

I think that another thing that impressed me about the great, old film photographers from Cartier-Bresson’s time is the way they shot ordinary moments and showed you, in fact, how extraordinary they were. They would shoot simple things but bring out a vividness and intensity in them. Because of the way they shot. I never thought, of course, I’d approach the greatness of a Cartier-Bresson. But there was something in my own nature that approved of this approach. Simple things, I thought, often did contain not-so-simple beauty and meaning. I believed that from my own experience. And then I’d had the great advantage of seeing how a master in photography could actually pull that off. 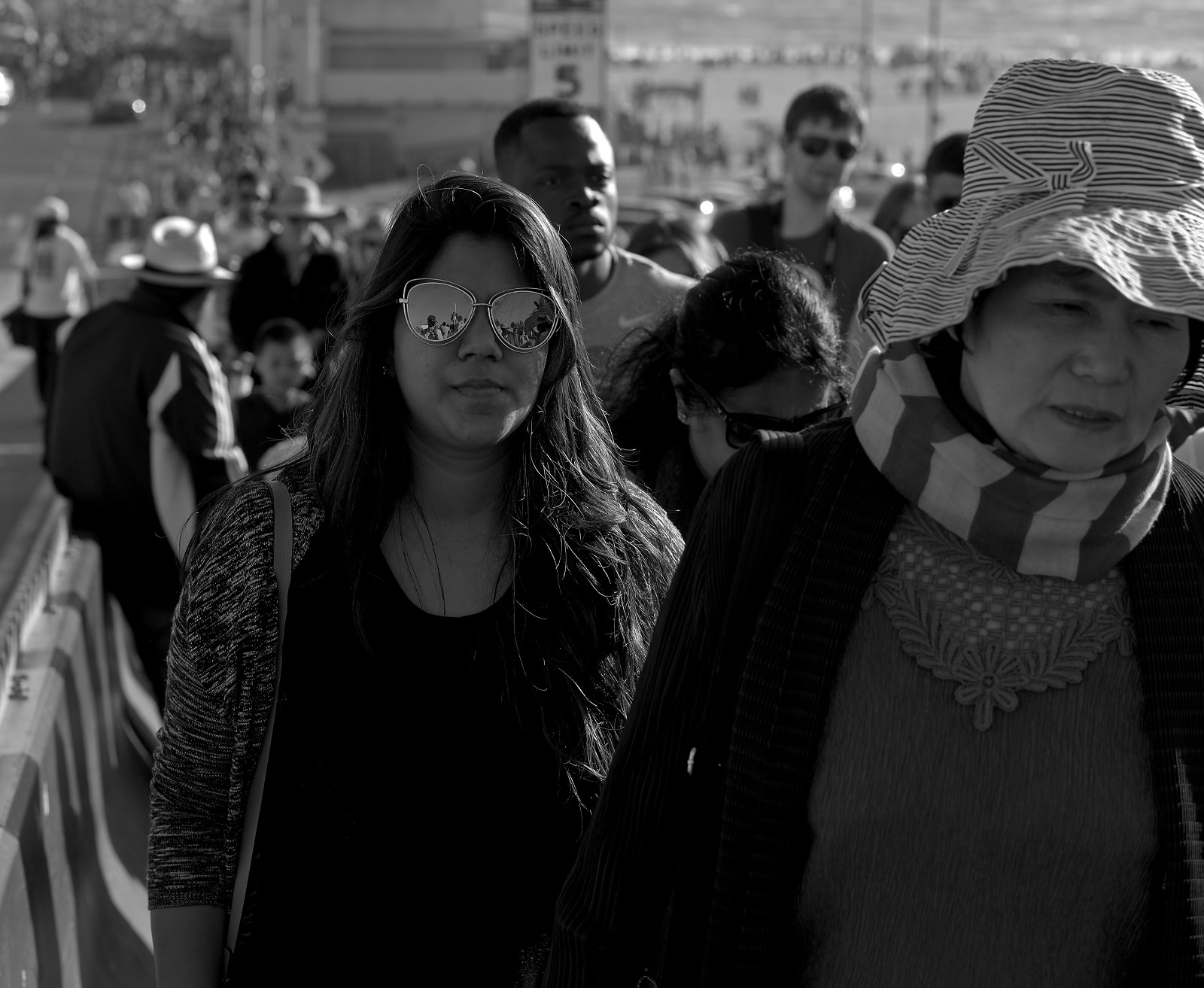 I started producing photos that I kind of liked now. What struck me about them was they did seem to have a soft, vivid look. Yet they also showed the great, contrasting light and dark that is a key feature of the beach. It was satisfying to get that effect–a soft, natural look but also the extreme brightness and shadow that characterizes the beach. The truth of the matter, however, is that I never appreciated that fact about the beach until I took these photos. What I mean is I wandered the beach and promenade day after day only aware of the extreme, dazzling brightness. Not till I started shooting did I realize there was almost a shadow world that coexisted with the sunniness. And I remember the photo that made me realize this. It’s a shot of the skateboard arena at Venice Beach. I took it late in the afternoon. But late in the afternoon the sun is still strong at Venice Beach. 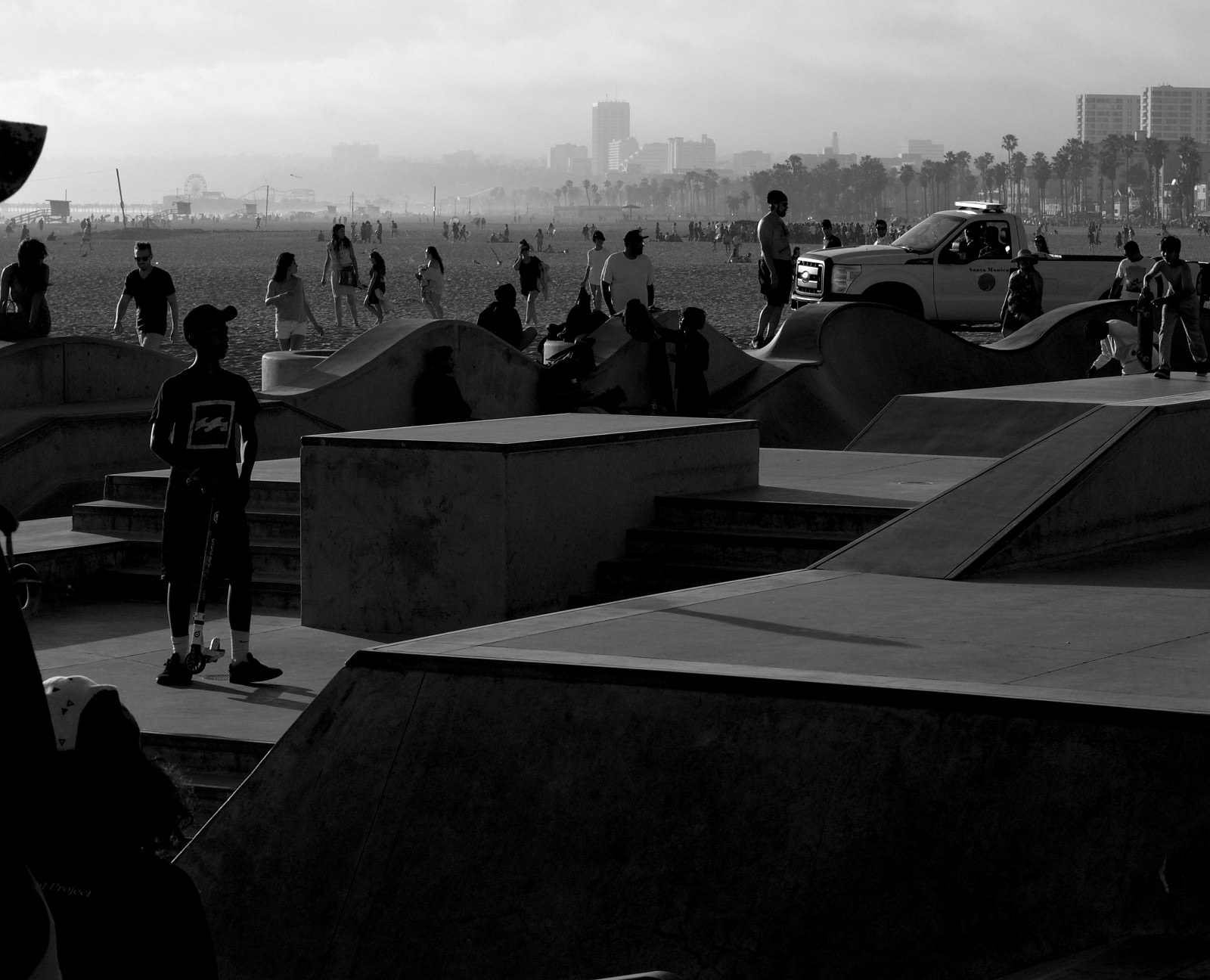 Yet the photo, when I saw it, surprised me. It’s got dark, hugely bulky geometric shapes. It’s got half-lit men and women, lingering with no apparent purpose. And it’s got a dim, misty horizon light. All in all, the shot seemed to reveal a strange, shadow world. Almost as if it were showing you an alternate reality. Over time, as I took other shots, I kept being struck, again and again, by the same fact: the shadowiness of people and places when I shot them in fairly bright light. I was using, all during this time, Nikon’s highlight metering system, which is designed to tame high-contrast brightness. This for sure helped me get this effect. But it was an effect that for me had a deeper meaning.

The deeper meaning for me was that behind the obvious, bright, well-defined world we think we know is something else, something hidden. If you could find it in your photo, I thought, you’d have something interesting. So that’s what I tried to do from this point on with all my shots. Find the hint of hidden meaning, that shadow meaning. 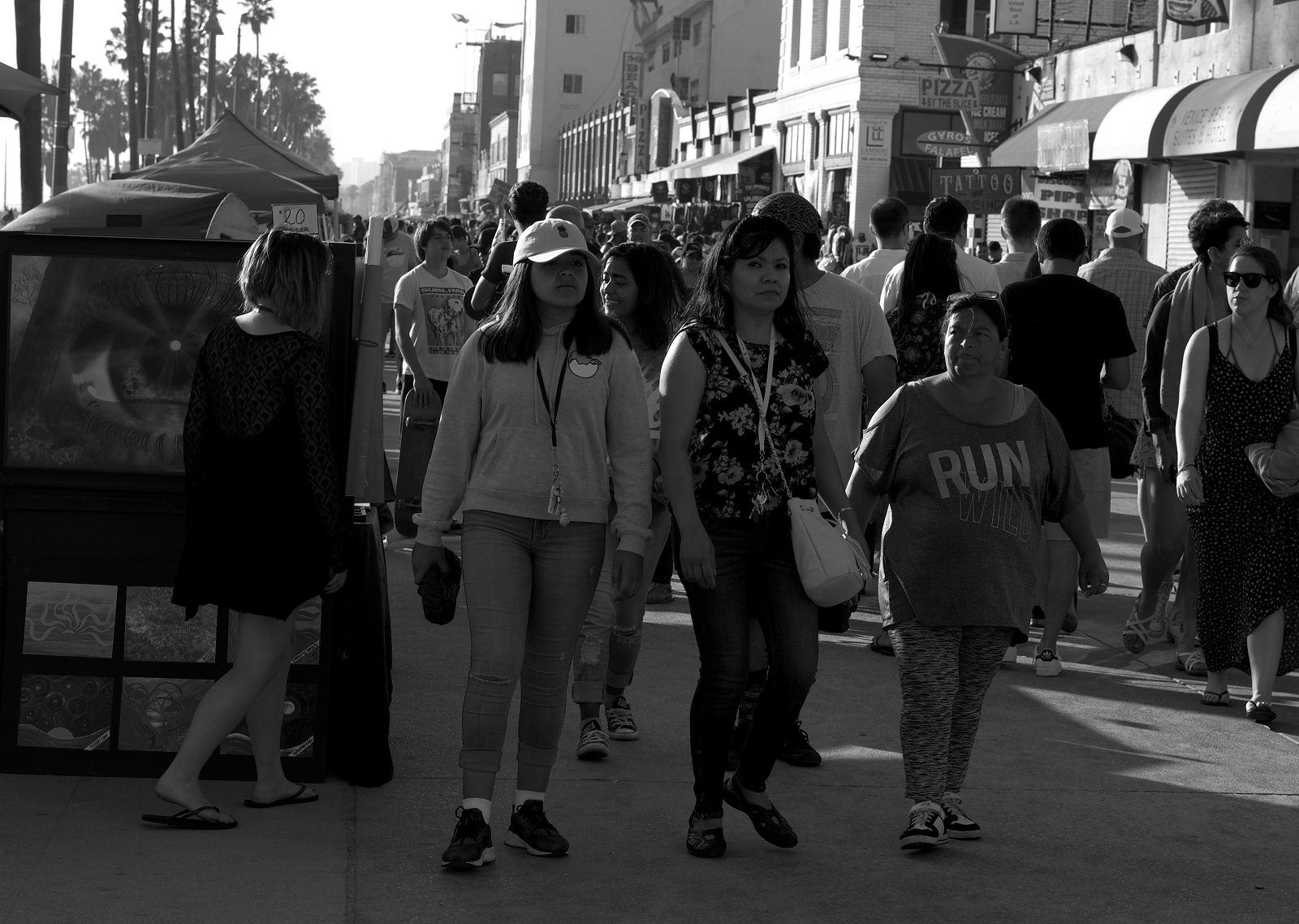 I look at my little project of shooting Venice Beach and Santa Monica as a kind of experiment. An experiment in light. The peculiar beach light of these places affects everything, I think. It effects what you see and don’t see. What you know and may have to learn by looking deeper into something. That’s how I see it. It was also, I think, an experiment in whether I could learn and accept a new kind of street life. And I have to say, all in all, it’s been a very exciting experiment, full of surprises and unexpected realization. For which I’m immensely grateful.