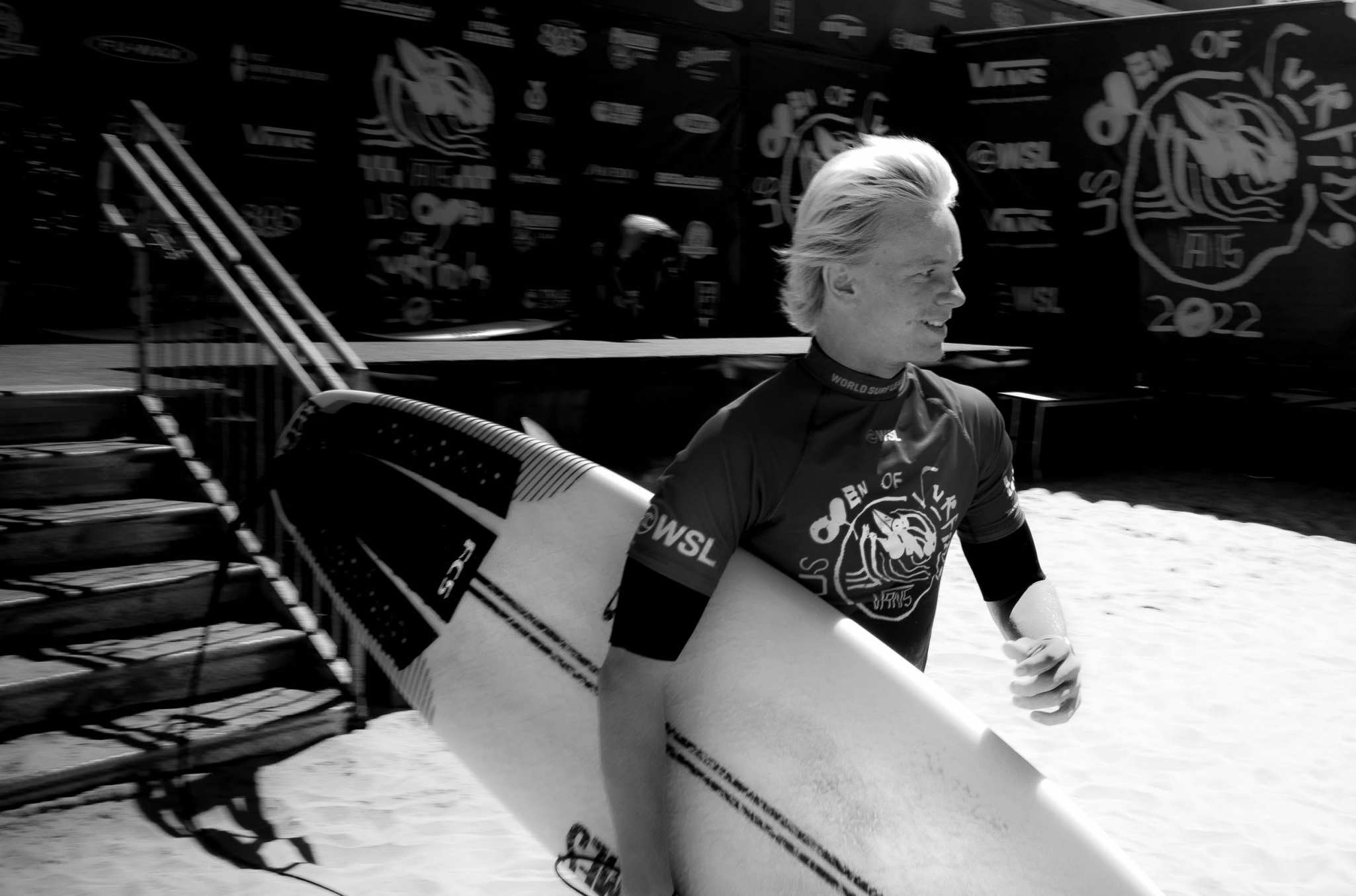 Here’s a link to Karl’s recent podcast interview about how he created the project in this article. You can also find it on the Street Photography Magazine podcast on iTunes, Google Play, Spotify, Stitcher and most other popular podcast directories.

At the end of July and beginning of August I took my camera and two prime lenses, a 35mm and 28mm, to Southern California to capture candid street photography-type portraits of participants at a major surfing event. Usually at these kinds of events photographers use tripods and 400mm or 600mm lenses. I wanted to shoot close-up and be different in my approach by not positioning myself on the beach and taking photos of surfers riding a wave. I witnessed 100+ photographers doing that. Instead, I stationed myself behind the scenes.

The U.S. Open of Surfing is a week-long surfing competition held annually during the summer in Huntington Beach. Held on the south side of the Huntington Beach Pier, the U.S. Open is part of the qualification process for the World Surf League. It is the largest surfing competition in the world, open to both amateurs and professionals. Typically, 200+ surfers compete in the event every year. It has been owned by International Management Group (IMG) since 2000 and attended by nearly 500,000 people annually.

The U.S. Open, originally called the West Coast Surfing Championship, was first held in 1959. In 1964 it became known as the United States Surfing Championships. In 1982 it became known as the Ocean Pacific (OP) Pro and then renamed the U.S. Open of Surfing in 1994. As part of the event, notable people in the world of surfing are added to the Surfing Walk of Fame and to the Surfers’ Hall of Fame, both directly across from the pier.

My initial intent was to obtain a media pass for access to the VIP area, participants holding area, backstage, the podium stage, the interview areas, etc. It seemed straightforward enough to get a pass, but alas it wasn’t. The reality was that the World Surf League (WSL) who is responsible and produces for over 20 worldwide events a year, has a process to apply for credentials. I was on-line 4 months in advance applying on the WSL website and started calling as a follow-up, but never heard back from them. Eventually they forwarded me to Make Waves Media and I started the application process again.

It turns out that the Huntington Beach US Surfing Championship event is run by a number of other entities such as Endeavor, IMG, Trans-World International, Vans, Getty Images, and Make Waves Media. The WSL is not involved with the production, security, filming, media passes, interviews, organization or logistics. WSL is just a sponsor and contestants gain points to join the WSL tour.

It wasn’t till I got to the event that I learned how it all actually works. I did get a media pass for the media tent which was set up for web sites, bloggers, and special access between the chain link fences and the orange cones. Basically, an emergency road separating the surfers from the public when they are not in the water. Last year the event had an incident, so this year there was increased security, including plain clothes policemen. And, of course, more rules.

My media access to skateboarding was denied, BMX denied, surfing participants backstage and VIP area also denied. All needed special requests in advance to different entities. I did get granted an editorial photography assignment waiver for Street Photography Magazine. However, if I want to use my photos commercially in the future, I’d need to get a sign-off from Getty Images. I noticed there were a total of five different media passes and I only had the one. I witnessed maybe five others photographers near the fences with the same wrist band.

Shooting during peak sun hours with sand as a dominating background made finding exposures a little more difficult. Even though the sun was directly overhead, different exposure compensations were needed if facing North vs. South or East vs. West. Exposure for the primary subject’s face and skin was always paramount. I tried spot metering but settled with center-weighted.

My advance staging for a shot was always test metering by taking samples at my envisioned focal distance, considered zone or manual focus. Then I’d review the background where the subject would stand out and hopefully, with a secondary subject in the scene, anticipate what motion will occur. Other factors include shutter and aperture selection, auto white balance, ISO set at 200. Nevertheless, when spontaneity presents itself, just shoot and break the rules. This event required a different kind of street photography, closer to sports photography. All in all, I enjoyed the challenge of working through all the restrictions, and loved the results.