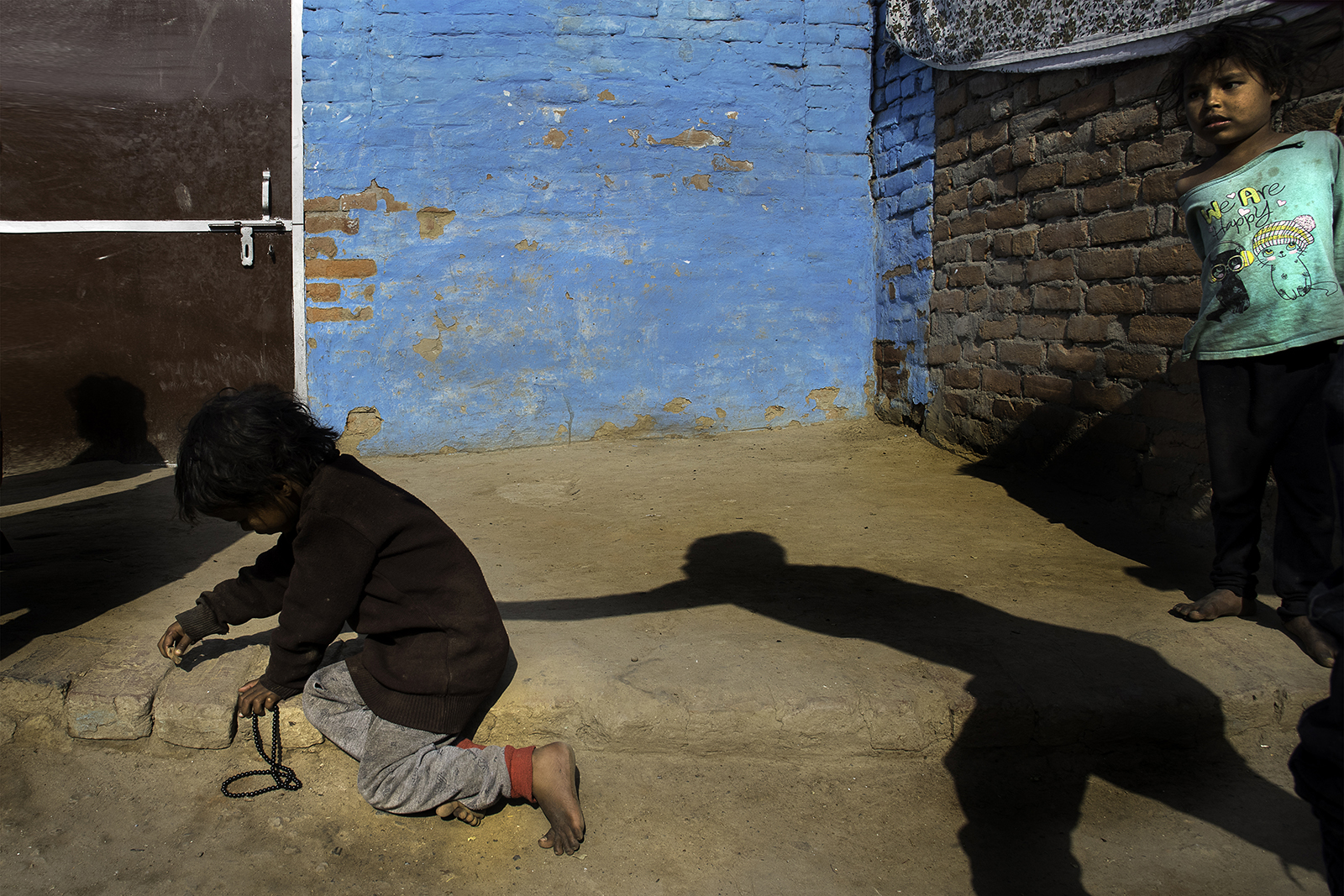 A gesture of the hand is a form of non-verbal or non-vocal communication, which expresses feelings, emotions, thoughts, messages and many more things. This body language expresses blessings, power or a gentle feeling of fondness. Sometimes a hand gesture embodies a Mudra. A commonly found Mudra is often depicted in Buddhist art which signifies the act of teaching or reassurance.

Representation of such hand gestures are visible in various art forms across the world. Great Italian painters Raphael or Leonardo da Vinci painted such hands. They are even present in Ajanta Ellora cave paintings.

The collection of images in this series, “A Handful of Hands” portray a wide range of human emotions and a visual harmony with the help of such varying hand gestures.

Lord Ganesh is the Hindu god who is widely revered as the remover of obstacles, the patron of art and sciences and the deva of intellect and wisdom. He is the god of beginnings, who is traditionally worshipped before any major enterprise and is the patron of bankers and businessmen. In the above picture, the juxtaposition of the hand of Lord Ganesh and the tall light post behind gives a sudden feeling that Ganesh is enlightening the sky to help the airplane fly.

A gesture of hand sometimes signifies a sign of uncertainty and danger. The hand of the foreground shadow in the top image imposes uncertainty on to a child. The approaching hand makes the viewer uncomfortable too. Shadow play, background colors, presence of a child in a highlighted zone brings well-balanced layers in the image, however the long hand shadow takes the central attraction. 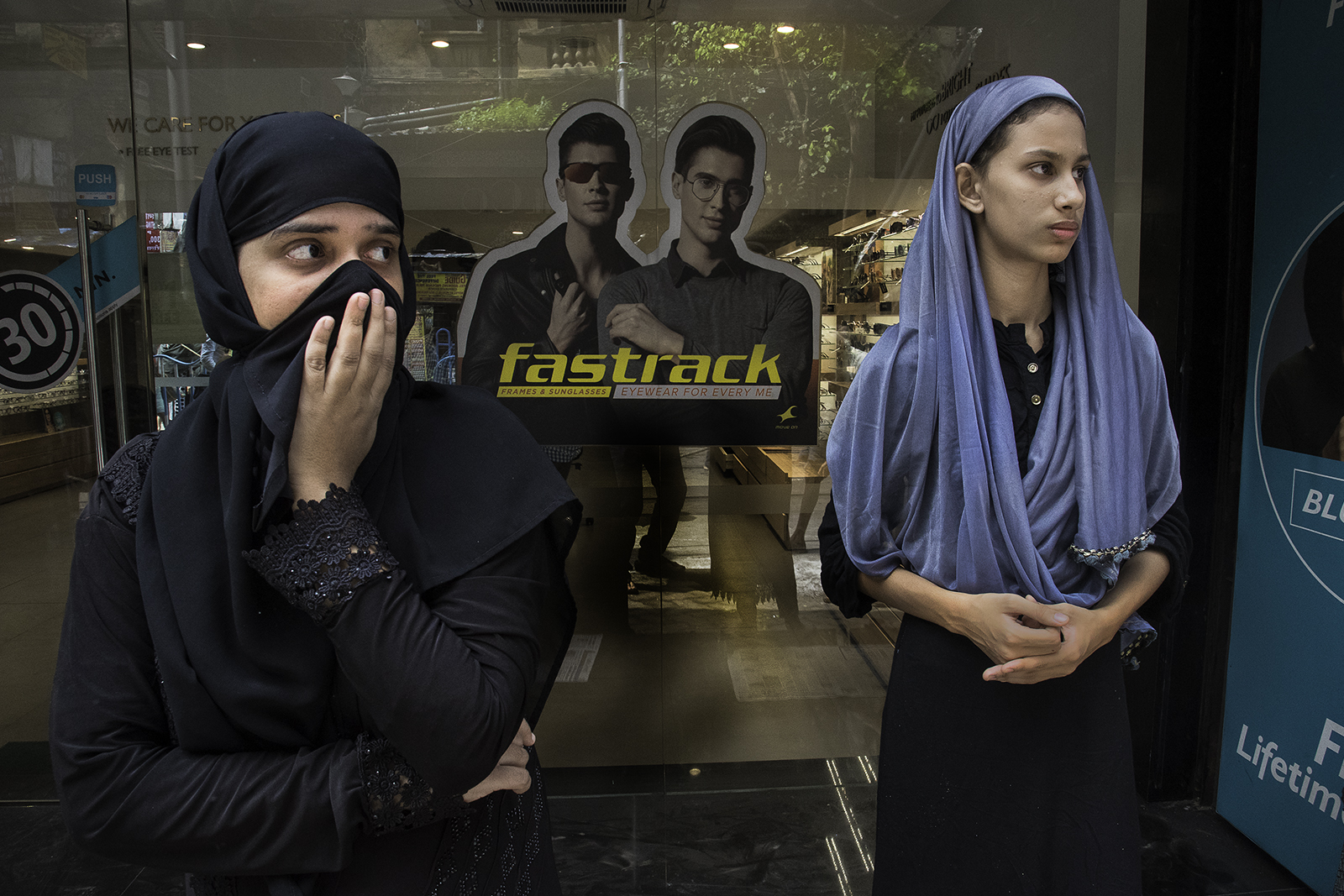 A call to the almighty by the Hindu Naga Sadhus during Kumbh Mela (a popular Hindu festival in India) is captured in the photograph below. This moment is just before the Sadhus march to the holy bath. The upward hand behind in the photograph indicates a call. The gesture of the fingers adds intense longing. The visible part of orange cloth hints at strong enthusiasm and determination. The downward hand in the foreground with a ring on the finger and a bangle on the wrist is expressing a little hindrance. In such an enormous mass gathering of Sadhus, an almost naked moving body of a Naga Sadhu is visible with his right hand holding his own left hand from behind his body, which clearly depicts relaxation and patience. 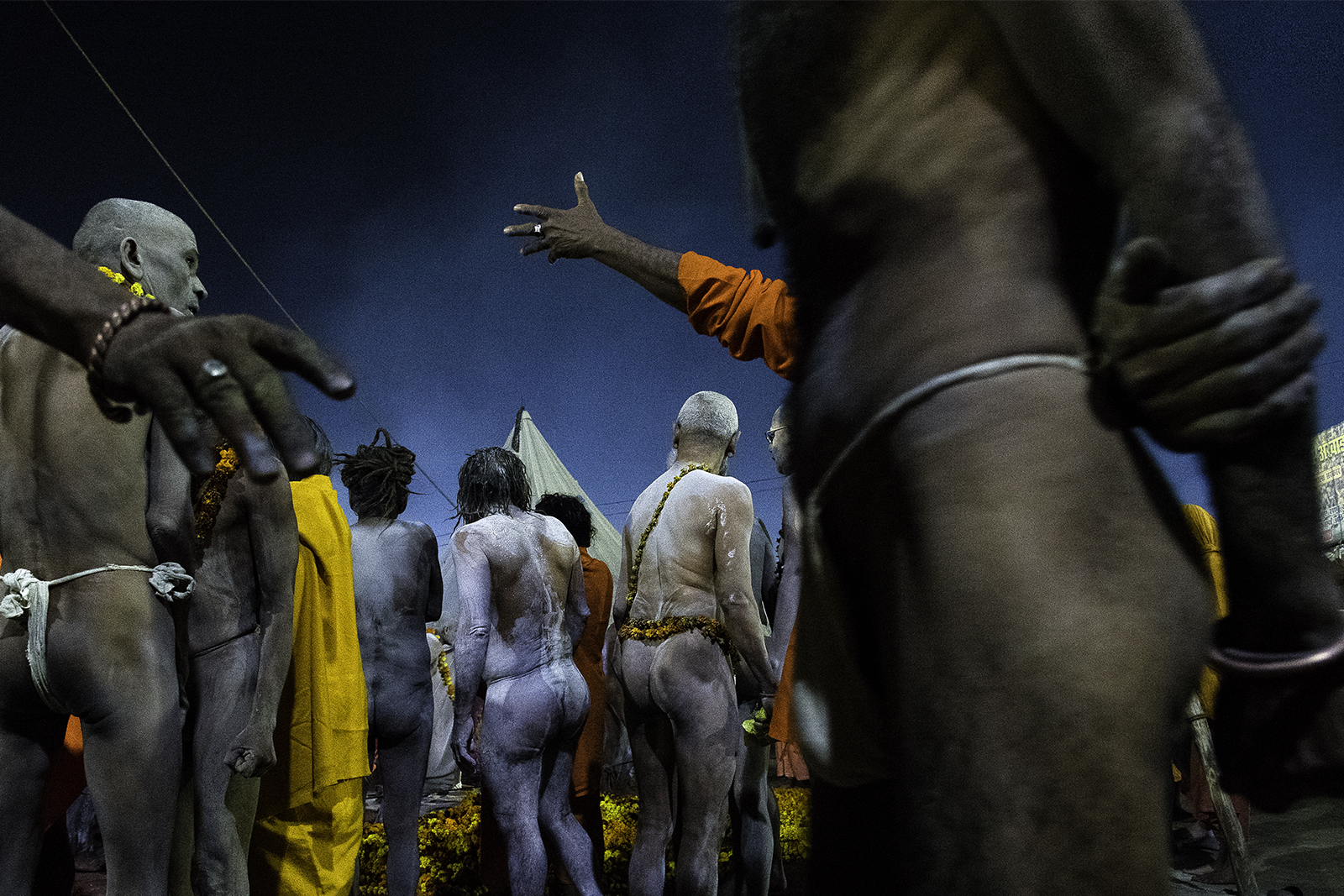 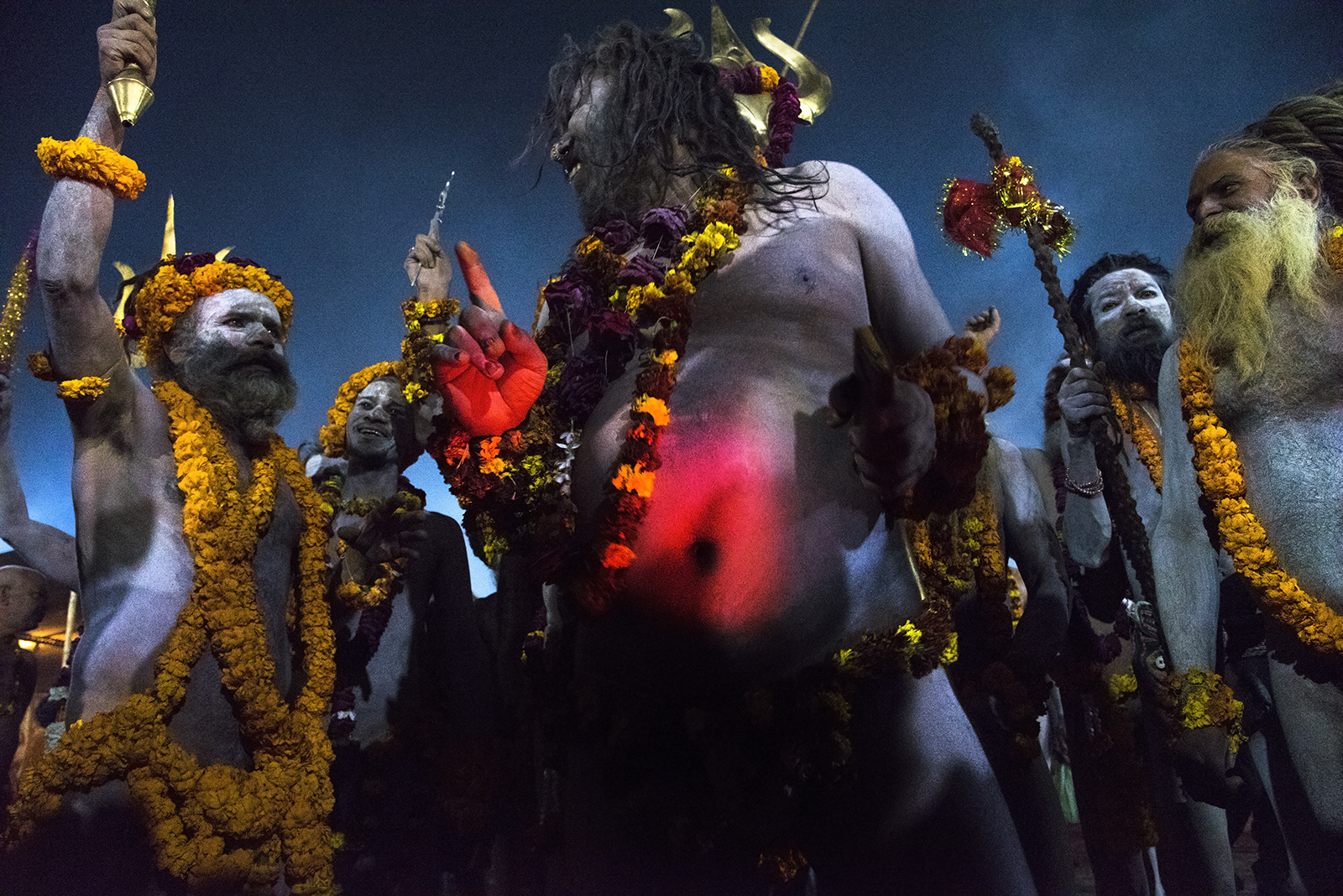 In the above image, a group of Naga Sadhus are dancing on their way to take the holy bath. The pointing finger is quite a significant mudra (in Indian classical dance, mudras are single hand or double hand gestures) which has become more noteworthy with the presence of dark red light on Sadhu’s belly and right hand. The pointing finger narrates aggression and the dark red color associates lots of energy strength, power, determination and passion with the overall environment.
While returning from the river after taking the holy bath, one Naga Sadhu is posing by stretching his long hair. In the below image the calmness is depicted in the Sadhu’s face. By widely stretching both of his arms he is holding his long hair. This symbolizes strength and enormity. The entire emotion of this image is centralized in the Sadhu’s unique hand gesture. Along with that, a pair of hands are also visible from behind, which creates a pattern and a visually pleasing mood. 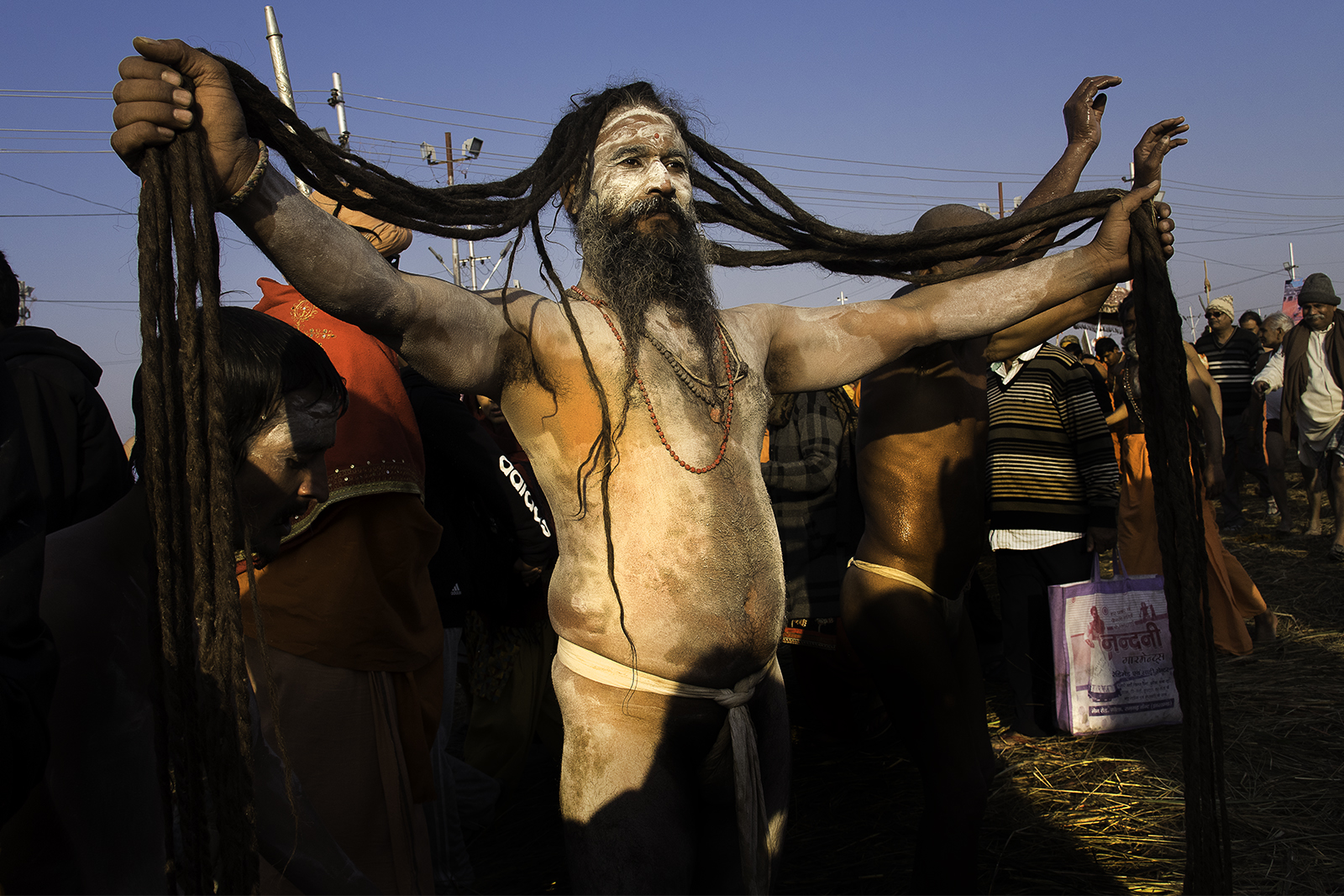 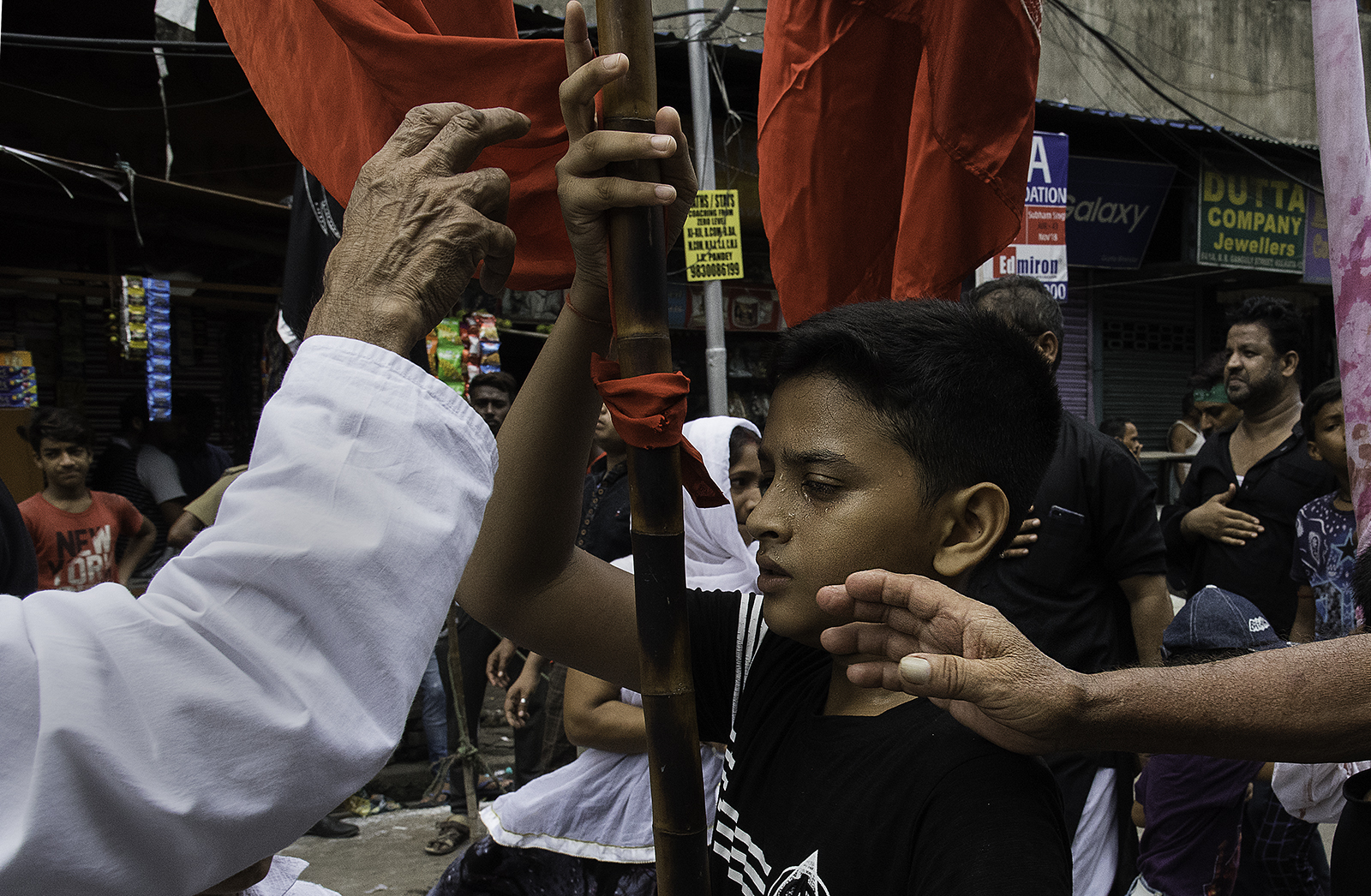 The biggest harmony of hand gestures can be seen in Muharram, a commemoration ritual observed mostly by Shia Muslims. During the mourning of Muharram, red flags are commonly visible which symbolizes the blood of martyrs. In the above picture, a young boy is carrying one such red flag in their procession of Muharram. The facial expression of the boy clearly indicates distress and the gesture of surrounding hands are denoting support towards him. In the same mass gathering, a lament movement of the hand of a fellow brother is also visible.

The extreme outburst of grief comes out when the participants started self-flagellation by blades on their bare chest and back. While they are re-enacting the battle of Karbala in below way, their hands move in symmetric direction which create a rhythm. The harmonious movement of hands make the viewer reminisce about the ancient history of the battle of Husayn. 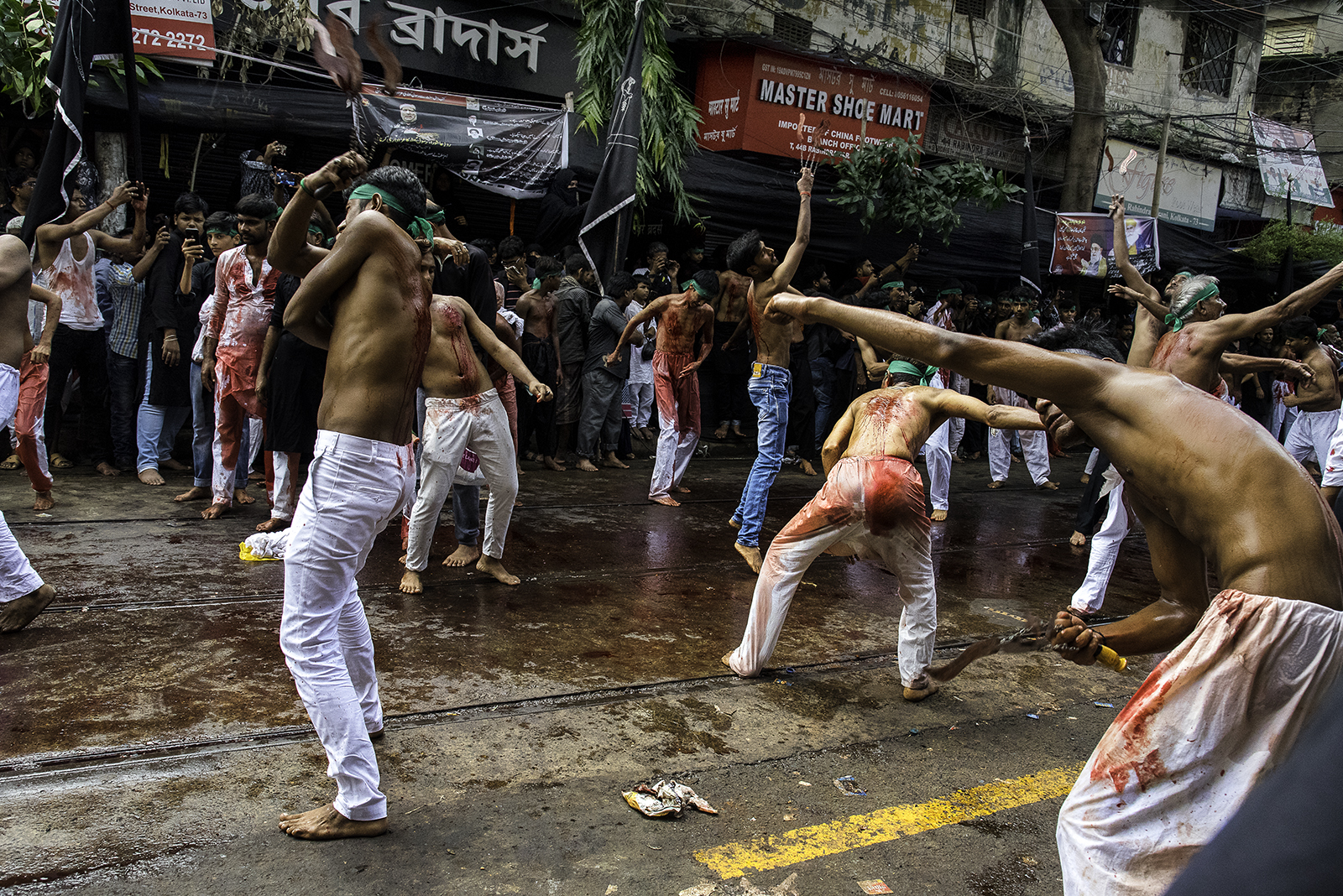 In conclusion, a few words to the viewers: Images come to me all of a sudden. I never plan for an image, it’s my intuition which helps me to capture it. Similarly, this series was also never planned, though I am not very sure whether I thought about it in my subconscious.