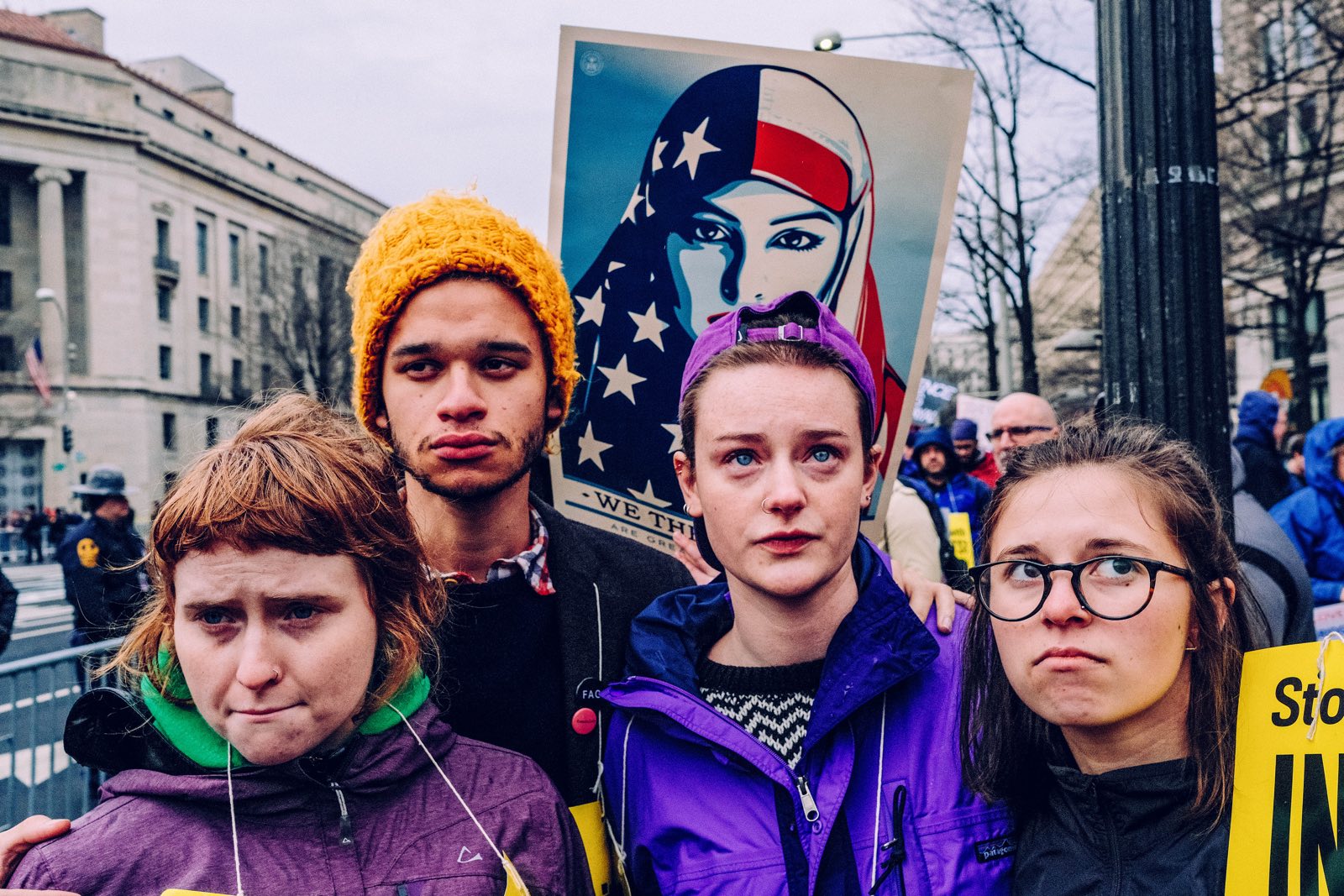 The election of Donald Trump to the presidency of the United States has unearthed a sharp divide that hitherto existed in American society, and the rest of the world at large. 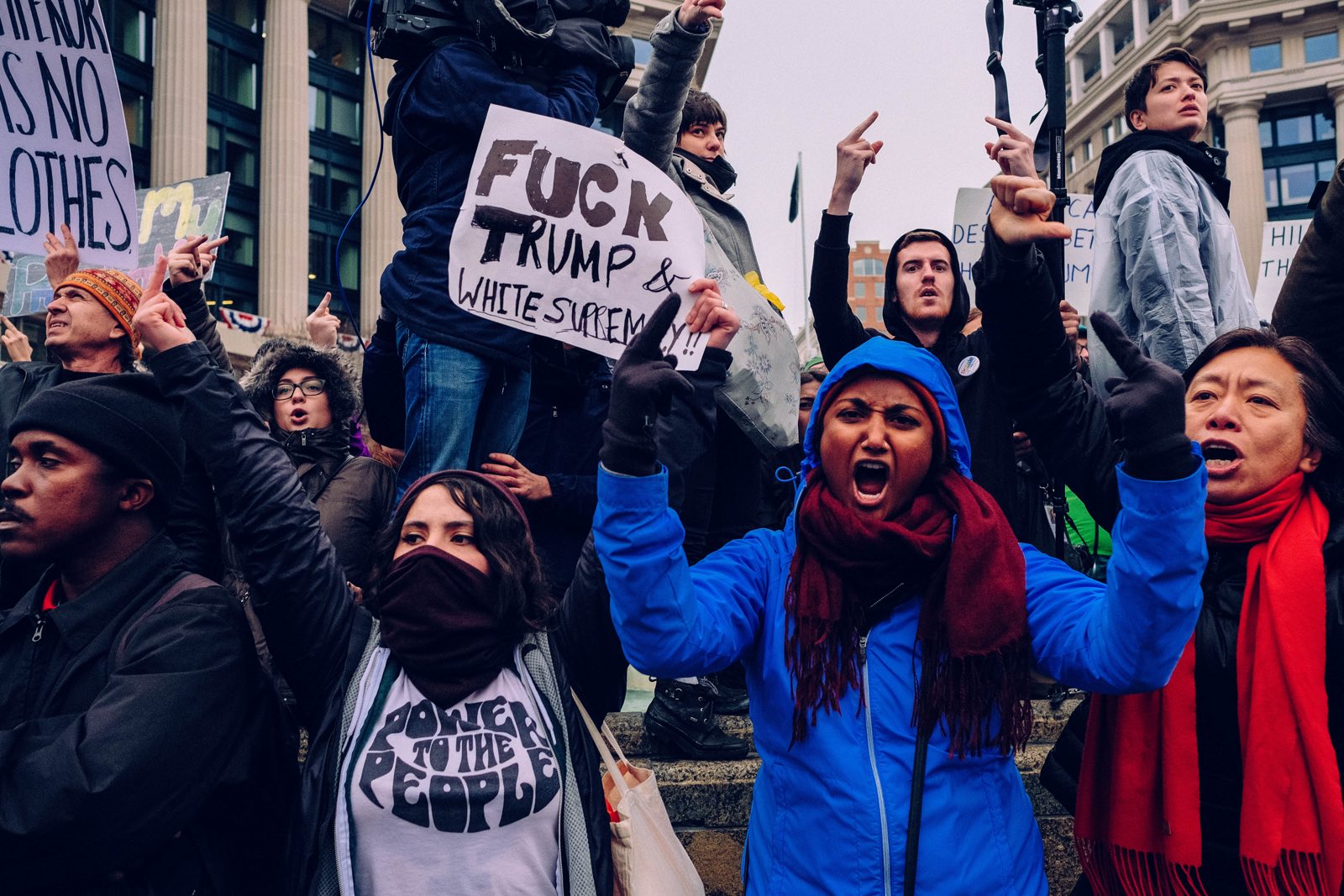 The purpose of this photo essay is to highlight the year of protests across the United States, with a specific focus on protests in Washington DC as well as events linked to the Unite the Right in Charlottesville. It is important to state that protests are not unusual occurrences in the Washington DC area, and happen regardless of which party has a president in party. 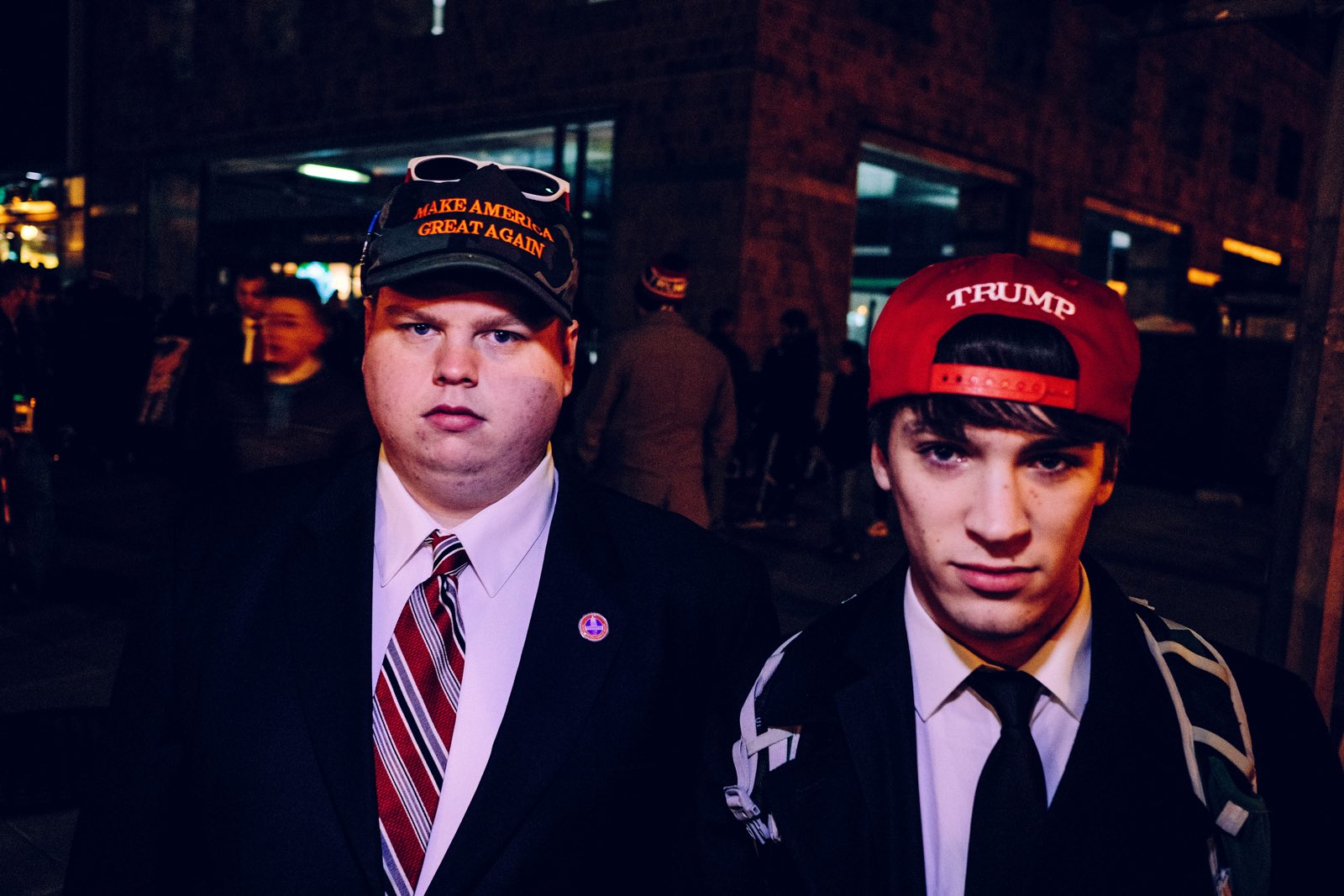 The year started of with protests and a mini riot on the day of the inauguration of the new president. The day after, there was a women’s march with over 5 million protestors across the United States of which 1 million were in Washington DC [sources: Washington Post and New York Times]. There have also been several smaller marches, such as the protests against the Muslim Ban, Tax March, March for Truth, March for Science, Juggalo March, Mother of all Rallies, Native People’s March on Washington, March for Life and several others. 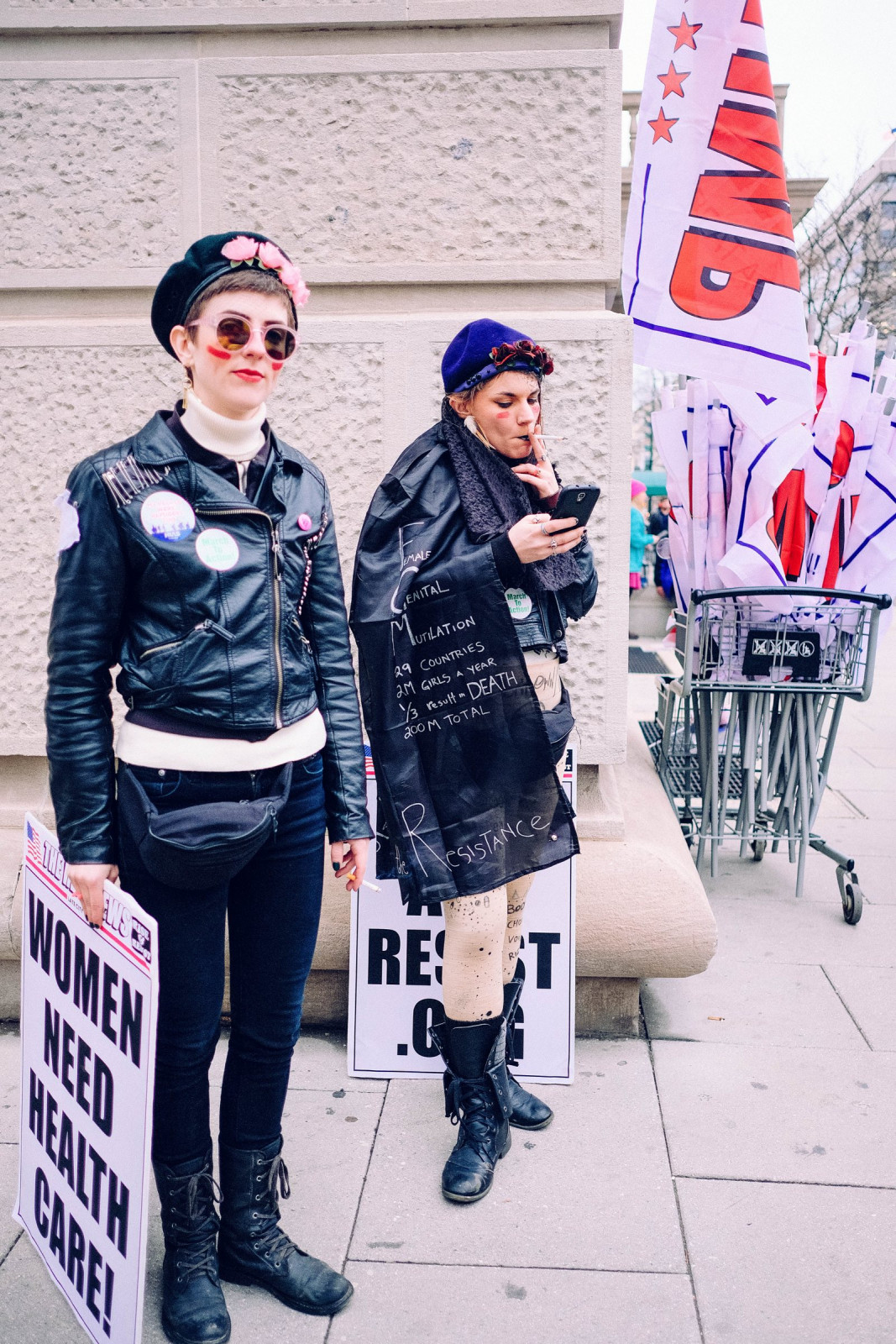 The World Economic Forum suggests that we are at the cusp of a Fourth Industrial Revolution, which will be drive by hyper networks, singularity, internet of things and other factors. More than 50% of all jobs will be automated by 2050. Many, including the poor or marginalized white people will be left behind, as described in the ‘Hillbilly Elegy’ by J.D. Vance. 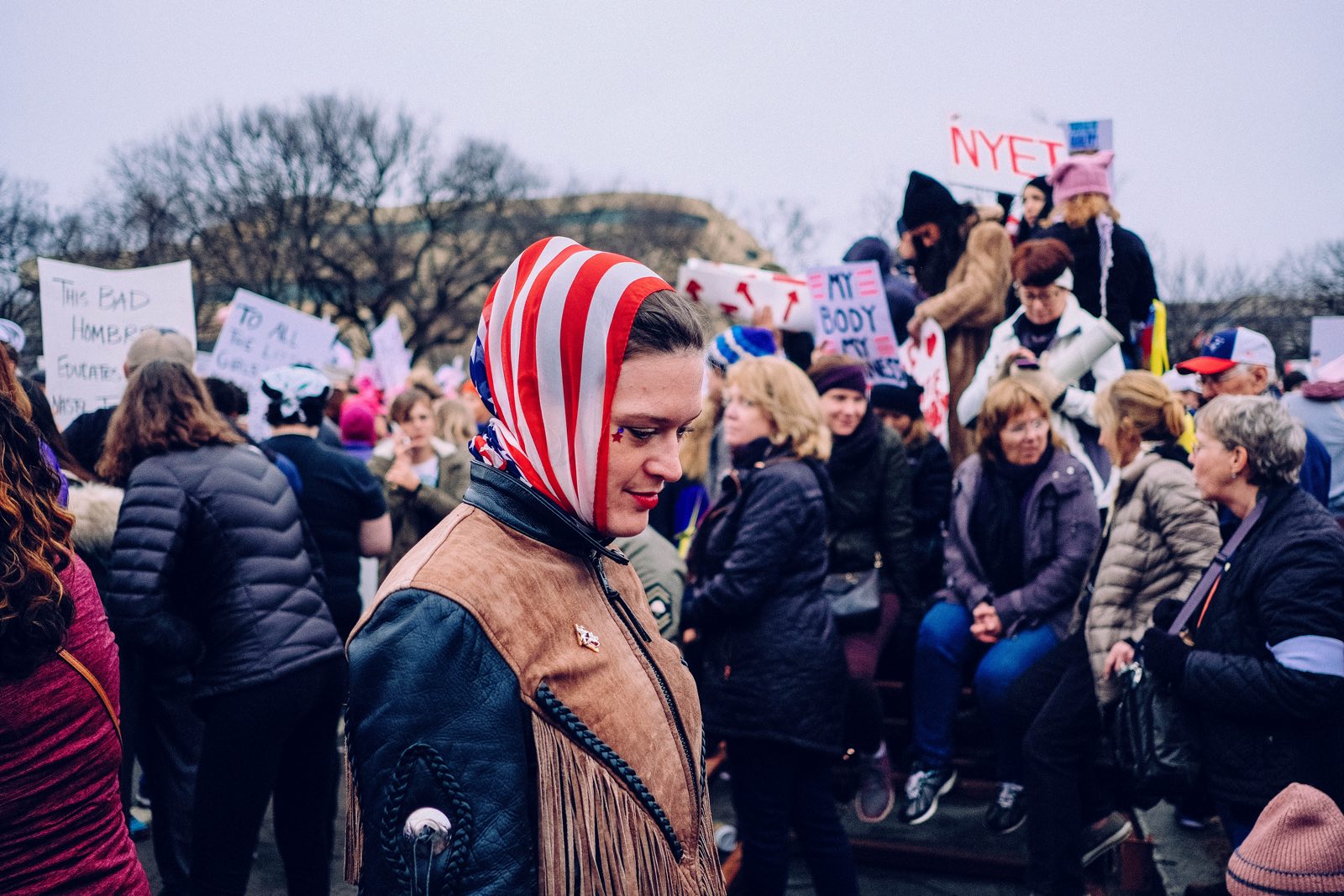 Might this explain why nothing feels familiar and why there is massive social upheaval in the United States? I don’t know, but I present a few photographs here that shows some of the angst I observed during this year of protests. 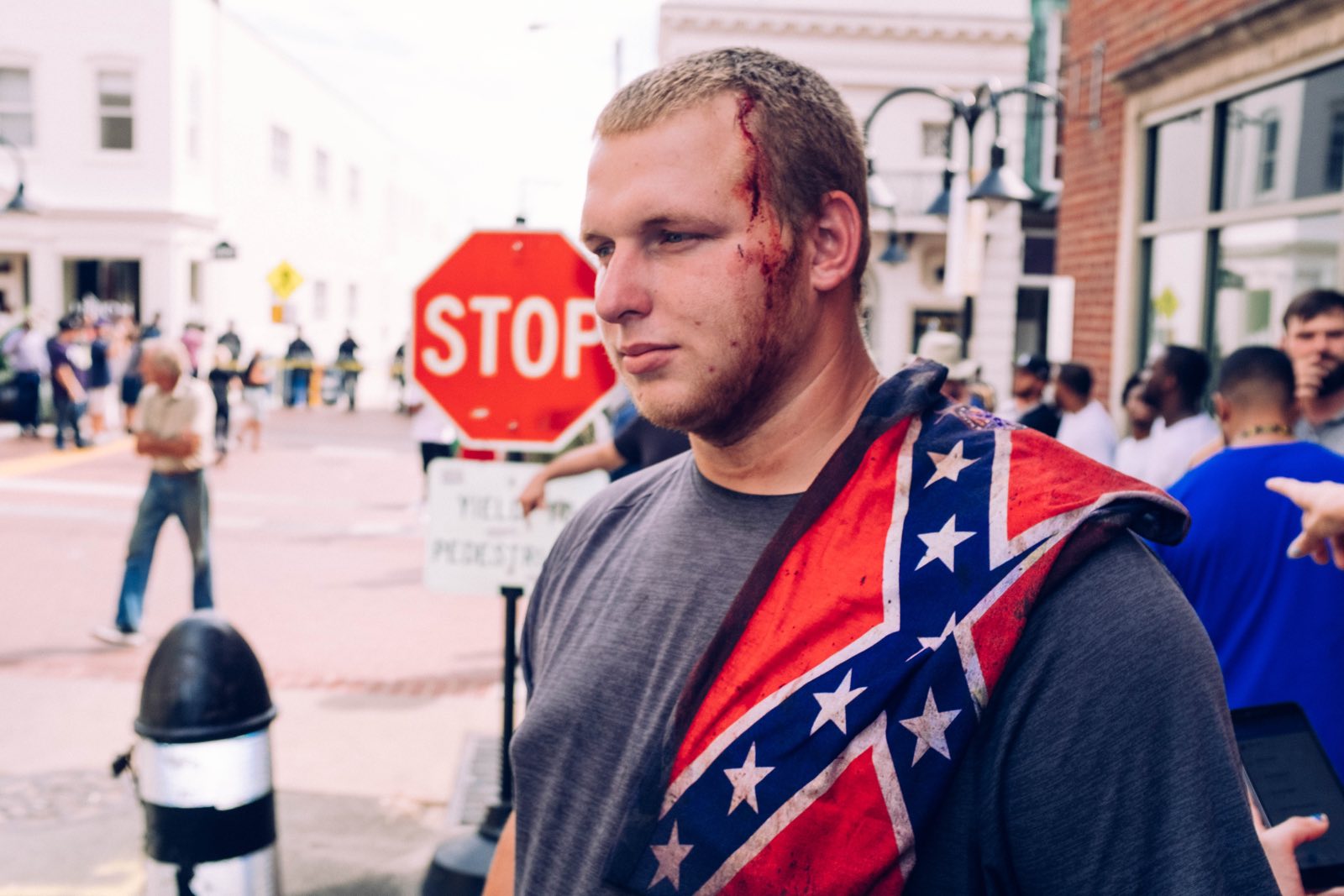 The events of 2017 in the DC area have been hyperactive. I was present at the inauguration of Donald Trump. Due to the presence of high security, most of my time in the early hours of the morning was spent near the South Western part of DC where most Trump supporters were. There was a sense of surreal triumph by his supporters; most of them decked out red and blue, clad with the ubiquitous ‘Make America Great Again’ baseball hats. 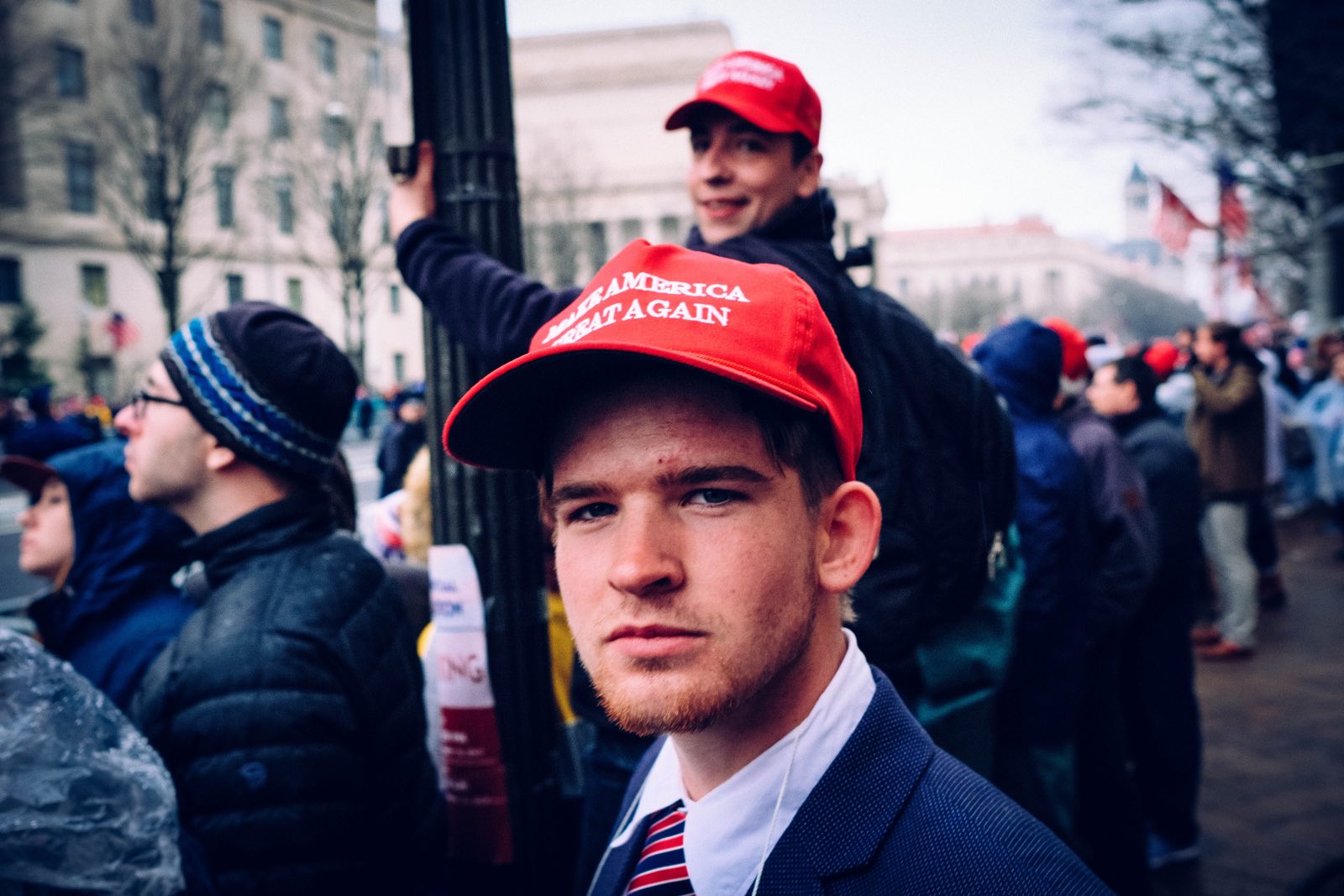 As a chameleon photographer, I also dressed in red and blue to ensure I could effectively engage with both Trump and anti-Trump supporters. My objective was to get a non-biased story about this new societal and political change phenomenon, catalyzed by the election of President Donald J. Trump. The story of his unlikely ascent to power has been very documented so I will not spend much time on that here. 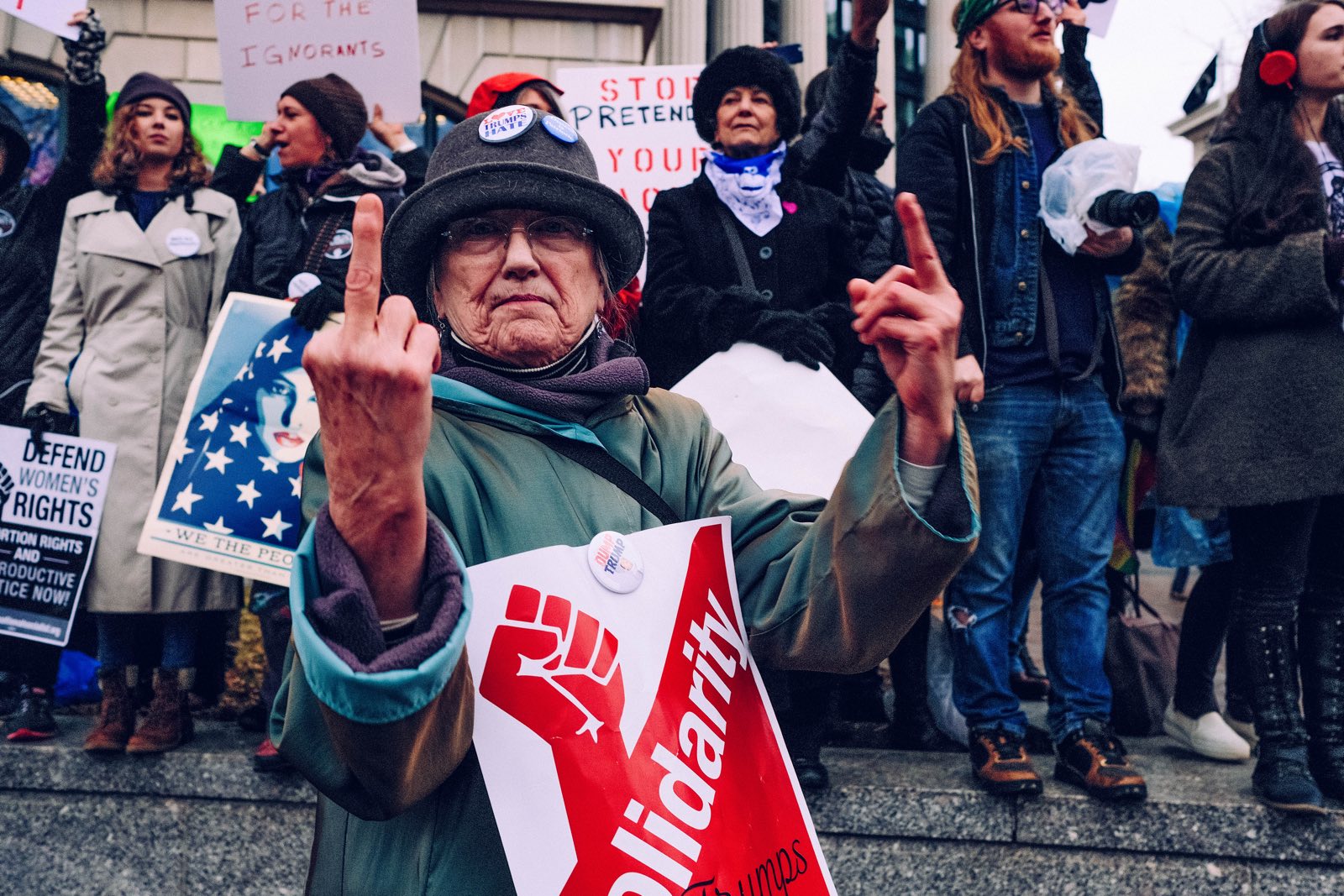 Later in the day, I managed to get through security screening, most of which reminded me of scenes from Alfonso Cuaron’s brilliant cinematic masterpiece where I met and photographed young people disenchanted with the election of Mr. Trump. Later, as I made my way towards 14th and K streets, I observed a burning limousine, and riot police positioned to restore law and order. 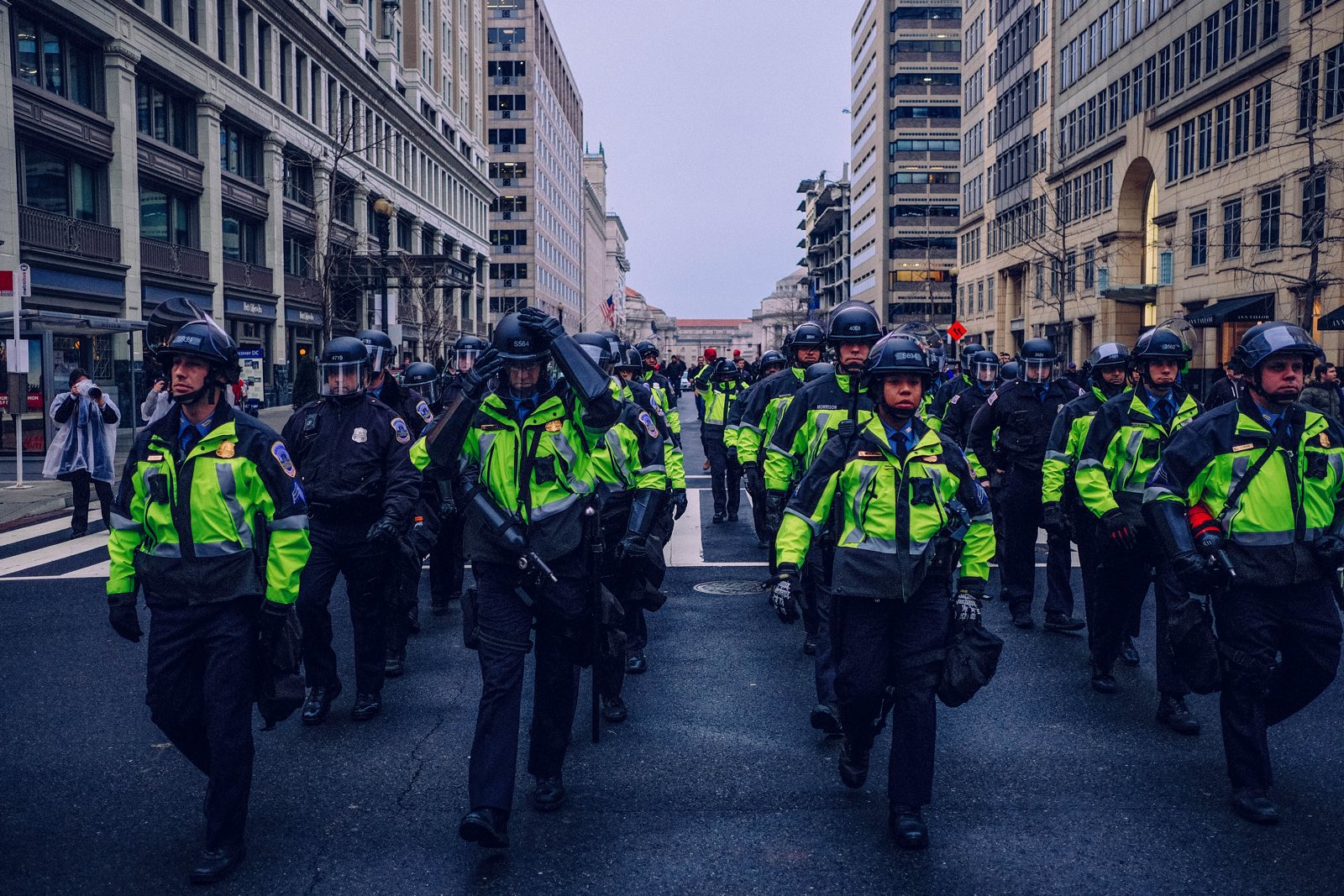 I am not suggesting that protests and riots are unique to the displeasure many felt at the election of President Trump. Most people remember the descent of the of over 300,000 people to the ‘Restoring Honor’ rally hosted by Glenn Beck in 2010, during the Obama presidency. Major protests around the world included the London riots and ensuing protests of 2011 sparked by the death of Mark Duggan, the Arab Spring protests that happened in Egypt and several other countries in 2011. 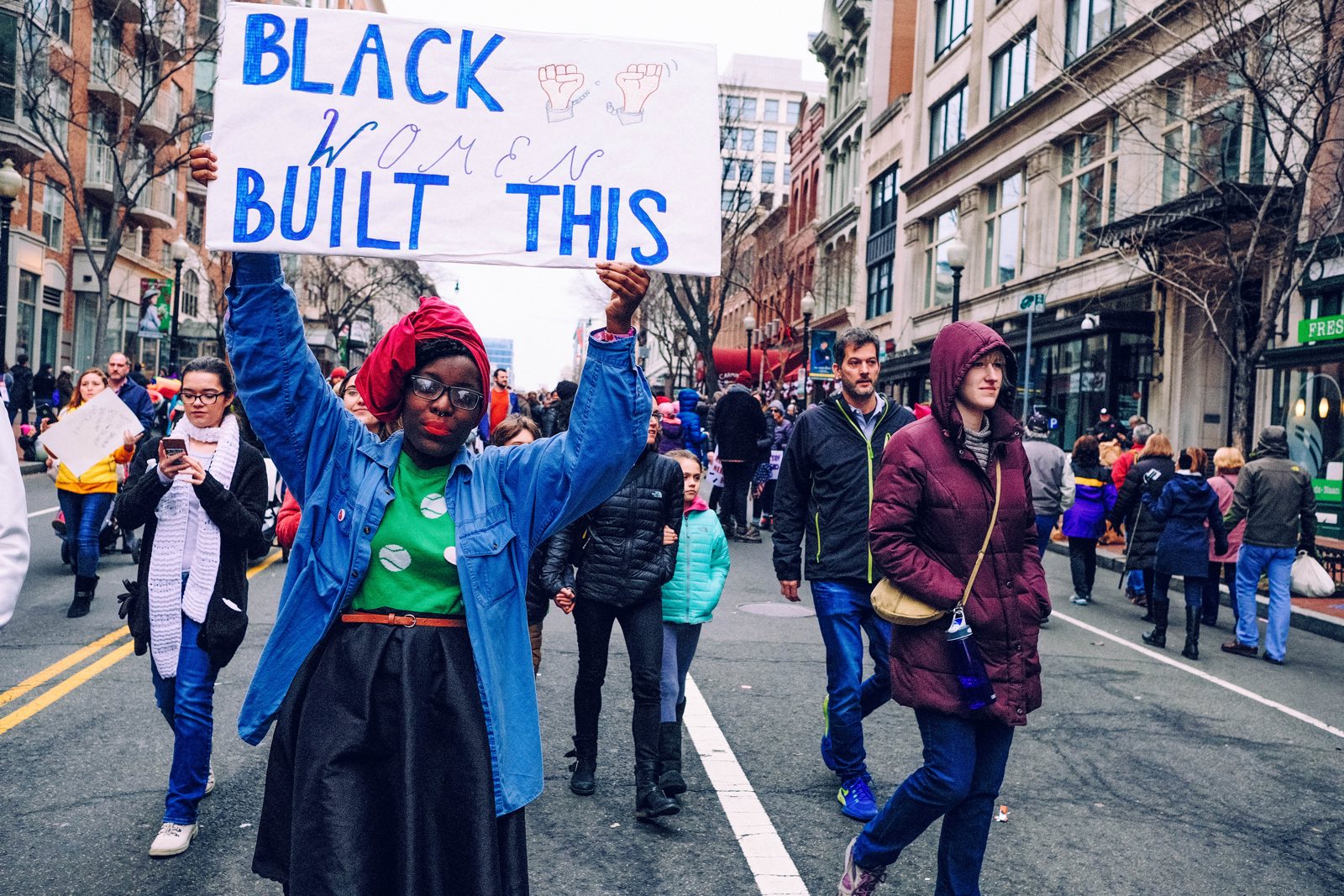 The women’s march happened the day after the inauguration of Donald Trump. I have never seen so many people descend on the streets of downtown Washington DC, as those that were present at the Women’s march, decked out in their pink wool pussy hats. According to exit poll data compiled by Nate Silver 53% of white women who voted, cast their ballot for Donald Trump. When education is added as a demographic marker, 63% of the all white women who voted for Trump did not have college degrees. This data indicates the complex nature of this election. That said, people at the rally were polite, cooperative, helpful, joyous, and felt empowered. This was in sharp contrast to the atmosphere surrounding most of the events of the Trump inauguration. 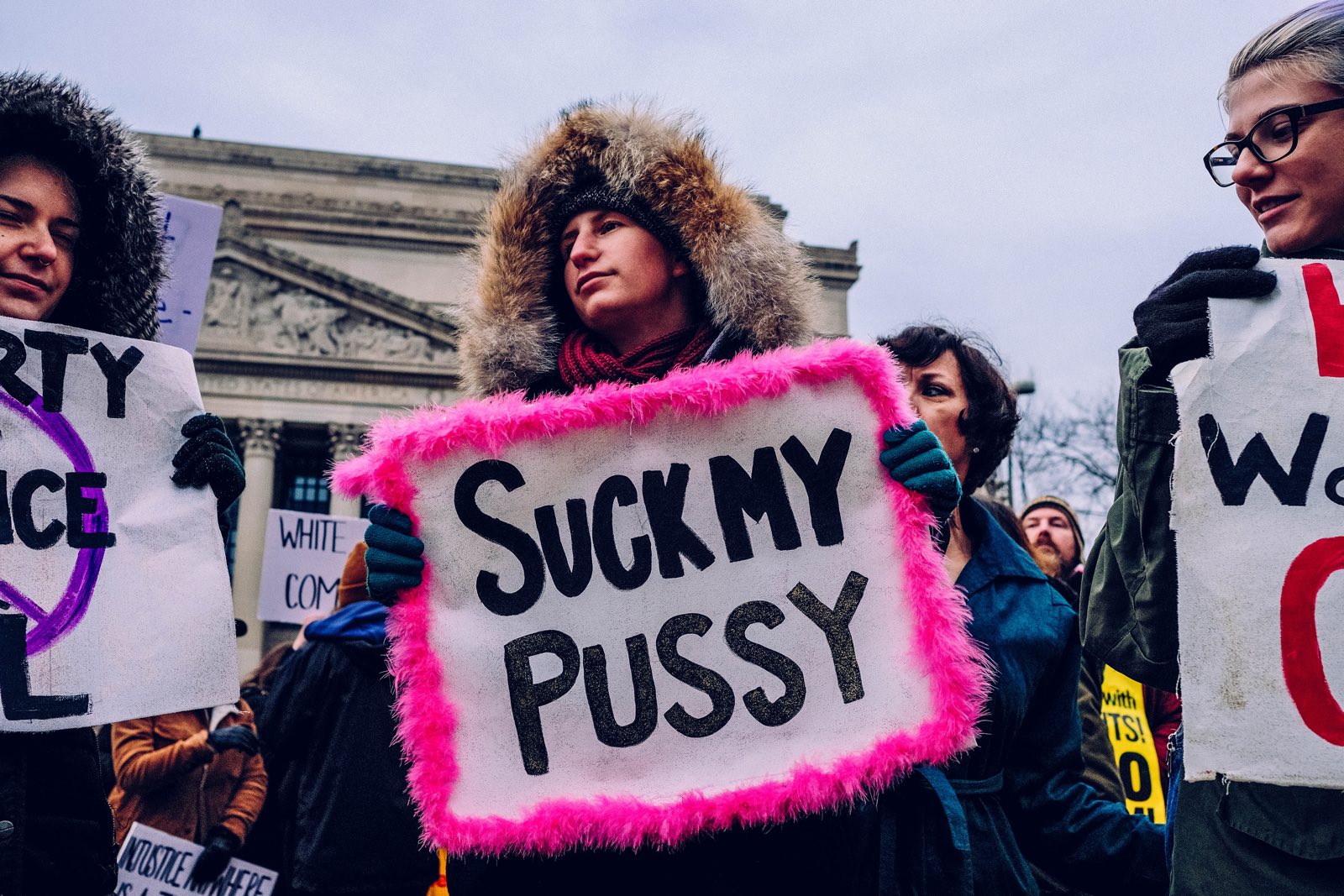 Other protests, though not as large as the historic numbers of the Women’s march were equally impactful. In particular, I remember getting a candid photograph of a policewoman at Dulles airport who was there to help maintain order during the initial announcement of the Muslim ban. Although she was there in a professional capacity, I observed the pain and ambivalence she had about being at the airport with the protest crowds. During this time, I think of artistic references that help explain this time. 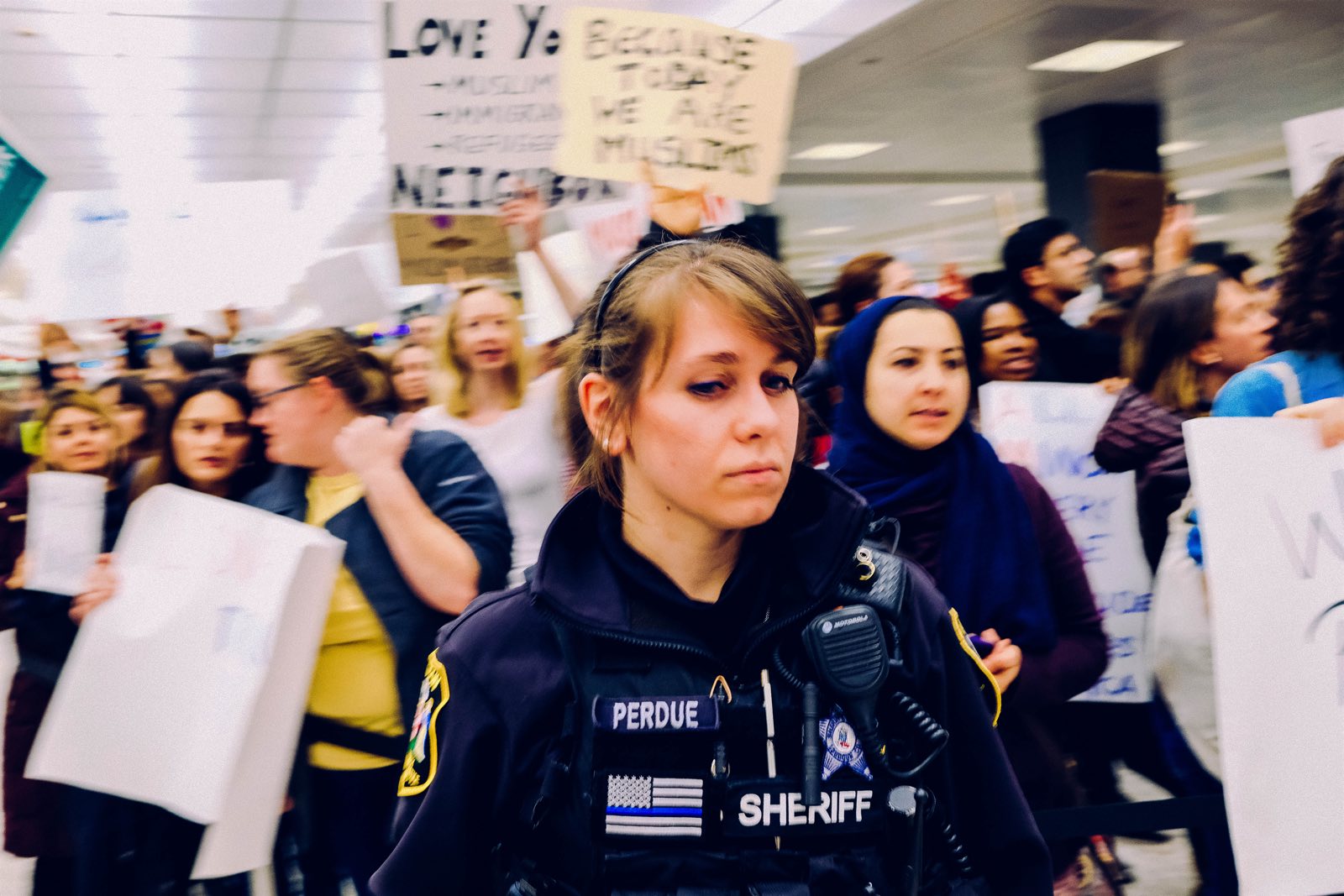 The lyrics to ‘Rising Down’ by The Roots tell the story about the impact of wealth inequality and climate change. I think of the prescient poetry of Saul Williams who implores us to get back to consciousness. I also think about the intellectual prowess of William F. Buckley, Jr, a giant of conservative thought. I think of the warnings of Prof. Noam Chomsky. And I also think about the complex analysis of conservative thinker, Dr. Thomas Sowell, most of which seems to be missing from public discourse at this time. 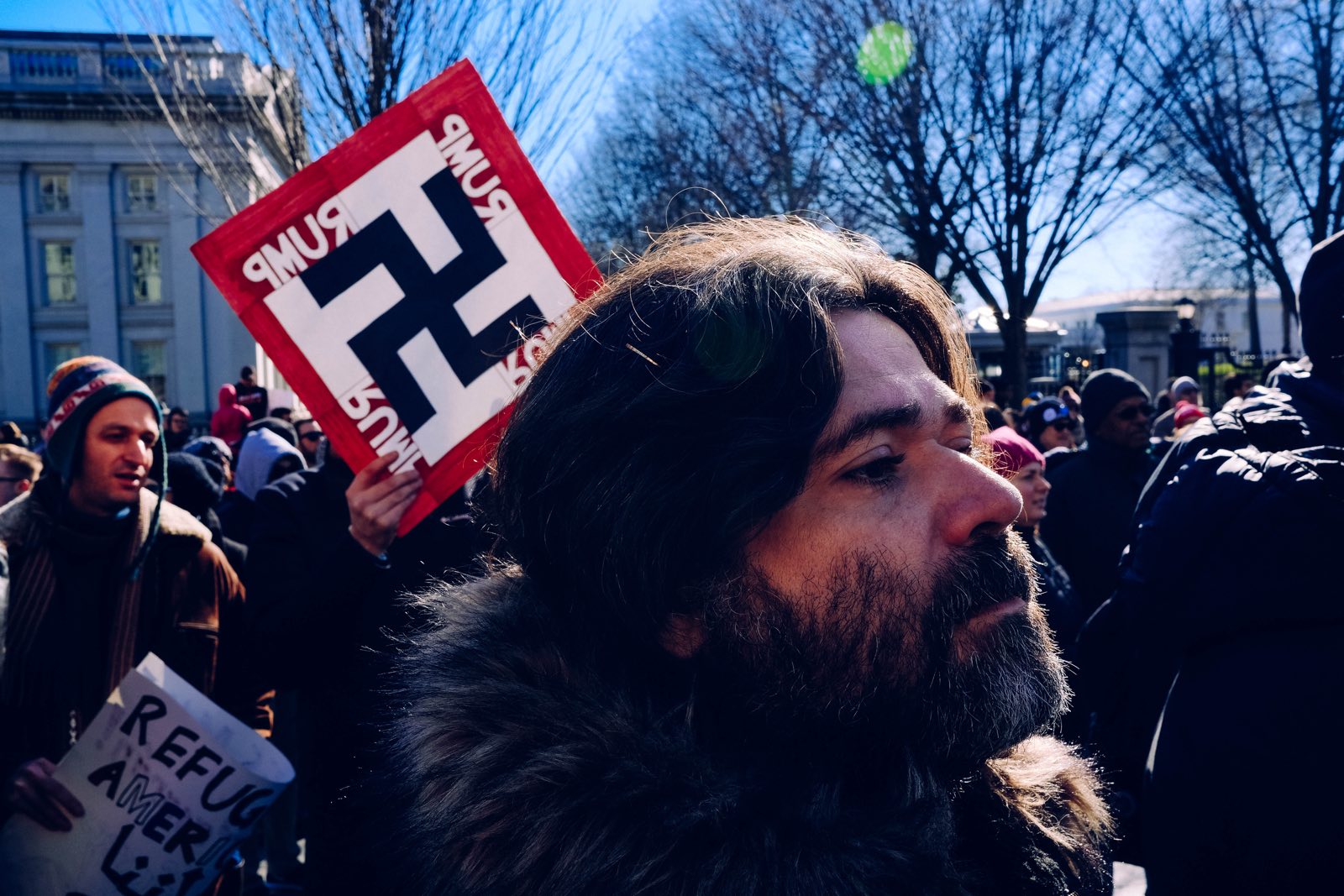 Regardless of whether you support Donald Trump or not, he is having a real impact on the direction of the country and the world. Some the events that are to come, such as artificial intelligence and machine learning, and how it impacts ways of working, will happen regardless of the Trump presidency. 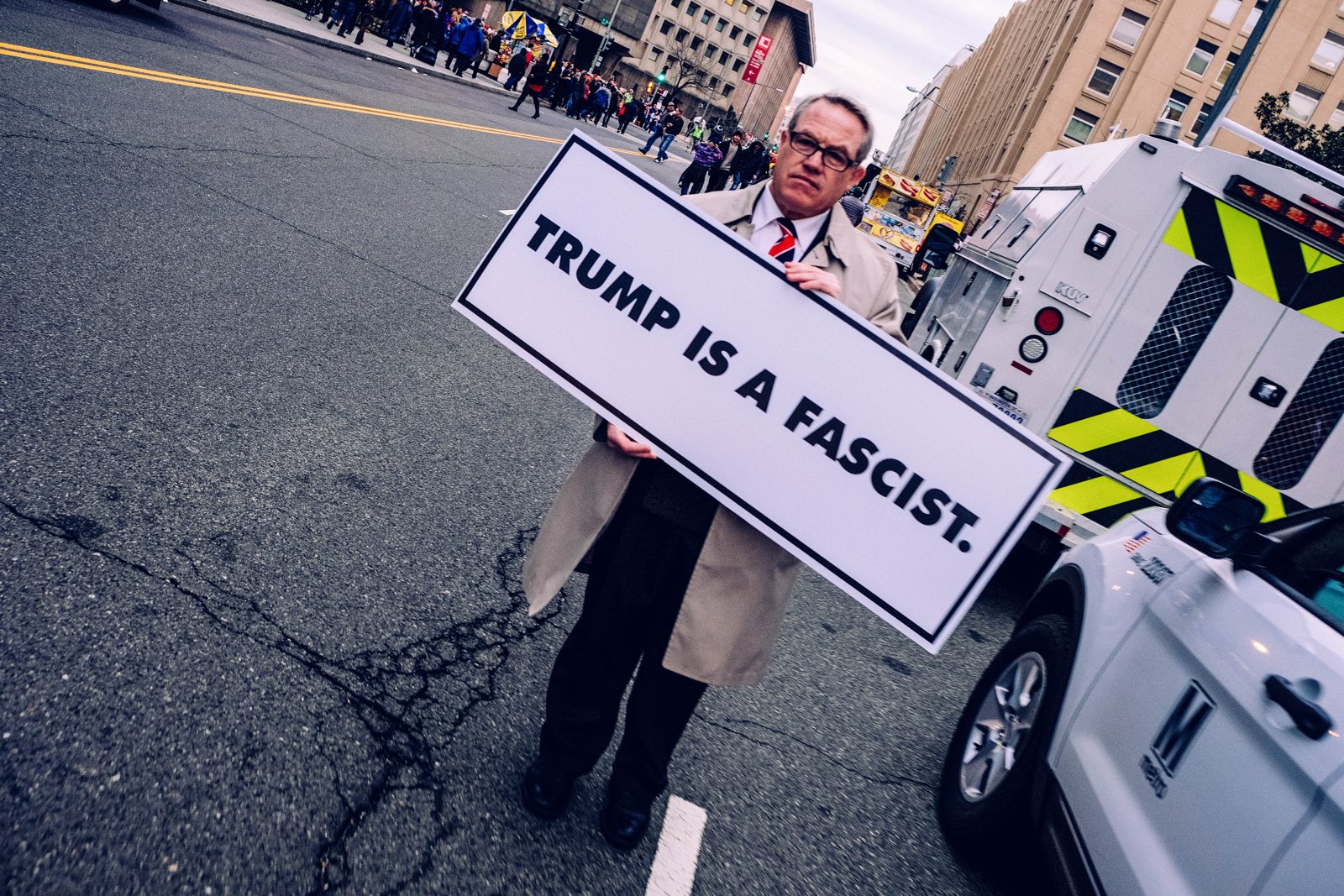 There is a massive societal change happening, and the negative feelings many have towards the Trump presidency may be symptomatic of broader changes that have left many with a feeling of enervation, anxiety and ennui, defiance, hate, love, transcendence, hopelessness, charity, hopefulness and other emotions. These photos are my attempt to document some of these events. 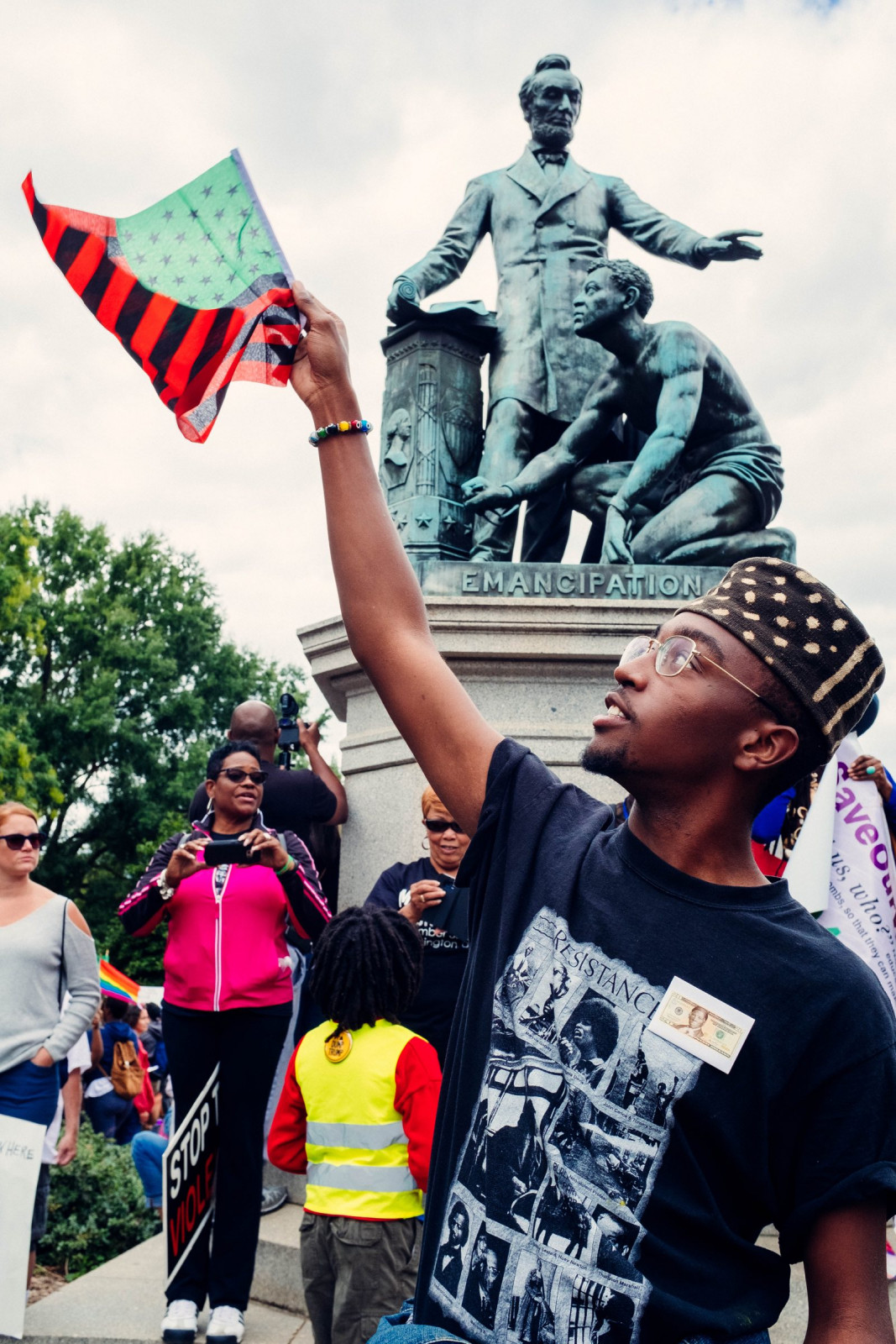