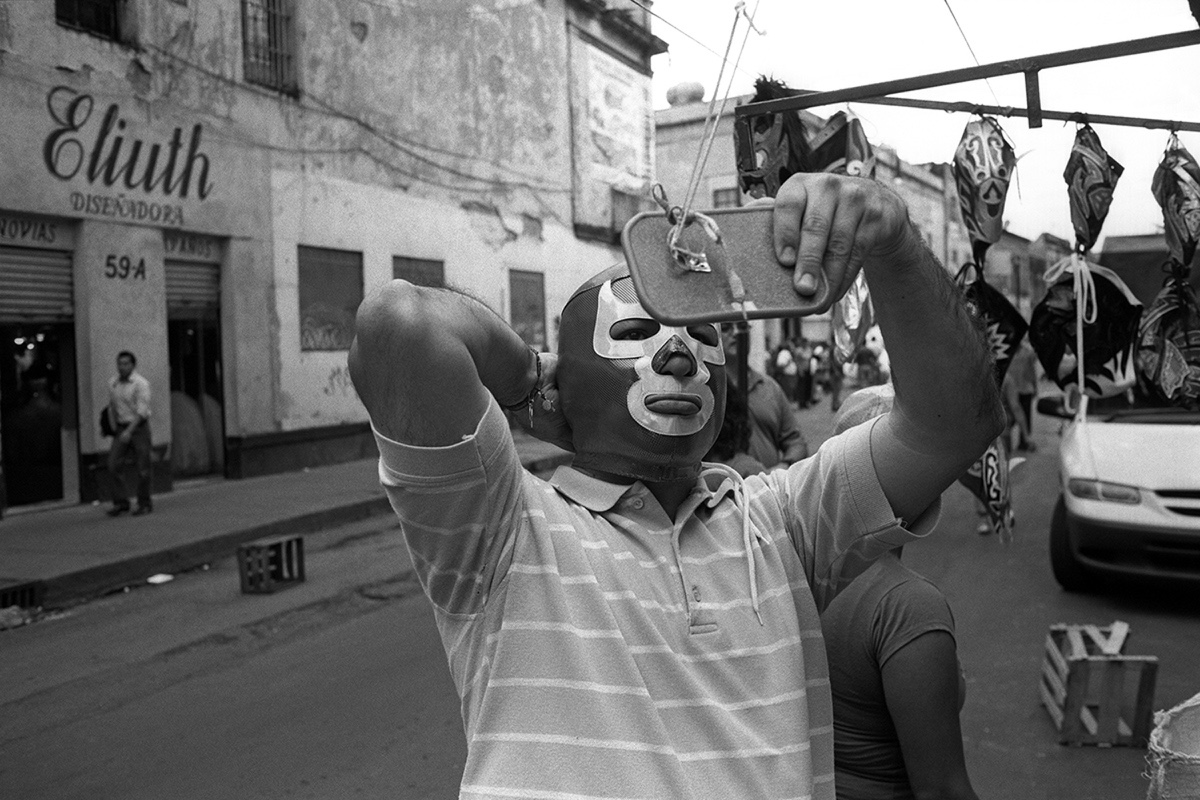 Keith Dannemiller lives in Mexico City. In the morning, he jumps in public transportation, sits next to a stranger and says the customary greeting “buenos dias”.

Mexico city is a place where people celebrate life and make the most of their relationships with others – strangers or not. You can see many personal interactions taking place in public spaces. People sit or stand on the metro conversing, kissing, hugging, arguing. One reason there is such an open attitude among local residents boils down to a matter of reduced space in a crowded city. The fact of the matter is, you may not have the luxury of a backyard or even a private room and so people must learn to relate to others in the space they are given.

Callegrafia, roughly translated “what the street writes,” is about just that. Keith relies on the streets for his subject matter and inspiration. You could say the streets lead him. He observes life as it happens on the streets, gets close with his quite Leica, and captures.

In on our audio interview with Keith, he shared more about his life in Mexico, the current political issues there, his street photography process, and some of his many projects, a few of which are detailed in the photo selection. Listen in by clicking the link below:

A Selection of Keith’s Photos

Keith says, “The name of the project is of my invention and a play on a couple of Spanish words: calle – street; and grafía – written or drawn. I use it to mean “what the streets write.” On these avenues and alleyways of Mexico City’s great Centro Histórico I walk, I watch, and I wait. That process of making photographs acknowledges the importance of the ever-changing reality out there, and how I relate to it.

Mexico City is an insanely human city. The level of communication and interaction between people is street. Things happen here, people do things in the Centro like few other places. I am fascinated by the fact that I can walk down a crowded pedestrian walkway and see a woman seated on it’s edge against a 17th century building doing her make-up. All she needs is a little mirror and an ephemeral area she herself has claimed for the most personal moment. In five minutes when she has finished and left, the space will be transformed by a new occupant and a new activity. The city is in constant, vibrant flux and it provides, not just the backdrop, but the rich, visual narrative of light that I translate into unique imagery with film.” 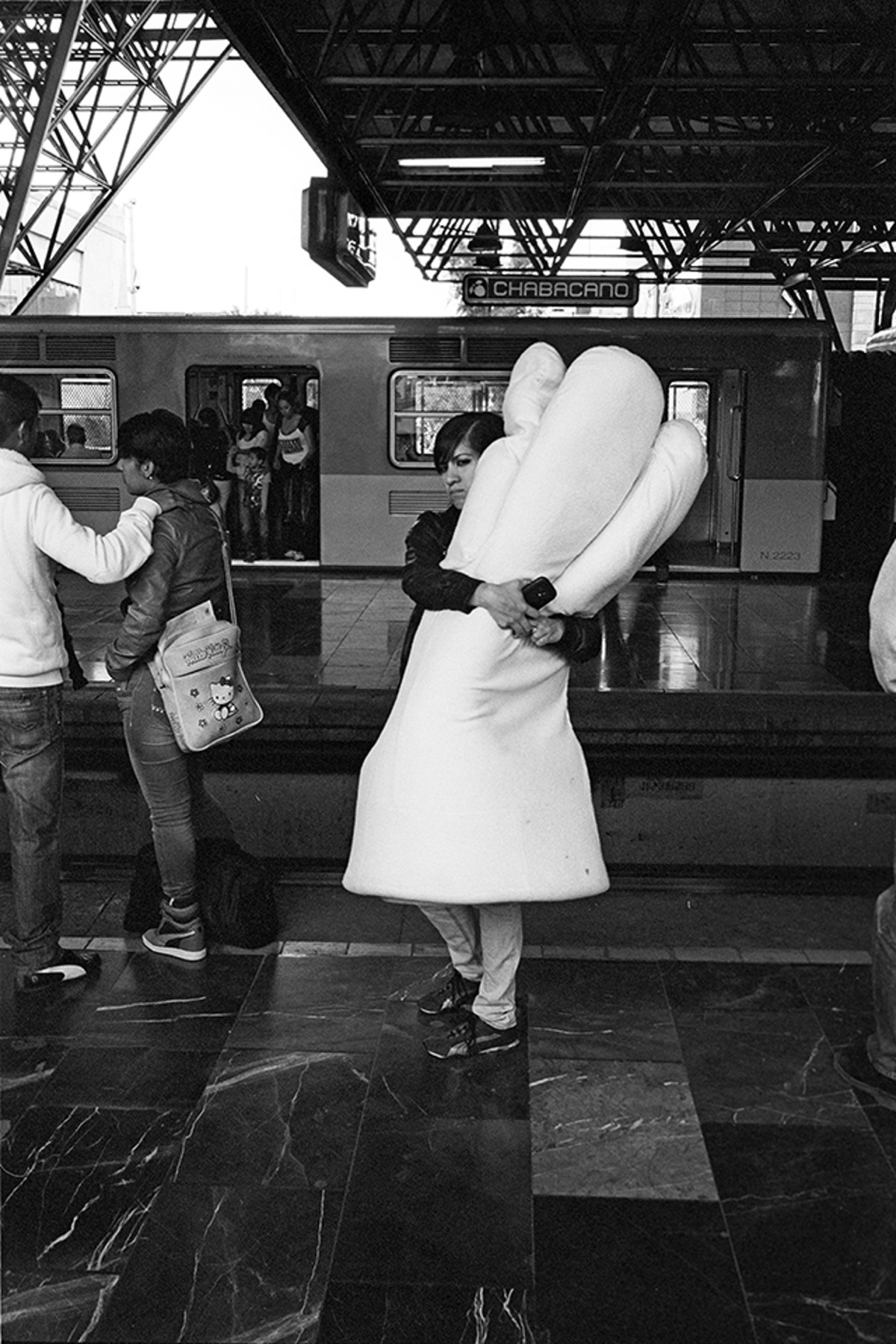 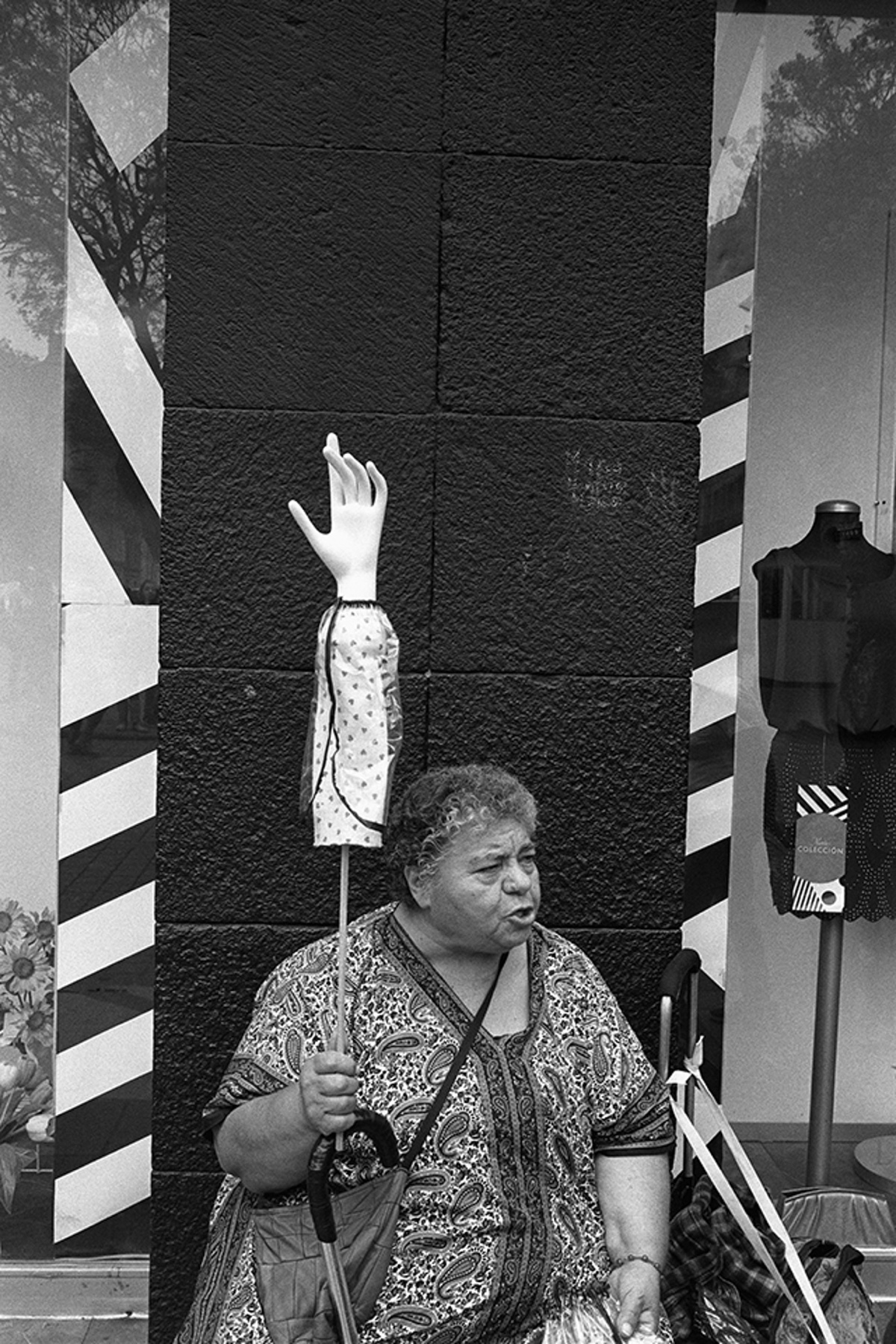 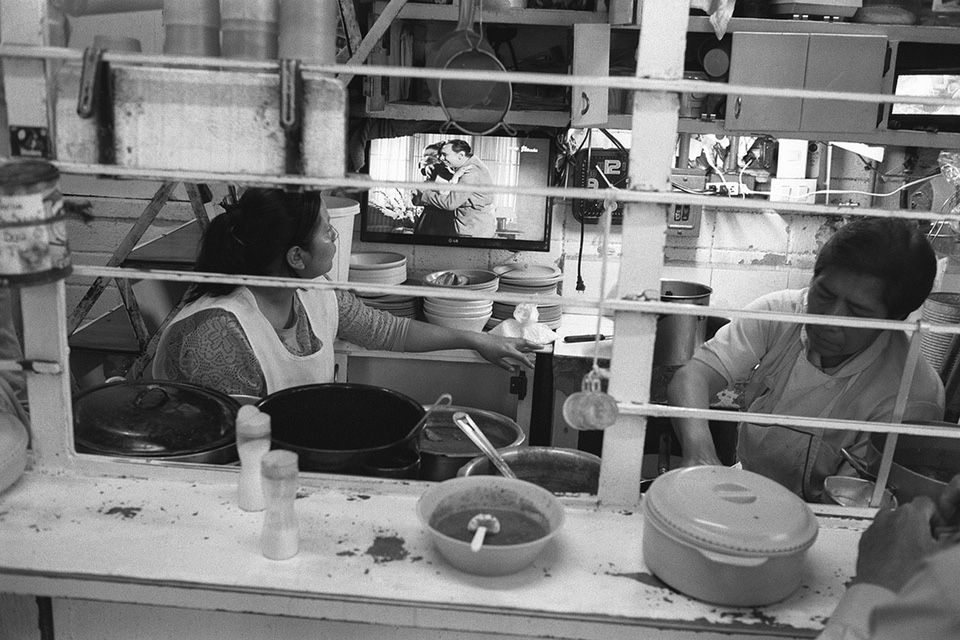 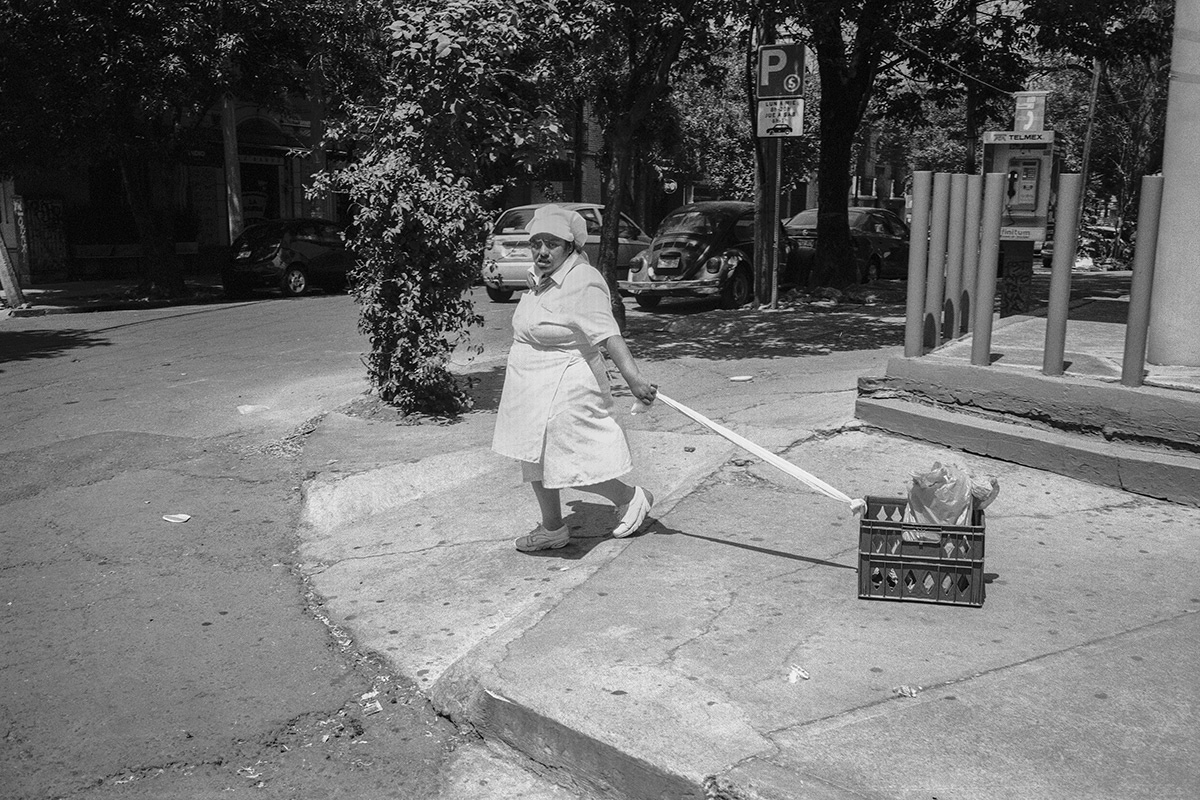 On the 28th of each month, many residents of Mexico City head to one church to pray to Saint Judas, the Saint of Lost Causes. The reasons for their supplications vary, some lack decent living conditions, some need resources for health care, but all live with a weighty sense of insecurity – one they wish to be relieved of.

Keith says, “I went to Catholic elementary school in Akron, Ohio. My relation to the world in those early years of my life were shaped by and based on faith. It filtered my experience and colored my perception of society. As my world expanded, faith took a back seat. I am no longer a religious practitioner, but I realize and respect the role of faith in the lives of others.
“The cult to the Catholic saint, Jude Thaddeus, happens on the 28th day of every month and reaches its height on the 28th of October, his feast day. Almost all Mexicans believe in some form of fate but many also have an unswerving belief in a pantheon of saints, like Saint Jude, who successfully rectify the injustices of their individual destiny. For many who believe that fate has dealt them a bad hand, petitioning your special saint for health, a job, or help in personal affairs – legal or illegal, moral or immoral – is as Mexican as, well, drug cartels and tacos.
“These followers encompass all ages but they don’t come from all walks of life. They arrive here each month on foot or in public transportation from the inner-city barrios and marginalized neighborhoods that ring the city – breeding grounds for the desperation that feeds the growing cult. It is worth asking, ‘Is this the future of Catholicism and the last chance of millions of Mexico’s disaffected youth, who, spurned by ineffectual institutions, gather with a little dogma and a surplus of expectations for the saint of lost causes?’ Young seekers, whose families and even other saints have seemingly shutout, are welcomed with open arms by the Claretian missionaries at the San Hipólito parish. Those with nowhere else to turn and little in their pockets will always find solace and refuge in the end-of-the-month congregation of Jude Thaddeus at San Hipolito.” 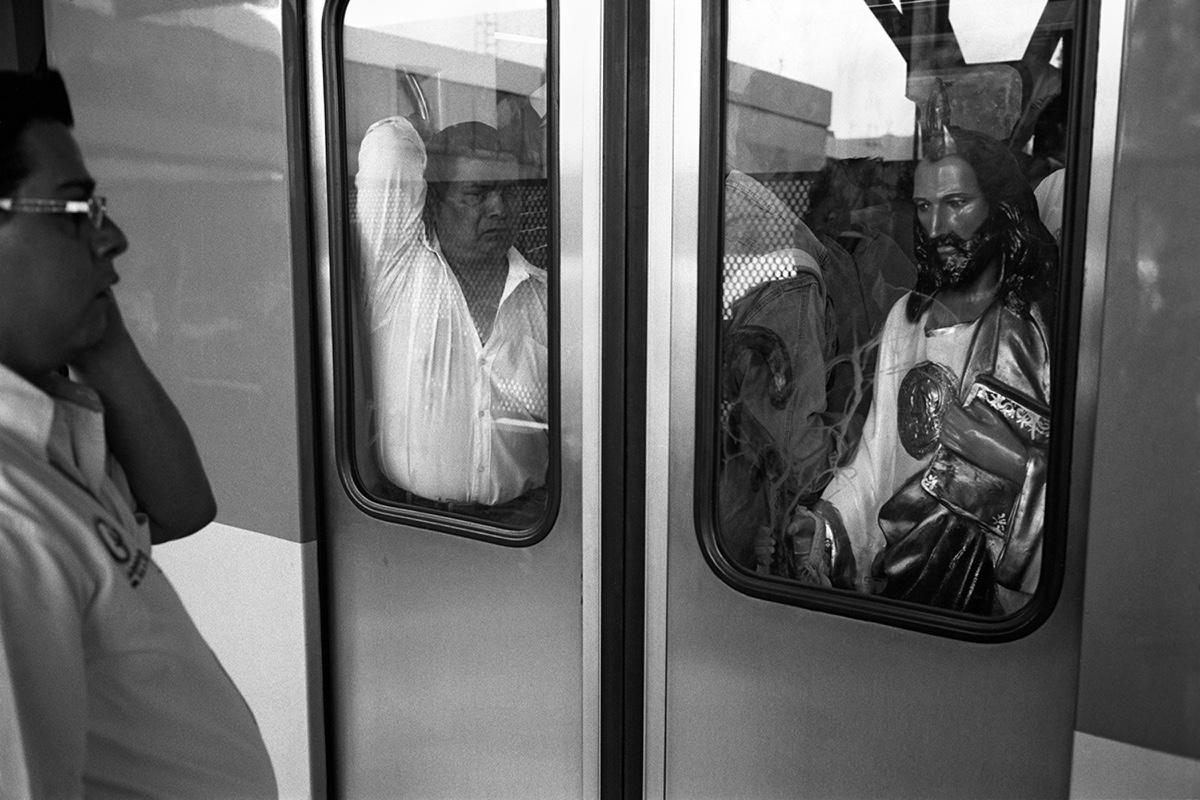 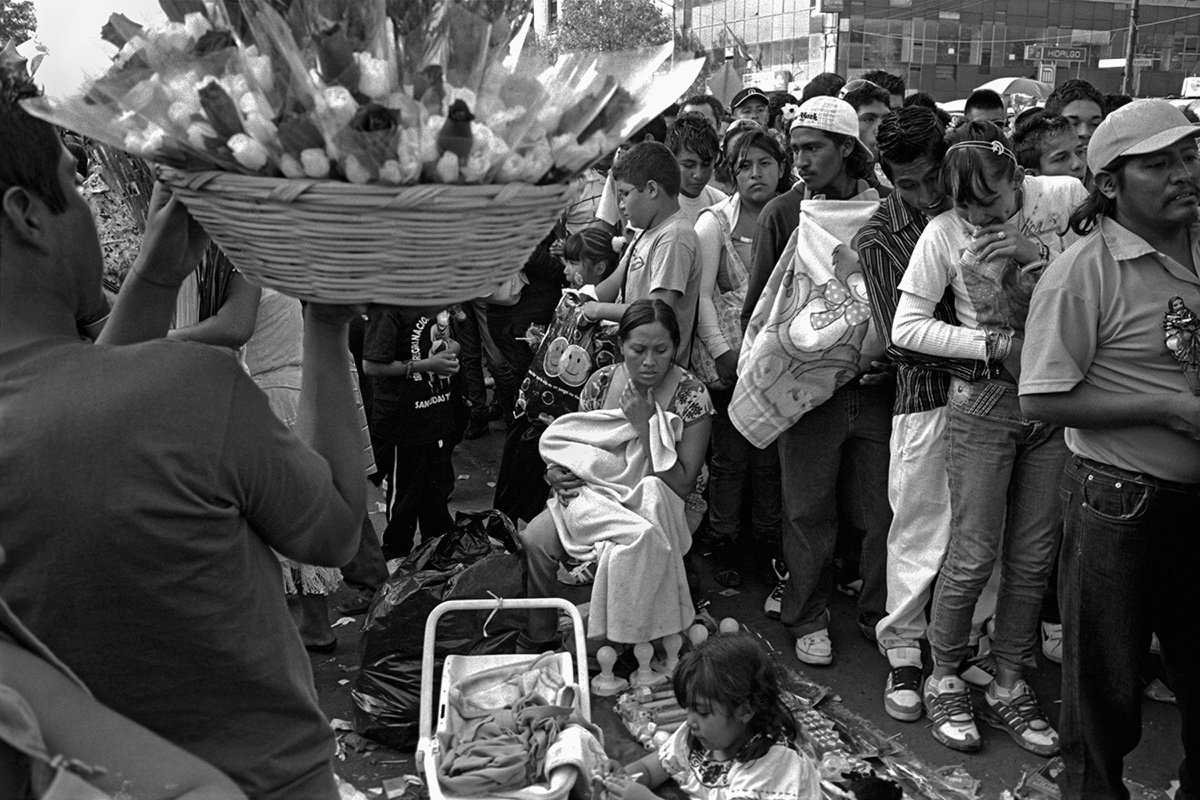 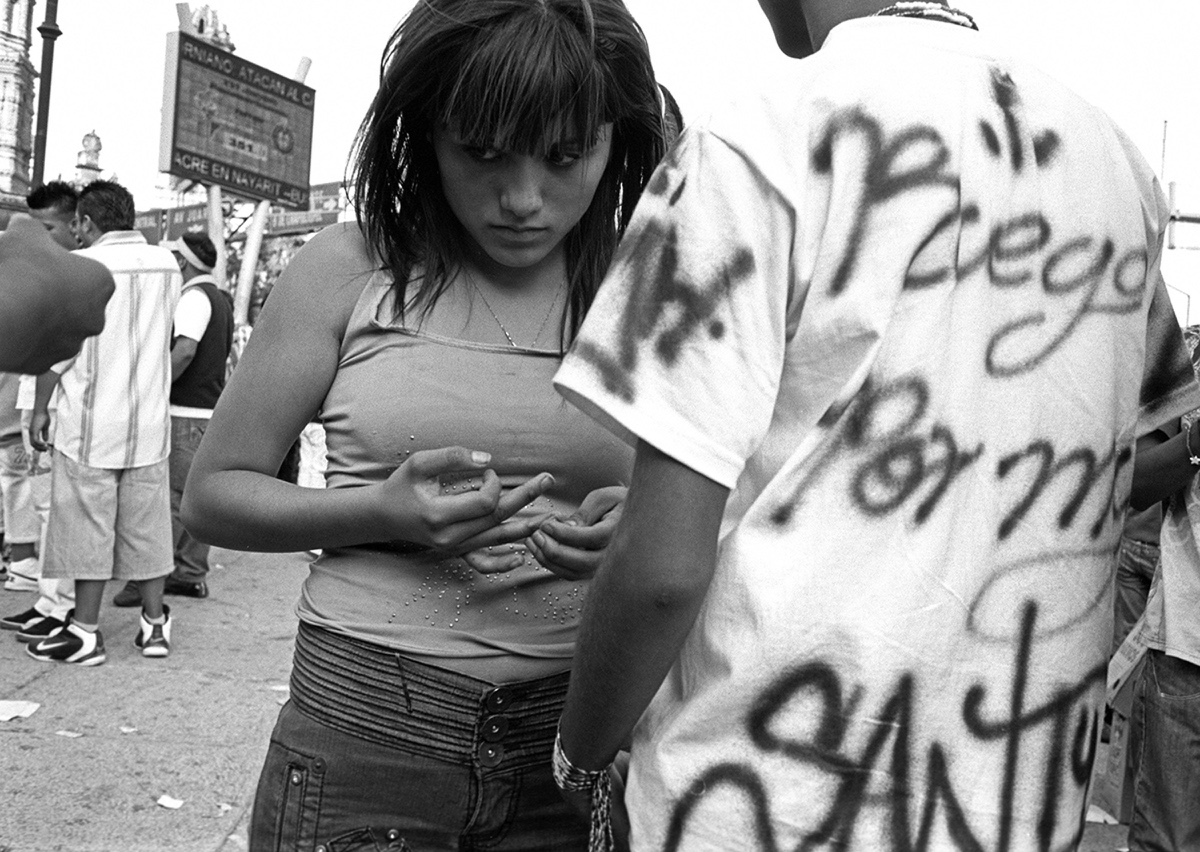 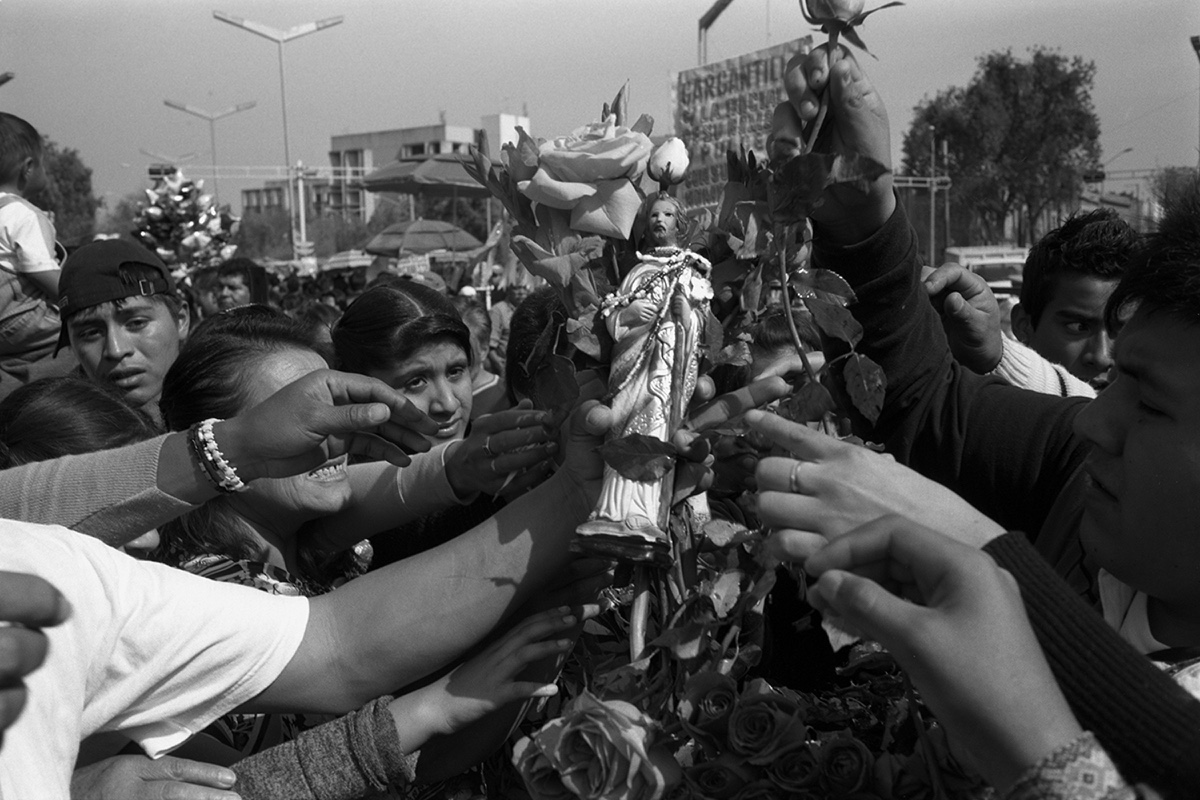 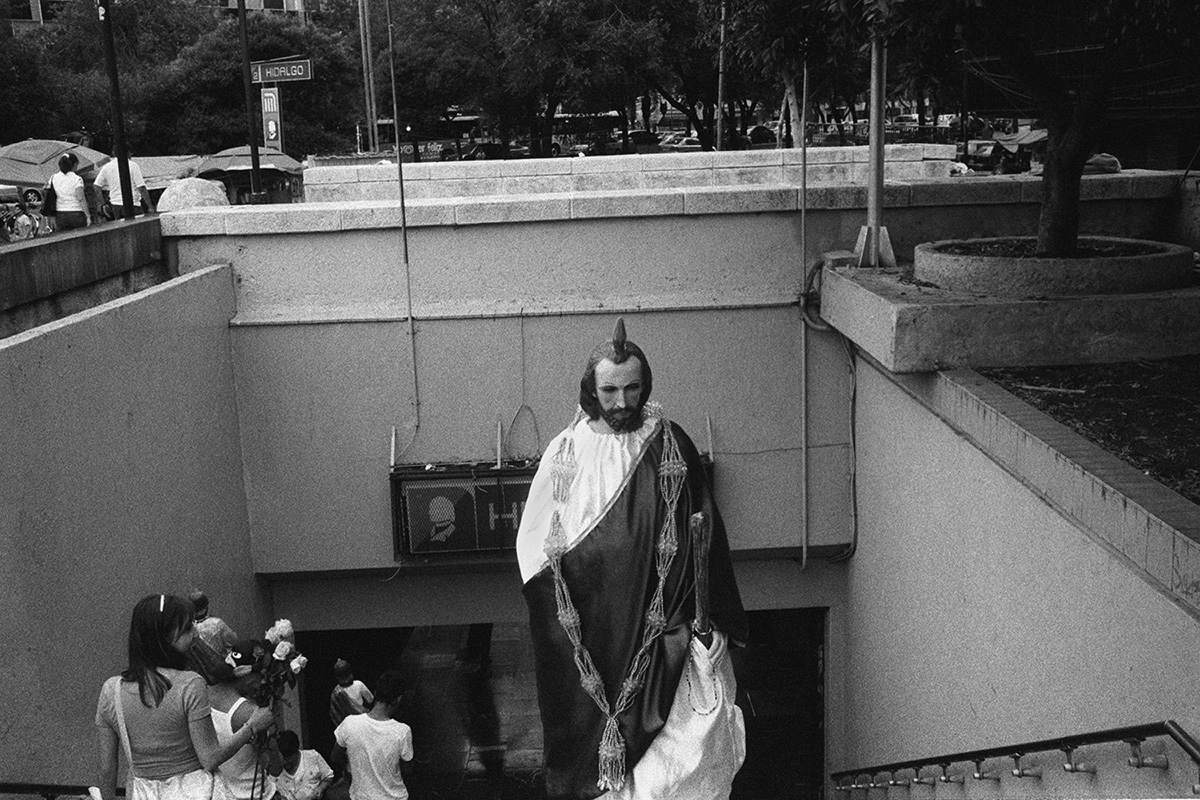 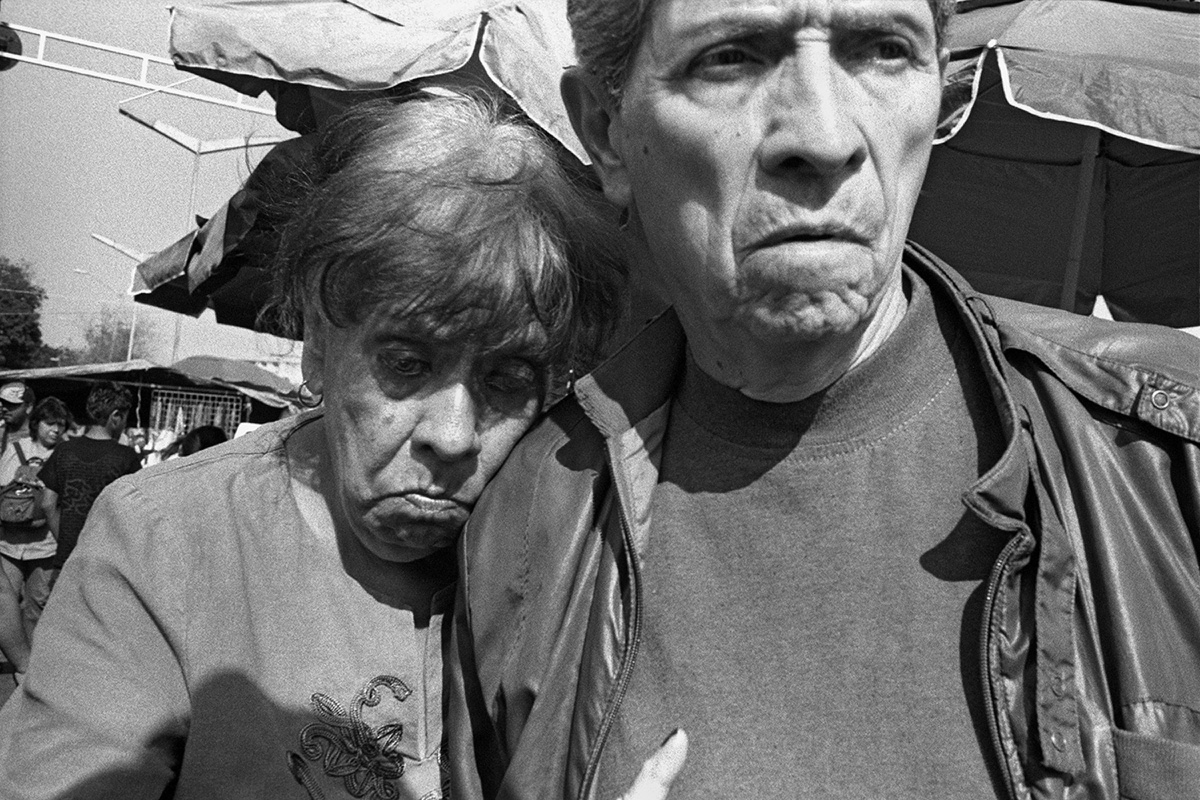 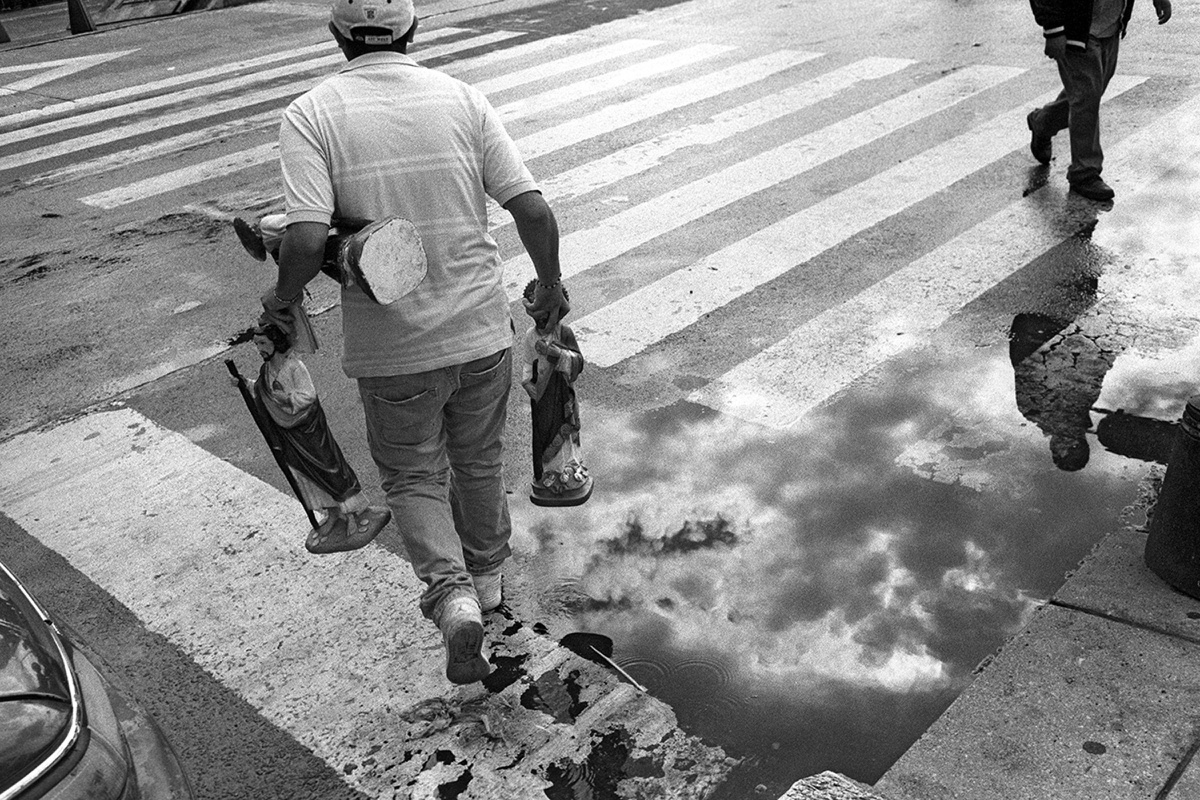 Bordo Poniente, located on the eastern side of Mexico City, is one of the largest open-air garbage dumps in Latin America. At one point the government wanted to shut it down, but the many people who work there, in danger of losing their job, began some large protests that disrupted city comings and goings. Keith got permission from the head of the union to talk with workers, film their work, and take photos of the workers and activists. Wanting to highlight the workers’ faces and clothing, Keith did a series of portraits just outside the office, in a tiny meeting room: white background, two lights, nothing fancy.

Keith says, “I shot this portrait project as an adjunct to a more photojournalistic one on the then, imminent closing of this big dump site where they worked, the Borde Poniente. These men and women worked at the Bordo Poniente (Western Edge), which closed permanently on December 31, 2011. The long-standing tradition of the ‘pepenador’ in Mexican society is slowly disappearing, but more importantly, some 1,500 laborers were put out of work.

“It is an encounter with a group of ‘pepenadores,’ garbage separators, who spend their day picking over and recycling some four thousand metric tons of refuse out of the thirteen thousand generated each day by the megalopolis that is Mexico City. A sufferable job, but one that has nonetheless sustained generations of families.
“For me, this project presents the possibility to discover directly something of the lives of this rather recalcitrant, closed group. They operate on their own, with tenuous ties to city authorities and outsiders. But the fact that they represent an outmoded work model places them in an extremely vulnerable position. Asked what they plan to do when left without a job, most have no idea.
“For me, making portraits of the ‘pepenadores,’ like other groups I’ve chosen to photograph, (Pachucos y Rumberas, Boxeadoras), is analogous to the art of cutting for sign. This is the work of a sign cutter or tracker who searches for details, makes note of what he finds and creates a plausible narrative that helps to interpret what he’s seen. The process is the search. The end is the understanding. I want you to see clearly and directly the visual information I’ve gathered and presented, but I also want you to have the possibility of creating your own narrative.
“And in that process of creating your own narrative framework, hopefully the images will generate some extra-photographic questions. Maybe make you wonder about the role these men and women play in a society that stigmatizes those unfortunate enough to be born without any institutional buffer from the vagaries of life much less without wealth, power or influence. Throwaway lives that exemplify the societal inconsistencies between historical entitlement – the continuing birthright of the few here in Mexico – and modern day disenfranchisement – the lot of the many.” 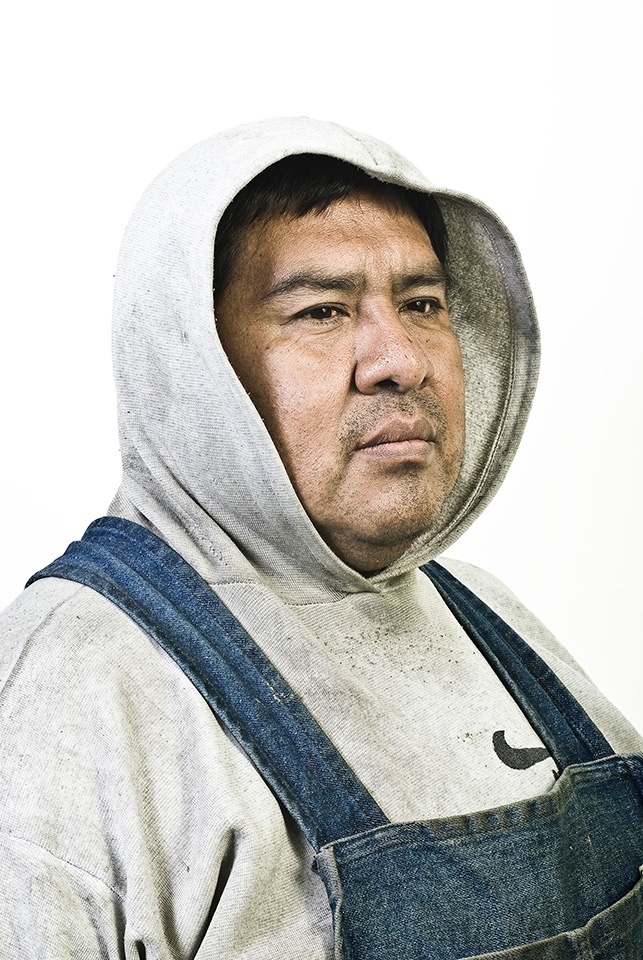 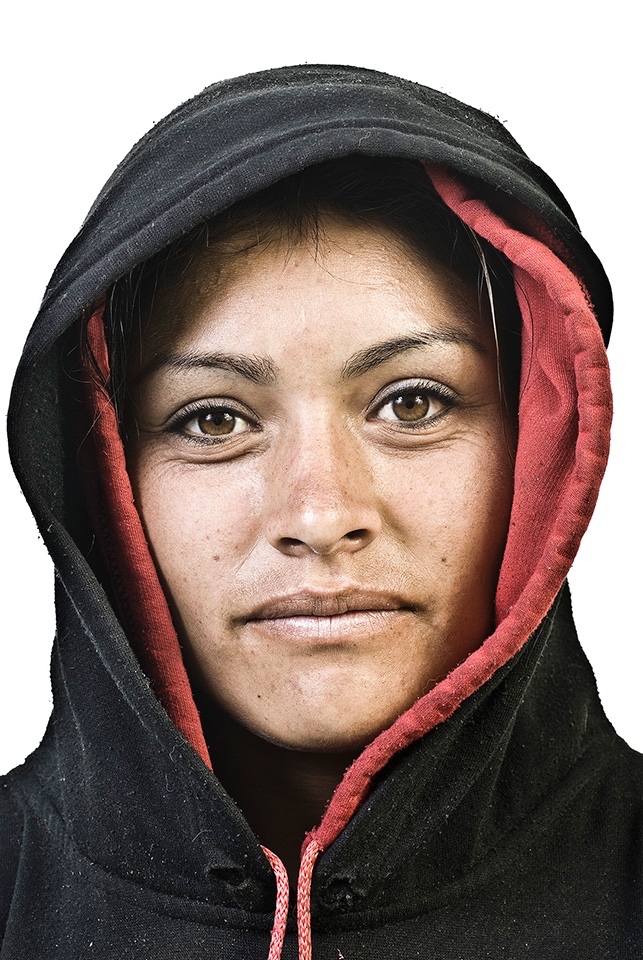 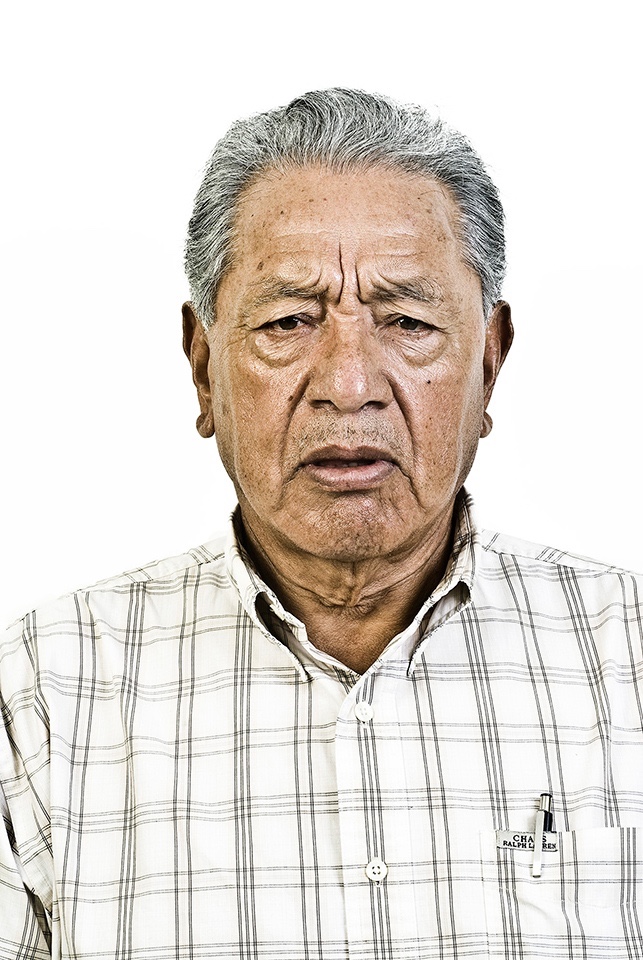 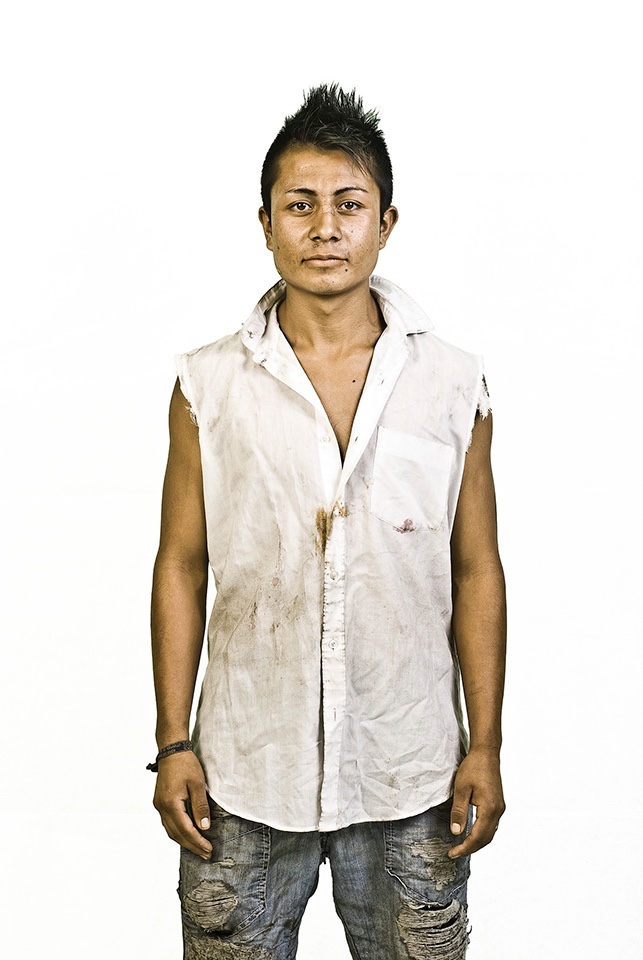 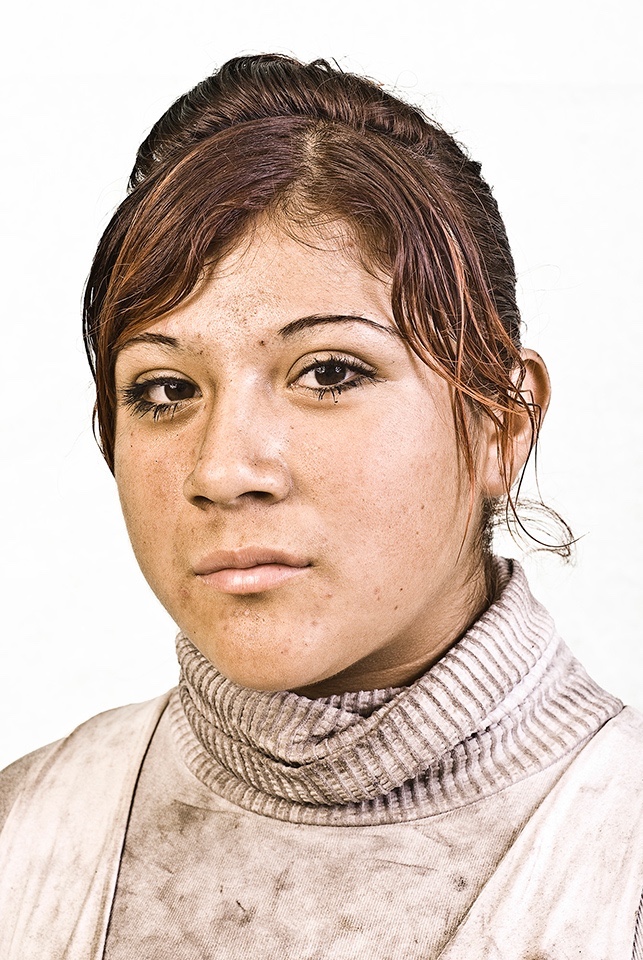 Most of these photos were taken in 6-7 hours in one day. It was a stroke of luck that allowed Keith to capture these images. The migrant’s train, La Bestia, has a reputation for never leaving on schedule. People wait hours, even days, close by the train and at the first indication of movement, people run out and get on it. That day it was a sweltering 37-39 degrees (about 100 degrees Fahrenheit). Some people sat atop the train, holding their place, some baking in the heat for more than 10 hours. Many passengers were small children and babies, sitting on top of La Bestia for a trip that can last days or even weeks.

La Bestia itself has quite a story. Ultimately, the US government forced the Mexican government to stop these sketchy train migrations through borders. Now, migrants walk or take buses. After documenting this event in the summer of 2014, Keith feels that most people from Central America classify as refugees rather than migrants, as they were forced to flee from their countries in many cases because of violence, persecution, war or discrimination.

Keith says, “I photograph a lot on the streets of Mexico City and in that work have come to believe that these words of the influential photojournalist Robert Capa express perfectly what I attempt to do. Patience, vision, experience all have their role in forming an expressive image, but most important is ‘being there.’ To paraphrase Capa, that day in Arriaga, Chiapas, photographing ‘La Bestia,’ ‘the pictures were everywhere.’ “And I think that because I had never encountered such a scene anywhere before, the images were abundant. They were easy to make, photographically speaking, but it was difficult to look at women, babies, young kids, whole families making their ways up the ends of the cars with a backpack, a bottle of water and a piece of cardboard. The babies and kids who couldn’t make it to the top on their own had to be hoisted, pushed or carried. Teens and pre-teens in groups of four or five, lent a hand to each other on the ladders. I couldn’t help thinking that maybe just last week they were doing much the same, but while hanging around a jungle gym at school.
“Looking through a camera gives a photographer one level of separation from reality and many say, permits the objectivity necessary to present the ‘truth.’ I don’t think so. The making of a photographic image is a finite collection of subjective decisions, beginning with, more likely than not, the ‘what’ that you choose to photograph. Observing this ominous starting scenario to a dangerous journey on ‘La Bestia,’ I was forced to ask myself, for visual and technical reasons, but for personal ones too, ‘What really is going on?'” 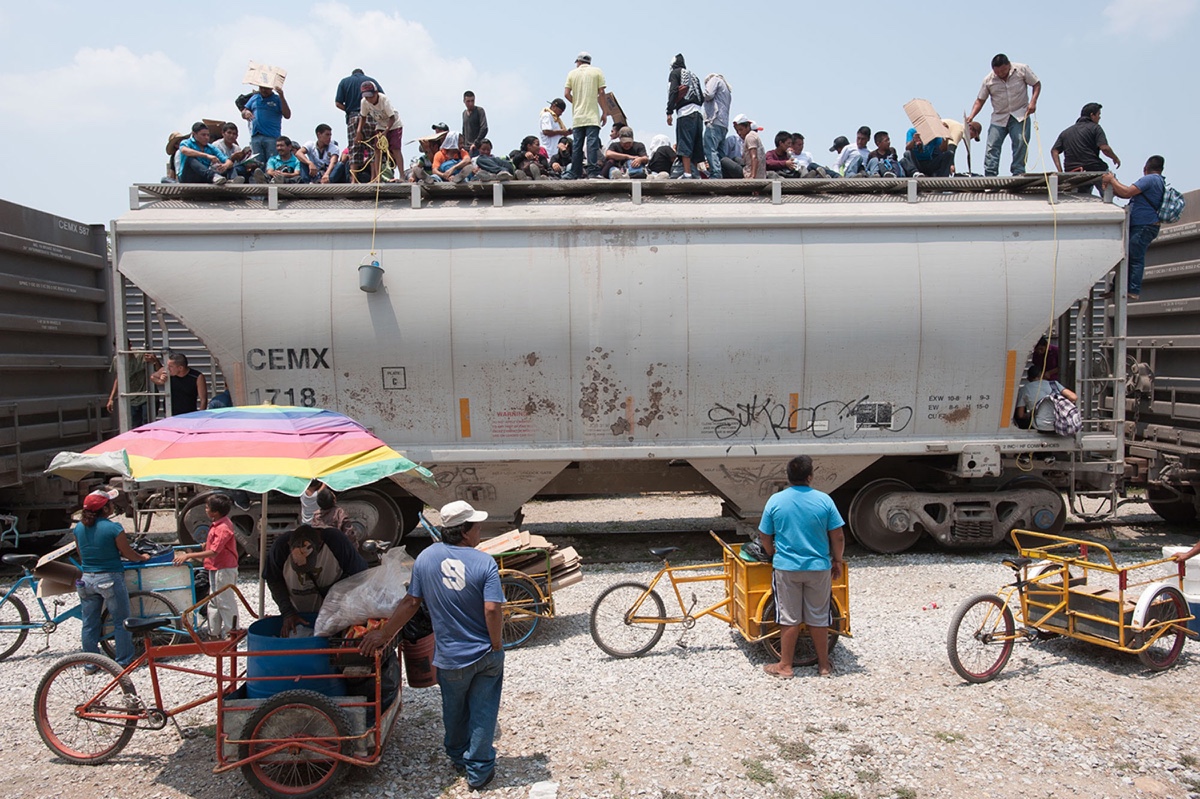 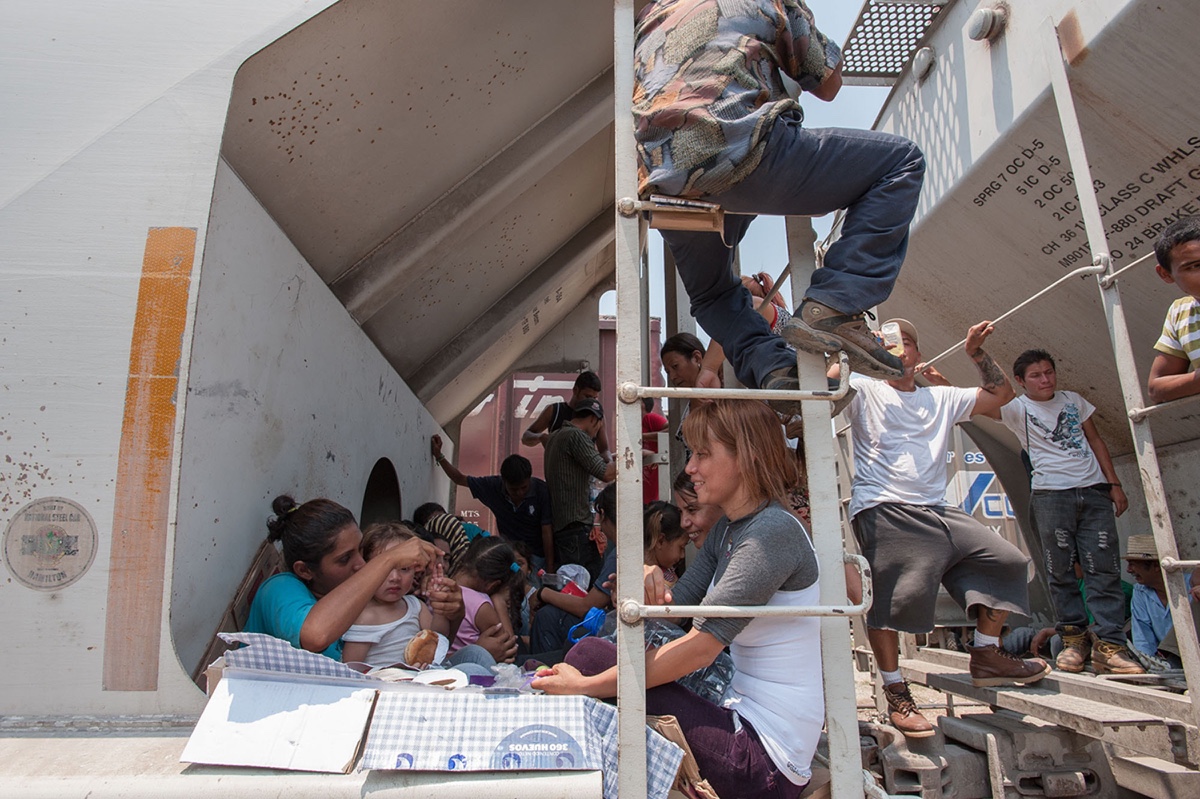 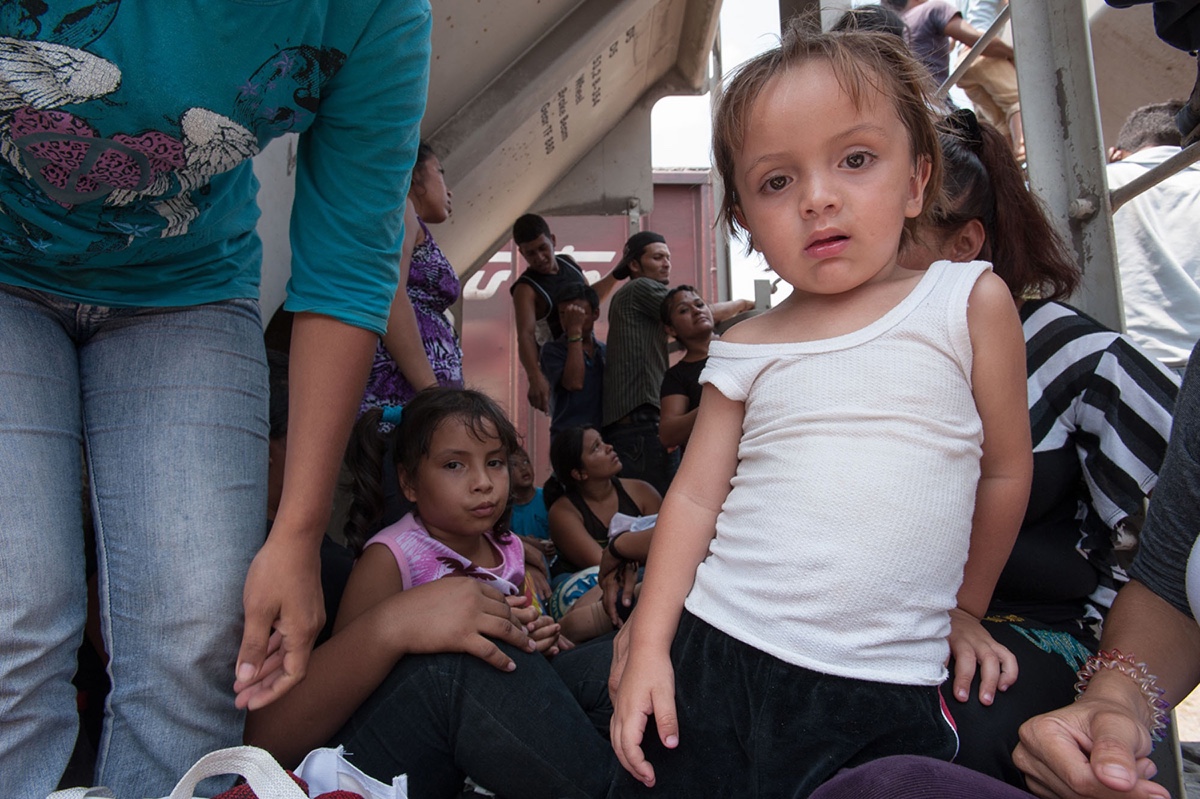 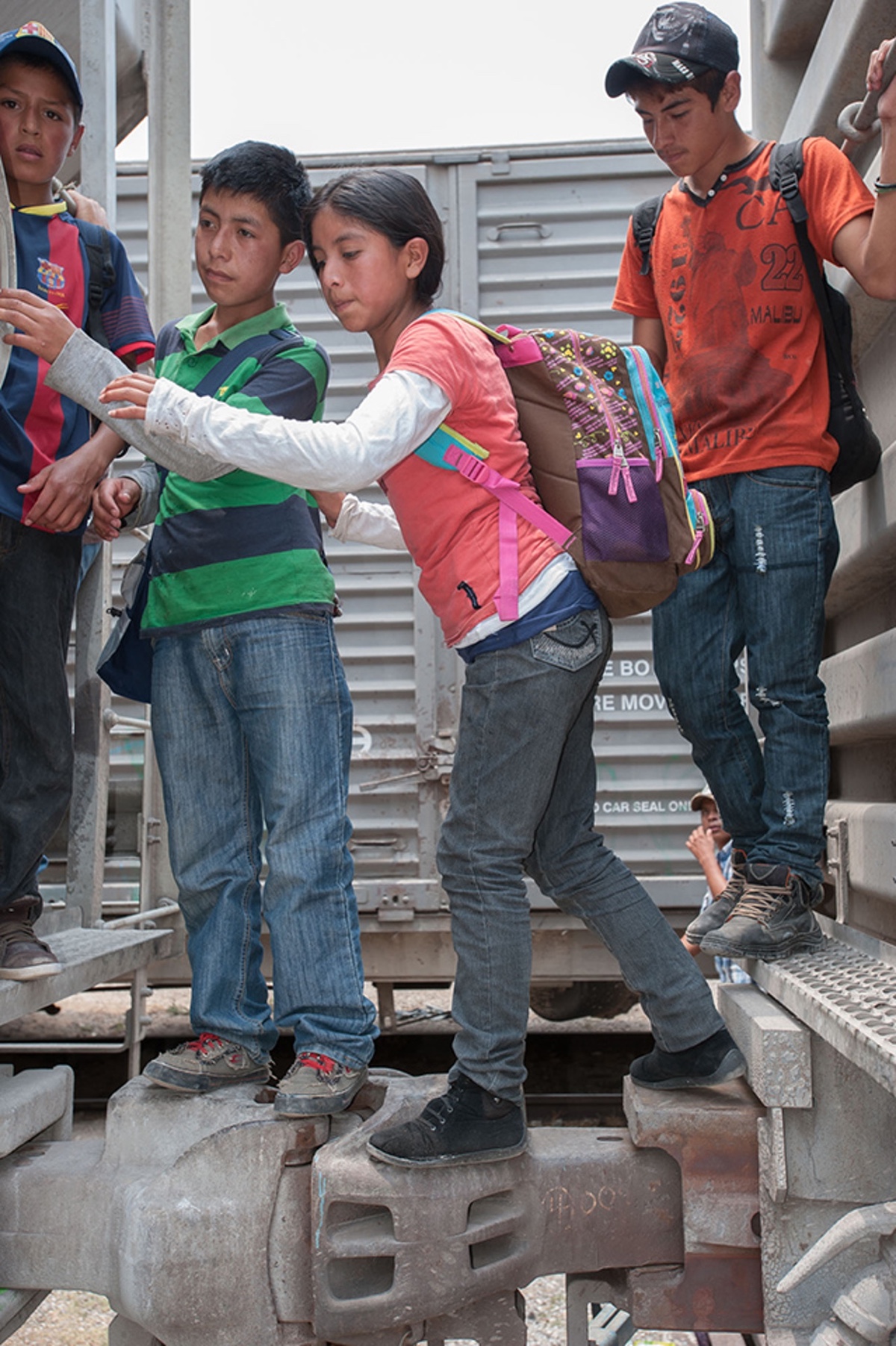 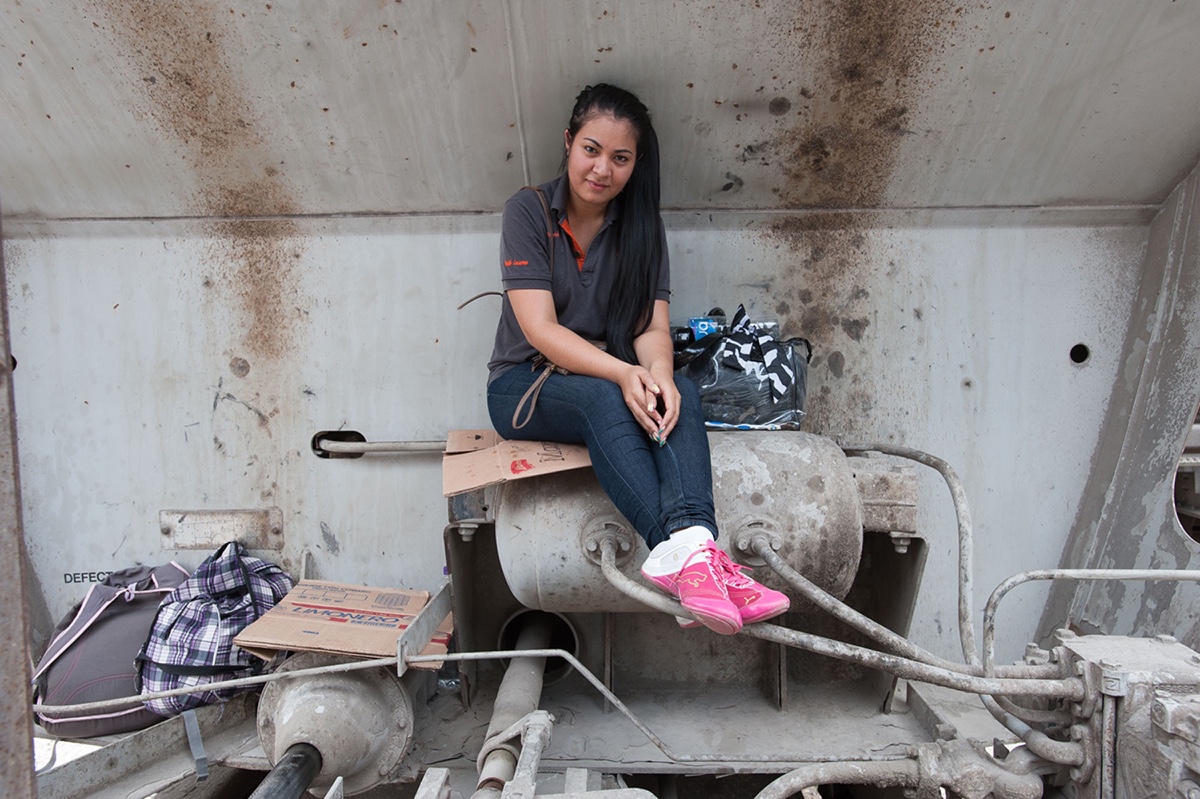 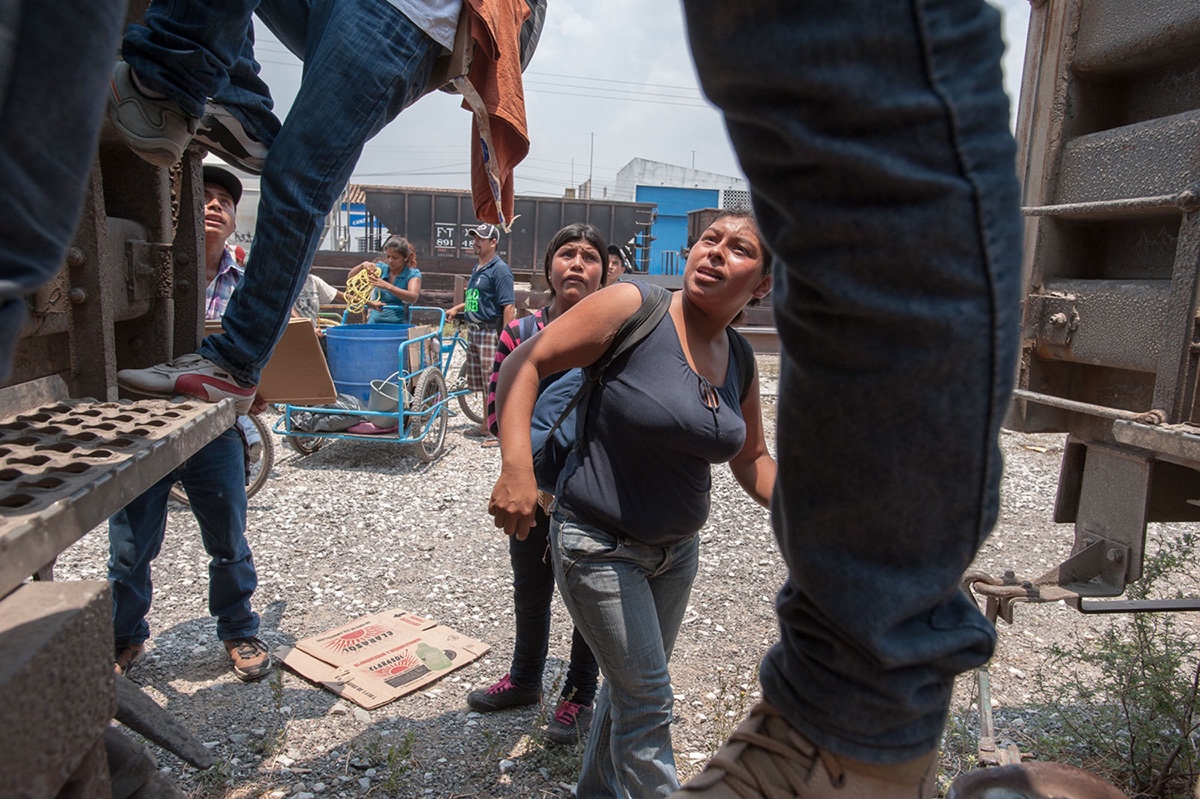 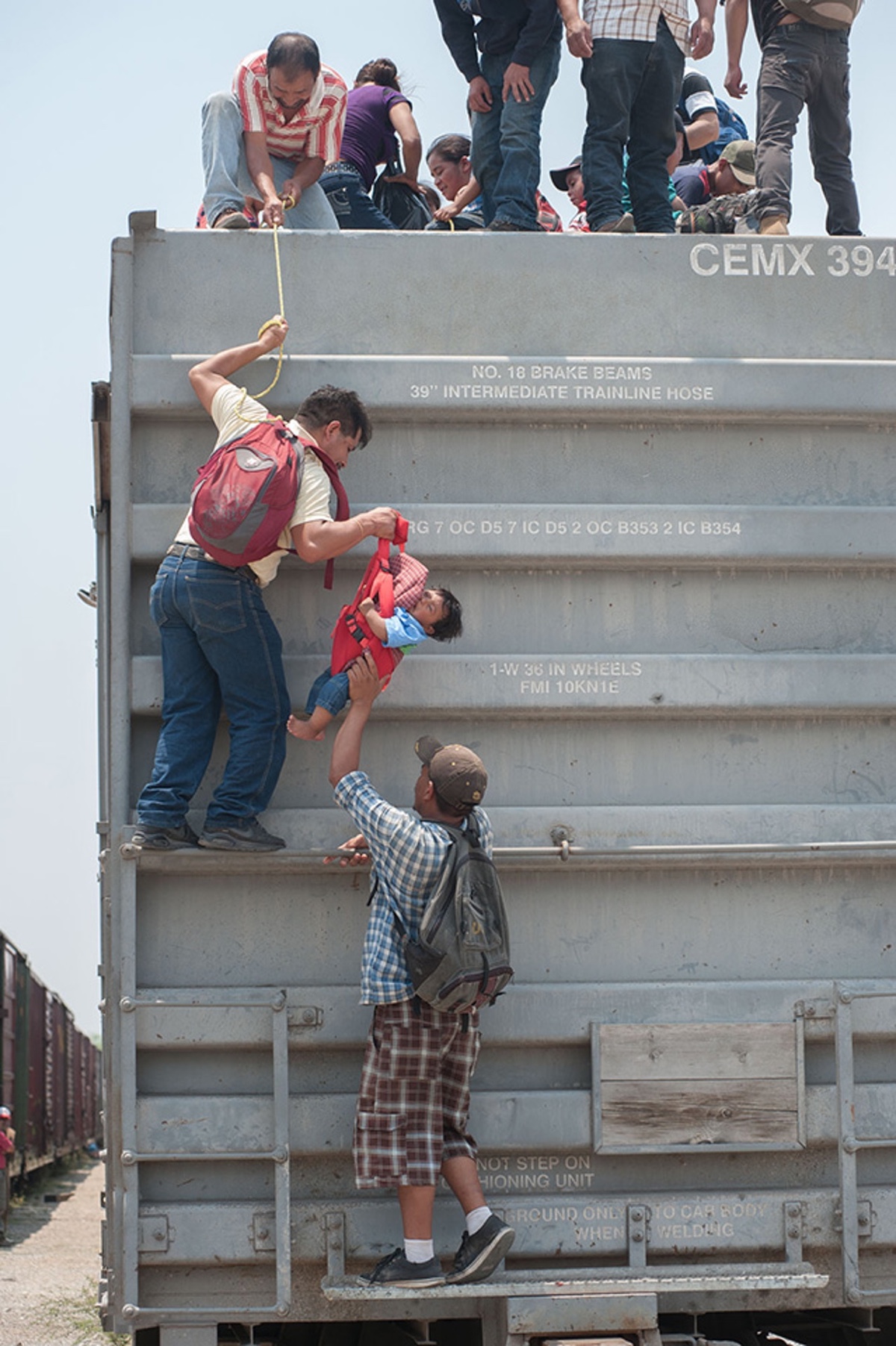 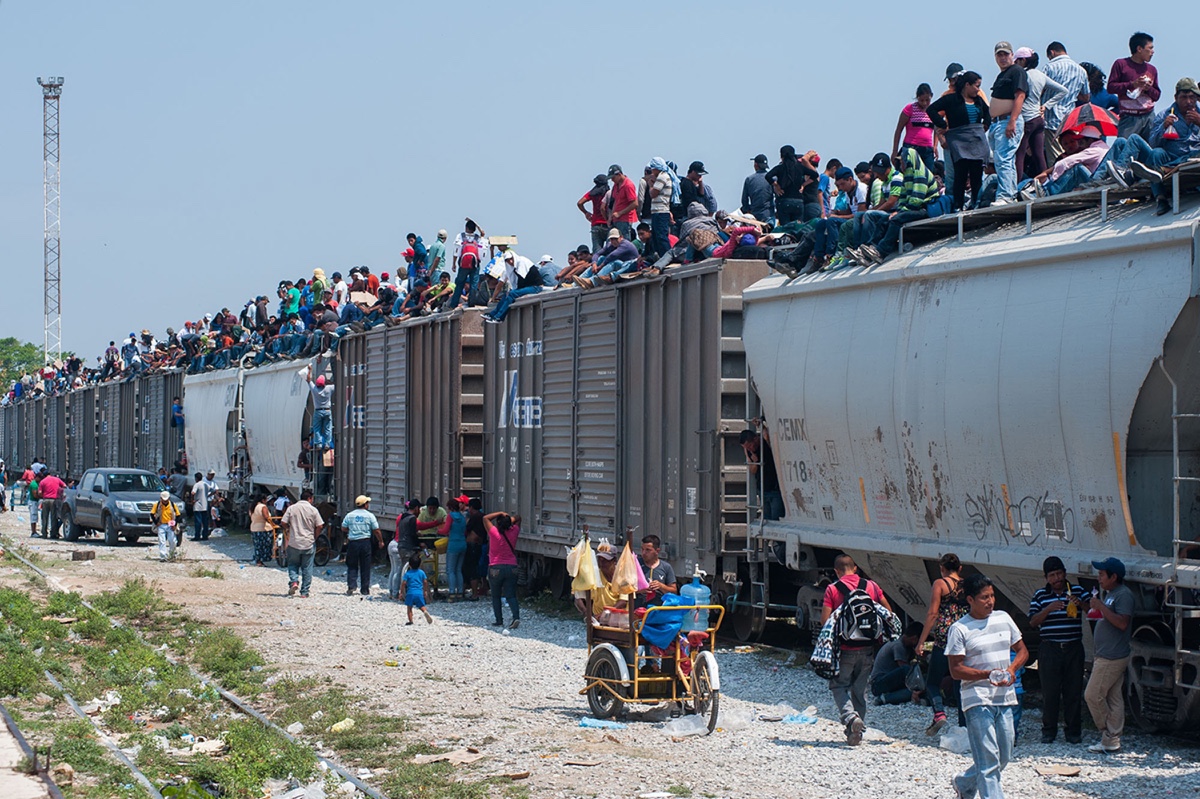